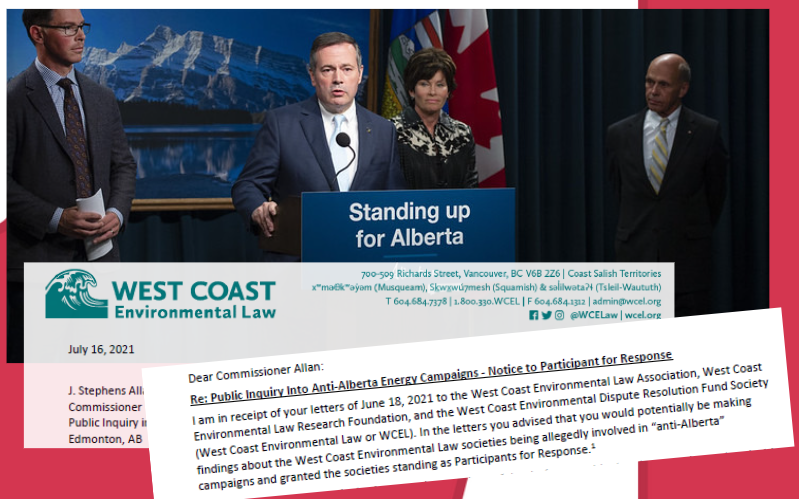 This month, as communities across BC and Canada have faced deadly extreme heat and devastating wildfires, West Coast Environmental Law and a number of other Canadian environmental organizations have been forced to redirect our staff time and energy to deal with another challenge – the Alberta Inquiry.

On the evening of July 1, 2021 West Coast received access to a “secure data room” containing thousands of pages of material gathered by the Public Inquiry into Anti-Albertan Energy Campaigns, and just 11 working days to respond to draft findings about our organizations.

In what has been referred to as an example of “Facebook-era McCarthyism,” the Public Inquiry into Anti-Alberta Energy Campaigns was launched as a political tactic to silence opposition to irresponsible fossil fuel development and distract Canadians from important issues like climate change. Premier Jason Kenny made outlandish assertions about our motives and those of our funders in launching the Inquiry, and from the outset, it implied that environmental organizations like West Coast were involved in shady or improper activities.

Let’s be clear: West Coast was targeted because of the effectiveness of our legal work in stopping the Enbridge Northern Gateway pipelines and tankers project; securing a legislated north coast oil tanker ban; upholding the decision of our Indigenous clients to reject the Trans Mountain project; and holding large-scale greenhouse gas polluters liable for the climate harms they have caused, among other things.

We stand by all of this important work – and our supporters, funders and countless Canadians from coast to coast agree that initiatives like these are critical to ensuring a healthy environment, climate and communities.

Indeed, after reviewing the activities and funding of targeted groups like West Coast Environmental Law, we were recently informed by Commissioner Steve Allan that he had found nothing “that constitutes misconduct on the part of any party that should be viewed as impugnable in any way.”  However, unless he takes heed of our submissions, that apparently will not stop the Commissioner from concluding in his final report (due at the end of July) that a vast array of environmental advocacy activities – from forest protection campaigns in the Boreal and Great Bear Rainforest to children’s climate litigation – constitute “anti-Alberta” activities.

In our submission, we outline several of our objections to the Commissioner’s draft findings, and to the basis of the Inquiry itself. You can read West Coast’s full submission to the Alberta Inquiry here. We have included some key excerpts below.

“West Coast Environmental Law is proud of the work we do to develop legal solutions to protect the environment, to uphold Indigenous rights and ensure that communities have a voice in environmental decisions. As part of this work, we have a mandate, and responsibility, to engage in public dialogue about important issues and policies that affect the health of the environment and communities – including what constitutes “responsible” development of fossil fuels in the face of the climate crisis.”

“The Inquiry defines “anti-Alberta energy campaigns” as attempts to “frustrate the timely, economic, efficient and responsible development of Alberta’s oil and gas resources.” As noted in our submission, we reject the idea that we have participated in such campaigns, because our work aims to ensure timely, economic and responsible decisions regarding oil and gas development, considering the impacts of that development on the environment, climate and public health.”

“Regardless of the findings, this ill-conceived Inquiry undermines free speech and democracy, and it is particularly distressing at a time when Canadians are suffering due to the impacts of the climate emergency that we are working to address.”

No Improper Motivation or Anti-Alberta Intent

“West Coast Environmental Law is a non-profit group of lawyers dedicated to protecting the environment through law.  We have an access to justice mandate and work to ensure that the standards set out in the United Nations Declaration on the Rights of Indigenous Peoples are upheld in environmental decision-making. As set out in further detail below, the principal motivation driving our legal and campaign work is to achieve a more just and sustainable future for all, with a focus on British Columbia where we are based.”

“[E]ven taking as given the limited interpretation of the Terms of Reference reflected in your September 2020 ruling, in our submission, if a campaign is focused on bona fide and transparent motives to ensure that oil and gas resources are not developed in an untimely, uneconomic, inefficient or irresponsible way then it is not an “anti-Alberta energy campaign”.

“Similarly, if a campaign is focused on bona fide and transparent motives to conserve terrestrial or marine ecosystems or to uphold Indigenous rights in relation to those territories, which has an incidental effect of constraining oil sands development (whether timely, economic, efficient or responsible or not), it is not an “anti-Alberta energy campaign” because there has been no “attempt” to constrain oil and gas development”.

“This interpretation of the Terms of Reference is consistent with the Charter’s protection of Freedom of Expression. There is clearly a constitutional right to publicly and transparently express disagreement with the Alberta government on what is responsible development.”

“Given the foregoing, and since you have found that there is no evidence of illegal or impugnable actions, nor suggested that we acted in a manner inconsistent with our organizational purposes, presumably you accept that we are acting on bona fide and transparent beliefs, rather than the ulterior motives alluded to by the Premier in relation to the establishment of the Inquiry. If so, then we submit you must find that West Coast has not engaged in an “anti-Alberta energy campaign” and should be excluded from your report.”

“In the alternative, if you do not agree that the above interpretation of the Terms of Reference is consistent with your September 2020 ruling, then we submit that you have defined those Terms of Reference in a manner that exceeds your jurisdiction and which deprives us of the opportunity to properly counter your characterization of our activities.”

“WCEL also takes great issue with the characterization of our organizations and our activities as “anti-Alberta energy campaigns”.  The Terms of Reference clearly convey some degree of wrongdoing or impropriety with that phrase, which is defined as one who “frustrates” such development “by any means, which may include, by the dissemination of misleading or false information”.

“As a matter of statutory interpretation, examples provided in a non-exhaustive list are meant to illustrate the kinds of things that are covered by the term. In this case, the illustrative example used is “dissemination of misleading or false information”. This implies that the entire term is meant to refer to activities or means that are somehow dishonest, improper or underhanded. The amplifier “anti” contributes to this interpretation. Furthermore, section 2(2) of the Terms of Reference, which elaborates on the mandate of the Commissioner makes references to Russian cyber and social media activities, referring to these as activities “similar or allegedly similar” to “anti-Alberta energy campaigns”.”

“In this context, WCEL’s position is that you have exceeded your jurisdiction by essentially defining any sort of advocacy concerning the impact of oil and gas development on climate change (and indeed any conservation activities that may incidentally have some affect on Alberta oil and gas development) – regardless of the legitimacy, scientific merit or good faith of those activities – as being inherently “anti-Alberta”.

“WCEL is deeply concerned that you have applied an unreasonably and unlawfully loose standard of admissibility for the evidence you rely on. While it is recognized that public inquiries are not subject to the same strict rules of evidence as a court, that does not mean that “anything goes”. “

“Based on WCEL’s review of your draft report, it is apparent there are several examples where you have simply relied on newspaper stories, which are inherently hearsay, as well as other documents from various sources on internet – some of which are inherently unreliable.”

“In our submission, you should review your report in detail, and remove any references to information that cannot “fairly be regarded as reliable”. Your final report should also explain how you found other evidence to be admissible, in accordance with the legal standards described above.”

“This Inquiry is fundamentally about one of the most crucial and fundamental freedoms protected by the Canadian Charter of Rights and Freedoms. Your inquiry is explicitly targeted at the expressive activities of organizations challenging oil and gas development that contributes to climate change, an “existential threat to human life in Canada and around the world” (paragraph 171).  The political responses to this existential threat are matters of legitimate concern to all Canadians, and in a free and democratic society all Canadians have the right to be heard on these issues.”

“Ultimately, most of the legal uncertainty faced by resource companies who violate Indigenous rights can be resolved by obtaining the free, prior and informed consent of impacted Nations, as stated clearly by the Supreme Court of Canada in Tsilhqot’in.”

“Constitutionally protected rights like Aboriginal title and rights exist to protect against the tyranny of the majority – that means for a linear project like a pipeline, transmission line or railway, consent must be obtained from all communities along the route – it is not a referendum.”

“Indigenous self-determination involves more than economic participation in oil and gas projects, it includes the right to decide, return of land, and reparations.”

“WCEL supports and is guided by the full implementation of the United Nations Declaration on the Rights of Indigenous Peoples, and the 94 calls to action identified by the Truth and Reconciliation Commission. We recognize that this is an ongoing journey of learning and unlearning as we continue to decolonize our practices.”

“As noted, since the Inquiry has not demonstrated that West Coast Environmental Law engaged in an “anti-Alberta energy campaign” the sources of our funding are irrelevant to the Inquiry and all references to West Coast should be removed or redacted, and any amounts associated with West Coast removed from the totals.”

“In our submission, it follows that the tables included at paragraphs 429 and 437 [respectively all international funding received by Canadian groups for environmental initiatives of any kind from 2003-2019; and grants for any purposes to targeted environmental groups from certain foundations] and related commentary should be excluded from the final Inquiry report as irrelevant. This information serves little purpose other than to encourage readers to incorrectly conflate overall international funding with the actual focus of the Inquiry on a very limited subset of funding, that to so-called “anti-Alberta energy campaigns.”

“Based on all of the above, West Coast Environmental Law submits that you have erred in determining that WCEL has participated in an “anti-Alberta energy campaign” as defined in the Terms of Reference. We further request that any reference to West Coast Environmental Law participating in an “anti-Alberta energy campaign” be removed from the Inquiry report along with the other amendments requested throughout these submissions.”

Commissioner Allan is due to complete his report and submit it later this week. With the Inquiry’s final deadline upon us, we hope that the Government of Alberta will finally back away from its fruitless attacks on environmental organizations, and focus on the urgent work that is required to protect communities from climate change and a just transition to a clean energy economy.