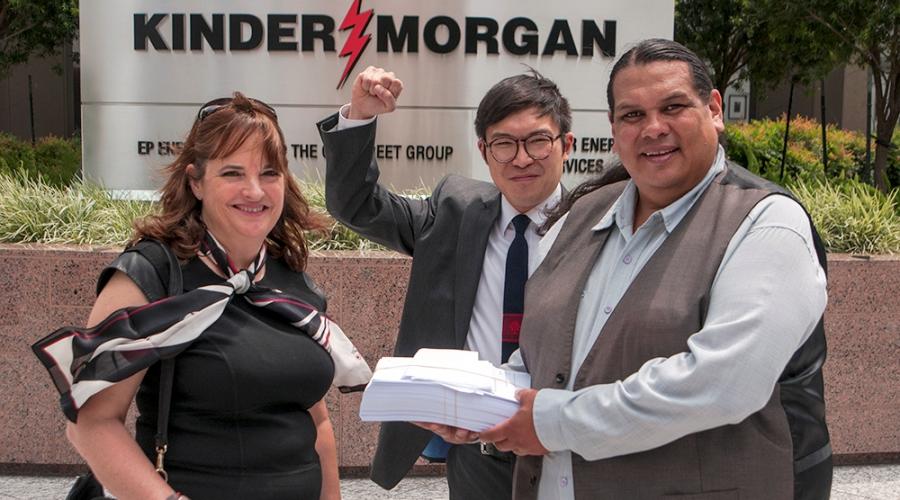 The Trans Mountain Expansion Project is all risk, little reward for BC and the coast. Find out what we’re doing to stop it.

The Trans Mountain Expansion Project aims to construct a new tar sands pipeline across British Columbia, tripling the amount of diluted bitumen flowing from Edmonton, Alberta to Burnaby, BC.

Initially proposed by Texas-based Kinder Morgan, the expansion would increase oil tanker traffic passing through Burrard Inlet and the Salish Sea by seven times – from about one tanker per week to more than one per day. It would also require doubling the storage capacity at the company’s oil tank farm on Burnaby Mountain.

Similar to Enbridge’s Northern Gateway project, Trans Mountain faces massive opposition from affected First Nations, local communities and municipal governments who bear most of the risk of an inevitable spill. The pipeline and tanker route passes through some of BC’s most densely populated areas – including Vancouver, Victoria, Kamloops and the Fraser Valley.

Expert reports have found that a large tanker spill in the Salish Sea could result in more than $380 million in losses to the local economy and cost $9.4 billion to clean up. A spill could make over one million residents sick within hours, and a worst-case spill in the Fraser River estuary could kill up to 500,000 birds.

Following a flawed and controversial process, Canada’s National Energy Board (NEB) recommended the approval of the Trans Mountain Expansion in May of 2016. The federal Cabinet approved the project in November 2016, largely based on the NEB’s recommendation. The Province of British Columbia announced its approval in January 2017.

17 legal challenges filed against the NEB process and Cabinet approval were heard by the Federal Court of Appeal in the fall of 2017. On August 30, 2018, the Court quashed the project’s approval based on inadequate consultation with First Nations, and a failure to follow the Canadian Environmental Assessment Act, 2012.

In the meantime, the federal government opted to buy the Trans Mountain pipeline in May 2018 for $4.5 billion, after Kinder Morgan had decided to abandon the project. This federal buyout ignored the legal risks associated with the ongoing court challenges and in obtaining free, prior and informed consent from Indigenous communities along the route.

Six First Nations were granted leave to appeal the new approval in September 2019, but the Federal Court of Appeal upheld the government's decision, and in 2020 the Supreme Court of Canada dismissed further appeals. You can view a timeline of the legal challenges over Trans Mountain here.

West Coast will continue to fight Trans Mountain by supporting our Indigenous clients in their legal efforts; by continuing to revitalize, apply and enforce the Indigenous law decisions to ban the project; and by working with the climate justice movement around the world.

As demonstrated by the fight against Enbridge, when communities stand together with First Nations, we can stop tar sands pipelines.

For our latest updates and analysis on the Trans Mountain project, check out our recent blog posts here.