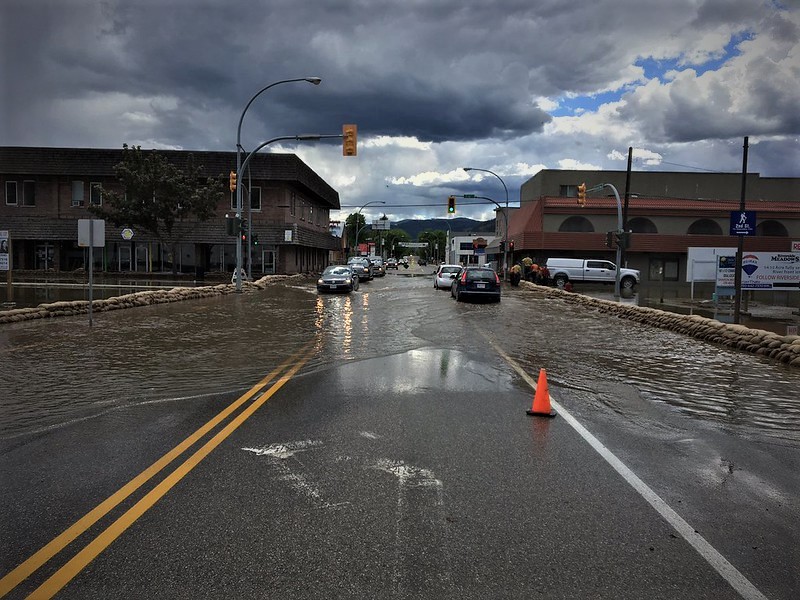 The BC government is developing a “climate preparedness and adaptation strategy to help ensure that communities across BC can prepare for a changing climate.” Now the government wants to hear from you about how climate change is affecting you, and what needs to be done to prepare in your community. You can have your say until January 10th, 2020 at 4pm.

The government’s consultation web pages and survey focus on how British Columbians see climate change harming them – now and in the future. No mention is made of the many examples of climate adaptation already occurring throughout BC, led by the provincial and local governments, as well as others.

Many local governments have already developed – and are implementing – climate adaptation plans. The Ministry of Transportation and Infrastructure (MOTI) now incorporates climate change modelling into road projects. The Ministry of Health has started identifying climate impacts and suggesting how health authorities can prepare for them.

What’s missing is leadership from the Province to develop a coordinated, comprehensive, measurable and transparent strategy to help weave these different pieces together and identify and fill the gaps.

A provincial strategy should commit the government to incorporate climate adaptation into its many responsibilities that are clearly at the heart of adaptation (land, water, roads, bridges, terrestrial and aquatic species, energy, housing, etc.). The strategy should also start looking at how the Province will help our natural ecosystems remain resilient as the climate changes – a huge gap in the planning that’s been done so far.

Local governments are on the frontlines of climate change, but expecting them to manage a changing climate within the confines of municipal boundaries, local politics and limited funding is short-sighted and unrealistic.

Consulting with BC residents about our collective future is important, but it should be about more than hearing anecdotes and fears from individual British Columbians. While the consultation will apparently result in an “intentions paper” outlining specific strategies, to be released in the new year, there’s little substance provided for the public to comment on now.

Please join us in encouraging the Province to develop a strategy that is actually strategic and provides real direction to future government decision-makers, by:

What to look for in a “climate preparedness and adaptation strategy”

The BC government’s efforts to prepare a new climate adaptation strategy are at least partly the result of last February’s Managing Climate Change Risks report from BC’s then Auditor General, Carol Bellringer.

Ms. Bellringer noted that the province’s 2010 adaptation plan had not been updated in almost a decade and was missing a lot of information that would have been expected in an adaptation plan, such as:

Ms. Bellringer is 100% correct. To be useful, BC’s climate adaptation strategy needs to help government identify who will be addressing which risks, by when. We need to know the costs – including the social and environmental costs, which might not have a dollar value – that we are likely to face if adaptation does not occur, and the costs that we will incur making our communities more resilient.

There are already some large estimates on the table: $6.7 billion to treat the province’s 800,000 hectares of high- and moderate- risk wildfire interface areas, and $9.5 billion to upgrade sea dikes and other coastal defences in Metro Vancouver alone, to protect against rising sea levels. How are these costs and needed actions going to be addressed, and over what timeline?  When will implementation of the plan be completed?

And those are just two of the many climate adaptation costs that BC faces. BC’s Preliminary Climate Risk Assessment, released last July, identified 15 risk scenarios for their likelihood and consequences, a majority of which would have catastrophic economic consequences for the province. This Risk Assessment was intended to “support development of the provincial climate adaptation and preparedness strategy,” but the province hasn’t said when or how this new assessment is intended to be used at the community level.

What to tell the government

The current public consultation leaves open the content of the government’s proposed climate preparedness and adaptation strategy. It does not ask British Columbians to comment on the scope, or an approach to prioritizing risks or assessing social and economic costs associated with climate change.

Instead, the government’s survey focuses on specific climate impacts experienced by the respondent and their perception of future risks. It is difficult to see how this public feedback can meaningfully guide the government in a credible assessment of social and economic costs or how to address them.

While there is no harm in letting the government know how climate change is affecting your community, British Columbians deserve a climate adaptation strategy that will guide us towards a safer future.

1. Ensure that BC has the information needed for effective climate adaptation planning and decision-making, with regular updates.

Good planning requires good information – about what our current vulnerabilities are and how those will change due to climate change. BC has made a strong start through the work of the Pacific Climate Impacts Consortium (PCIC) and other experts who have told us how the regions will change.

However, we still need more information about how this translates into vulnerabilities across BC. For the most part, the Province has left it up to local governments to assess risks, but this means there are gaps, and regional approaches are missing. This becomes particularly clear in the context of flood and wildfire risks, where resources and capacity vary among local governments.

Downloading responsibility to local governments also means that the vulnerabilities of Indigenous communities adjacent to municipalities and elsewhere are getting left out of assessments, and those vulnerabilities may even be exacerbated by local adaptation measures elsewhere in the region. At a broader scale, Indigenous peoples have deep knowledge about managing the land and water in their territories and how conditions are changing. This information is highly relevant for climate change adaptation, and it makes sense for the Province to work together with Indigenous nations to understand risks and develop solutions.

To date the Province has done relatively little to assess ecosystem vulnerability, as we have discussed elsewhere. It also isn’t clear how comprehensively the Province has assessed climate impacts and risks across different sectors. Are mines tailings ponds built to withstand extreme rains, for example?

Tell the BC government that it needs to invest in getting quality information for the entire province, and at the appropriate scales, to guide climate adaptation.

2. Co-develop and implement the strategy with Indigenous peoples in a manner that meets BC’s legislated commitment to implement the United Nations Declaration on the Rights of Indigenous Peoples (UNDRIP), including specific financial and other support to Indigenous communities for climate adaptation.

Adapting to climate change involves making changes to provincial management of land and water, to name just two areas where there is a clear intersection with the implementation of UNDRIP. While the Province is now committed to change its laws to become consistent with UNDRIP, this will take time. The Province can’t assume that existing provincial authorities (and delegated authorities, like local governments) will act consistently with UNDRIP in developing adaptation policies and measures, because they are operating in legal and policy frameworks that reflect colonial values.

Tell the BC government you want a de-colonized climate adaptation strategy.

As the Auditor-General noted, making progress on adaptation depends on having clear deliverables, and defined roles and responsibilities.

Each region of the province will face different climate impacts and will have different ideas about how adaptation should occur. Consultation and collaboration may be most effective at a regional level. The province should work in a government-to-government relationship with Indigenous nations, as well as in cooperation with local governments and other stakeholders, to develop regional climate adaptation plans.

Tell the BC government that you want to see regional climate adaptation plans that lay out who’s going to do what, and when, and how they are going to communicate with the public.

4. Assess the costs of climate adaptation needs and choices in a transparent and credible way.

What gets measured gets managed. And when it comes to adaptation, we need to understand the costs, benefits and risks of different adaptation measures. Some of this work is being done at the local level, but the information is not necessarily being gathered in a consistent or transparent way.

Most economic modelling approaches have limitations, and these need to be clear. For example, in an assessment of potential impacts from extreme weather, the costs of physical damage may be included, but not economic and other losses from the time lag of recovery. Or modelling might consider the cost of raising a sea dike, but not the increased vulnerability that results from more intense land use nearby based on a false sense of security.

As well, there are social and environmental costs that are hard to capture in dollar terms, like the damage to coastal ecosystems from dikes. This is probably why, in part, we have seen less consideration of ecosystem and social vulnerability.

Tell the BC government you want to see a commitment in the climate adaptation strategy for robust assessment of climate costs and adaptive measures so that we can have informed public engagement around decision-making.

5. Make a commitment to support and fund innovation through research and pilot projects, including nature-based adaptation at infrastructure scales.

One of the reasons we are so vulnerable to climate change impact is because of where and how we have built our communities: along the coast, in floodplains, next to forested areas, on steep slopes. To protect ourselves, sometimes we rely on structural protection like dikes and sometime we rely on statistics (e.g. relatively rare flooding or drought events) and luck. Simply reinforcing these existing approaches may not be our best options, as we see more extreme weather events over time.

It’s time to consider doing things differently, like working with nature instead of against it. There is a growing body of research and practice around “nature-based adaptation,” such as relying on wetlands to absorb wave energy along the coast, or restoring natural river floodplains, and pulling development back to safer places. But these approaches need to be tried and tested – and that takes resources.

Existing mechanisms for funding infrastructure projects are usually not compatible with the different needs for collaborative design, active experimentation, adaptive management and longer monitoring periods for these types of projects – even if they can turn out to be more cost-effective over the long term and offer multiple benefits.

Tell the BC government that our climate adaptation strategy needs to include funding for applied research and on-the-ground implementation of nature-based adaptation.

While local governments or community organizations may take on specific adaptation projects, the Province must ultimately be responsible for ensuring that British Columbians are kept safe from the impacts of climate change.

Tell the BC government you expect it to lead on climate change adaptation in partnership with Indigenous nations.

Write to the BC government

The BC government has asked you for stories about how climate change is affecting your community, but we think they’re asking the wrong questions. The government needs to hear more broadly that British Columbians want a strong plan that will ensure that our communities can withstand the impacts of climate change.

Photo credit: BC Ministry of Transport