News & Events » Environmental Law Alert Blog » Bill 41: A new law to uphold Indigenous rights in BC
Back to top

Bill 41: A new law to uphold Indigenous rights in BC 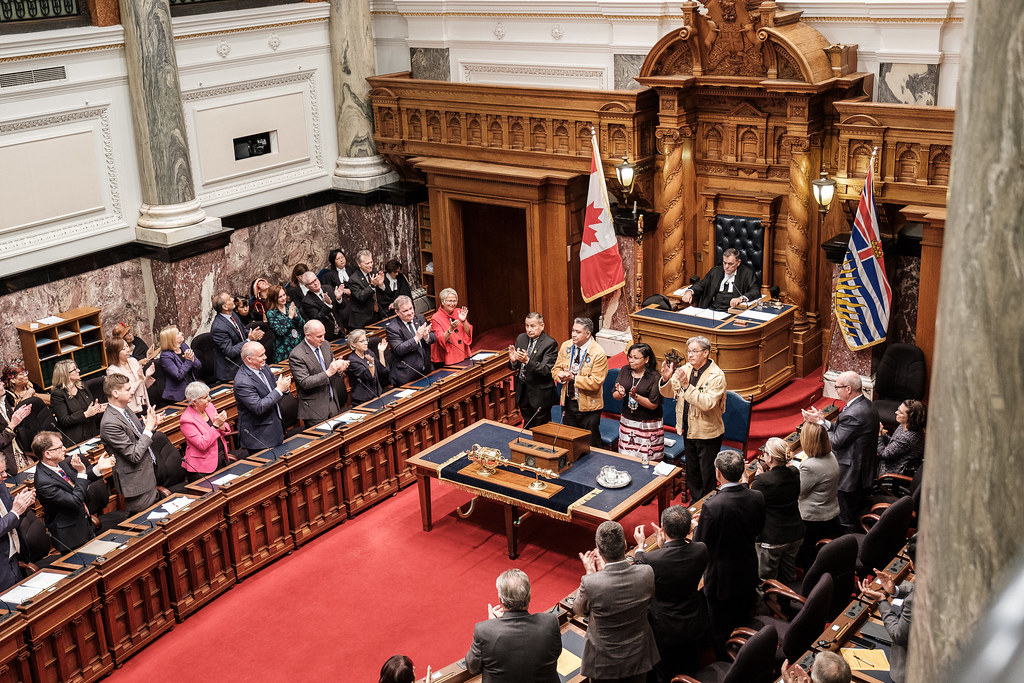 The excitement and anticipation from the public viewing gallery at BC’s legislature was palpable. Along with dozens of invited guests, untethered from our phones (separation anxiety!), we witnessed history, as Lekwungen dancers and singers opened the day, and Scott Fraser, Minister of Indigenous Relations and Reconciliation introduced Bill 41 – the Declaration on the Rights of Indigenous Peoples Act.

It has been called ‘historic’ and ‘momentous’ because with the passing of Bill 41, BC will be one of the first jurisdictions in the world to take legislative action to implement the United Nations Declaration on the Rights of Indigenous Peoples (the “UN Declaration”). A similar federal Bill – C-262, introduced as a private member's bill by former MP Romeo Saganash (who was in attendance at the BC Legislature) died at the Senate in May of 2019 and has not yet been reintroduced.

There has been a lot of speculation and fear mongering about Bill 41, and about the implementation of the UN Declaration in general. As Cheryl Casimir stated in her speech: “The sky didn’t fall.”

What does the legislation do?

Developed collaboratively with the First Nations Leadership Council – which was mandated to do this work by resolutions from the member nations of the Union of BC Indian Chiefs, the First Nations Summit, and the BC Assembly of First Nations – Bill 41 is a framework for the implementation of the UN Declaration in BC. It provides four ways for this to happen:

Second, Bill 41 requires the government to prepare an implementation and action plan in consultation and cooperation with Indigenous peoples, with a timeline for reviewing the plan and a requirement to make that plan public. This builds transparency and accountability into the action plan. The contents of the action plan will also allow for more certainty and predictability for all moving forward and an opportunity for citizens to hold our government to account.

Third, Bill 41 requires the preparation of an annual report, to be published by June 30 of each year, setting out the progress made towards implementing the measures taken to align BC’s laws with the UN Declaration. Again, this measure of transparency and accountability will provide more certainty moving forward. Demonstrable follow-through on the action plan should in turn help create the conditions for increased trust and reduced conflict.

Finally, Bill 41 provides that the provincial  government and Indigenous governing bodies may, through a negotiated agreement, provide for certain statutory decisions to be made jointly, or require the consent of Indigenous governing bodies before a statutory decision, like a project approval, is made. Like the sections above, there are transparency and accountability measures baked in to the legislation: the commencement of negotiations and consultations will be made public, and any agreements reached will not come into effect until they are published in the Gazette.

What does this mean for Indigenous peoples and the environment?

West Coast applauds BC as one of the first jurisdictions in the world to take legislative action to ensure that the UN Declaration on the Rights of Indigenous Peoples is recognized and upheld in its laws. By recognizing Indigenous peoples as decision-makers with inherent jurisdiction, who have stewarded their territories for millennia according to unextinguished Indigenous laws, BC has set a course for better and more sustainable decisions for all.

One key point is that the legislation allows the government to make agreements with Indigenous governing bodies outside of those defined in the Indian Act, or registered societies. This is important to implementing the UN Declaration’s direction that consultation and cooperation with Indigenous peoples should occur through “their own representative institutions” as recognized and understood by them (see e.g. Article 32). This may include hereditary leaders or families who are title holders within their own legal tradition, or groupings of Indigenous nations working together at a tribal level.

On the widely misunderstood concept of consent: many of the speeches and comments from provincial and Indigenous leaders confirmed that Bill 41 does not amount to a “veto” – a term frequently used by industry and others who fear that upholding the Declaration will prevent all resource development projects from being approved.

The UN Declaration requires that governments “shall consult and cooperate in good faith with the Indigenous peoples concerned through their own representative institutions in order to obtain their free, prior and informed consent” before adopting laws or approving projects that may affect them (Article 19 and 32). In many cases, this requirement is misconstrued as a “veto” over projects or proposals that do not have Indigenous consent.

But veto and consent are different concepts: Veto is about unilaterally overriding a decision made by someone else, whereas consent means recognizing that the consenting party has self-determination to make an informed decision about a matter affecting them.

It is interesting that this confusion does not happen in other contexts where consent is used: in sexual violence, we would never say that a victim ‘vetoed’ the aggressor’s advances by withholding consent; in the medical context, we would never say that a patient ‘vetoed’ a doctor by refusing consent to a medical procedure. This is because these actors do not have the authority to unilaterally decide on what to do with the patient, or victim’s body.

In the BC context, the minimum human rights standards of the UN Declaration affirmed by Bill 41 mean that the Crown government cannot unilaterally decide on what to do with the territories and homelands of Indigenous people who have never ceded control. The Declaration Bill provides a mechanism to include Indigenous peoples as partners in decision-making processes, rather than having decisions imposed on them and then challenged in courts, as is often the case today.

If implemented well, the Declaration Act has the potential to provide much more transparency and certainty for all moving forward, resulting in better long-term decisions, and avoiding endless and expensive court battles.

For another take on the legislation and what it does, see this tweet thread by Squamish Nation Councillor Khelsilem.

The hard work is still to come. The success and impact of Bill 41 will come down to how it plays out: how will current and future BC laws be tested as compliant with the UN Declaration? What will the action plans include? What agreements will be reached?

What is clear is that the current system isn’t working for anyone: approvals and decisions affecting Indigenous territories regularly get overturned by the Courts (at least 275 cases in recent history). That means that the certainty that industry wants does not currently exist.

In this context, Bill 41 presents the opportunity for the province to reach high-level and strategic agreements with Indigenous governing bodies, and to reduce conflict at an operational level (see Haida at para 76). This could include new co-governance arrangements and regional strategic planning, such as land- and marine-use plans that can take into account cumulative effects in a holistic way.

With the climate emergency quickly reaching crisis levels, it is this type of vision that will allow for better, more sustainable decisions, while also providing more certainty for all.