Preserving biodiversity means protecting our fish from a thousand cuts 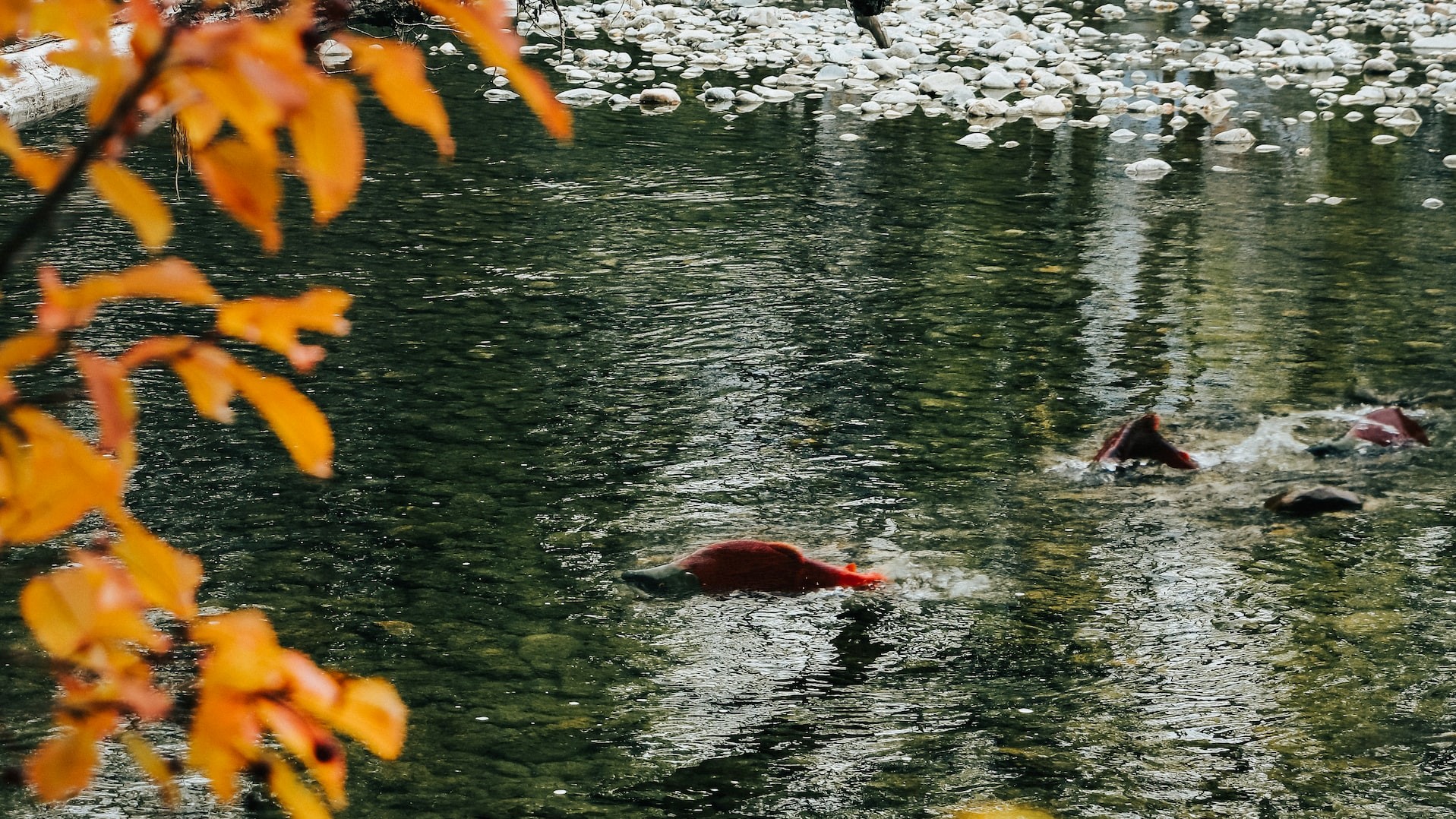 At the recent UN Biodiversity Conference (COP15), Canada joined other countries in making ambitious commitments to protect nature. Following through on these commitments will require new approaches, like Indigenous Protected and Conserved Areas (IPCAs) and bigger investments in Marine Protected Areas (MPAs), but there are also ways that existing Crown laws can, and should, be used more effectively to protect biodiversity.

One example is the Fisheries Act, which was strengthened by Parliament to better protect fish and fish habitat back in 2019. At West Coast we are concerned that the federal government isn’t fulfilling its current legal requirements. The Fisheries Act and the government’s failure to implement it property is a part of the biodiversity protection story that needs more attention, because it shows how decision-making by regulators routinely enables ongoing harm that adds up across watersheds, largely without accountability.

It’s easy to think that massive industrial projects are the only cause of declining biodiversity and species and ecosystem health, and that “ordinary” or “small” developments have a negligible impact. But in reality, the health of our ecosystems is often threatened by the collective impacts of many smaller developments.

Some background on the Fisheries Act

Back in 1977, Canadian legislators introduced wide-reaching protection for fish and fish habitat through amendments to the federal Fisheries Act, which had previously been more focused on fisheries management and direct harm to fish. It was a recognition, somewhat belatedly, that fish need habitat to survive, and that urban, rural and industrial development were all having big and negative impacts on waterways and riparian habitat. This legislation was very good news for fish: it gave broad legal protection to fish and fish habitat, designated offences for causing harm to fish and fish habitat in various ways, and as a federal law it applied across Canada.

Despite some efforts by the federal department responsible for the Fisheries Act (now known as Fisheries and Oceans Canada, but often still referred to as “DFO”) to develop the scientific and enforcement capacity needed to ensure compliance, there was evidence from auditors and researchers that DFO was not achieving the purposes of the Act. What’s more, there was a progressive de-funding of DFO and its habitat protection activities over time, particularly after the 1990s.

In addition, the broad application of the Fisheries Act across the landscape meant it was challenged and sometimes simply disregarded on many fronts, by utility operators, farmers, mining companies, pipeline operators, port operators, urban developers, shoreline property owners…it’s a long list.

In 2012 the federal government was persuaded by industry and others to gut the habitat protection provisions in the legislation. At the same time there was an even deeper erosion of budgets and resources for the department.

The story takes a happier turn for fish and fish habitat in more recent times, at least regarding the law itself. In 2019, Canada effectively re-committed to protecting fish and fish habitat. The earlier broad provisions were restored, and there were new provisions added, including a public registry, direction on working with Indigenous peoples, a five-year reporting obligation, and a new list of factors to consider in making regulations. And, in case there was any doubt, “the protection and conservation of fish and fish habitat” was added as an explicit purpose of the Act. West Coast celebrated the 2019 legislative amendments and looked forward to their implementation through regulations and policy.

2019 brings consideration of cumulative effects into the Fisheries Act

Regulations are the necessary backbone for policy and implementation, and determine – or at least should determine – how DFO does its work on a day-to-day basis by translating the higher-level objectives of laws into practice. In 2019, Parliament updated the Fisheries Act with specific factors to be considered in making regulations and in other decision-making related to fish and fish habitat protection.

One factor that must now be considered by the Minister of Fisheries and Oceans in making regulations and other exercises of power is:

the cumulative effects of the carrying on of the work, undertaking or activity referred to in a recommendation or an exercise of power, in combination with other works, undertakings or activities that have been or are being carried on, on fish and fish habitat (s.34.1(d)) [emphasis added]

As we’ve explained elsewhere, and researchers have documented, this amendment to the Act was needed because previous “risk-based” regulatory and decision-making approaches from DFO had led to systemic tolerance for smaller-scale harms that cumulatively added up to big impacts on fish habitat, without accounting for ecological thresholds – what is often referred to as "death by a thousand cuts.”

As one respected researcher has said:

The implicit risk management decision to focus on large projects fails to take account of the high frequency of smaller projects whose aggregate impacts likely outweigh those of large projects. For example, it is highly likely that much more habitat area has cumulatively been impacted by roads and housing developments in Canada than in all the mineral, oil, and gas developments.

Last year DFO released a draft “Position Statement on the Consideration of Cumulative Effects on Fish and Fish Habitat in Support of Decision-Making under the Fisheries Act.” We are very concerned that this policy fails to support the work needed to implement the 2019 changes to the legislation. The rest of this post summarizes our submission to DFO regarding this position statement.

First, the Position Statement limits itself to considering cumulative impacts related to decision-making about projects that are being considered for site-specific authorizations to harm fish or fish habitat under the Act. These could be projects like channel realignment, marine terminal expansion, highway widening and others. Unfortunately, this leaves out the majority of smaller projects, which qualify for streamlined processes and might even bypass the authorization process entirely.

Yet research has shown that such projects, which usually involve smaller-scale impacts on stream channels and riparian habitats, can add up to significant residual harm. The same study found that, in the period 2015-16, DFO did not require an authorization for more than 3,000 of the projects referred to it by project proponents, even though the referral meant the proponent had determined through self-assessment that there was a risk of serious harm. All of those projects would be outside any consideration of cumulative effects by DFO.

This narrow focus also fails to address the making of the regulations that guide authorizations, for example, such as the Prescribed Works and Waters Regulation that DFO will soon be implementing. This regulation will effectively set out benchmarks for obtaining authorizations; that is, they make the authorization decision in advance for specified types of projects, assuming a project proponent follows the regulatory requirements. Under the law, as drafted, before the Minister recommends regulations like these to Cabinet, she should consider the cumulative effects on fish and fish habitat that will be associated with the implementation of the regulation. For example, what will happen if the same authorization is granted multiple times in a given area, if there is residual harm each time? Is there any plan to monitor the regulatory impact over time and adjust the requirements?

But even within the narrow scope of its application, the Position Statement is vague in some important ways. For example, are cumulative impacts to be considered on a stretch of river or over a whole watershed? The Position Statement directs DFO staff to consider “management objectives” for fish and fish habitat but gives no indication about what those objectives are. Overall it does not reflect DFO’s own science and experience in relation to cumulative effects.

Significantly, the Position Statement appears to minimize the importance of the cumulative effects of smaller projects, the “death by a thousand cuts” that we would have hoped it would be addressing. The Position Statement seems to maintain the status quo by tolerating “likely” effects from an authorization if they are at a “small spatial and temporal” scale. Projects are only likely to be turned down when the impacts of an additional project, in combination with all projects which have gone before, are of a “high spatial and/or temporal scale” and fish and fish habitat values are “likely to be compromised.”

Nor does the Position Statement provide guidance that will ensure transparency or consistency in how it is being implemented. It does not indicate how, or if, the consideration of cumulative effects will be linked to the new public registry, for example. Similarly, it does not require any type of review of the effectiveness of the Position Statement in supporting the consideration of cumulative effects over time.

Finally, it is surprising that the Position Statement offers little indication that DFO intends to work proactively with Indigenous peoples on cumulative effects. The federal government has committed to implement the United Nations Declaration on the Rights of Indigenous Peoples. Moreover, Indigenous peoples are leading or co-leading watershed and fisheries management initiatives across the country, and there is a growing number of Indigenous-led restoration initiatives and Indigenous Guardian programs aimed at long-term stewardship for fish habitat. The failure of the Position Paper to embrace these realities is disappointing.

DFO will apparently be considering submissions received from West Coast and other organizations before it finalizes the Position Statement on cumulative effects, so there is hope it could be substantially revised and redrafted. However, it is concerning that DFO has already been drafting regulations related to the 2019 amendments without considering cumulative effects, at least in any transparent way, which seems to be contrary to s.34.1(1)(d).

The 2019 amendments and their implementation have been billed as the “modernization” of the Fisheries Act by DFO. If this is truly to be the case, and for DFO to live up to its legal responsibilities regarding fish and fish habitat protection, it must stop turning a blind eye to the cumulative effects of its regulatory and decision-making approaches.