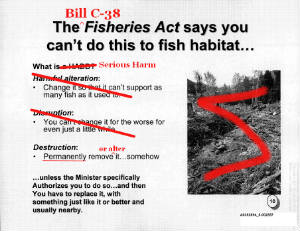 Postmedia reporter, Mike DeSouza, has recently released several slides from Fisheries and Oceans Canada staff explaining how the current Canadian Fisheries Act is intended to protect fish habitat, including a slide clearly setting out the current legal protection for fish habit.  Readers of our Environmental Law Alert will know that Bill C-38, which was passed by the House of Commons on June 18th and is currently before the Senate, seeks to replace the current rule against Harmfully Altering, Disrupting or Destroying (HADD) fish habitat with a general requirement not to cause “serious harm” to fisheries.  If Bill C-38 is passed, the federal Cabinet intends to bring this new rule into force once it has developed regulations for the revised Act.

In addition to destruction or permanent alteration of fish habitat, “serious harm” also refers to anything that actually kills fish (as long as they are members of “commercial, recreational or Aboriginal fisheries or fish that support such a fishery”), but this is something which was already banned under other sections of the current Fisheries Act.

The slide's picture of a clearcut over a stream?  Logging companies may well be allowed to do that to fish habitat without violating the Fisheries Act, if the Bill C-38 changes become law (since the stream will eventually recover and as long as no one can prove that fish actually died as a result).

Click here for more on why “serious harm” is a serious problem for anyone who cares about fish.

The serious harm provision is without a doubt the most significant change to the Fisheries Act under Bill C-38, and yet government statements about the changes rarely mention it – instead claiming that the changes will allow government to focus on fish species or fish waters that deserve protection.  So let us be clear – the “serious harm” provisions will reduce legal protection for all fish and all fish waters – even those that everyone agrees deserve legal protection.  The habitat of many other fish species may not have even this level of protection.

The slide show that Mike DeSouza released was original written by Alasdair Beattie and Peter Delaney of Fisheries and Oceans Canada.  The whole slide show is worth a watch for anyone seeking to understand fish habitat protection under the current Act, and what might be lost by the Bill C-38 amendments.