Climate Science with Silvie: What does the Earth’s rising fever mean for BC? | West Coast Environmental Law

News & Events » Environmental Law Alert Blog » Climate Science with Silvie: What does the Earth’s rising fever mean for BC?
Back to top

Climate Science with Silvie: What does the Earth’s rising fever mean for BC? 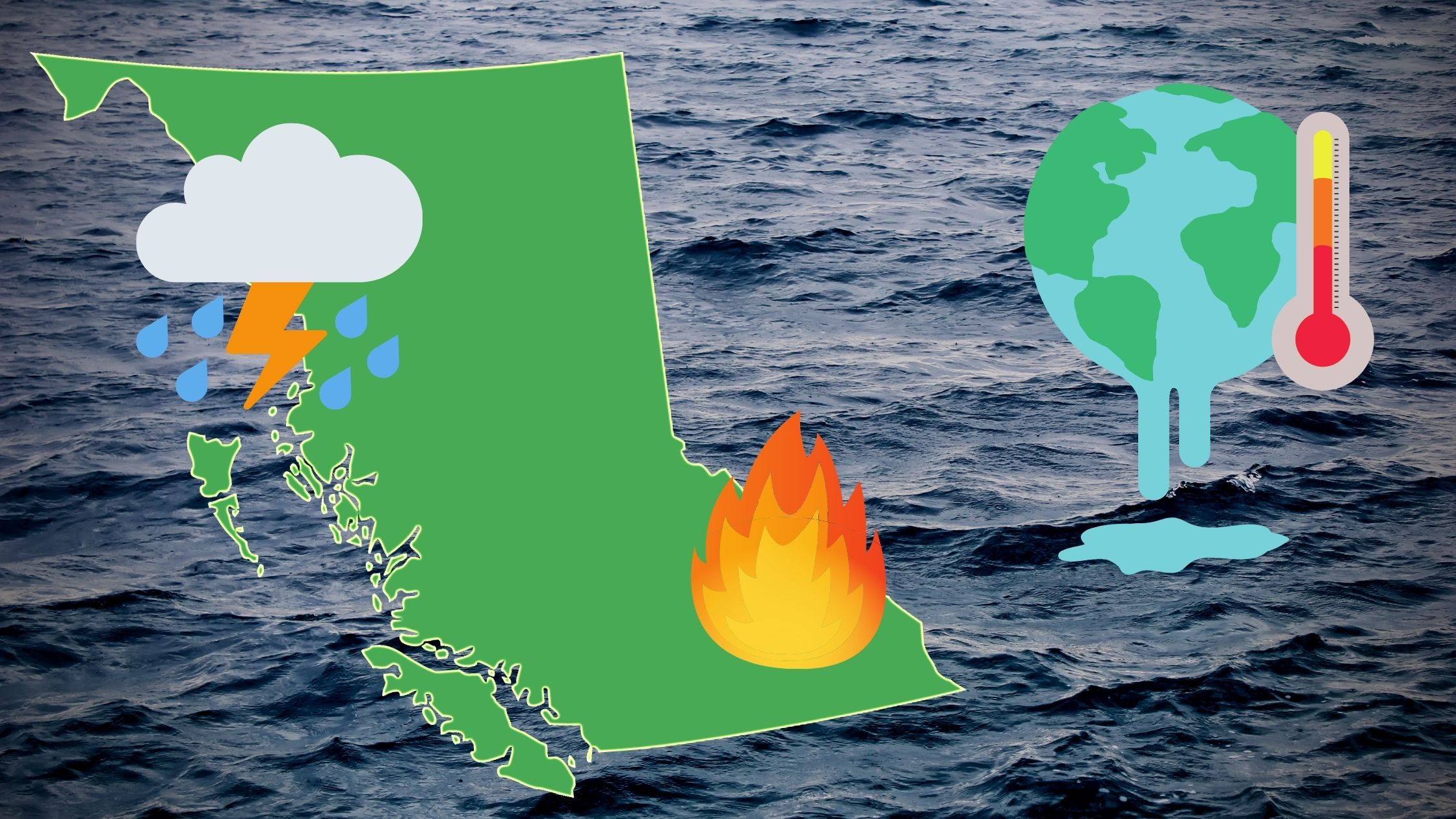 The Earth’s long-term average temperature has risen by a little more than 1°C since 1880, when reliable temperature records began. Alarmingly, most of this warming has occurred since the 1970s, and eight of the hottest ten years in the 140-year temperature record have been in the last decade.

Our planet’s ecosystems are not made to withstand these large and rapid changes, and while we are already witnessing many impacts of such drastic global change, much of how the future will unfold is unknown.

Many of us have heard how the Earth’s fever is affecting the planet – from sea level rise to wildfires to more powerful and frequent storms. We know that choices we make today will determine just how warm the Earth will get and what the impacts will be.

Despite many reminders of species at risk due to planetary heating or ubiquitous photos of ice melting, there can still be a tendency to think about those impacts as affecting somewhere else. This is why one of my tasks as West Coast’s Climate Scientist is to discuss how global heating will affect us here in British Columbia.

If we do not act collectively to reduce greenhouse gas (GHG) emissions and succeed in limiting global average warming to 1.5°C, the results could be devastating. According to climate model projections, a 1.5°C future could look and feel very different compared with a 2 or 3°C future.

To share just a few (of many) examples: if warming is kept as close to 1.5°C as possible, water stress will affect half as many people around the world, flood risks will be much lower in susceptible regions, and impacts to ecosystems would be largely reduced. At 2°C, 25% of insects would potentially lose more than half of their range, whereas at 1.5°C, this figure drops to 9%. These examples illustrate how even 0.5°C of extra warming can have widespread and harmful effects.

How bad will the Earth’s fever be in BC?

There are a couple of important things to remember when it comes to understanding how bad climate change might get in BC:

The global average temperature of the Earth has risen by around 1°C since humans began systematically recording air temperatures. On average, BC and Canada have warmed at almost twice the global average rate, with the greatest increase occurring in the north.

We are already seeing more forest fires, flooding and drought.

One way of visualizing what future climate change may bring to our regions is to look at representative concentration pathways (RCPs). These are scenarios used in climate models and offer a range of conceivable descriptions of how the future may unroll.

The RCPs depict different climate futures, ultimately depending on whether strong mitigation policies are enacted and how this translates into GHG concentrations in the atmosphere. Along with GHG concentrations, RCPs also consider a range of factors such as possible socio-economic changes, land-use change and technological advancements that may occur in the future.

RCPs can be simplified into high and low carbon scenarios, depending on how Earth’s societies develop and if we constrain GHG emissions from now and into the future. In the “low carbon” scenario, GHG emissions rapidly decline beginning around 2050 and global average temperatures increase by around 1.4°C mid-century and to 1.8°C by the end of the century.

Under the “high carbon” scenario however, few mitigation measures are enacted, and we continue untethered release of GHGs. In this scenario, global average temperatures increase by around 2°C mid-century, and to 3.7°C by the end of the century.

Regardless of which path we find ourselves on, global heating is not uniformly distributed across the planet. For example, the average temperature increases will be more dramatic the further north you go. The Arctic (a region close to my heart) has warmed by 0.75°C in the last decade alone, and a 2°C average global increase in temperature could mean an average of 7°C of warming for the world’s high latitudes. 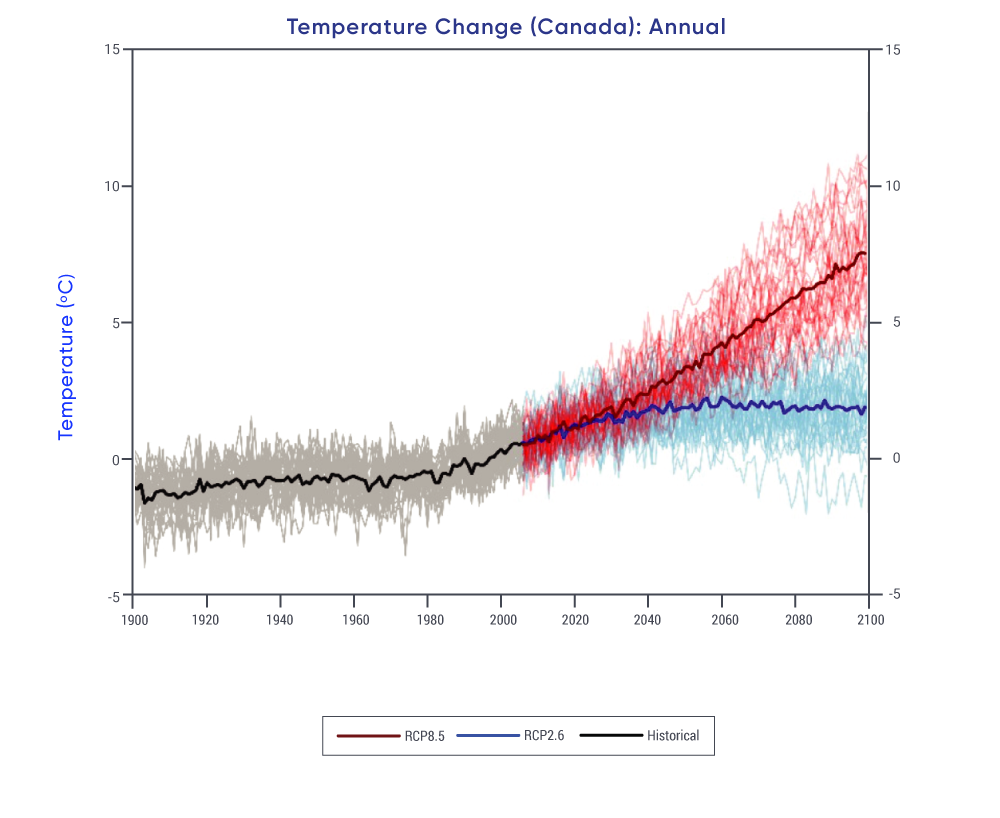 What does this mean for BC?

Many parts of BC have already warmed more than the global average and we are feeling the impacts in our communities. When we dive into specific climate projections, we can explore different possible climate outcomes in BC later this century.

Provincially, BC has had average of 4.2 days per year when the air temperature exceeds 30°C (during the 1976-2005 period). Under a “high carbon” scenario in which we do little to curb fossil fuel emissions, the number of 30°C+ days are expected to increase to nearly 30 days per year in the period of 2051-2080. Under a low carbon trajectory (where global warming is limited to around 1.8°C), the number of very hot days is lower, at 17.2 per year.

To take a closer look at the possible impacts for Vancouver, the city is projected to experience up to 35 days above 30°C with a high carbon future, compared to only 2 extremely hot days under a low carbon future scenario. The number of days above 25°C increases from 43 days to 100 days depending on the emissions pathway.

Extreme high temperatures can negatively impact human health and also increase the risk of drought, which affects agriculture and food production as well as increasing wildfire hazard. Hot weather can also bring about more thunderstorms, which can lead to lightning (more fires) and higher potential for flash flooding.

Under a high carbon future scenario, wildfire seasons will become longer and more severe. The number of “fire spread” days – days where extreme conditions are likely to lead to spreading wildfires – could increase by more than 50% in western Canada over the next century, leading to impacts on health due to smoke as well as possible property loss and even death. 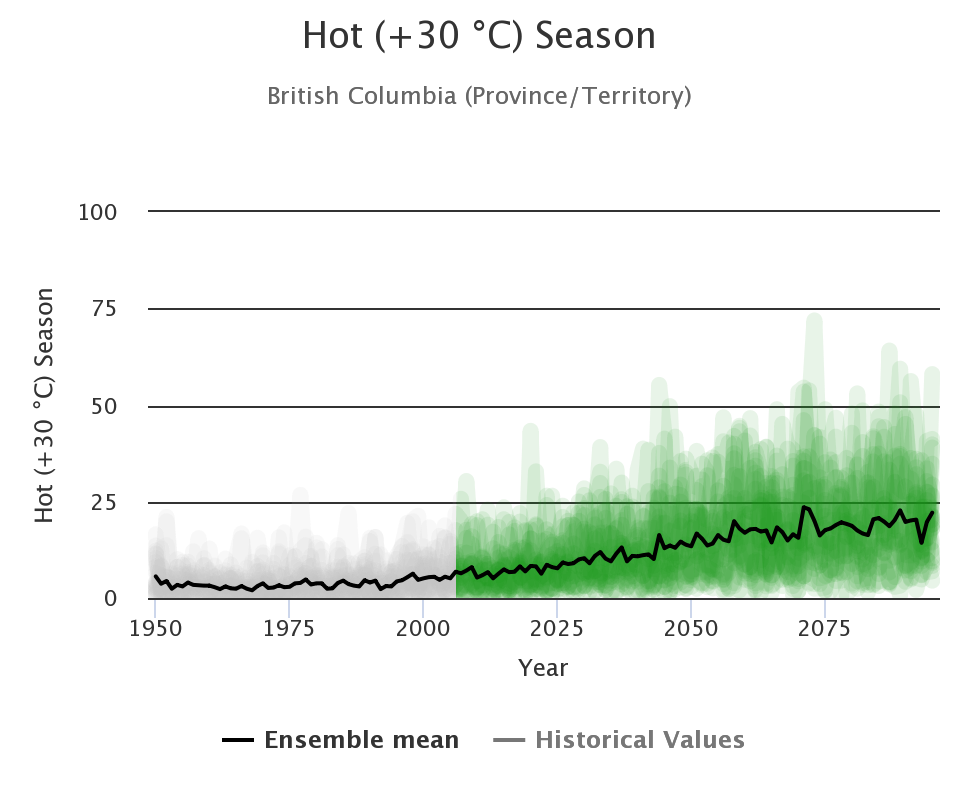 Low carbon scenario (RCP 4.5) – increase in number of hot days over this century
From: Climate Atlas of Canada (climateatlas.ca) 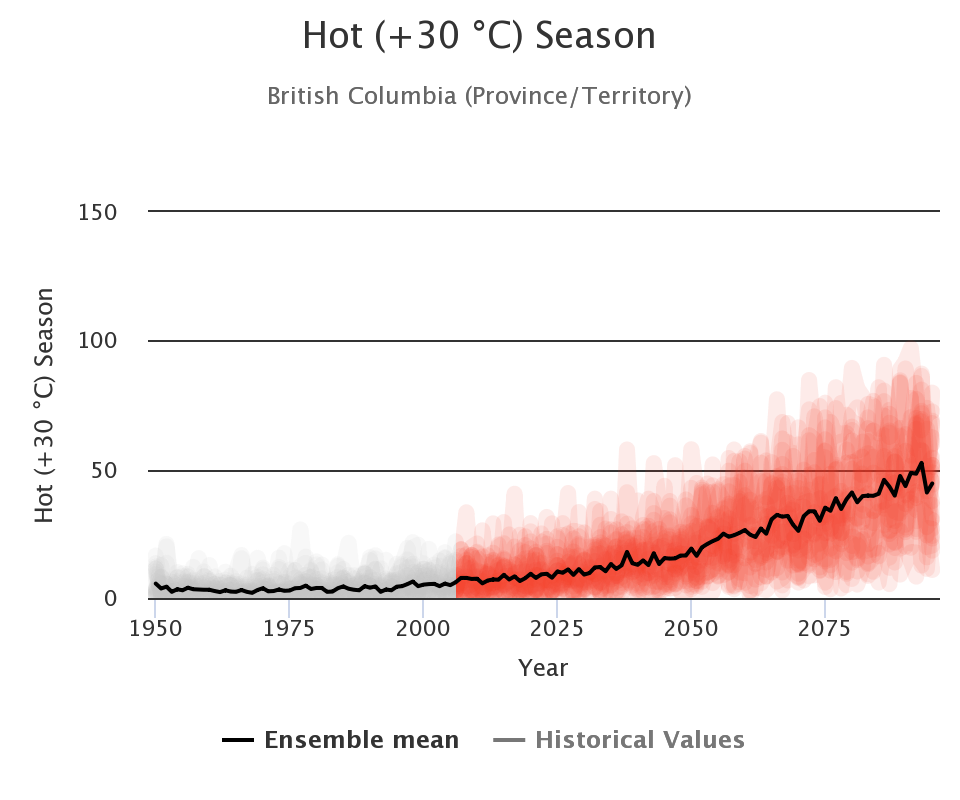 High carbon scenario (RCP 8.5) – increase in number of hot days over this century
From: Climate Atlas of Canada (climateatlas.ca)

Following a high carbon emissions scenario, BC would experience 17 fewer frost days in the period of 2050-2081. Mean winter temperature in BC would be 3.5°C warmer than it is now, rather than 2.5°C in the low carbon future. These increased temperatures will bring changes in snowfall patterns and snowpack, which will impact water supply as many of BC’s municipalities rely on mountain reservoirs for drinking water.

Warmer winters can have various impacts, like allowing pests such as the mountain pine beetle to move out of their normal range and exploit forests that would typically not be subjected to these kinds of insect infestations because cold winter temperatures keep them at bay. Many plant and animal species are shifting their geographic ranges further north as warming occurs. These changes in ecosystems can threaten sensitive native species as they are outcompeted by their opportunistic southern neighbours that take advantage of a larger range in habitat.

And of course warming winters will have major impacts on human communities and economies as well. Outdoor enthusiasts and communities that rely on skiing, tourism and other winter activities have increasingly been calling attention to the threat climate change poses to the places and lifestyles they love.

This projected pattern is pretty steady around BC with winter precipitation increasing and summer precipitation decreasing. Precipitation patterns are important for many reasons, especially water availability, flooding and drought risk. The impacts of climate change are strongest felt through changes in hydrological patterns like rainfall, drought and snow and ice dynamics.

By 2050, the wettest day of the year is projected to be 10% wetter than today’s wettest day, which will lead to higher water levels in rivers and the potential for severe flooding. An example of this is that the one-in-500-year Fraser River flood could be as much as five times more likely to occur with certain climate projections. If this were to happen today, it would become the costliest “natural” disaster in Canadian history.

In writing this blog post, I hoped to illustrate two main concepts. The first is how important it is – at both the local and global level – to limit average global heating to well below 2°C, and how seemingly small discrepancies can have enormous impacts. We need to learn from the experiences of places like the Arctic that are already living the catastrophic consequences of warming above 2°C and work as hard as we can to prevent this from happening on a global scale.

The second idea I hoped to bring to light is that although time is short, we have not yet entirely determined whether we will follow the high or low carbon pathway this century. We do still have the ability to change our activities, make smart climate policies and choose the pathway that is the least damaging.