Climate and the ocean: How to combat ocean acidification | West Coast Environmental Law

News & Events » Environmental Law Alert Blog » Climate and the ocean: How to combat ocean acidification
Back to top

Climate and the ocean: How to combat ocean acidification 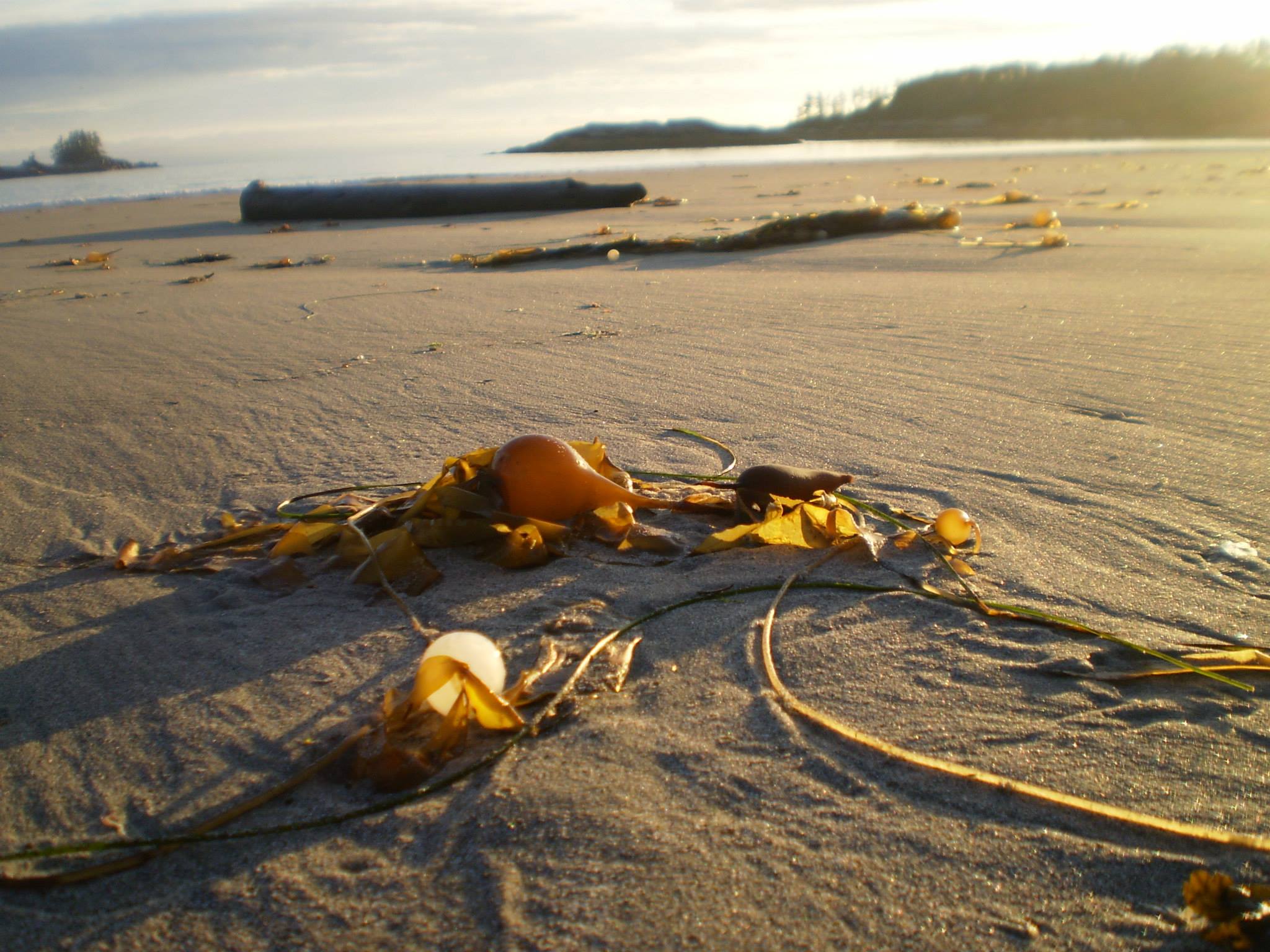 With the COP26 UN climate negotiations underway until the end of this week, the world is watching political leaders to see how they will work together on reducing emissions, phasing out fossil fuels and decarbonizing the economy, and how they will support the Global South in this transition.

Absolutely crucial to climate regulation are the world’s oceans: half of the oxygen available to us has been produced by phytoplankton, a microscopic organism that lives in the ocean. In other words, it’s as if every second breath we take comes from the ocean. In addition, the ocean is a major carbon sink and has sequestered, or taken up, 20-30% of the carbon dioxide (CO2) emitted by humans since the 1980s through diffusion into the water itself, and through photosynthesis by plankton and algae.

We cannot afford to allow our oceans to continue to be degraded – rather, we need to protect them. Ocean conservation is climate action.

Just as the oceans have an impact on climate change, the climate crisis has significant impacts on the oceans. One element of climate change in the marine sphere that is generally poorly understood is ocean acidification: what causes it, its impacts, and – importantly – what we can do about it.

What is ocean acidification?

Ocean acidification occurs when the acidity of the water increases, causing the pH to fall below a normal level. It is caused primarily by the ocean water absorbing and dissolving CO2 from the atmosphere – and as human-caused CO2 emissions increase, so does the ocean’s absorption of CO2.

Ocean acidification is also caused by the disposal of sewage, industrial and agricultural waste, which stimulate algae growth by delivering excess nutrients to the ocean. When these algae die, they release CO2 directly into the water, resulting in greater acidification. 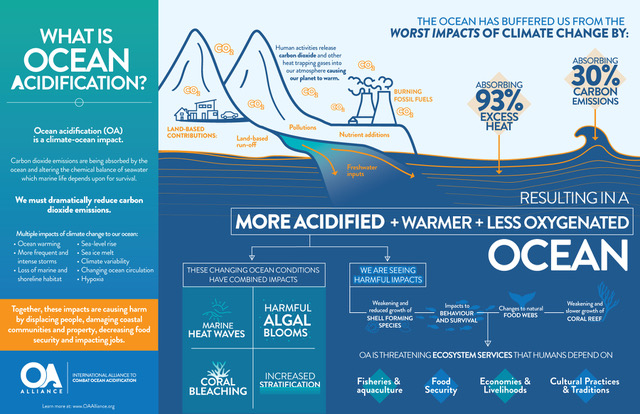 Why is ocean acidification harmful?

Ocean acidification is particularly harmful to shellfish, and any marine organisms with shells – such as corals, crustaceans and molluscs – as they need carbonate ions in order to build their shells and skeletons. That same compound (carbonate) is required in the process of absorbing CO2, so less is available to these organisms. This is why ocean acidification, along with higher temperatures, causes coral death (or “coral bleaching”) and shellfish die-offs. The impacts of ocean acidification are already being felt in the recent West Coast oyster die-offs and coral bleaching around the world.

This in turn threatens the marine food web, as some of these shell-forming organisms are at the base of the food chain. (Other organisms at the lowest end of the food chain are impacted by ocean acidification in a different way – by affecting their ability to uptake iron – demonstrating the complexity of this field of research).

Ocean acidification also impacts fish behaviour, affecting their ability to find suitable habitat or flee predators. Effects on fisheries and shellfish harvesting can have wide-ranging impacts for the communities that rely on these activities for food, financial and cultural purposes.

What is being done?

Canada has committed to addressing ocean acidification through the United Nations’ Sustainable Development Goals (SDGs), and BC is developing an Ocean Acidification Action Plan. However, neither level of government is moving quickly enough.

In 2015 Canada adopted the SDGs. SDG 14, target 3 states that member states will endeavour to “minimize and address the impacts of ocean acidification, including through enhanced scientific cooperation at all levels.” Canada’s current status is listed as “exploring data sources.” Though the SDGs are not legally binding, “countries are expected to take ownership and establish a national framework for achieving the 17 Goals.”

In 2016 BC, along with the governments of California, Oregon and Washington, created the International Alliance to Combat Ocean Acidification (OA Alliance). It was started in response to some of the first observed impacts of ocean acidification on oyster hatchery production on the West Coast. The alliance, comprised of more than 70 governments and organizations, calls for the creation of Ocean Acidification Action Plans. This fall and winter, BC is consulting with researchers and industry to “garner community input on a [B.C. Fisheries and Aquaculture Ocean Acidification and Hypoxia Action Plan].”

All orders of government should be involved in addressing ocean acidification, as each has a jurisdictional role to play. Indigenous nations are stewarding marine areas within their territories, which includes managing coastal areas that store and sequester “blue carbon”. Local governments have an opportunity (and responsibility) to act; for example, the Semiahmoo First Nation, the City of Surrey and the City of Delta launched a pilot project to build a “living dike” to protect a salt marsh from erosion. The project was initiated to prevent coastal flooding, but another benefit is protecting CO2-sequestering services of the marsh.

What can be done?

The two categories of action on ocean acidification are mitigation and adaptation. Below are a few key steps that could be taken here in BC, both to mitigate and adapt to this growing problem.

First and foremost, the only practical way to mitigate ocean acidification is to mitigate climate change generally – that is, reduce CO2 emissions. The commitments made at COP26 last week, including phasing out international fossil fuel funding and capping oil and gas emissions, are a good starting point but much more needs to be done.

Secondarily, carbon sequestering ecosystems – like kelp forests and seagrass – can be cultivated to absorb more CO2. Protecting blue carbon, or carbon stored in vegetated coastal ecosystems, can have particularly strong impacts on coastal ecosystems. We can accomplish this by protecting intact ocean ecosystems through marine protected areas (MPAs), and reducing pressures on the coastline and foreshore by better managing shoreline development.

Indigenous, federal and provincial governments are collaborating to develop an MPA network in the Northern Shelf Bioregion (also known as the Great Bear Sea, spanning from the northern end of Vancouver Island to the Alaskan border). It is the result of years of planning, and an action plan is expected to be released before the end of the year, along with a period of public consultation. West Coast Environmental Law is actively involved with conservation partners in this process, and will ensure that our supporters are aware of how they can make their voices heard.

To minimize the impact of pollution and sewage waste on ocean acidification, West Coast has been pushing to have Canada’s marine protections strengthened to mitigate the impacts of shipping within MPAs. Shipping impacts include stressors like underwater noise, ship strikes, and vessel discharges, which add to the stress of ocean acidification on marine species and habitats. West Coast has also been urging the federal government to better regulate cruise ships in relation to dumping pollution into the ocean, which can worsen ocean acidification. There are many regulations that touch on industrial and agricultural waste (by all levels of government), but more can be done.

In relation to coastal management, in 2020 the BC government committed to developing a coastal marine strategy. BC currently manages coastal and marine areas through a patchwork of laws overseen by different ministries without an overarching vision or centralized body responsible for decisions. A coastal marine strategy and law, co-developed with Indigenous nations, can help ensure better coastal planning – consistent with the UN Declaration on the Rights of Indigenous Peoples – and can protect coastal ecosystems and shorelines from climate impacts like ocean acidification. As we await the announcement on a public consultation process for the BC coastal marine strategy, you can stay up to date by visiting Blueprint for the Coast where we have been creating resources with the Canadian Parks and Wilderness Society (CPAWS-BC) to inform the process.

To aid species and ecosystems that are impacted by ocean acidification, we must help them adapt. Reducing other pressures like pollution, overfishing and habitat destruction will allow these species to better adjust to a changing marine environment. Strong MPAs can help here too, as can more responsible fisheries management. These measures allow ecosystems, and thereby coastal communities, to adapt to ocean acidification (as well as the compounding effects of ocean temperature and oxygen content). MPAs have many benefits relating to mitigating and adapting to the climate and biodiversity crises, as well as benefits to fisheries and tourism.

As with many other climate-related issues, there is no silver bullet solution to ocean acidification; rather, it will take a combination of various actions from different jurisdictions to protect the ocean from acidification – so that it can keep protecting us.