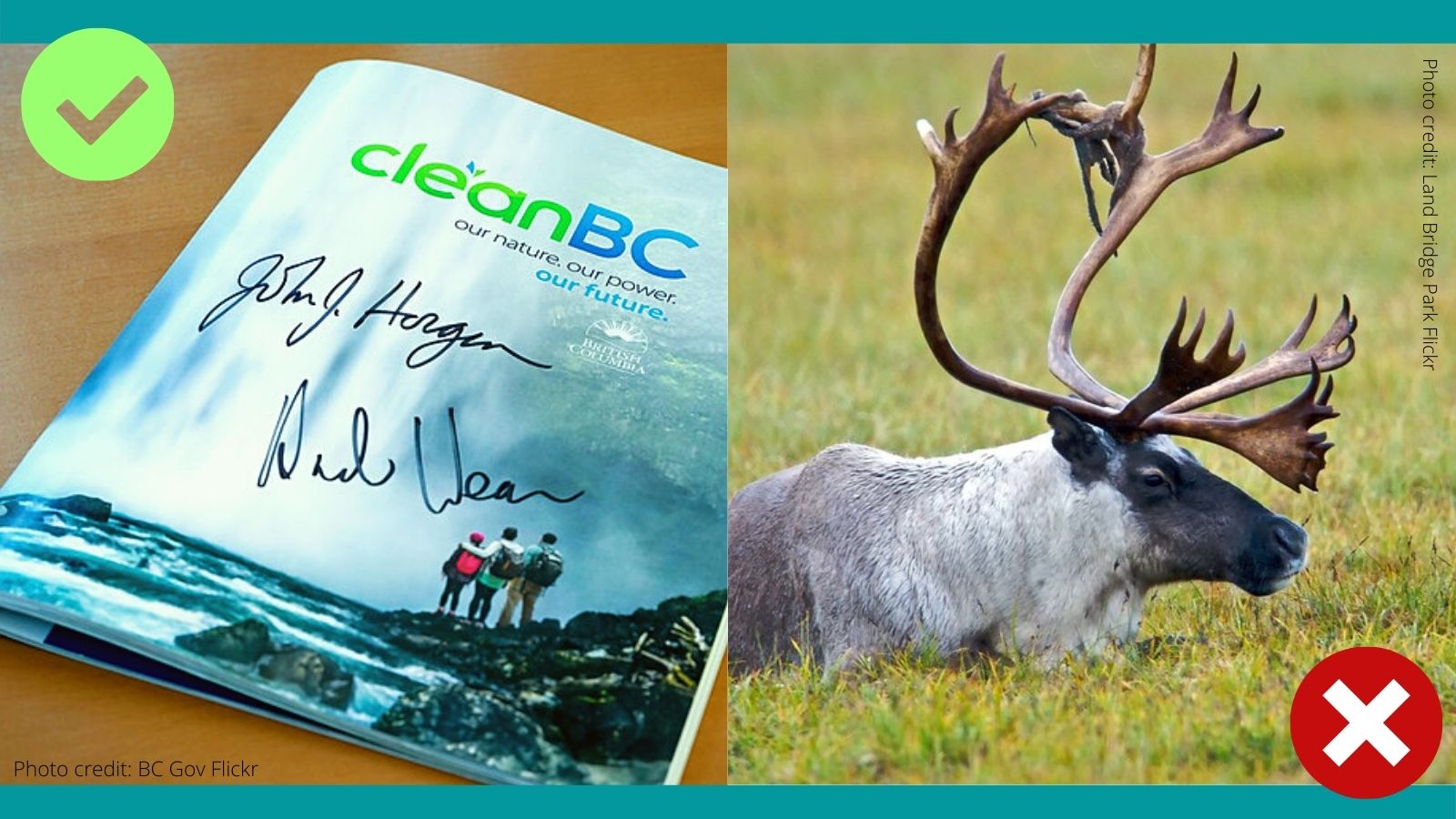 British Columbia is in the middle of an election and the three main parties have recently released their election platforms (NDP, Liberal and Green). They contain a lot of bright shiny objects for those of us who care passionately about the environment.

Reviewing party platforms and evaluating how they align with your values is a key part of the democratic process. However, just as important is tracking whether governments, once elected, actually deliver on their election promises.

The past three years have demonstrated that governments can, and do, make a difference for our planet when they follow through – but also that they do not always deliver.

This post does not attempt, as others have, to evaluate every promise made by the current government or provide a comprehensive list of actions and failings. Rather, I will highlight three election promises that the government delivered on, and three that were missed.

The list below focuses on promises that were actually in the BC NDP’s 2017 Election Platform, Working for You, and do not include promises made outside the platform or by individual candidates. We do not, in this blog post, get into promises that were half done (or done inadequately), but focus on promises that were clearly fulfilled (even if there might be some room for improvement) or clearly not delivered. If you feel that we’ve got it wrong, please tell us so in the comments section below.

In our view the top 3 environmental promises from the 2017 platform which were acted on are:

Climate change is a global crisis, and understandably many voters want to see that their governments are taking action. The 2017 platform promised that the BC NDP, if elected, would:

implement a comprehensive climate action plan that provides a pathway for BC to prosper economically while significantly reducing our carbon pollution and protecting BC families’ budgets.

In our view, the government’s CleanBC Plan, especially along with a strengthened Climate Change Accountability Act, goes a long way to delivering on this commitment.

The work is not complete. Notably, government modelling shows that the current version of CleanBC will get us just 75% of the way to the 2030 target; the government set itself a deadline of this December to tell British Columbians how the other 25% will be met. We are also waiting for sectoral GHG targets, which was also an election promise – but thanks to cooperation between the NDP and Greens those targets are now required by law.

On the whole, despite these outstanding concerns, the BC NDP (and the BC Greens who had significant influence on the plan) can tick off this election promise.

The NDP’s 2017 platform promised that an NDP government would:

update our environmental assessment legislation and processes to ensure that they respect the legal rights of First Nations, and meet the public’s expectation of a strong, transparent process that results in the best outcomes as part of a made in BC assessment process.

West Coast Environmental Law was pleased to see this commitment, as in our view BC’s previous Environmental Assessment Act was weak.

It also includes some improvements in community consultation and the potential for regional assessments. And there is a new requirement to consider a project’s impacts on BC’s legislated climate targets.

However, it’s not all good. Notably, most of the research in an assessment will still be done by the developer’s own experts, with no guarantee of an independent peer review. Also, BC mostly maintained the status quo for which projects get assessed – meaning only the very largest projects require assessment – and even then there’s an opportunity for the government to exempt projects from assessment.

Nonetheless, the new Environmental Assessment Act is a clear improvement and one that fulfills a second promise.

Restored funding and staffing for BC Parks

BC’s wonderful park system has been under-resourced for some time, and the 2017 platform also promised to restore funding to BC Parks.

We will restore funding for BC parks. … We will hire additional park rangers and conservation officers.

The province increased funding for BC Parks by $35 million in 2017 and increased the number of conservation officers to 160 the following year.

While we saw progress in the areas listed above, there are also some promises in the BC NDP’s 2017 platform that they did not deliver on while in office. In particular the government failed to:

An Endangered Species Act for BC

British Columbia is one of only three provinces in Canada without an Endangered Species Act, despite having more species of animals and plants at risk of going extinct than any other province. Environmental campaigns have pressed for such legislation for literally decades, without success, so the BC NDP’s commitment was a big deal:

We will bring in an endangered species law and harmonize other laws to ensure they are all working towards the goal of protecting our beautiful province.

Environment Minister George Heyman was instructed in his mandate letter from Premier Horgan to develop an Endangered Species Act back in 2017, and the Ministry of Environment did start work. Then Green Party leader, Andrew Weaver, introduced a private member’s bill which the government did not support (that’s not unusual for private members’ bills). However, by April 2019 the Premier was telling reporters that there would be no endangered species legislation “for the foreseeable future.”

Exactly why this promise was dropped is not clear, although a backlash against provincial efforts to protect endangered caribou herds may have played a role. What is clear is that there is no mention of endangered species legislation in the new 2020 platform – raising questions of when, if at all, a new NDP government might deliver on its promise.

Fighting climate change is challenging enough without governments paying for the expansion of oil, gas and coal extraction. So it was welcome when the BC NDP promised to eliminate wasteful government spending through (among other promises) a “review [of] oil and gas subsidies.”

Not only did no review occur, but a recent report by Stand.earth found that fossil fuel subsidies have increased, with only Alberta now having a higher level of oil and gas industry subsidies in Canada. Stand.earth’s Tzeporah Berman explained:

I was deeply disappointed to learn that this government, which was elected on a promise of fighting climate change, is in fact giving a billion dollars a year to the very industry that is driving the climate crisis. The data in this report is shocking. The numbers show that the Horgan government has increased subsidies to oil and gas companies by 79 per cent over Christy Clark’s government. You can not claim to be climate champion if you are funding the expansion of fossil fuels in a world on fire.

Clearly the government’s performance (or non-performance) on subsidies is deeply troubling and is at odds with its work on CleanBC. Interestingly the 2020 BC NDP platform offers a similar, although slightly narrower, promise of “a comprehensive review of oil and natural gas royalty credits” from an “environmental lens.”

Perhaps more than most so-called “environmental” issues, banning pesticides that are used for the sake of appearances is also a health issue. The BC NDP quoted a 2012 letter from then CEO of the Canadian Cancer Society, Barbara Kaminsky, in its 2017 party platform:

Enough is known to be prudent and prevent exposure to children, especially when the use of these chemicals is unnecessary. In this respect, prohibiting the use of cosmetic pesticides is both responsible and respectful of the state of the scientific evidence.

The platform then blasted Premier Christy Clark and the BC Liberals for ignoring calls to ban cosmetic pesticides and pledged that:

We will keep cancer-causing chemicals off of our lawns, and out of our parks, gardens and places where children play by banning cosmetic pesticides.

We are not aware of anything the government has done to follow up on this promise since 2017, nor is there any promise to do so in the 2020 platform. There does not seem to be any publicly available explanation for this about-face.

This environmental law alert is not a comprehensive review of the government’s environmental record. Rather, it is a cautionary tale that our involvement in the democratic process does not end with voting. Even as we celebrate environmental progress when promises are fulfilled, it is important to continue to demand accountability.

All political parties need to answer to British Columbians about what they will do to protect the environment – and British Columbians should demand those answers, both during the election and should a party form government. This fall, we encourage you to ask lots of questions and be sure to vote!