Our team » Staff » Samantha Myran
Back to top 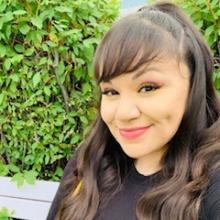 Samantha (she/her/hers) was born in Winnipeg, Manitoba, and is from Giinooshkoodeyang, now known as Long Plain First Nation in southern Manitoba. She came to pursue law as a direct result of the Idle No More movement which opened her eyes and influenced her to become a part of advocating for change. Following that winter, Samantha returned to post-secondary studies to earn an Associate of Arts in Aboriginal Studies from Langara College, a Bachelor of Arts in First Nations and Indigenous Studies from the University of British Columbia, and a Juris Doctor from the University of Manitoba.

During her academic career, Samantha became a member of many student groups including the Alliance of British Columbia Students through her role with the Langara Students Union as the Aboriginal Students Advisor, the Langara Aboriginal Students Association, and the Manitoba Indigenous Law Students Association. In community she has been a part of planning such events as elders’ trips, an Aboriginal Veteran’s Day Pow Wow, and family days in the Central Park of Winnipeg. Samantha takes pride in her experience working in areas of Indigenous governance within her home community, restorative justice initiatives (as a research practicum student at Onashowewin Justice Circle), as well as in customer service.

Outside of work, she spends her time with family, mainly her daughter and younger siblings, doing activities like watching their favourite shows or movies, board games, and reliving favourite past times. Activities she enjoys independently are reading, drawing portraits, and running.