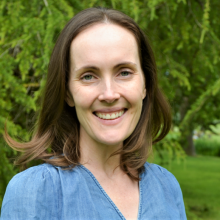 Erin (she/her/hers) is a staff lawyer with West Coast Environmental Law’s Marine team, based on the unceded territories of the W̱SÁNEĆ and Ləkʷəŋən peoples, now also known as Victoria. She sees law as a vehicle for social change, and is deeply committed to law reform that considers the rights of marginalized people and of nature itself.

Erin comes to West Coast from a private practice with Arbutus Law Group LLP, working exclusively in public interest environmental law and on self-governance matters and other general solicitor’s work for Indigenous governments. She has a particular interest in seeking to protect marine spaces, and has worked on legal aid files through the Environmental Dispute Resolution Fund on issues ranging from marine shipping concerns, aquaculture issues and river contamination. She has also worked with the University of Victoria Environmental Law Centre for several years, including as a supervising lawyer for students in its clinical program.

Erin is an organizer with Lawyers for Climate Justice, a group that seeks to advance climate justice within the legal profession in Canada. She is also the BC Legal Advisor to Rivers Without Borders, a project that seeks to protect the watersheds of the BC-Alaska transboundary region.

Outside of work, she enjoys reading, learning how to garden, and exploring Southern Vancouver Island with her family.