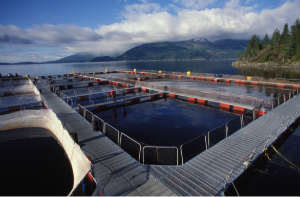 [Update, 30 April 2014 - The Vancouver Sun has revealed that BC fish farm companies received $4.1 million in compensation for fish destroyed in 2012:

The payments of $2.8 million to Cermaq Canada and $1.3 million to Grieg Seafoods are outlined in federal documents about the culls after fish farm exposure to infectious hematopoietic necrosis virus, also known as IHNv.

These revelations further underscore the questions we first asked in this post in August 2012: why should an industry that creates conditions that invite disease out-breaks in public waters, near wild fish, be compensated when their fish get sick?]

How’s this for a business model: You bring together thousands of fish, stick them in an open net in the ocean, despite warnings that the conditions invite infectious disease, and then, when they all get sick, you receive compensation from the Canadian taxpayer.

You may have seen the media reports about the virus outbreaks, the quarantines and the destruction of fish currently occurring at several fish farms around BC. But as yet, there has been little coverage of the fact that under Canadian law these large and often foreign-owned fish farms could receive compensation from the federal government, and many of them are asking for compensation.

As Superheroes for Salmon has written, both Grieg Seafood and Cermaq (which owns Mainstream Canada) have now filed statements about their respective outbreaks with the Norwegian Stock Exchange expressing their hope that the Canadian taxpayer will bail them out. Grieg’s statement reads, in part:

Similarly, Cermaq says: “The financial impact depends on any compensation from the company's insurance or the Canadian Authorities that has required the depopulation.”

One might be inclined to think that this talk of a taxpayer bail-out was just positive spin by the companies for their shareholders, but it turns out that there’s a recent precedent.  This past April the federal government compensated an East-coast fish farm for the fish destroyed as a result of a disease outbreak:

The federal government will compensate Cooke Aquaculture for the hundreds of thousands of salmon ordered destroyed in Shelburne this week.

The Canadian Food and Inspection Agency order the New Brunswick-based salmon farming company to destroy all the remaining fish on a farm of cages just outside Shelburne Harbour after the CFIA confirmed "additional cases" of infectious salmon anaemia. … CFIA spokesman Guy Gravelle says an assessment team has visited the site to begin the process of determining the amount of compensation.

So why would fish farm companies be able to claim compensation for losses through disease?  Even if you buy their line that these diseases were spread from wild fish (the Friends of Clayoquot Sound have data that suggests otherwise), these companies, and not the Canadian taxpayer, made the choice to have Atlantic salmon in open net farms in waters infested by wild salmon with their yucky diseases, and apparently made the choice not to vaccinate them against those diseases.

The legal basis for the claim for compensation is found in the Health of Animals Act (section 51), which reads, in part (and at the risk of oversimplifying):

The Minister may order compensation to be paid from the Consolidated Revenue Fund to the owner of an animal that is … destroyed under this Act … The amount of compensation shall be … the market value, as determined by the Minister, that the animal would have had at the time of its evaluation by the Minister if it had not been required to be destroyed … minus the value of its carcass…

The rules for calculating compensation, including maximum amounts, are found in the regulations.

The good news is that this compensation is not automatic.  The government can apparently consider the above factors and refuse compensation.  However, if the Minister does refuse to award compensation, the fish farm companies can appeal that decision (under s. 56 of the Act) to a government “assessor,” and get a second kick at the can.

Salmon farming has a controversial history in BC. Many would argue that fish farms have done as well as they have because they do not need to pay the costs of the damage that they cause to wild stocks, or even fair rent on the public waters that they use.

But a bailout for these losses would mean that they don’t even have to pay for losses that come with open net salmon farming, and as such represents a direct subsidy to what many, including West Coast Environmental Law, believe to be an unsustainable industry.

These are very large companies, with private insurers.  They can afford to pay for the costs of their own choices.  As other ENGOs have pointed out, these outbreaks represent an additional reason, and a financial incentive, to get open net fish farms out of BC’s waters, and into closed containment facilities.  But why would fish farm companies head that financial incentive if it’s paid for by the taxpayers?

We understand the value in compensating small-scale farmers whose operations are, through no fault of their own, negatively impacted by diseases that must, for the good of the public, be controlled.  However, similar issues are raised when these provisions are used to compensate large-scale losses for factory farms and other farm operations that rely on a density of animals that promotes the spread of disease, absent large-scale antibiotic use.

We believe that the law should ensure that fish farm companies are responsible for the real costs of their operations.  Bailing out these companies would definitely be a step in the wrong direction.