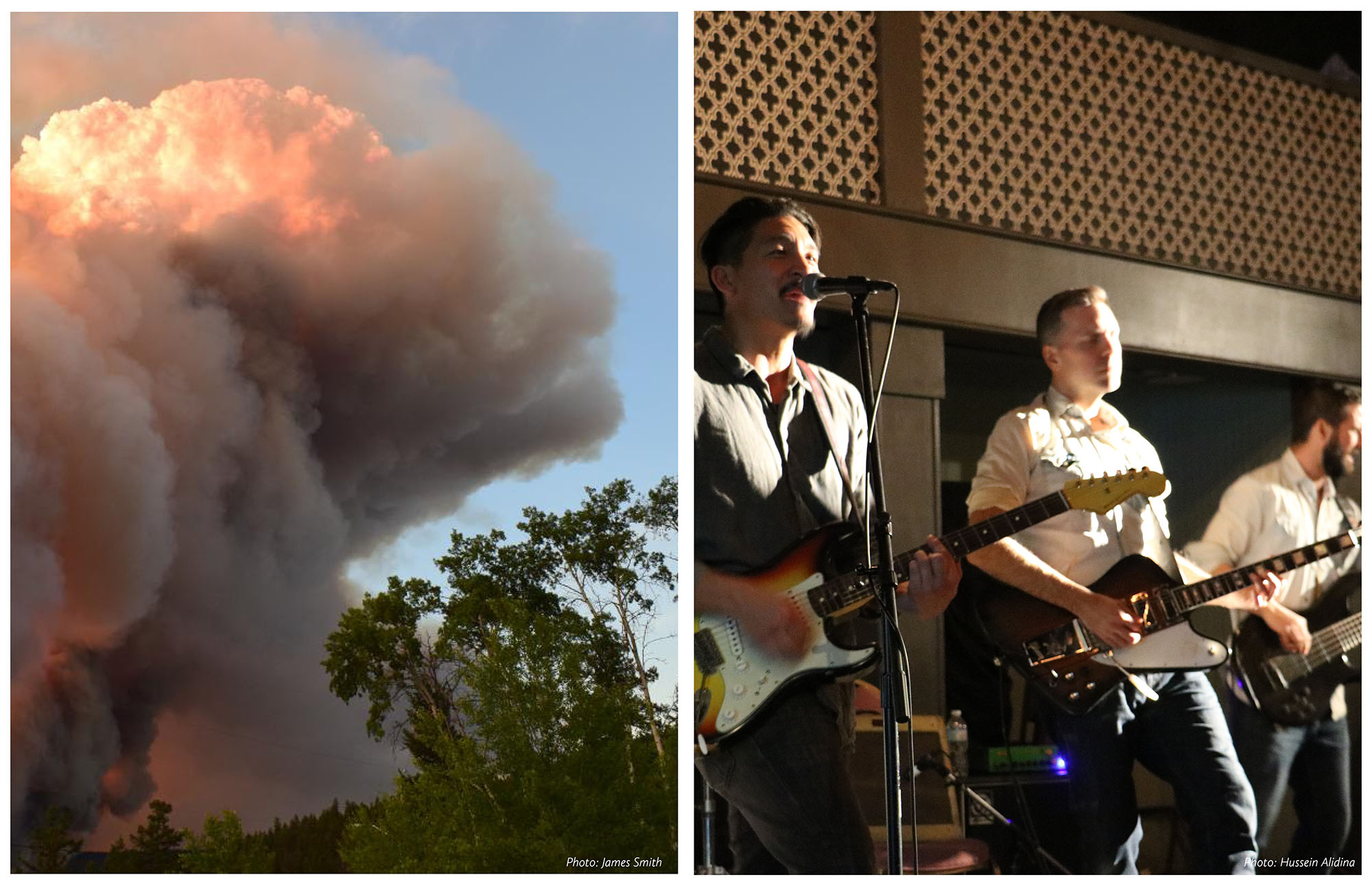 “WE STILL HERE!” belts out JB the First Lady in the Wise Hall. “WE STILL HERE!” echoes the audience. JB, a fierce Nuxalk poet, rapper, singer and activist, was headlining our recent “Wildfires & Wild Foods” fundraiser, a concert and dance intended to raise money to support the Yunesit’in community in Tsilhqot’in Nation territory. 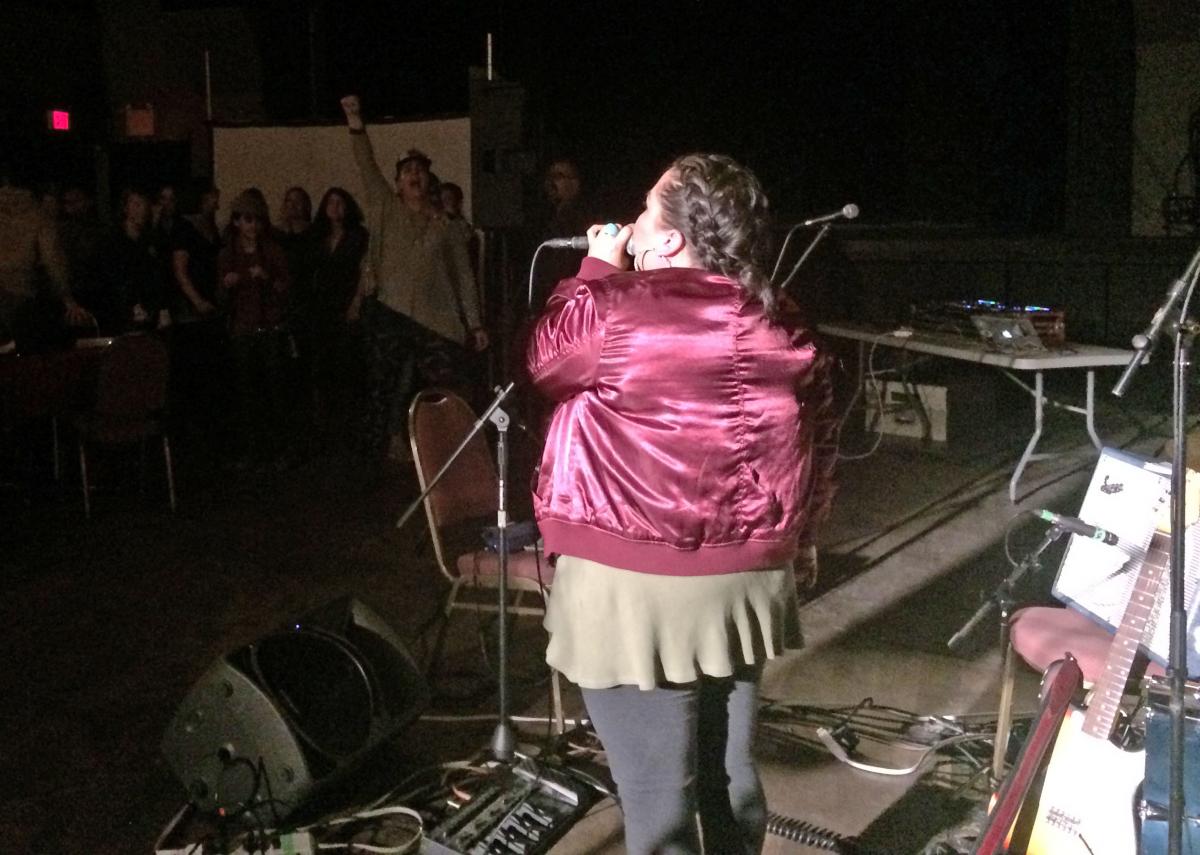 The Yunesit’in are still here, too. Despite the wildfires that roared through their territory this past summer, driving away their horses and cattle, destroying the wild plants and wildlife that the Yunesit’in rely on for sustenance. Despite being forced to defend their lands at a time when they should have been gathering hay and putting away food for the winter. Despite power failures that caused the food that they had put away in freezers to spoil. The BC interior has long seen forest fires, but climate change means that extreme fire seasons like this one will continue to get worse.

Our fundraiser focused on helping members of the community buy food to replace traditional foods that were destroyed, or that they were unable to harvest because of the wildfires. We raised over $3500 thanks to the generosity of those who attended – as well as many who didn’t, but made donations anyway.

West Coast Environmental Law’s Climate Law in our Hands program has focused on a discussion about how BC communities will pay for the costs of climate change, and the role of the fossil fuel economy in exacerbating those costs. For us, the impacts of the forest fires on the Yunesit’in raise some fundamental questions about climate justice – about how we can make sure that the communities that have participated least in the fossil fuel economy are not without friends when the costs of our economic choices become clear.

“When we stand with the communities most impacted by climate change, that’s when we stand for climate justice,” said Anjali Appadurai, highlighting why West Coast had chosen to hold this fundraiser. 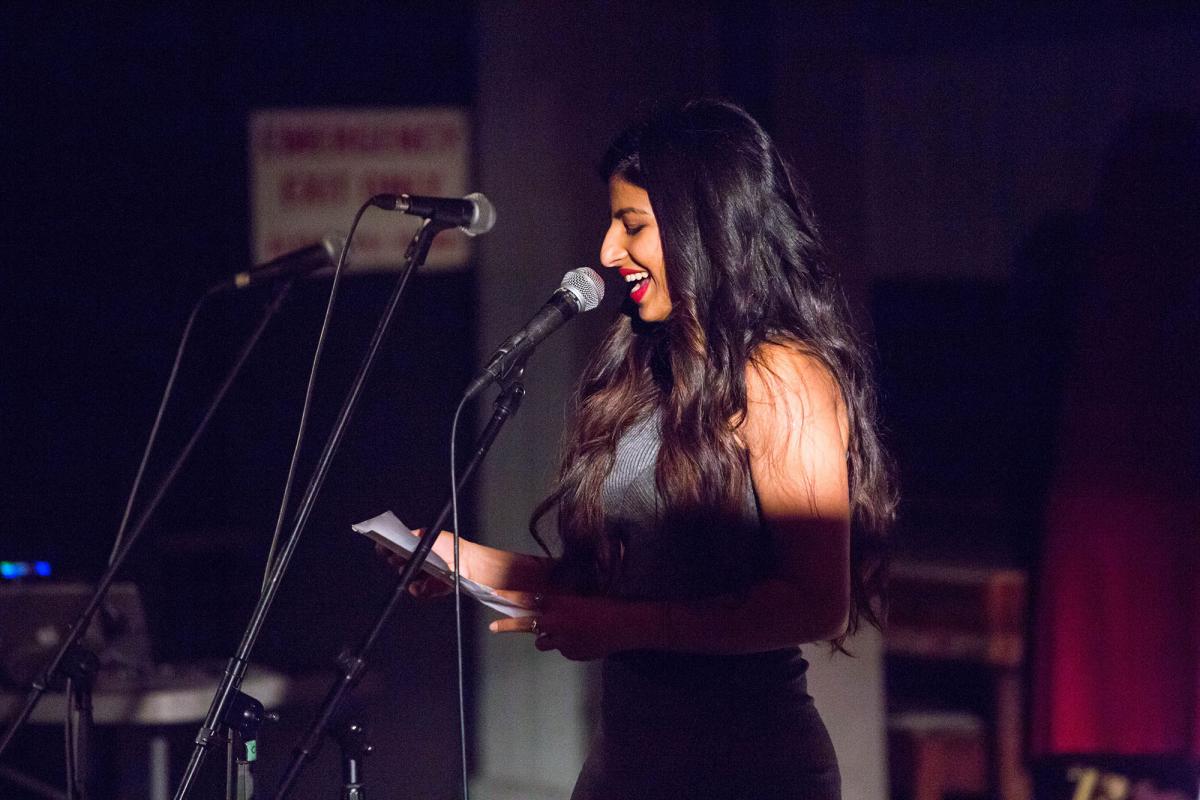 Recognizing that at that very moment Indigenous groups were present at the international climate negotiations in Bonn, Anjali quoted from the 2015 declaration of the International Indigenous People’s Forum on Climate Change:

… Indigenous Peoples often rely directly on natural resources and ecosystems, and thus are especially vulnerable to, and disproportionately hit by, climatic changes. They are being forcibly removed from their lands by deforestation, sea-level rise, major infrastructure projects and conflicts arising from resource scarcity. All the while, they play a critical role in climate change mitigation and adaptation through their historic and effective role as stewards of much of the world’s remaining forests.

She highlighted that settler communities in BC have begun asking about the role of the fossil fuel economy in causing local climate impacts – with letters being sent to 20 fossil fuel companies by local governments in Victoria, Saanich, Colwood and Highlands.

Staff Lawyer Lindsay Borrows, representing our RELAW program, spoke about West Coast’s work in partnering with Indigenous communities through BC to articulate, revitalize and apply their laws to protect land, air and water. In particular, she recounted the two week-long horseback rides that she and Hannah Askew had taken into Tsilhqot’in territory, as a first step of building a strong working relationship with Yunesit’in and other Tsilhqot’in communities. We have an ongoing relationship that we could not ignore when the wildfires burned through Yunesit’in territory. 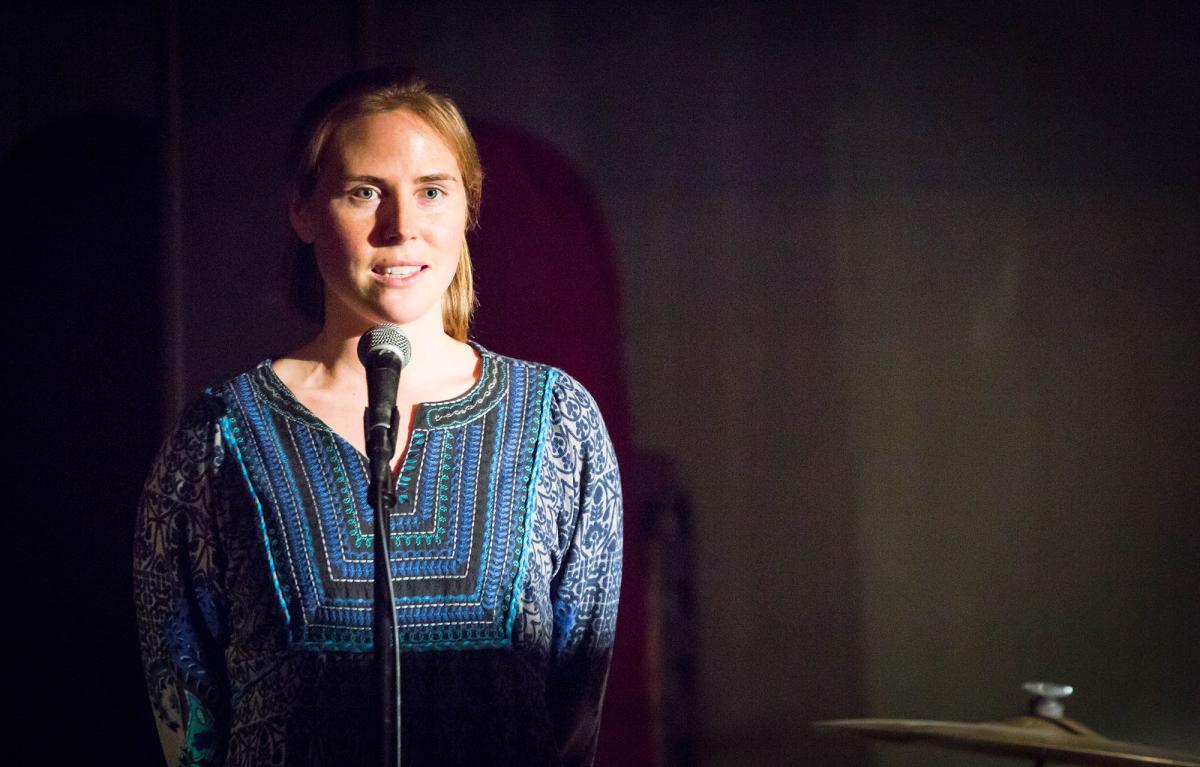 Together, Anjali and Lindsay spoke to the critical need to uphold Indigenous law and governance as a response to climate change.

It was important for us – at an event in urban Vancouver – to see images of the region impacted by the wildfires, and to hear about the food that we were fundraising for.

Filmmaker David Lavallee introduced a short film, Wildfire Warriors, that told the story of the nearby Tl’etinqox people, who refused an order to evacuate their community and stayed to fight the fires.

James Smith, a member of Yunesit’in, showed us a stunning slideshow of photos that he and his mother had taken of the territory before, during and after the wildfires. 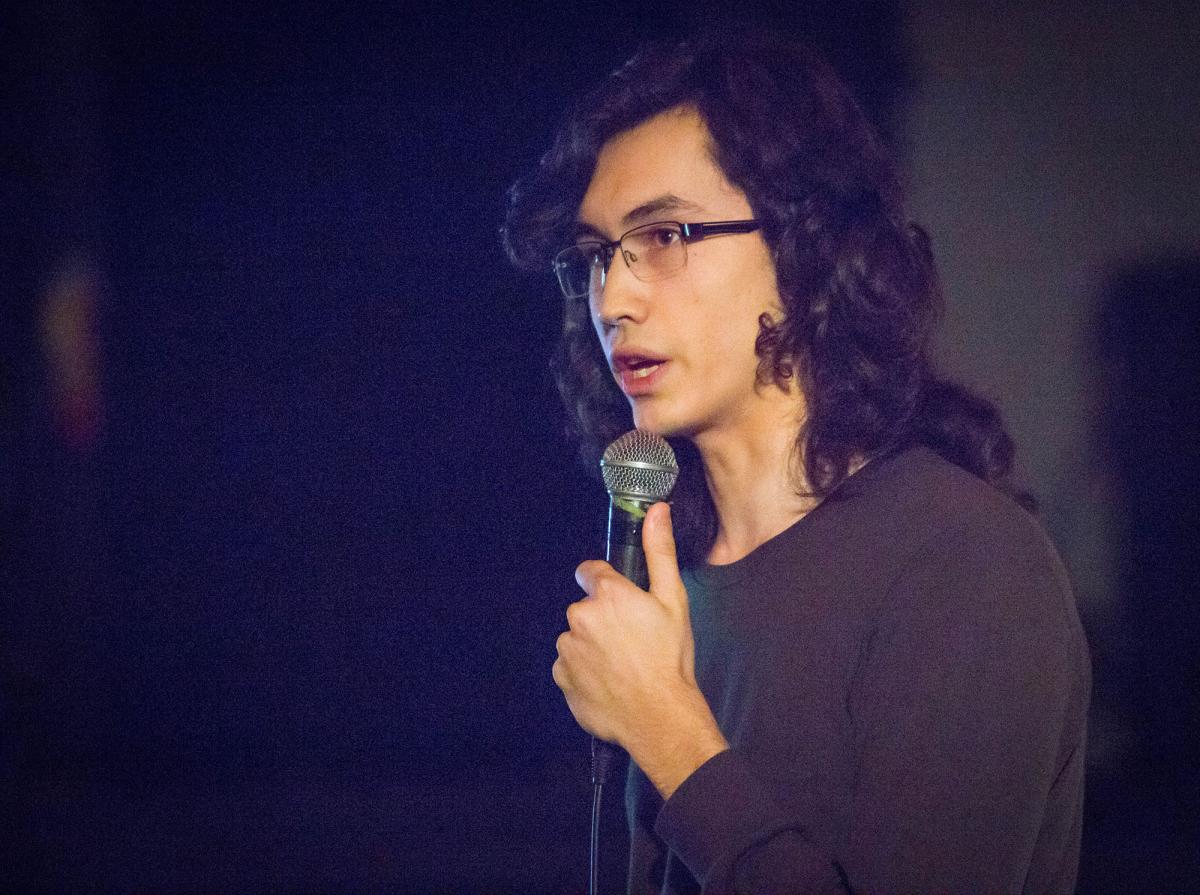 James spoke eloquently and with a lot of humour about the impacts of the wildfires on his community. He told us how his people herd cattle, harvest soap berries and other traditional foods and heat their homes with firewood. He told us about how the fires drove away the cattle and destroyed the hay that would feed them in the winter. He told how days without power meant that meat in their deep freezers went bad, how the local corner store burned down, and how they now need to drive (those of them with cars and money for gas) over 100 km to Williams Lake to buy food. We also celebrated as James told us that, as a result of the hard work of dedicated firefighters from the community, they had not lost a single house. 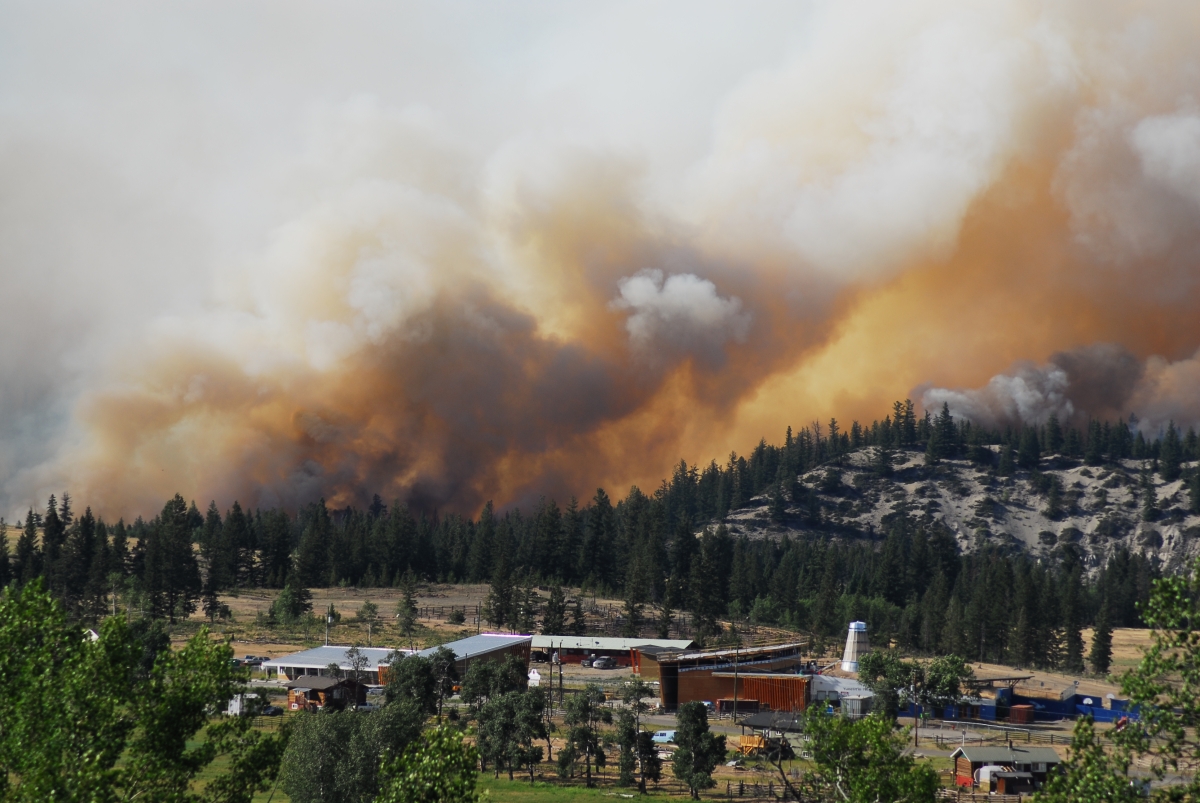 James’ presentation also raised questions about whether the Province’s firefighting efforts had been able to take into account the community’s knowledge of the region and of forest fires, or to appreciate their priorities in fighting the fires.

And then we danced

With a last pitch for donations, we turned the evening over to Buckman Coe and then to DJ Young Dene for some great music and dancing. 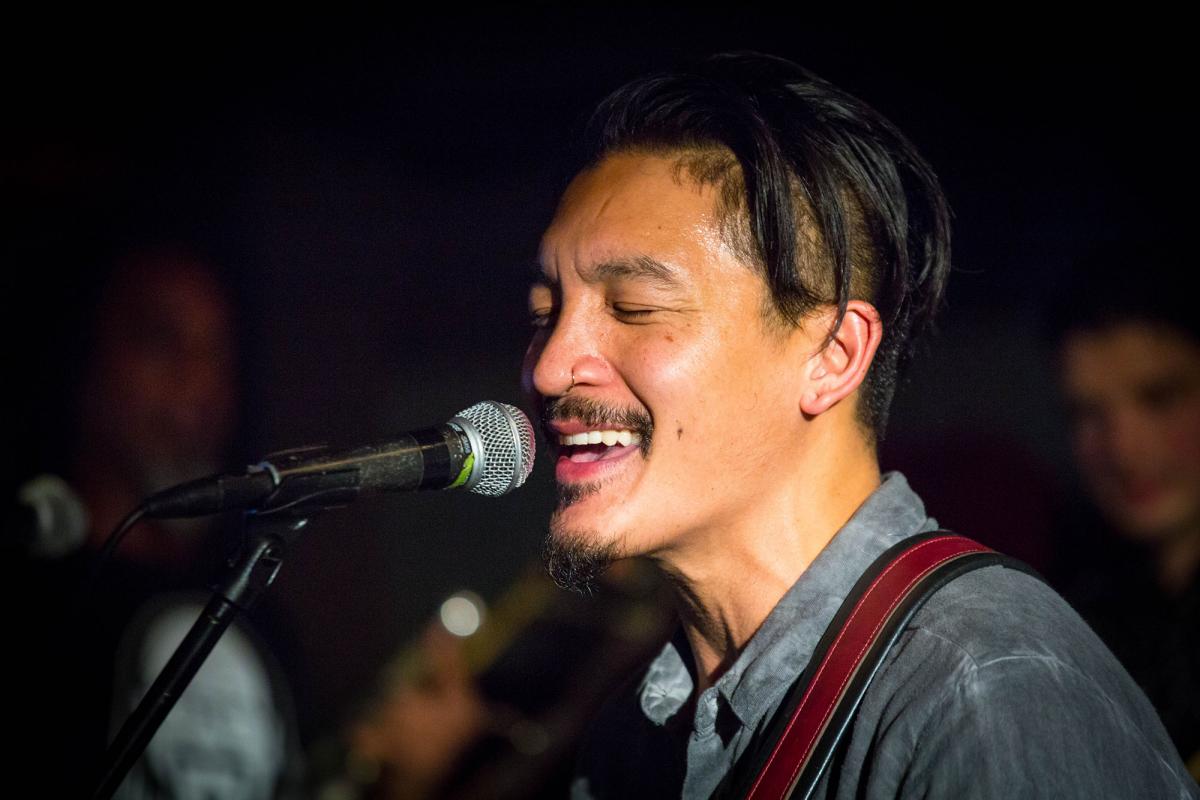 The more than $3500 raised will help Yunesit’in families that have lost their winter food to make it through the winter.

Climate change will not affect us all equally, and we will all have different needs in addressing it. Indigenous law, governance and wisdom presents us with a response to climate change that is grounded in Indigenous peoples’ profound relationship with the Earth, and thousands of years of sustainable stewardship of the land.

Following Indigenous leadership in a warming world, we will all need to work together to demand climate justice and to confront the violence of the fossil fuel economy.

Note: Many thanks to the Wise Hall, to the artists and presenters, to our volunteers, to West Coast Staff and others for making this event possible.