Why were climate funds for local governments abruptly cut, and where do we go from here? | West Coast Environmental Law

News & Events » Environmental Law Alert Blog » Why were climate funds for local governments abruptly cut, and where do we go from here?
Back to top

Why were climate funds for local governments abruptly cut, and where do we go from here? 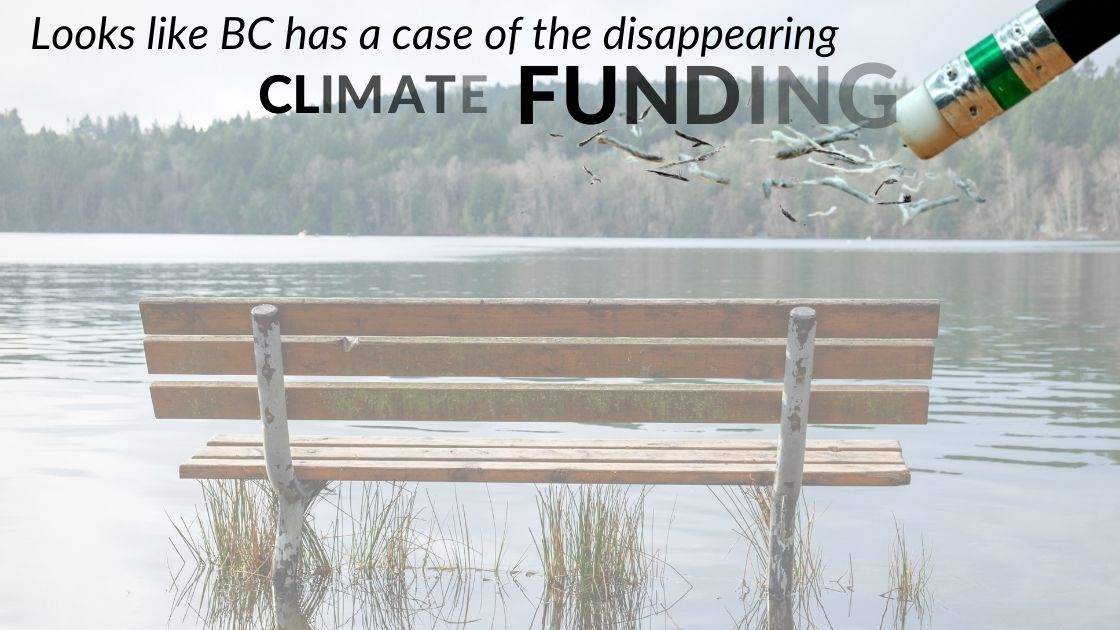 West Coast’s climate team was talking recently with an Environmental Coordinator with a BC local government when she mentioned – almost casually, although she was clearly upset – that most of the funding that her community has for climate change adaptation and planning had disappeared for next year.

That was how we learned that the province had cancelled the Climate Action Revenue Incentive Program (CARIP) without warning.

Communities across BC are facing escalating costs for climate change adaptation and mitigation as the frequency of floods, droughts and forest fires increases. But despite the rising risks of climate-related events, local governments have limited options to raise funds for preparing and mitigating climate impacts. Raising property taxes to address risks that may still feel abstract to local residents can be politically challenging.

The CARIP, which has been around since 2010, is a “conditional grant program” that reimburses communities for what has been spent on carbon taxes to incentivize local climate action. Through this program, round $8.4 million has been distributed annually to communities. Notably, there were few conditions attached to the funding and communities could use it as they deemed necessary, as long as it was dedicated to projects related to climate action.

The CARIP provided one source of funding specifically for climate change that local governments could count on.

Data from 2018 (the most recent year that CARIP data is available) shows that across the province, 187 municipal governments participated and just over 2700 environmental projects were funded through the program. The types of projects range from enhancing the energy efficiency of buildings to active transport plans to habitat restoration and water conservation.

a) the diversity of projects funded across the province, and
b) how local governments really have benefitted from this program to fund innovative, locally-adapted projects.

For example, the city of Terrace used their CARIP grant to, among many other initiatives, enhance greenspaces (upgrades to the Howe Creek trails and a Grow Local program with gardening workshops and community education), to update the Downtown Action plan and Urban Design Guidelines along with upgrading the streetlights to LEDs, and to investigate the possibility of incentives for solar generation for home owners. There are pages and pages of examples like these from innovative communities across the province in the CARIP reports.

Aside from providing specific funding for climate-related environmental projects, there are a few important elements of CARIP that will be difficult to replace in the absence of a similar program.

In addition, accessing CARIP funding required communities to keep track of their greenhouse gas emissions, including efforts to reduce them. This reporting is currently the province’s only source of municipal-level data on greenhouse gas (GHG) emissions and reductions. The importance of continuous data of this sort can not be overstated – as New Westminster Councillor Patrick Johnstone noted, “you can’t manage what you don’t count.” A central data repository is essential for tracking historic emissions, for modelling future needs and quantifying reductions.

In addition to GHG reporting, yearly surveys of CARIP participants are also a useful way of tracking progress on any given community’s climate goals. Data such as how many communities have water conservation policies in place, or how many communities have urban forest policies or community energy plans are all collected and compiled into publicly available summary reports and spreadsheets. This information is useful to other communities planning similar activities and can help them define next steps.

Where do we go now?

Achieving the province’s climate goals is going to require local governments to get on board. CARIP may not have been perfect, but those are problems to be fixed, not a reason to unilaterally axe the program. For example, by focusing on returning each local government’s carbon tax, it arguably undermined some of the incentives for local governments to reduce emissions. In our view, the Province made a major mistake in cutting CARIP.

The government has pledged to replace CARIP with a new program that promises to increase funding ($11 million compared to less than $8.5 million under CARIP). But the devil will be in the details. Top-down or micro-managed funding will not see the benefits that CARIP offered.

Will CARIP 2.0 ensure that local governments have access to climate funds? Will it provide incentives for measuring their progress on GHG reductions and efforts to prepare for climate change? Will it maintain a flexible framework for participants to say how they will do so?

Josie Osborne, the Minister of Municipal Affairs was asked about the abrupt end of CARIP in the Legislature recently, and promised to use the coming year to work speak with local governments “about a transition and about a renewed and different approach that government wants to take with local governments as it comes to supporting their climate action goals.”

Minister Osborne was the Mayor of Tofino and a leader on municipal climate action for many years. She has the skills to build a new and improved CARIP. But despite her promise, we remain concerned that when the government chose to cancel this program rather than to improve it, it has left local governments uncertain as to how much money they will have to work on climate change issues next year.

The Province of BC is currently drafting a Climate Preparedness and Adaptation Strategy which will begin in 2022. We await details about a new funding program for municipal governments and hope that it will encourage local climate leadership for years to come.