Why we should all Black Out and Speak Out 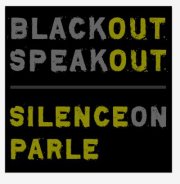 Have you heard about the Black Out Speak Out campaign?  West Coast Environmental Law is working together with other organizations across the country to let Canadians know that changes proposed for the country's environmental laws will silence laws and voices that speak out for our environment – for clean air, clean water, wild creatures and fish.

The Black Out Speak Out campaign wants to mobilize concerned citizens, businesses and organizations across the country to speak out for Canadian democracy and our environment on June 4th.  Our websites will be going black for a day as a symbolic start of a major online campaign to empower Canadians to speak out for democracy and nature. Working together, we’ll be speaking out for as long as it takes. Join us in working for stronger environmental laws, not gutted ones, and help us spread the word.

Why should Canadians speak out?  The Black Out Speak Out website provides 5 top reasons, adapted from the analysis that West Coast Environmental Law and Ecojustice have been doing on the changes to our laws found in the Budget Implementation Act (Bill C-38).  This Environmental Law Alert will expand briefly on those 5 reasons (highlighted in black below), and provide more resources if you'd like to know more about each.

1.  The Canadian Environmental Assessment Act (CEAA) is being replaced with a totally new law.  Under it, Ottawa will play a much smaller role in protecting people from harmful projects, while retaining the role to basically rubber-stamp big projects that powerful oil interests want.  And the new weaker rules are being applied to review processes that are already underway – so projects like the Enbridge Northern Gateway tankers and pipeline project could get an easier ride.

We've written a lot about the new CEAA – which abandons Canada's international commitment to assess all federal government decisions that are likely to negatively impact the environment.  Far from avoiding duplication, the new CEAA will mean that many environmentally dangerous projects are not subject to any environmental assessment.  For example, it appears that in British Columbia, hydro-electric plants up to 50 MegaWatts in size will not be subject to either a federal or provincial assessment of environmental risks.

The new rules give special treatment to the oil and gas industry, and especially pipeline projects.

For further information about the new CEAA, see our environmental law alerts, or Ecojustice's CEAA Backgrounder.

2.    The government is adding $8 million in new funding for the Canada Revenue Agency to audit charities – including environmental groups – because they use their legal right to advocate for things like laws to fight global warming.  This will have a chilling effect on democratic debate, with the real winner being powerful oil interests.  Under the new laws, citizen's groups will likely be shut out of environmental reviews of big projects like oil pipelines.  Key government agencies with expertise will also have less input.  Well funded backroom lobbyists will have greater influence.

The new laws may well shut not just “citizen's groups”, but also landowners living near oil pipelines, hunters and fishers who use the area, and others.  The role of government agencies is reduced through a reduced role in environmental assessment, cuts to scientific staff, and tight time-lines which may be too short to allow for complete scientific research in some cases.

$8 million over two years to ensure that charities comply with the law would be less objectionable (but still an odd priority in a budget that cuts more pressing government programs), were it not for the inflammatory rhetoric directed by government Ministers and by groups affiliated with the oil industry against opponents and critics of the tar sands and associated infrastructure.  The federal Budget plan refers implicitly to this rhetoric, when it explains that the reason for the $8 million expenditure, and for the expanded powers to suspend the tax status of charities for as little as making a mistake in filing a return, is because “concerns have been raised that some charities may not be respecting the rules regarding political activities.”

Really? If you're aware of anyone who has been alleging that “some charities” may be exceeding their allowed political activities, other than people connected to the oil industry or the current government, please post about it in the comments section below. An analysis of tax returns of Canada's charities suggest that only a tiny percentage do any political work.

Ensuring that charities follow the law might be a good idea if we could be sure that all charities would be targeted equally, and if there was evidence that charities were breaking the law, but unfortunately right now there is no evidence that environmental charities are doing anything other than taking a position that the federal government does not like.

In short, the $8 million for investigations of charities comes in the midst of what the Globe and Mail has described as a “smear campaign” against environmental charities - “The only nefarious thing in sight at the moment is a government bent on quashing a legitimate debate.”

3.    The National Energy Board will no longer be able to say “no” to oil pipeline projects that are not in the public interest.  Politicians in Cabinet will be able to overrule the expert energy regulator if powerful oil interests don't like its decision.  Permits that allow the destruction of habitat for fish and threatened or endangered species will be issued behind closed doors without public scrutiny, if they are required at all.

The National Energy Board (NEB) is an expert body, set up to regulate national energy projects in a responsible way.  We have been critical of laws that ask the NEB to evaluate environmental impacts when its focus and expertise is primarily on the operations of the oil and gas industry, and only secondarily on the environment.  Nonetheless, the NEB has considerable expertise in its field, and keeping the NEB arms-length from government has kept the regulation of the oil and gas industry from becoming overly politicized.  The oil and gas industry has considerable political clout, and giving Cabinet the ability to override NEB decisions will encourage corporate interests to spend even more money lobbying politicians, rather than demonstrating that their projects are in the best interests of Canadians.

4.    Many lakes, rivers and streams that provide habitat to fish will be at greater risk of destruction because of changes to the Fisheries Act contained within the budget implementation bill. Healthy fish habitat is important for fish and for the people and businesses that depend on them.

Amendments to the Fisheries Act claim to make it legal to destroy fish habitat – as long as the damage is not permanent and the government cannot demonstrate that the harm directly killed fish.  As we have explained:

5.    The 2012 budget eliminates the funding for the last remaining government advisory body – the National Roundtable on the Environment and Economy (NRTEE) – focused on providing analysis and advice on how to meet our international commitments to reducing greenhouse gas pollution.

In November 2011, the National Roundtable on the Environment and the Economy released its report, Paying the Price, that demonstrated that Climate Change, even if aggressively fought, is expected to cost Canada $5 billion each year by 2020 – just 8 years from now – rising to between $21 to $43 Billion by 2050.  And that's if the world succeeds in bringing rising greenhouse gas emissions under control.  Reminders like this are not comfortable for a government that has failed to provide a meaningful action plan to meet even its weak Greenhouse Gas reduction targets.

But cutting the NRTEE to avoid politically inconvenient reports may be very short-sighted.  In Paying the Price, the NRTEE mapped out climate change adaptation measures which, if adopted now, could save Canada literally Billions of dollars.

Cutting the NRTEE has saved Canada approximately $5 million per year (just slightly more than the $8 million over two years that will allow the Canada Revenue Agency to crack down on charities).  Following the NRTEE's advice could save Canada billions of dollars per year.  You do the math.

We are proud to join with organizations from across the country in Black Out Speak Out.  We hope that you will join us as well.