Who should pay for climate costs – the international edition 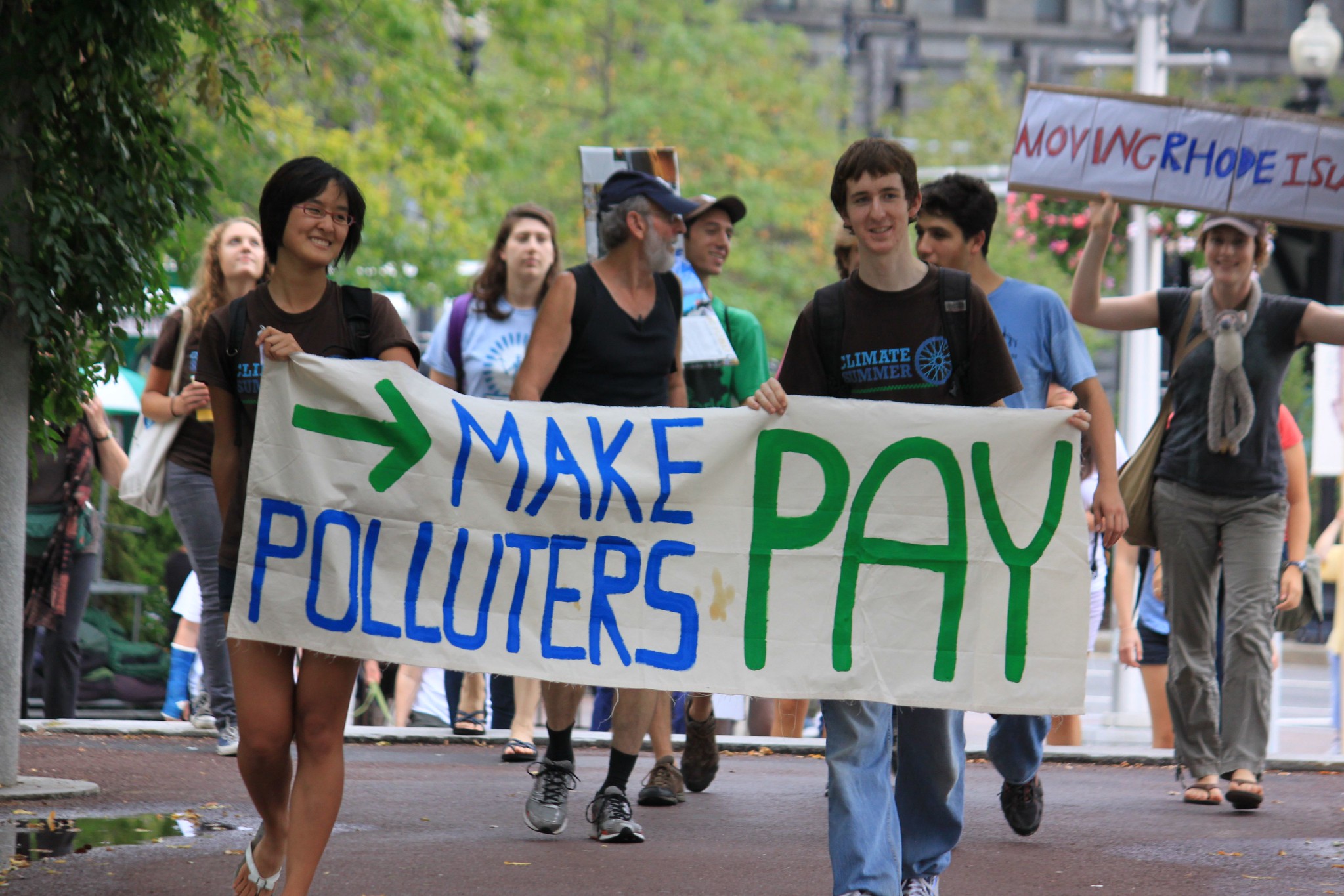 The public thinks the fossil fuel industry should be paying for climate costs.

That’s the conclusion of a number of polls that have been released over the past couple of years in countries around the world.

At least four polls have been released in recent years that show that the public in Canada, the USA, the UK and Australia support – by sizeable margins – the idea that fossil fuel companies should pay a share of the costs of climate change.

These polls were conducted by:

In addition, there was a February 2019 poll recently released by the Center for Climate Integrity (USA) which shows similar results (Press release and Poll Report). However, we have been unable to obtain copies of the poll questions and other information on this poll, so their results are not included in the following discussion, except where noted.

We are grateful to Client Earth, the Yale Program on Climate Change Communications and EcoAnalytics for making additional information available to inform the discussions that follow. However, it is important to recognize that the questions asked in these four polls were not identical, and there are differences in methodology, making direct comparisons difficult.

Nonetheless, all of these polls confirm majority public support for fossil fuel companies to pay their share of climate costs – and in some cases it’s a large majority.

Should fossil fuel companies pay for a share of climate costs? [1]

The UK, Canada and the two US polls have all asked variations of questions about whether fossil fuel companies should pay a share (or percentage) of the costs associated with climate change – such as costs to fight wildfires, raise seawalls and protect communities from increasing climate impacts. In all of these polls, a majority of respondents agreed. Public support ranges from 57% in the United States to 79% in Canada. 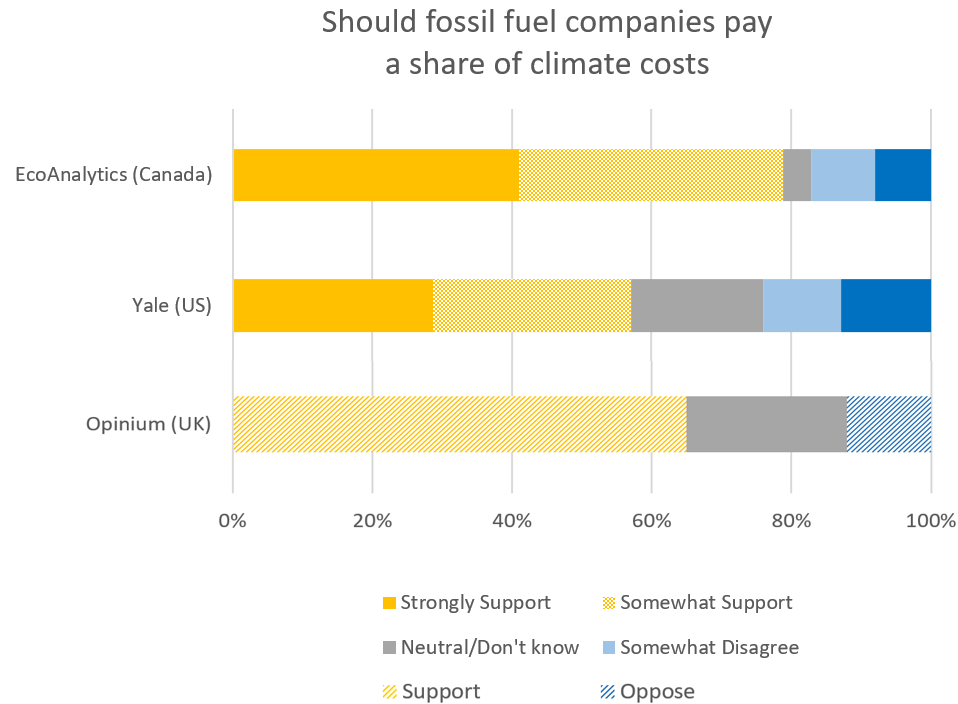 The UK poll only asked for support and opposition, while the other two polls invited respondents to indicate their level of support or opposition.

It is interesting to note that in the Center for Climate Integrity poll, respondents who learned that the fossil fuel industry had deceived Americans on climate science were 12% more likely to think that fossil fuel companies should pay a share of climate costs. This effect was not tested in any of the above polls.

Two of the polls, in Australia and Canada, asked more generally who should be “primarily responsible” for paying for climate costs. The US poll also asked a somewhat different question about who should be more responsible for those costs, between fossil fuel companies and taxpayers. These three questions are somewhat more difficult to compare because of how they characterized the answers – but all three provide further evidence that the public supports fossil fuel companies paying a share of the costs of climate change.

Perhaps not surprisingly, the terminology matters: having government pay is much more popular than having taxpayers pay. But at the end of the day, if the government is on the hook, so are taxpayers.

In addition, Canadians were less likely to buy into the idea that assigning “primary responsibility” for climate costs should be a simple choice between industry and government. When asked which group should be primarily responsible for the financial costs of climate change (governments, corporations, or individuals), 21% volunteered “all of the above” or “some combination of the above” despite this response option not being made available in the closed list read to them by the interviewer by phone.

In a similar question, Australians were much more likely to select “other” or “not sure,” further indicating a lack of comfort with the options provided. The difference between the two polls may have been partly a result of methodology – since the Canadian poll was conducted by phone, allowing respondents to articulate a choice that was not offered.

In Canada, Australia and the US, a majority of respondents agreed that the fossil fuel industry should pay a significant share of the costs associated with climate change. 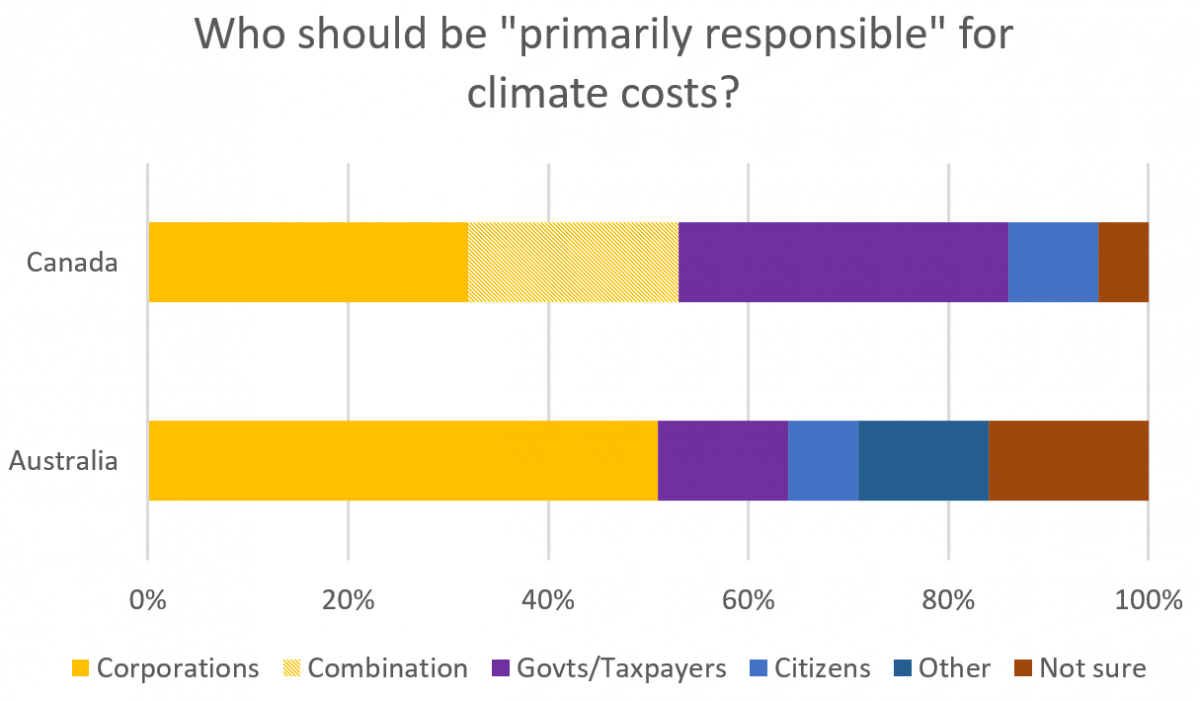 Support for legal and other action against fossil fuel companies [3]

The Canada poll only asked for support or opposition, while the US poll offered respondents a more detailed breakdown between strongly support (23%), somewhat support (27%), somewhat oppose (12%) and strongly oppose (16%). 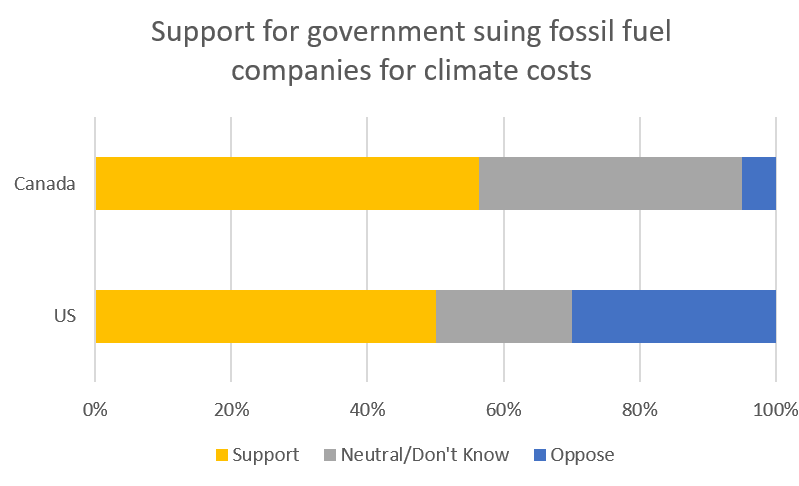 We asked a similar question in a Google Survey in 2018 and found 58% support nationally for litigation against fossil fuel companies, with over 50% support in every region except for Alberta.

The EcoAnalytics poll, in Canada, also asked about public support for governments sending letters asking fossil fuel companies to pay a share of the costs of climate change, a tool over 20 BC local governments have already used. 73% of Canadians supported their government sending a letter of this type.

Since they first learned about climate change more than 50 years ago, global fossil fuel companies – along with investors and governments – have continued producing fossil fuels in full knowledge that climate change will result. The alarming science had little effect on their business models, because they’ve always assumed that someone else will pay for the costs.

Just like Big Tobacco, this calculus persuaded fossil fuel companies to lobby against regulations that might constrain their profits, and to fund public misinformation on climate change. Because they didn’t have to pay the true costs of their products, the fossil fuel companies could outcompete renewable energy.

Not surprisingly, industry and industry associations have responded aggressively to the suggestion that fossil fuel companies need to pay anything towards the costs of climate change. They suggest that asking fossil fuel companies to pay a fair share of the costs of their products “defies common sense,” attacking elected officials and others who dare suggest that taxpayers cannot afford to pay the rising costs of climate change – billions of dollars worth – on their own.

Of course, all four of the countries where polls were conducted remain high greenhouse gas polluters (although the UK has reduced its per capita emissions dramatically). Holding fossil fuel companies accountable has to be accompanied by efforts to reduce our collective fossil fuel pollution and to provide resources to those impacted by climate change around the world.

However, these results make it clear that a majority of the citizens in Canada, the UK, the US and Australia agree that fossil fuel companies need to be held accountable for harm caused by their products – providing a strong counterpoint to the nay-sayers who want to let the fossil fuel industry off the hook.

[1] The polling questions discussed in this section asked:

[2] The polling questions discussed in this section asked:

[3] The polling questions discussed in this section asked:

Author:
Andrew Gage - Staff Lawyer
Climate and Energy
Climate Law in our Hands
Back to top