When wild salmon win – toward a renewed Fisheries Act? 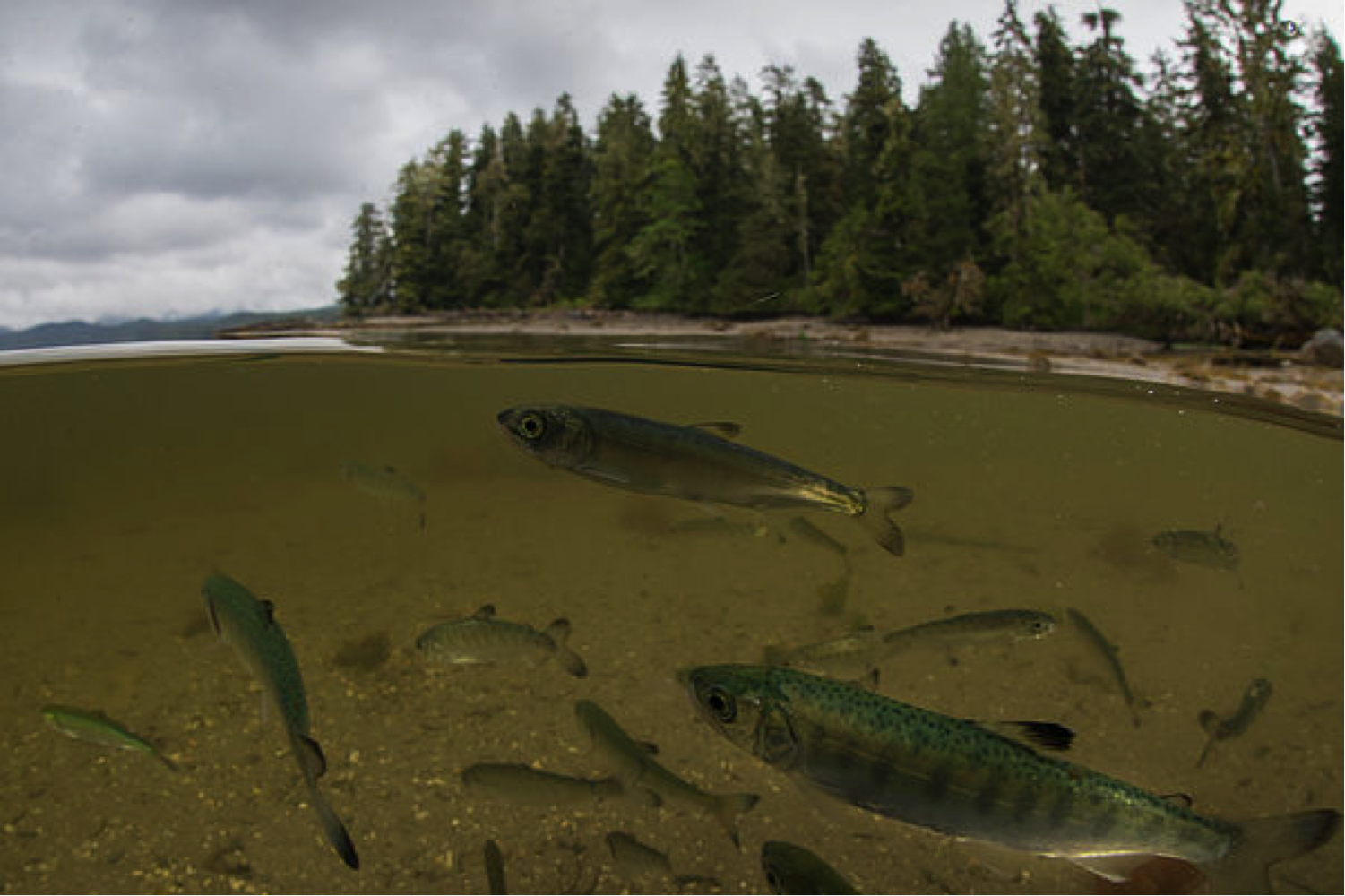 No matter how many legally binding conditions are included in the Pacific Northwest liquefied natural gas (PNW LNG) project approval, the problem is that this industrial project is just in the wrong place. For many First Nations, coastal community residents and fishers, wild salmon provide one compelling reason to oppose the project. Another is the project’s well documented climate impacts.

Based on the project’s demonstrated potential to harm critical fish habitat for Canada’s second-largest wild salmon run, the Fisheries Act should, in theory, have prevented it from ever getting this far. The fact that the Act was not a roadblock for PNW LNG approval highlights a big hole in the net of that legislation. The federal government is reviewing this statute this fall, but will it be in time for Flora Bank?

Flora Bank, located just off Lelu Island in the mouth of the Skeena River in northern BC, is a key stop for a wild salmon run that can reach 10 million salmon in a single year. This extensive sandbank and eelgrass bed is also the very site of the PNW LNG plant project approved last week.

Former fisheries minister Roméo LeBlanc used a striking analogy, “cornfields of the ocean,” to describe areas like eelgrass beds when he introduced the habitat protection provisions into law in amendments to the federal Fisheries Act in 1977:

The chain of life extending to the whole open ocean depends on bogs, marshes, mudflats, and other “useless-looking” places that ruin your shoes. Biologists have likened these areas to the cornfields and wheatfields on the ocean. These rich shore areas support salmon, lobster, herring and other local populations; their influence extends for hundreds of miles, even to the rockiest shorelines. They are the irreplaceable nurseries of fisheries well-being.

First Nations have relied on Skeena salmon for millennia and continue to do so. Christine Smith-Martin from the Lax Kw'alaams First Nation voiced her concern at the announcement of the approval, raising a glass jar of preserved salmon and asking the ministers and the premier gathered there for the photo op: “What are you going to do about our salmon?”

An astonishing 88% of salmon from the Skeena River stop twice at Flora Bank on their migratory journey from the river to the sea and back again. Flora Bank is one of the largest eelgrass beds in BC, and Fisheries and Oceans Canada (DFO) ranks eelgrass beds as among the most productive ecosystems on the planet.

The time that salmon spend in Flora Bank is crucial. It’s when they make their miraculous transformation from creatures adapted to fresh water to those adapted to the salty ocean environment. This is akin to us “learning to breathe on Mars,” says Charmaine Carr-Harris, a scientist who’s been studying Skeena salmon for years.

The eelgrass at Flora Bank is especially critical for salmon, according to peer-reviewed scientific studies such as this one, which shows that this particular eelgrass habitat has 20 times more salmon than others in the Skeena River estuary. Flora Bank is part of the rare estuary superhabitats that make up less than 3% of BC’s coastline. The BC government says that without these fish nurseries, it is likely that coastal and offshore fisheries would be a fraction of their current size.

The federal government has long recognized the importance of Flora Bank. More than 40 years ago, the Canadian Fisheries Service called it “the most important shallow water area of the Skeena River estuary in terms of rearing juvenile fishes.” In 1973 one of the first DFO studies of the region confirmed that Flora Bank was habitat of critical importance for rearing juvenile salmon, and that construction of a large project would destroy much of this critical habitat.

But there are discrepancies in federal government scientists’ opinions on this issue. The final PNW LNG Environmental Assessment Report records DFO’s opinion that Flora Bank is unique and ecologically important. Yet DFO concluded that the impacts on fish habitat from construction and operation of the liquefaction facility, transmission line, suspension bridge, trestle and marine terminal directly on top of Flora Bank could be mitigated.  DFO accepted the PNW LNG proponent’s modelling, which forecast that the project’s construction and operation would not result in “serious harm to fish” as described in the Fisheries Act. Other scientists disagree with this conclusion.

The federal government also relies on the LNG project’s promise to offset any harm that does occur, by constructing or restoring new fish habitat elsewhere, one of the 190 conditions in the decision statement made under the Canadian Environmental Assessment Act. Many, like the Lax Kw’alaams and other First Nations, question the notion of offsetting, particularly for extraordinary places like Flora Bank.  Scientists like Jonathan Moore and Charmaine Carr-Harris, as well as Jennifer Gordon, are skeptical as well. On the basis of their research, which involved more than 100 boat days, 500 net hauls and sampling of nearly 200,000 fish, they concluded “that habitat mitigation will be unlikely to succeed” due to the pronounced preference of many salmon for the unique features of Flora Bank over other habitat areas.

Laws control our behaviour and rule our relationship with the natural world.  It’s time to look at how well these laws work. The oceans need emergency care: we’re stripping the ocean of its creatures — or, to use the scary scientific term, we’re embarking on marine defaunation.

From science and Indigenous knowledge, we know that we need to protect places like Flora Bank. What’s missing is the translation of that knowledge into law and policy to support sound decision-making. The failure of the Fisheries Act to spare Flora Bank from development reveals its inadequacy.

Fortunately, the federal government has pledged both to restore lost protections and to introduce modern safeguards to the Act, so our wild fisheries, the envy of the world, can flourish, play their vital role in our ecosystems and feed us for generations to come. On September 19, the House of Commons Standing Committee on Fisheries and Oceans passed a motion to review and study the scope of application of the Fisheries Act, and it will pay particular attention to the prohibition on serious harm to fish.

Ideally this review would be based on a solid evidence base, but the committee’s timeline is short: its report is due to be submitted to the House of Commons no later than February 28, 2017.

To truly prevent “serious harm” to fish, the law needs to keep development away from the areas that they need for life processes. It needs to pay special attention to estuaries and places like Flora Bank.

Legal solutions are at hand. Our brief “Scaling Up the Fisheries Act” argues for essential fish habitat to be identified and protected. DFO’s own scientists acknowledge that “it is simply not possible to compensate for some habitats.”  It follows that some essential fish habitat should not be destroyed or damaged under any circumstances.

Of all the protection options available for Flora Bank and Lelu Island under Canadian and Indigenous law, place-based planning deserves wider application.  This type of planning will identify biodiversity hotspots for fish and restrict development in those areas, whether under the Fisheries Act or other planning processes.

The Marine Planning Partnership (MaPP), co-led by a unique First Nations-Government of BC governance structure, is an example of place-based planning. With little fanfare, MaPP created Canada’s first large-scale ocean zones for BC’s north and central coasts, approved last year. Some sensitive areas in the Skeena estuary were zoned for heightened protection. Flora Bank fell just outside the MaPP boundary, as it lies in the federally controlled areas of the Prince Rupert Port Authority, and the federal government did not participate in MaPP. However, the federal government has now promised to re-engage with MaPP.

Place-based planning deserves more attention in a renewed federal Fisheries Act. The Act now contains regulation-making powers to designate “ecologically sensitive areas,” which includes regulatory restrictions on development.  Those powers have not yet been tested. Flora Bank would have been a prime candidate for such a designation.

A revitalized federal Fisheries Act will strengthen habitat protection, and so protect areas like Flora Bank as banks for future fish. The removal of the Act’s prohibition on habitat alteration and damage was widely decried by hundreds of scientists, and the reversing of this prohibition is a logical first step.

The Act should also restrict the use of offsetting. It’s hubris to think that we can replace, rebuild or recreate habitat on the scale of Flora Bank or the Skeena estuary. Studies show that offsetting’s ability to replicate ecosystem function is limited.

To use the words of the father of our current fisheries minister: “Protecting fish means protecting their habitats…They are the irreplaceable nurseries of fisheries well-being.”