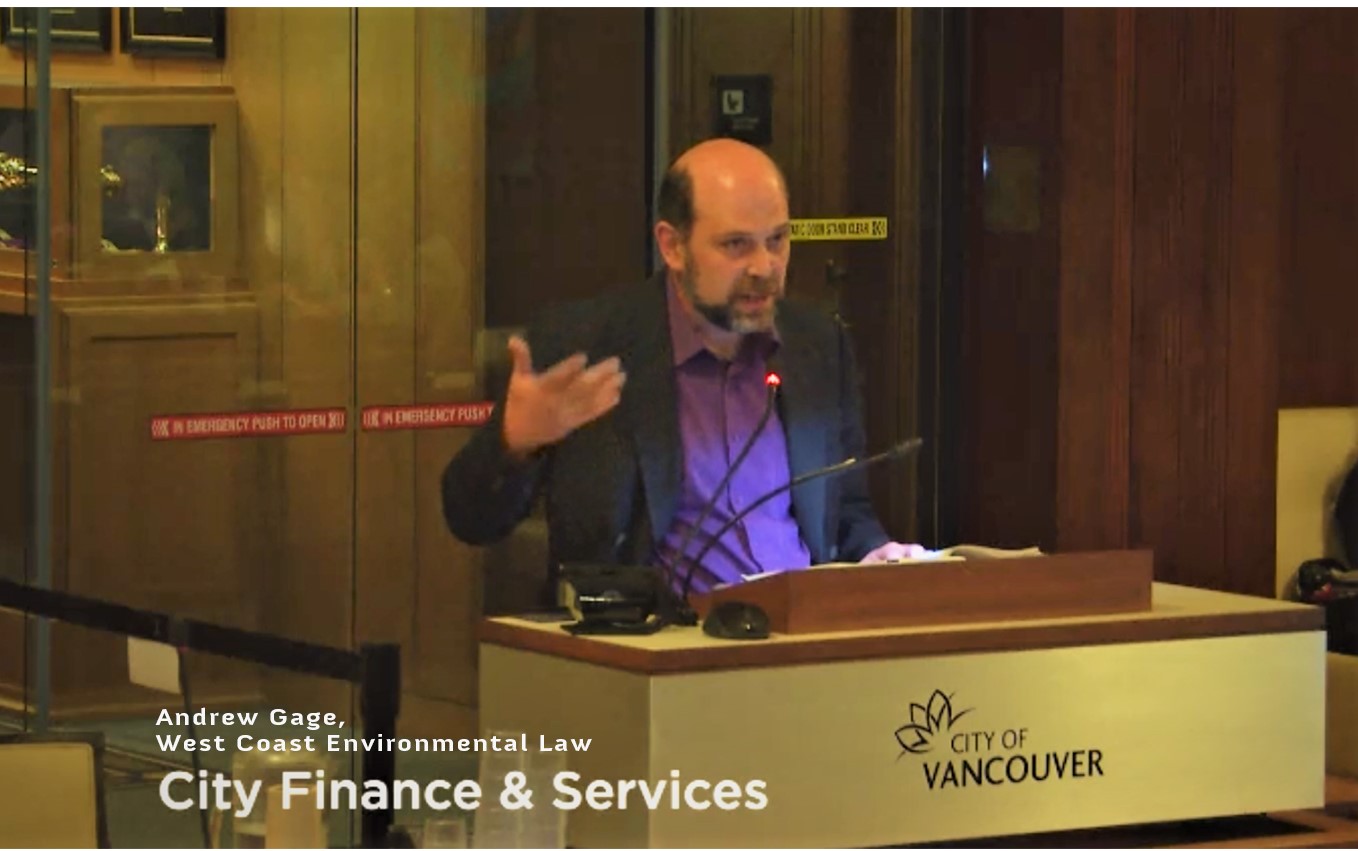 The last week in June was a big week for those of us who would like to see BC communities hold fossil fuel companies accountable for the costs of climate change. The Cities of Vancouver and Richmond, the largest and fourth-largest cities in BC, both voted to take action to ensure that fossil fuel companies share in the climate costs caused by their products.

We’ve written a lot about how why these types of actions are necessary: As we’ve seen in the 50+ years since Exxon and Shell became aware of the risks of climate change, the industry will work against climate action as long as it believes that it can make massive profits without paying for the resulting costs. Meanwhile, our communities are increasingly seeing scarce taxpayer dollars go towards dealing with the climate costs caused by their products.

But we’re getting tired of hearing our own voices on this topic (if you aren’t tired of hearing us, click here to watch my presentation to Vancouver Council). So it was very exciting to hear all the new voices that came out to speak to Vancouver Council about the importance of holding fossil fuel companies accountable. Indeed, most of them came out twice, coming back on Thursday, after Council ran out of time to hear from them on Wednesday.

This post quotes just a small piece of the more than an hour and a half of presentations made by more than a dozen speakers. Apologies to those that I don’t quote – your presentations were all excellent and very appreciated.

One exciting development leading up to the Vancouver vote was the release of a letter, signed by 28 Canadian law professors, encouraging Canada’s local governments to look seriously at legal action against fossil fuel companies. UBC’s Professor Stepan Wood was one of the co-authors of the letter and spoke to Council:

“Some say that it's inappropriate for local governments to even explore the option to recover a portion of their climate costs from the global petroleum giants. And we say it's not only appropriate, but imperative for you as prudent managers of public funds and infrastructure to explore all reasonable avenues to recover these costs so that they don't fall entirely on taxpayers.

… A lot of people say litigation is too slow, cities should pursue quicker solutions like for instance eliminating the fossil fuel subsidies. Certainly litigation is slow, but as part of a multi-prong strategy, it can be very effective in kickstarting wider changes even in its very early stages.

And one of the things about subsidies is first of all: elimination of subsidies will affect future emissions, but it won't do anything to address recovery of costs for the harms that are set in motion by past emissions. And that's what litigation can do. …

Some people also say that climate litigation is frivolous, but we, as the experts, say that it has a credible legal basis and a real chance of success which could be further enhanced by federal or provincial legislation clarifying certain matters.

Some say that it's hypocritical, and certainly as many people have said tonight, responsibility for climate change is shared. But the companies that make and sell the fuels that they know to cause climate change while resisting regulation and misleading the public about the problem must bear some responsibility for the resulting costs and that fair share can be determined by the courts.

“Accountability. As a teenager, this is something that I’m very familiar with.

And that is fair. That’s how the world should work.

When someone is held accountable, it gives them an opportunity to see what they’ve done, who it has affected, and what needs to happen to make up for that. It is basic responsibility. To be able to live up to your mistakes.

Responsibility is an integral foundation of being a compassionate and wise human-being, something we should all strive to be.

So, why’s it thrown to the wayside when it comes to people with big money, and people with power. And I’m talking about fossil fuel companies.

In their world, they make mistakes, fund misinformation campaigns to pretend it didn’t happen, and then leave the mess to us, walking away with money in their pockets. They’re causing harm to us and our environment. Our world. Disrespecting and destroying the sole reason we exist. And actually the reason that any of us are able to be here today.

They are destroying all of this with no consequences what-so-ever. We actually end up getting the consequences and we pay for them.”

Similarly, Uma Le Daca-Jolicoeur, also 16, saw a contradiction between the changes that climate change is inflicting on her life, compared to the low expectations that fossil fuel companies will change their ways:

“As a young person who is part of the generation most affected by climate change, I have learned to deal with the fact that I will need to make radical shifts in my life. That maybe my choice of where I attend university will be limited. That maybe living where I want to won’t be a possibility in the future. That having kids one day could be cruel because of the world they would grow up in.

And the hard thing about this is that people like me aren’t the main contributors to climate change, fossil fuel companies are.

So why wouldn’t the people with the biggest footprints and the most power be held accountable to make repairs on damage that they are inflicting.

The way I see it is: paying their share is the least that they can do. The people with the most power are not doing their part. Are not even taking responsibility for their actions. Are not making crucial changes and as a result, jeopardizing my entire future.”

Le Daca-Jolicoeur also saw clearly why making fossil fuel companies pay would have an effect on their behaviour – forcing them to make those changes:

“Companies and people who are profit driven will modify their actions the most quickly if they see the difference in their pocket books. The moment they realise that acting irresponsibly when it comes to the environment will cost them, they will stop.”

For more thoughts from teenagers talking about holding fossil fuel companies accountable, and the experience of talking to Council, check out a recent episode of the Planet Potluck podcast, recorded after the Council meeting.

Also speaking passionately to Council in favour of the motion were parents of young children who see accountability as a tool to address the climate emergency that we’re in.

In addition to youth who were worried about their future status as taxpayers, some current taxpayers spoke about the importance of seeing fossil fuel companies share in the harm that their products have caused. Yvon Raoul said:

“I’m also here because I’m a taxpayer. But you know what: I don’t mind paying taxes. We … classify ourselves as a civilized nation. That’s because we pay taxes, it’s because realise that we have things in common and we have to share things. … So I don’t mind paying taxes. But I resent the fact that some of my taxes will go to subsidize the oil barons. And I will get even further mad, because these people, when they make a mess, we have to cover the costs. That is simply not fair. My parents taught me that. I taught this to my kids. And I’m sure that your parents taught you the same thing too.”

Questions from the Council

We would like to thank all of the Councillors (even those who voted against the motion) for grappling with the important and fundamental questions implicit in the desire to hold fossil fuel companies accountable.

In particular, there were a series of questions raised about whether it makes sense to hold fossil fuel companies accountable for some portion of the City’s climate costs, and if so, why. For example, Councillors Bligh and Kirby-Young both (respectfully) challenged Luca Pan’s striking analogy of holding someone accountable for writing on desks. Bligh asked whether the centrality of fossil fuels in our lives should make fossil fuel companies less responsible than tobacco or opioid manufacturers, while Kirby-Young asked Pan whether he felt that the manufacturers of crayons should be held accountable – or only the person who actually wrote on the desk.

Pan agreed that crayon manufacturers would not be liable “unless on the package it said, ‘write on your desk.’” This is an interesting point, given that oil and gas companies generally sell their products with the full knowledge and for the express purpose that they will be burnt and end up in the global atmosphere (unlike, presumably, most crayon companies, which generally intend their products to be used on paper.)

This point was developed further when Councillor Boyle asked another speaker, Grace Nosek, a specialist in climate communications, about the history of the message that responsibility for product use should rest with individuals – and not the manufacturers of the products. Nosek replied:

“That is a corporate narrative. … [I]t started with the tobacco industry. And what they said was: this is a personal choice. You chose to use tobacco so you cannot sue us, and you cannot hold us liable. And they used this really powerful PR and legal framing to do that, and so it took a while for the public to understand that actually, this wasn’t an individual choice, because for decades the tobacco industry had come together to undermine the science around the links between tobacco and lung cancer and many other problems.

It was only actually through litigation that we really discovered that malfeasance and how far it went and how long it had been happening. But it’s been reported that hundreds of millions of people died because of that framing and the inability of government to take action and because the tobacco industry refused to tell the pubic what was happening and what their products did.

And now in a similar analogy, we’re seeing that many of the fossil fuel industry members knew, truly for decades, what was happening and took really comprehensive steps to undermine that.

So just one example is: A 1982 Exxon internal document says: “There are some potentially catastrophic events that must be considered from climate change. For example, if the Antarctic ice sheet which is anchored on land were to melt, this would cause a rise in sea level in the order of 5 metres.”

That’s 1982, an Exxon internal document. In 2000 Exxon said publicly: “Just as changeable as your local weather forecast, views on the climate change debate range from serious to trivial and from seeing the possible future impacts as harmful or beneficial.”

The closing word for this post goes to the last public speaker that Council heard before they voted 7-4 in favour of the motion. Helen Brown, an academic librarian and the mother of 2 girls, the youngest of whom she wore in a baby carrier as she presented, emphasized why this motion matters:

“Legal action, or even the possibility of legal action, can change industries, making their actions safer, fairer and more responsible. Making sure that these options are available can have positive impacts, and we have seen that happening already. This motion is a positive response to the climate emergency …”