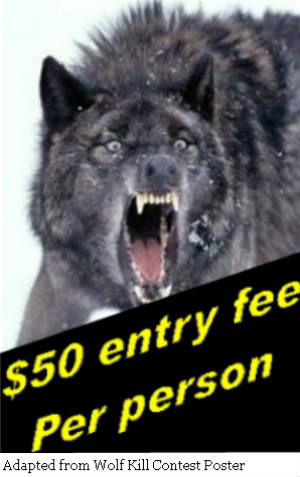 “British Columbians should be furious that our government continues to allow wolves to be killed for money, prizes and other illegal lottery schemes when it is clearly against the law to hold a contest of this nature.” – Ian McAllister, Pacific Wild

You may have read in the papers about a controversial contest in Fort St. John that aims to encourage hunters to kill more wolves.  Hunters enter for $50, and then can win thousands of dollars for wolf carcasses that they submit to the contest organizers.  With an open bag limit for wolves in much of the region, contest organizers have said that their aim is to drive up the number of wolves killed as a way of controlling the wolf population.

Not surprisingly, this contest has been controversial – drawing calls for a tourism boycott and vocal criticism from several conservation organizations.

The legal advice we provide often remains behind the scenes.  But today Pacific Wild, one of the most vocal critics of the contest, released a legal opinion that we had prepared on their behalf, and sent to the BC Gaming Branch, suggesting that the Wolf Kill Contest was illegal without a gaming event licence under BC’s Gaming Control Act.  Check out the coverage in the Vancouver Sun on Dec 17th:

B.C. gambling officials erred when they concluded a private wolf-kill contest underway this winter in the northeast Peace region does not require a permit, a legal opinion obtained by an environmental group asserts.

West Coast Environmental Law says in an opinion for Pacific Wild that it believes the contest is “in violation of the gaming provisions of the Criminal Code of Canada” and therefore “would require a gaming event licence under the Gaming Control Act to be legal.”

Rich Coleman, B.C. minister in charge of gambling, would only say: “We just received the letter and are reviewing it.”

Pacific Wild had earlier argued that the contest was illegal without a licence from the Gaming Branch, but had been rebuffed by provincial officials, who insisted that they only regulate games of pure chance.

The trouble is: that’s not what the BC Gaming Control Act says.  As we explain in our opinion, the definition of “gaming event” in the BC Act refers to related sections of the Criminal Code of Canada which, in turn, deal with various types of “lottery schemes.” Some of the “lottery schemes” which are regulated involve games of pure chance, but some do not.  Read our letter to the BC Gaming Branch for the technical details about why the wolf-kill contest is a lottery scheme and requires a provincial licence, but we conclude:

… [W]e disagree with [the government’s] assertion that the Gaming Control Act applies only to lottery schemes that are based upon chance. The case law clearly indicates that a pyramid-like scheme, like the one implemented in the Contest, constitutes a lottery scheme under section 207(4) of the Criminal Code, and therefore falls under the definition of “Gaming Event” in the provincial Gaming Control Act. Similarly, a draw for prizes, even held in the context of the Contest, would appear to be a lottery scheme.

We note that without the required Provincial Licence for such an event, it would appear that the Contest is operating in violation of the Criminal Code.

Of course, pointing out that this wolf-kill contest is illegal under BC and federal laws dealing with gaming is a very indirect way to get an environmental win (even assuming that the province does the right thing and halts the contest).  It’s possible that our opinion could have an impact on this year’s hunt, and it’s certainly resulting in some additional publicity about the controversy surrounding the hunt.  However, in the long run we need laws that ensure that wildlife are not subjected to contests that could boost hunting to unsustainable levels.  As we explained in the letter:

The BC government, to the extent that their wildlife management decisions are based in sound science, must base hunting quotas on an estimate of current species populations, and the likely take by hunters. Boosting the number of hunters could certainly skew these figures, and undermine good wildlife management.

This is particularly the case when the Contest itself seems to be intended to reduce wolf populations, based upon an anecdotal and unscientific impression of the species numbers. We are alarmed by the quotes attributed to the President of the North Peace Rod and Gun Club to the effect that the Contest is an explicit attempt – not by government but by a hunting organization – to “reduce the number of wolves.” Managing for “sustainable numbers” of wolves is not the responsibility of local hunters, but of the BC government.

In our view the BC government needs to ensure that it has rigorous population data for wolves and other species, and should ensure that a precautionary approach is taken to managing wildlife species. To the extent that contests such as this one may undermine sustainable management of wildlife, it may be necessary to consider whether they should be regulated.

At the end of the day, gaming laws seem ill suited to address these concerns.  Perhaps we need new laws to ensure that private contests do not undermine the management of BC’s wildlife.

There are also important questions about the level of information that the province has, and the approach it is taking, related to its plans for the management of wolves.

West Coast Environmental Law is not anti-hunting.  But we do object to this type of contest – which doesn’t just encourage hunting, but which is actually an attempt by private interests to suppress the populations of particular species.  Such contests have the potential to undermine wildlife management and protection, and is no way based on the responsible stewardship that many hunters take so seriously.