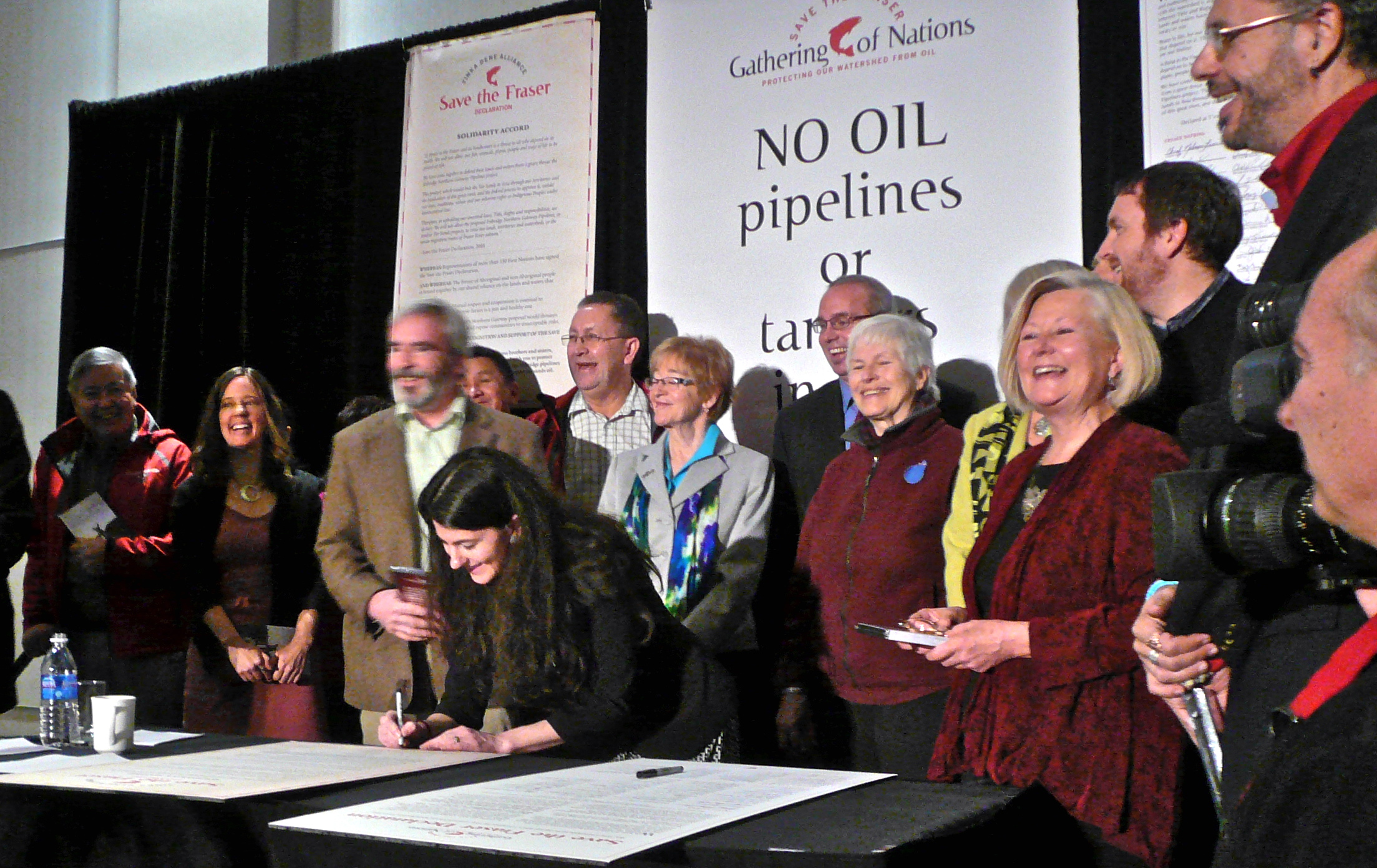 On Thursday, December 5, 2013, members of the Yinka Dene Alliance, a group of six First Nations in northern BC who have banned the Enbridge Northern Gateway Pipelines from their territories, held an anniversary celebration for the Save the Fraser Declaration in Vancouver. The anniversary consisted of the addition of a new First Nations signatory to the Declaration as well as the launch of the Save the Fraser Solidarity Accord, where a diverse range of Canadian organizations and individuals committed to stand with First Nations that have banned Enbridge’s Northern Gateway from their territories.  West Coast Environmental Law Association was honoured to be there to sign the Accord.

For those who are unfamiliar, the Save the Fraser Declaration is a document based in Indigenous law which bans tar sands crude oil tankers, pipelines and infrastructure from the signatories’ territories. The Save the Fraser Declaration, in addition to the Coastal First Nations Declaration, also signed in 2010, were prompted by the Enbridge Northern Gateway oil pipelines and tankers proposal, a project which would include the construction of two pipelines stretching from Bruderheim, Alberta, all the way across Northern BC, ending at Kitimat on BC’s coast. The diluted bitumen would then be loaded onto supertankers and shipped out to international markets.

Ever since December 2010, when sixty-one signatories announced the Save the Fraser Declaration, the Yinka Dene Alliance has traveled far and wide with the Declaration, gaining the support of First Nations from BC and across Canada. Since that time, the signatories of the Declaration have grown to include representatives of over 130 First Nations. There is legal support for First Nations’ authority to issue a ban on tar sands pipelines and tankers in their territories based in their own ancestral laws, in Canadian constitutional law, and in international law (for more detailed information on the legal significance of these declarations, click here).

By now, most readers of this blog will be familiar with the wide range of environmental threats Enbridge’s proposed project presents. The pipelines would cross over 1,000 rivers and streams in BC, including the headwaters of the Fraser River and the Skeena River, B.C.’s two largest wild salmon watersheds. An oil spill in these waterways could mean serious damage to fish habitat. Besides the pipelines, the oil supertankers, nearly as long as the Empire State Building is tall, would have to navigate the tight passageway of the Hecate Strait, known for its rough and dangerous weather. An oil spill in these waters could be near-impossible to clean up, which was acknowledged in a recent report commissioned by the BC government, and would put the health of BC’s coastal waters, and the thousands of fishing and tourism jobs that depend on them, at risk.

For the signatories of the Save the Fraser and Coastal First Nations declarations, the risks that this project presents to the lands and waters in their territories are simply too much to allow. They have been at the forefront of the public opposition to the Enbridge Northern Gateway proposal, and they certainly aren’t alone. Non-First Nations opposition to the project in BC has been fierce.

Representatives of more than 130 First Nations have signed the Save the Fraser Declaration.

The future of Aboriginal and non-Aboriginal people  is bound together by our shared reliance on the lands and waters that sustain us.

Mutual respect and cooperation is essential to ensuring that our collective future is a just and healthy one.

NOW THEREFORE, IN RECOGNITION AND SUPPORT OF THE SAVE THE FRASER DECLARATION:

We, the undersigned, say to our First Nations brothers and sisters, and to the world, that we are prepared to stand with you to protect the land, the water and our communities from the Enbridge pipelines  and tankers project and similar projects to transport tar sands oil.

To read the full text of the Solidarity Accord, click here.

West Coast Environmental Law Association Executive Director and Senior Counsel Jessica Clogg signed the Solidarity Accord – West Coast has been deeply involved in providing legal assistance to First Nations, non-governmental organizations and citizens who seek to use the law to protect their lands and waters from the threat of oil spills, and we were happy to add our name to the list of organizations and individuals that have publicly pledged to do whatever is in our power to support the signatories of the Save the Fraser Declaration in their opposition to this project.

West Coast Environmental Law Association was joined by an impressive list of supporters of the Solidarity Accord. Speakers in support of the Accord included: Gavin McGarrigle, the BC Area Director of Unifor, Canada’s largest private sector union which represents over 300,000 Canadian workers, including tar sands workers; Jim DeHart, President of the BC Wilderness Tourism Association, an advocacy organization composed of a wide range of tourism businesses across BC; Dr. Warren Bell on behalf of the Canadian Association of Physicians for the Environment, which represents 6,000 physicians; and Jim MacDougall, mayor of Fort Saint James.  Others to sign the Solidarity Accord included the BC Teachers’ Federation; former federal Fisheries and Oceans Minister and Environment Minister David Anderson; Adrianne Carr, Vancouver City Councillor; Spencer Chandra-Herbert, MLA Vancouver-West End; and a host of others.

On the same day the Yinka Dene Alliance also launched Holdthewall.ca, an online platform where people can sign up to pledge their support to the signatories of the Save the Fraser Declaration. As of Monday, December 16, this online solidarity accord has received over 11,000 pledgers.  It was a powerful moment for us to be a part of the anniversary event and to see the bonds that are being forged between such a diverse range of powerful allies to stand with First Nations in upholding their Indigenous law ban on Enbridge’s Northern Gateway project.