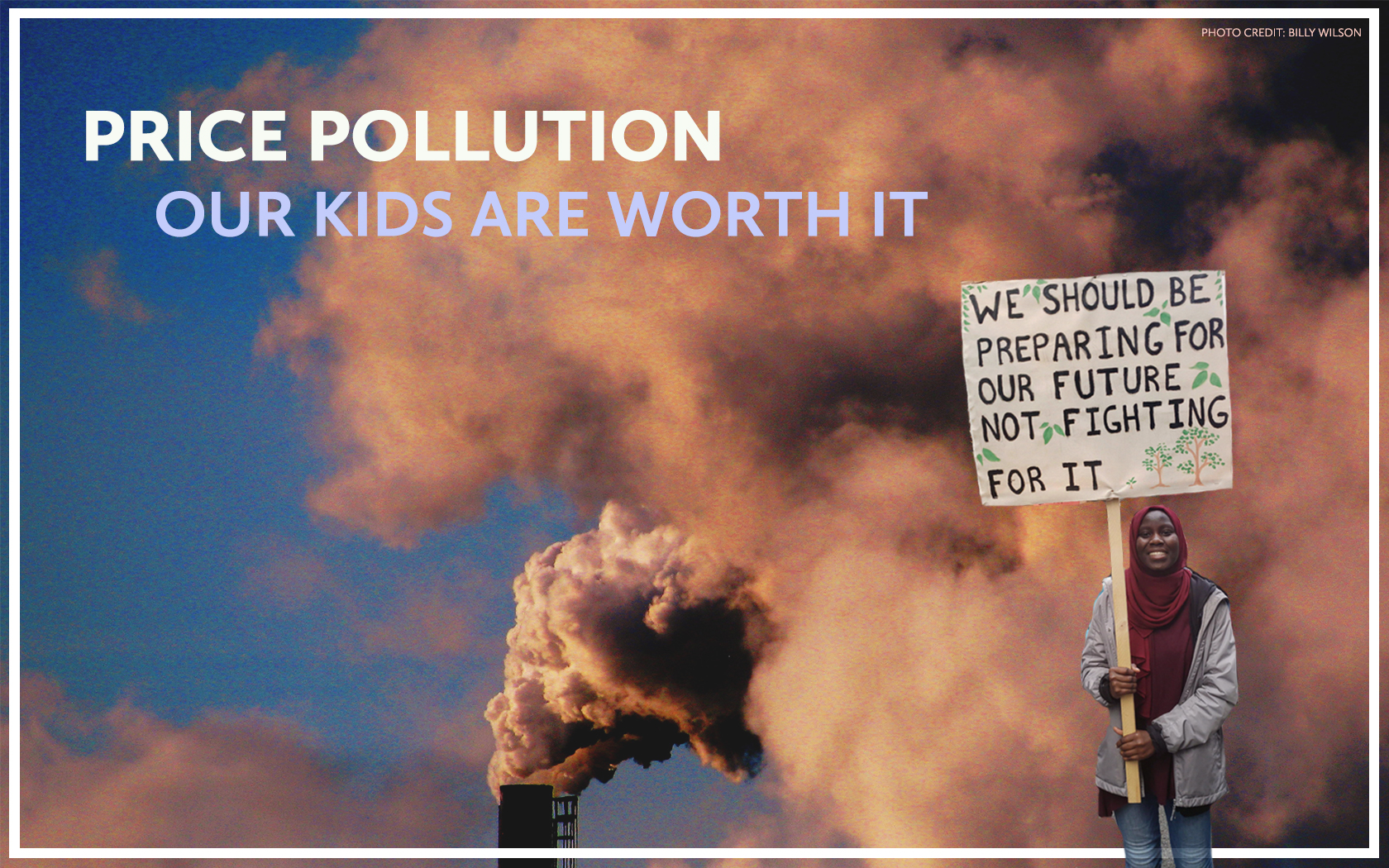 May 3rd, 2019 was a great day for climate action. That Friday, as youth across the country went on strike to protect their future, the majority of the Saskatchewan Court of Appeal ruled that the federal government’s Greenhouse Gas Pollution Pricing Act (the Act) is constitutional.

The ruling was the result of a court challenge launched by the Saskatchewan government, with a similar case brought by the government of Ontario. Both provinces oppose the national price on carbon, and argue that the federal government doesn’t have constitutional authority to impose its carbon pricing regime on provinces because it offends the principle of “federalism.”

Generation Squeeze, which intervened in the court case with support from our Environmental Dispute Resolution Fund (EDRF), was delighted with the ruling.

“It’s a win for intergenerational fairness and the health of Canadians,” said Paul Kershaw, founder of Generation Squeeze.

While affirming Generation Squeeze’s position that the “federalism” argument should be rejected, the majority of the Saskatchewan Court of Appeal also held that climate change has emerged as a major threat, not just to Canada, but to the planet itself.

Our Constitution is a living document – or to use the legal term of art, a “living tree” – that must be interpreted in a manner that is fully responsive to emerging realities. With this in mind, the majority of judges came down strongly in favour of a flexible and co-operative approach to tackling the climate crisis:

If it is necessary to apply established doctrine in a slightly different way to ensure both levels of government have the tools essential for dealing with something as pressing as climate change, that would seem to be entirely appropriate. It is also in keeping with what the Supreme Court has said about the utility of, where possible, allowing both Parliament and the provincial legislatures jurisdictional room to act in relation to the environment.

Importantly, there was no space for climate denialism in this judgement. The two judges (out of 5) who thought the Act was not constitutional still agreed that greenhouse gas (GHG) emissions cause climate change. For the judges in the minority, the reality of anthropogenic climate change and the urgent need to reduce our GHG emissions were not at issue in this case; they were facts, “proven and true.”

It might not seem like it now, but Canada’s carbon pricing legislation was the direct result of extensive consultation with the provinces.

In March 2016, Canada’s First Ministers meeting agreed to the “Vancouver Declaration on Clean Growth and Climate Change,” which was to form the basis of further consultations to develop a Pan Canadian Framework on Clean Growth and Climate Change. The Declaration recognized carbon pricing as an important tool being used by governments to address climate change, and committed the First Ministers to adopt “a broad range” of measures to reduce greenhouse gas emissions, “including carbon pricing mechanisms.”

And then in December 2016, the Pan Canadian Framework (PCF) was signed by the federal government and 11 of the premiers, explicitly agreeing to a national carbon pricing mechanism. The Ministers described carbon pricing as a “pillar” of the PCF, writing:

Pricing carbon pollution is an efficient way to reduce emissions, drive innovation, and encourage people and businesses to pollute less. However, relying on a carbon price alone to achieve Canada's international target would require a very high price.

In fairness to Saskatchewan, it never signed the PCF (although it did sign the Vancouver Declaration). However, since 2016 Manitoba, Alberta and Ontario have all withdrawn from the agreement. If Canada is going to make progress on climate change, agreements between the premiers must not be thrown out every time a government changes or a Premier changes their mind.

Critics of the federal legislation tend to skip over the fact that the federal government is not intending to keep the money, but instead will give a rebate through income taxes. They also tend to ignore analysis that suggests that pricing carbon has worked in BC and elsewhere. (This is not to say that a $50/tonne carbon price is anywhere near adequate by itself to achieve even the PCF’s GHG reduction targets – which are weak).

Saskatchewan asked its Court of Appeal to review the federal government’s legislation, and since then Ontario has done the same. In addition, Manitoba has launched a judicial review of the Act in the Federal Court. Saskatchewan’s Court of Appeal is the first to issue its decision.

The Saskatchewan case was focused on the Greenhouse Gas Pollution Pricing Act’s “federal backstop,” which allows the federal government to impose a minimum pricing regime on GHG emissions in provinces that do not introduce their own regime, or introduce one that is too weak. The government of Saskatchewan took issue with this ability, arguing that it did not respect the division of powers between the federal and provincial governments and therefore upset the balance of federalism.

The Court rejected this argument, explaining that the principle of federalism is not a free-standing concept that can override an otherwise validly enacted law. Rather, it is a value to be taken into account when interpreting the Constitution.

The majority of the Court rejected this argument too. The Act is not a tax, they said, because the purpose of taxes is to raise revenue for general purposes. The purpose of the Act is not to raise general revenue; rather, the Act’s purpose is to set minimum national standards for GHG pricing regimes.

Crucially, the Act could achieve its purpose without raising a single cent, if all the provinces put in place their own GHG pricing regimes that were equal to or better than the federally imposed minimum standard. If the Act can achieve its purpose without raising any money at all, the judges reasoned, then it cannot be a tax for constitutional purposes. And in any event, they continued, even if they were wrong and the Act is a tax, it does not run afoul of the Constitution’s rules regarding taxes.

Having determined the purpose of the Act, the final step was for the Court to determine whether the federal government has the power under the Constitution to regulate in that area.

While it acknowledged that climate change is an emergency in the way that the word is typically used, the Court noted that the “national emergency” doctrine was developed with emergencies like wars in mind. As such, it can only authorize temporary legislation, and there is no suggestion that the Greenhouse Gas Pollution Pricing Act is only meant to be temporary. We would add that climate change is not a temporary threat – it has been building for centuries and will affect us for hundreds, if not thousands of years to come.

The “national concern” doctrine, however, applies both to new matters which did not exist at Confederation, and to matters that may have originally been local or private matters under provincial jurisdiction, but have since grown to become matters of national concern.

The majority of the Court held that minimum GHG prices – or more specifically, the “establishment of minimum national standards of price stringency for GHG emissions” – is now an issue of national concern. Therefore, the federal government can enact laws on this issue.

An early victory, but just the beginning

This is an important early victory for GHG pricing in a campaign that will almost certainly end up before the Supreme Court of Canada. There is much to celebrate here.

The Saskatchewan Court’s majority decision reflects a thoughtful and balanced application of constitutional tools to address a threat that no one foresaw at the time of Confederation. The fact that climate change is real and happening now was not in doubt for any of the five judges on the court. All of them agreed that anthropogenic GHG emissions have a causal effect on climate change.

The majority of the Court clearly understood that we need to take action now, and that the status quo needs to evolve if we are to adequately address this existential threat.

But it was a narrow victory – the Saskatchewan judges split three to two. The minority would have thrown out the Greenhouse Gas Pollution Pricing Act. This is a time when we have to act decisively if we’re going to have a hope of limiting climate change to 1.5 degrees Celsius.

It’s important to name what’s at stake here: we are fighting for a livable planet. Canada’s youth are demanding action on climate change like never before. They show why it is so important for Canada not to stop at an inadequate $50/tonne price on carbon, but instead continue working with the provinces and upping Canada’s climate ambition. Every month counts now, and delay in taking action is almost as dangerous as denying that action needs to be taken.

The Ontario and Manitoba challenges to the Act are still underway. However, we are confident that the federal government has the constitutional authority to impose a price on GHG emissions, and that each of these legal challenges – as well as the Supreme Court of Canada – will affirm this.