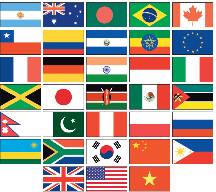 The Global Legislators’ Organization (GLOBE International) is made up of elected representatives from around the world.  Last Monday (January 14th), GLOBE released its GLOBE Climate Legislation Study (3rd Edition) – examining the climate-related legislation that is in place in 33 countries that collectively represent 85% of global emissions.  Canada was singled out as the only country which had “regressed” since the first and second edition of this study.

A key indicator in the report is whether a country has “flagship” legislation – laws intended to implement a coherent climate change strategy.  The report explains:

For most countries we have been able to identify a flagship law – a piece of legislation or regulation with equivalent status that serves as a comprehensive, unifying basis for climate change policy. Changes in flagship legislation are therefore particularly significant. They constitute a step change in a country’s approach to climate change.

In 2012 four countries passed new flagship legislation, compared with seven in 2011.  They are El Salvador, Kenya, Mexico and Pakistan.  In contrast, Canada has repealed the Kyoto Protocol Implementation Act and therefore no longer has a flagship law on climate change.

The report does discuss some Canadian legislation that touches on climate change in a piece-meal fashion, as well as highlighting positive action by Canadian provinces:

Despite the lack of comprehensive federal legislation in Canada, Canadian provinces have been very active in passing their own climate legislation. British Columbia and Quebec have introduced economic incentives to reduce emissions, such as a carbon tax (up to Can$30 [US$31.5] in 2012 in British Columbia). …. Ontario passed a comprehensive Green Energy and Green Economy Act in 2009, created to expand renewable energy generation, encourage energy conservation and promote the creation of clean energy jobs. … Cap‐and‐trade schemes have been introduced by three provinces, representing 75% of Canadian population – Ontario, Quebec and British Columbia. Alberta’s climate change plan also relies upon intensity‐based targets, with a commitment to reduce GHG emissions intensity by 50% by 2050…. It relies on energy efficiency, carbon capture and storage and renewable energy production.

On the whole, the report is a diplomatic one – written for legislators who certainly would not want their own legislation reviewed too critically.  It never comes out and says: “look what those backsliders in Canada are doing.”  But at the same time, this is the unmistakable subtext of the report’s comments about Canada (a message that is clearly at odds with the rose-coloured message – look at all the great work the world’s governments are doing on climate change – that seems to be the main speaking point for GLOBE delegates - see the embedded video below.)

What about a Canadian Climate Change Act?

So what about Canadian flagship legislation on climate change?  Last spring, Bill C-38:

Clearly Canada needs something more than a “trust-us, we’ll get around to passing sector-specific GHG regulations”approach.  The fact that the government seems bound and determined to characterize any GHG regulations that have the effect of pricing carbon as a carbon tax, while ignoring the cost-increases caused by its own promised GHG emissions, does not bode particularly well for a new Canadian Climate Change Act.

However, a spike in public interest in climate change in 2007 was enough to convince the Conservative Party to promise a Cap and Trade system to regulate GHG emissions (a promise that they never delivered on and now deride as a carbon tax).  So public pressure can work wonders.  And we know that conservative governments can be leaders, not laggards, on climate change.

Hopefully when the 4th edition of the Globe Report is released, it will be possible for Canada to rejoin the ranks of respectable nations as a country which, at a bare minimum, has a flagship act and a meaningful plan for reducing our GHG emissions.