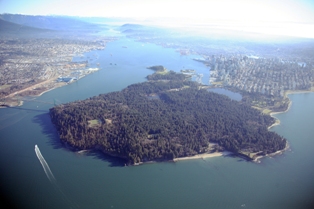 West Coast Environmental Law applauds two of Vancouver’s elected bodies – Vancouver City Council and the Vancouver Parks Board – for passing resolutions to take a formal position on the proposed Kinder Morgan oil pipeline expansion project, and associated oil tanker traffic. West Coast Environmental Law, along with several other groups, made submissions recently to both the Parks Board and City Council on the importance of local governments – the elected bodies closest to the people – taking positions on such issues.

US-based energy giant Kinder Morgan is proposing to ‘twin’ the existing Trans Mountain Pipeline, nearly tripling the capacity (from 300,000 to 850,000 barrels per day), and increasing oil tanker traffic to the point where almost one tanker per day (up to 360) will pass through busy Burrard Inlet, Stanley Park’s shores and the orca-inhabited Georgia Strait.  These tankers would transport additional crude, diluted bitumen and other types of oil from Alberta’s tar sands to Burrard Inlet, much of it for export overseas via tankers travelling through the Inlet and Georgia Strait.

The Kinder Morgan project has already encountered controversy. BC’s local governments called for a full environmental assessment at last year’s Union of BC Municipalities conference. The Save the Fraser Declaration, signed by over 100 First Nations in BC, Alberta and the Northwest Territories, says that the project is illegal under Indigenous law:

…in upholding our ancestral laws, Title, Rights and responsibilities, we declare:

We will not allow the proposed Enbridge Northern Gateway pipelines, or similar Tar Sands projects, to cross our lands, territories and watersheds, or the ocean migration routes of Fraser River salmon.

At the Vancouver Parks Board meeting on April 30th, the Board officially took the position that it is “strongly opposed to any expansion of the Trans Mountain Pipeline”(one Commissioner voted against the motion, but still stated her concern about an increase in tanker traffic). The Parks Board felt the motion, introduced by Commissioner Sharma, was consistent with its responsibility for 24 kilometers of waterfront along Burrard Inlet, English Bay and False Creek, which includes beaches and parks like Stanley Park, and its mandate to provide, preserve and advocate for parks for the benefit of all citizens of Vancouver.

Two days later at the City, Mayor Robertson’s motion was referred to the City’s Standing Committee on Planning, Transportation and Environment for public input.

Mayor Robertson spoke at length in support of his motion, including summarizing the risks to citizens and the local economy and environment:

This proposal is being put forward as being an economic initiative. Frankly, it presents nothing but risk to Vancouver’s economy and we need to stand up for our people, for our local economy, for the environment here and ensure all these questions are answered, that we have done everything we could to ensure we are representing the interests of the people here today and future generations and the environment we are responsible for stewarding.

The primary concerns underlying both Council’s and the Parks Board’s motions relate to the increased risks to the City’s land and marine environment, parks, and economy of the so-called ‘routine’ oil leakage as well as small and large oil spills in and around Burrard Inlet.

West Coast Environmental Law spoke to the Parks Board and the City’s Committee and highlighted the breadth of the short and long term costs of an oil spill. Staff lawyer Rachel Forbes explained that potential liability coverage under domestic and international law is:

woefully inadequate to deal with any of the social, environmental, economic and health costs that citizens and the environment are going to see not only immediately, but for decades to come.

Forbes also spoke about the importance of the City of Vancouver taking a stand on issues that affect our communities and our coast, saying, “It is increasingly important that those that are closest to the people bring our voices together, and bring them forward to the federal government.”

As we’ve explained in previous posts, if the federal government’s new environmental assessment legislation is passed, there will be far more limited opportunities for the public to be involved in environmental reviews of pipeline projects especially, and thus the voices of other elected governments will become even more valuable and more needed.

The importance of municipal voices

As a result of the City Council motion passing, City of Vancouver staff will research the options for a bylaw that requires Kinder Morgan’s pipelines and tankers project, and any similar projects, to have full liability insurance in place before proceeding.

In addition, Mayor Robertson will to write to Prime Minister Harper to express the City’s:

The City is also committed to working with other local governments, First Nations and the Metro Vancouver Port Cities Committee on further and ongoing responses to this important issue.

This is an important step for the City of Vancouver, and for Vancouverites who are concerned about a major increase in tanker traffic in the Burrard Inlet. We hope to see other local governments considering the impacts of such proposed projects on their communities and taking a position that reflects the interests of their constituents.

We are encouraged that local governments are making their views heard on pipelines and tankers issues – issues that affect their communities. Vancouver is the first to declare its opposition to the Kinder Morgan expansion in particular, but it joins other governments including Prince Rupert, Smithers, Terrace and the Skeena-Queen Charlotte Regional District who have declared themselves opposed to the Enbridge Pipeline and Tankers project and others such as the Resort Municipality of Whistler and several Vancouver Island communities who have taken a position against building new pipelines and increases in oil tanker traffic.

It is important that local governments make their views known, and represent their constituents on issues that have the potential to shape their regions for years and decades to come – risking the possibility of oil spills and environmental damage.