Tsleil-Waututh Nation: “Yes” to solar; “No” to Kinder Morgan 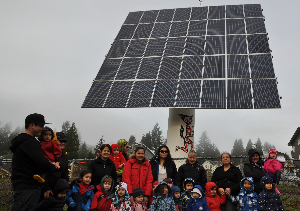 “We have installed this solar tracker outside of our daycare centre to remind our children daily that there are alternatives to oil…We are walking the talk.” - Carleen Thomas, Tsleil-Waututh Nation’s (TWN) Sacred Trust Initiative.

I was honoured to attend the Tsleil-Waututh Nation’s (TWN) launch and celebration of its new solar tracker last week next to the playground outside the community’s family and childcare centre, a short walk up the hill from the Kwel hoy’ Totem Pole. The solar tracker, comprised of 40 solar panels that rotate to track the sun, is expected to power 90% of the building’s energy needs for generations. But it is more than an alternative power source. It is a kinetic sculpture that also functions as a powerful counterpoint to the false notion that opposing Kinder Morgan’s pipeline is akin to opposing progress. In fact, the opposite is true.

Having a daily reminder that the green energy future is now is important, because TWN members are also reminded daily of the destructiveness of the oil industry. Since the original Trans Mountain pipeline was built in the 1950s (when it was illegal for Indigenous people to vote or hire a lawyer) to supply local refineries, the oil industry has had a dramatic impact on Burrard Inlet. TWN members have had daily reminders of the realities of the oil industry, as their community looks across the Burrard Inlet towards the Kinder Morgan terminal and the Chevron refinery, at the base of Burnaby Mountain (Burnaby Mountain itself now a reminder of the widespread opposition to Kinder Morgan’s proposed Trans Mountain Pipeline and Tanker expansion).

TWN has been a leader in the growing mountain of opposition to Kinder Morgan’s expansion. And for good reason. The expansion would triple the volume of diluted bitumen coming into their traditional territory; double the storage tanks on Burnaby Mountain; and increase in the number of tankers navigating Burrard Inlet’s two narrows by 700%, resulting in a dramatic increase in the risk of a catastrophic spill. TWN has been an outspoken critic of the Kinder Morgan project, and is challenging the constitutionality of the National Energy Board review process before the Federal Court of Appeal.

TWN members Leah George-Wilson and Gabriel George testified before the NEB in October that they could no longer enjoy traditional foods and cultural practices that their parents did, due to pollution in the inlet. They testified about TWN’s restoration efforts in the inlet, which are resulting in healthier and more abundant wildlife, but also about Kinder Morgan’s 2007 spill, which set some of those efforts back.

“If Kinder Morgan’s pipeline were to be approved, it would have a devastating impact on our people. We have considered the risks and have made a decision to oppose the expansion of this pipeline, based on our sacred obligation to protect our lands and waters.”

Far from NIMBYism, TWN along with other Kinder Morgan opponents have frequently made the link to impacts upstream in the tarsands, where the health impacts of extraction are being felt today, and to downstream impacts, where the refining and burning of the tar sands oil will contribute to climate change and send average global temperatures over the consensus target 2⁰C, as confirmed last week. Neither upstream nor downstream impacts will be considered by the NEB when it reviews the Kinder Morgan project, which is one of the many reasons it has been heavily criticized.

Plummeting oil prices: the free market isn’t free. TWN’s opposition to Kinder Morgan and promotion of clean energy alternatives demonstrates a vision and commitment that extends beyond short-term gains and quarterly balance sheets. Their opposition also recognizes the inherent volatility of the resource market and the contradictions of market fundamentalism. With the strong oil industry lobby, heavy government subsidies, and the cozy relationship between oil and politics, it’s clear that when it comes to oil, we were never operating in a free market. It is also clear, as demonstrated by recent plummeting oil prices following the release of reserves by OPEC, that the “free market” isn’t the guarantee of economic stability that it’s purported to be: the low prices are already impacting Tar Sands producers, and will inevitably impact governments or regulators whose budgets and forecasts assumed that oil prices would remain high. And while there will be impacts in the renewable energy sector, they will be nowhere near as drastic. Here’s why:

The reality of extraction economics is that returns will decrease because each new reserve is more expensive than the last to extract – and so the industry turns to more and more destructive and expensive technologies, as exemplified by the rise in unconventional extraction such as natural gas fracking, tar sands open pit mining, and in situ extraction.

In contrast, solar power economics are tied to the technology developed to capture that abundant source of energy. With technology, returns tend to increase over time as costs decrease. According to Stanford School of Business professor Tony Seba, “solar has improved its cost basis by 5,355 times relative to oil since 1970.” Seba, along with Google’s director of engineering, Ray Kurzweil, have predicted a massive solar energy transformation by 2030. Seba predicts:

“Petroleum will be made obsolete by information and communication technologies [“ICT”] just as film was made obsolete by ICT. Would a 30% or 40% cut in the price of film have prevented the disruption of the film camera industry? Not at all.”

And so, with the installation of TWN’s solar tracker, TWN signaled that the green energy future is now. Far more than just opposing a pipeline that threatens their culture and spirituality while facilitating the expansion of the tar sands leading to runaway climate change, TWN is demonstrating leadership by investing in alternatives and looking to the future. As Gabriel George testified before the NEB:

So when we stand -- we come here today, it's not just about the present. It's also about the past that goes back thousands of years. And it's about a future that's going to go a thousand more.

Indigenous Law
Climate and Energy
Green Communities
Back to top