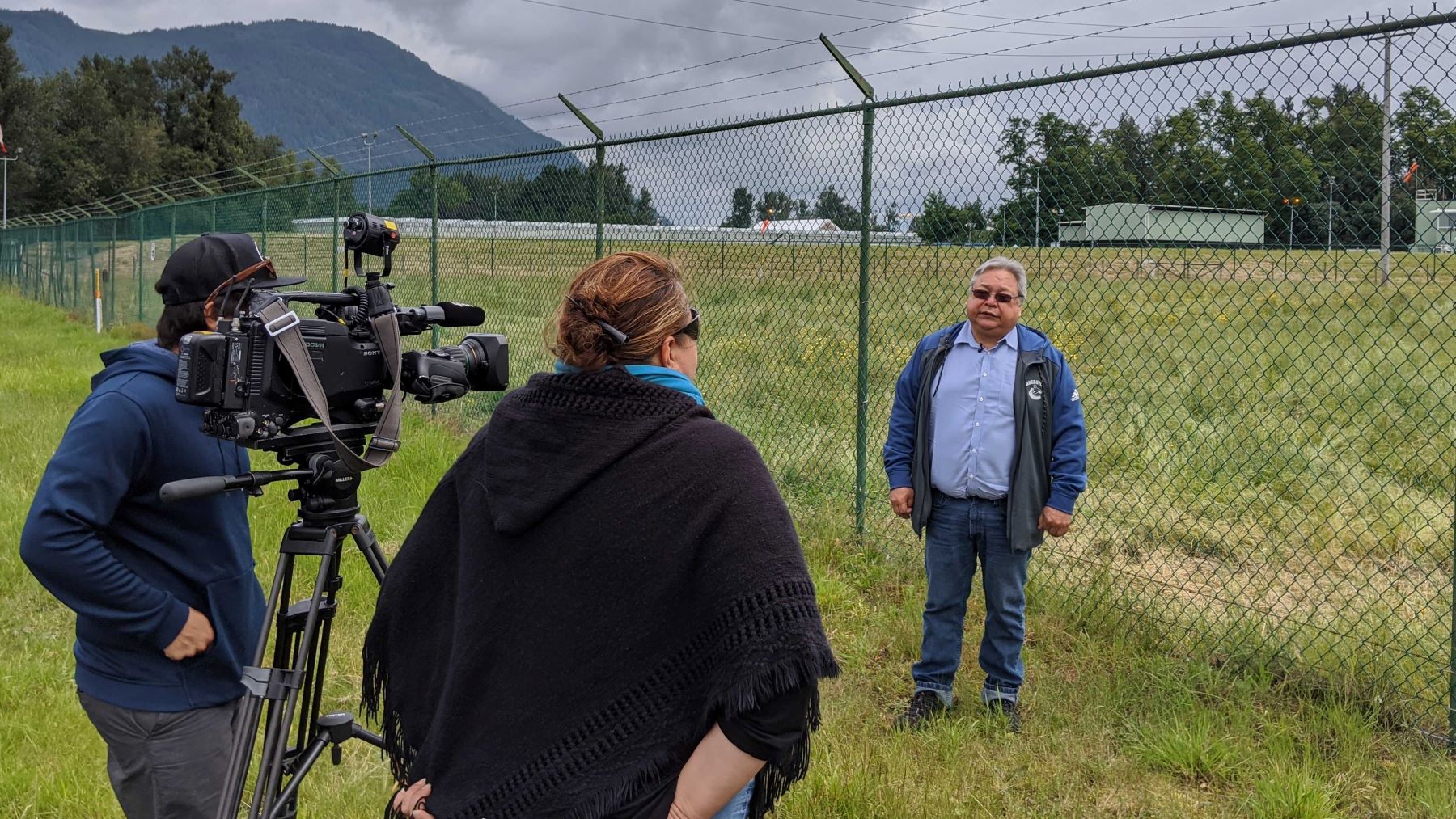 On Friday June 12, the Trans Mountain pipeline spilled an estimated 190,000 litres of oil at the Sumas Pump Station near Abbotsford, BC. This is the 85th oil spill from the nearly 70-year-old pipeline, confirming the fears of many that oil spills are inevitable.

The recent spill directly impacts the territory of the (Sema:th) Sumas First Nation, who have experienced four spills in the last 15 years. In particular, Sumas Chief Dalton Silver was outspoken about the impact of a spill on his community’s drinking water and sacred sites:

“Our main concern is for the cleanup of this spill and preventing further impacts to our territory. We need to have our monitors on the ground immediately. We need to understand what is going on from our point of view, how much oil spilled, what has been impacted, and what needs to be done to clean it up. We cannot continue to have our land desecrated by oil spills. This is the fourth time in 15 years that this pipeline has had a spill on our land."

In a recent CBC news story, prior to the most recent oil spill, Chief Silver discussed his Nation’s concerns about how the Trans Mountain Expansion Project will threaten Lightning Rock, a sacred and historic site to the Stó:lō people.

As previously reported by Maclean’s:

Lightning Rock has long been sacred to the Sumas people of B.C.’s Fraser Valley—a site where a shaman was thought to have transformed into a giant boulder before getting blasted into four pieces by a bolt from an avenging thunderbird. In the 1780s, perhaps as a show of deference, the Sumas interred victims of smallpox around the stone, creating a 12-hectare burial ground they’ve recently scrambled to preserve. Two years ago, they fought off a proposal for a massive business and residential development on the site. “Basically,” says Chief Dalton Silver, “we’re just trying to protect the place.”

The CBC story notes that Sumas First Nation has attempted to re-route the controversial pipeline to avoid this sacred site, and is now considering a “specific claim” – a legal claim against the Government of Canada intended to address past wrongs or fulfil historic obligations.

The $12.6 billion Trans Mountain Pipeline Expansion Project crosses 400 existing specific claims, according to research by the Union of BC Indian Chiefs.

Due to issues around confidentiality, there is not a lot of publicly available information about these 400 claims, but they present another source of potential legal liability for Canada related to the pipeline.

Since not everyone is familiar with specific claims, this blog provides a brief explainer on the topic, including how specific claims relate to the Trans Mountain pipeline.

In its landmark 1973 Calder decision, the Supreme Court of Canada recognized that First Nations’ historic occupation of lands gave rise to Aboriginal title. The decision was not a complete win for the Nisga’a Nation, which had brought the case, because the Court was split on whether Aboriginal title had been “extinguished” by the Crown, so the Court effectively did not resolve the issue. (In more recent years, the Supreme Court has clearly rejected the idea that Aboriginal title was extinguished, in cases like Delgamuukw and Tsilhqot’in).

At the time, the Calder decision sent shockwaves in Canada, and in particular in British Columbia, where the Crown had denied the existence of Aboriginal title for over a hundred years, generally failed to negotiate treaties, and legally prohibited First Nations from hiring a lawyer to pursue claims against the government until 1951.

In British Columbia, where very few historical treaties had been concluded, this was a significant development. In 1998, the Nisga’a Treaty was the first treaty signed under the comprehensive claims process in BC. Since then a small number of other First Nations in British Columbia have concluded treaties, while other nations have been critical of this process and chosen to assert their rights through other avenues, including the courts (for example, the Tsilhqot’in Nation).

However, the long overdue recognition of Aboriginal title and rights was not the only injustice confronting First Nations. Many Nations throughout Canada had entered into historical treaties with the Crown and found that Canada had failed to uphold promises it had made to them under these treaties. Other Nations had been moved onto reserve lands and these lands had been wrongly dispossessed by the Crown. These types of claims would be addressed through the specific claims process.

Approximately half of specific claims come from BC. Many of these claims arise from Canada’s management of reserve lands.

In part as a cost-saving measure, in British Columbia, the Crown created reserves that it forced First Nations to move onto instead of engaging in expensive treaty making. These reserves were often of poor quality, too small, and oppressively overseen by the federal government under the Indian Act. After they were first allotted, the Crown reduced the size of many of these reserve lands still further, or eliminated some reserves altogether, in order to make room for settlers and development. In particular, large transportation corridors were created with railways, highways, transmission lines and pipelines that carved up First Nations’ reserve lands.

To give an idea of the extent of the reductions in reserve size that occurred, in the 1860s Joseph Trutch, BC’s Commissioner of Lands and Works, reduced the reserve allotments that had been mapped out by his predecessor by 92 percent. This quote from Trutch pretty much sums up his work in this regard:

"The Indians have really no rights to the lands they claim, nor are they of any actual value or utility to them; and I cannot see why they should retain these lands to the prejudice of the general interests of the Colony, or be allowed to make a market of them either to Government or to individuals."

Trutch went on to become BC’s first Lieutenant-Governor when it joined confederation, and he has a street named in his honour in both Vancouver and Victoria. Today, Indian Reserves cover less than 0.4% of British Columbia’s land base.

Canada’s specific claims process is intended to offer a means of redressing these types of historical grievances and the lasting harm they have caused. First Nations can make claims related to Canada’s failure to provide lands or other assets under a treaty, or a breach of legal obligations by Canada in disposing of reserve lands.

A First Nation submits its claims to the Government of Canada, which then decides whether it is willing to negotiate compensation for the claim with the First Nation. Resolution of these claims can lead to much-needed sources of income for First Nations and provide a means of moving on from past injustices.

However, since the specific claims process was developed, two main concerns have been raised by First Nations. First, Canada has been notoriously slow to negotiate a resolution of these claims. Second, Canada had an inherent conflict of interest in that it was determining and negotiating its own wrongs.

These problems were especially concerning because if Canada delayed or refused to negotiate these claims, First Nations generally did not have the option to bring specific claims to court because of limitation periods. Limitation periods require that claims be commenced in court within a certain number of years from when the related actions occurred, so they generally prevent courts from hearing historical grievances. But remember that, as mentioned above, First Nations could not have taken many of these grievances to court when they occurred because the Indian Act prevented them from hiring a lawyer.

In 2008, in order to address these concerns, Canada created the Specific Claims Tribunal, an independent tribunal that could determine the validity of specific claims and award compensation to First Nations, to be paid by the Crown. The decisions of the Tribunal can be judicially reviewed by the Federal Court of Appeal.

However, First Nations’ concerns about delays and Canada’s conduct during the process remain. To give an example, in 1994 the Williams Lake Indian Band (WLIB) filed a specific claim related to its historical dispossession and displacement from one of its village sites that was to be a reserve (instead, this site is now the land on which much of the town of Williams Lake is located).

Canada refused to negotiate WLIB’s claim. In 2014, the Specific Claims Tribunal determined that WLIB’s specific claim was valid. However, that was not the end of the story. Canada sought a judicial review of the decision. After two levels of court, the validity of WLIB’s claim was finally upheld by the Supreme Court of Canada in 2018, twenty-four years after the claim had originally been filed.

Back to Trans Mountain

The Trans Mountain Pipeline crosses British Columbia from Mount Robson Park in the east to Burnaby in the west. Along this route it crosses the unceded lands of many different First Nations – and the Aboriginal title and rights of these First Nations is often the focus of stories about the pipeline.

Many of the lands and waters crossed by this pipeline were wrongfully taken from reserve lands, and are now subject to specific claims. As the CBC article suggests, some parts of the negotiations of these claims has been deemed non-essential during the COVID-19 pandemic and put on hold by the federal government. But these claims are not going away and more specific claims such as the Lightning Rock claim could be on the way if Trans Mountain Expansion (TMX) construction continues.

These claims represent another layer of legal risk and uncertainty facing Canada in respect of the beleaguered pipeline that could result in even more cost increases.

If the TMX is built before these claims are resolved, it will represent a significant setback to the legitimacy of the specific claims process and, by extension, reconciliation in Canada.

In this regard, the TMX pipeline is just like the railroads, highways and transmission lines of the past that gave rise to the specific claims process to begin with, running roughshod over Indigenous rights in the name of ‘progress’ and public interest.

The most recent oil spill is another sobering reminder that pipelines will leak and spill, no matter how many mitigation measures are in place.