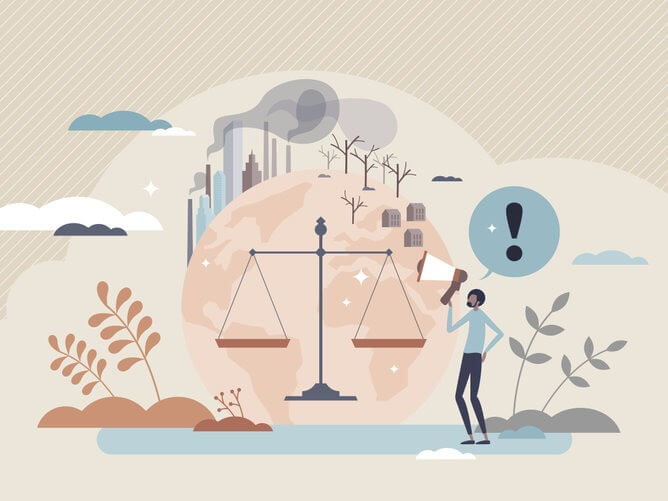 In 2021, British Columbia has been the poster child for what climate change looks like in Canada. This summer’s heat wave caused nearly 600 deaths, while recent catastrophic flooding resulted in at least four fatalities – in addition to devastating impacts on communities, infrastructure, wildlife and livestock.

There is growing recognition that we need governments to respond to the climate crisis with significantly more seriousness and urgency – looking at both what we are doing to cause it and how to protect vulnerable communities and ecosystems while ensuring that Indigenous nations have a leading role every step of the way. As Parliament gets to work after the fall election campaign, success will mean working climate justice into all aspects of public policy, not just the environmental file.

The effects of this year’s floods have been felt across B.C. and beyond – from local evacuation notices to country-wide supply chain disruptions. And the impacts of climate change have been disproportionately borne by those who have contributed to it least, including Indigenous communities.

At least 51 First Nations have been affected by the flooding. Their suffering is a direct result of colonial dispossession of their territories and forced resettlement to areas exposed to natural hazards, coupled with a systemic lack of access to emergency response and preparedness services.

These events should not have been a surprise to government officials, who have been warned for decades of the anticipated impacts of climate change caused by burning fossil fuels. And yet clearly the federal and B.C. governments were ill-prepared, and communities are suffering as a result. Canada has also missed every climate target it has set, adding fuel to the metaphorical fire.

West Coast Environmental Law was one of more than 100 signatories to a recent open letter by Lawyers for Climate Justice that urged the incoming government to apply a “climate justice lens” to all federal statutes and forthcoming bills to avoid making climate change worse and to protect vulnerable populations. The federal Liberals have pledged to adopt a “climate lens” to guide future decisions; however, we have seen these promises go undelivered in the past.

Narrowly focusing on climate change is not enough; the impacts of climate change on social and economic inequality must be considered. If applied correctly, a climate lens can align strategies across government agencies to tackle both climate change mitigation (reducing greenhouse gas emissions) and adaptation (increasing resiliency and reducing negative climate impacts).

To date, Canada’s approach to addressing the climate crisis has been piecemeal and ineffective. The recent enactment of the Canadian Net Zero Emissions Accountability Act (which enshrined a net-zero goal by 2050 into law) is a helpful first step, but a government-wide climate lens could help ensure that all departments are acting consistently, with a common goal and measurable interim milestones.

This isn’t the first time the government has attempted to apply an environmental lens to a range of different policies. A 2010 cabinet directive, under former prime minister Stephen Harper, required all federal agencies and departments to conduct a strategic environmental assessment of major “policy, plan or program proposals” that might “have important environmental impacts.” However, it did not contain specific objectives and left each department to develop its own policies implementing the directive – an approach that resulted in scathing reports by Canada’s auditor general.

Despite this overarching requirement to examine the environmental impacts of government programs that’s been in place for more than a decade – as well as a host of well-intentioned climate policies – Canada has not reduced its emissions, nor built government programs focused on climate resilience. In fact, the government bought an oil pipeline and Canada’s greenhouse gas emissions actually rose 3.3% from 2016 to 2019 (and 20% since 1990).

Nor are new laws being designed with climate change and its impacts on human rights as a key consideration. For example, while the new Impact Assessment Act requires the government to include climate change in assessments of huge infrastructure projects, many projects with massive climate impacts are still left out, such as in situ oil sands and cement projects.

With both advocates and the government calling for a climate lens, it’s important that we get this right. Our climate lens must protect those who disproportionately experience climate impacts and must prioritize human rights, including Indigenous self-determination. Nothing less than a legislated climate justice lens is required.

Coupled with the federal United Nations Declaration on the Rights of Indigenous Peoples (UNDRIP) Act, passed earlier this year, seeking to ensure that all federal laws are aligned with UNDRIP, a climate justice lens must ensure that all existing and future legislation and government decisions consider not only climate change mitigation and adaptation, but also the unequal way climate impacts are distributed in society.

In practice, a climate justice lens could involve the government reviewing the Income Tax Act to eliminate fossil fuel subsidies and, instead, prioritize subsidies that promote climate adaptation and a rapid energy transition – while considering how to ensure that marginalized communities have prioritized access to these subsidies. Or when making decisions about immigration, applying this lens could mean reducing barriers faced by those driven from their home countries by rising sea levels and other climate impacts.

The lens cannot simply be a “check box” exercise; to be effective, it must be legislated and have substantive requirements that guide government agencies to fully understand the risks associated with climate change and to prioritize action to reduce and manage those risks. It also must involve deep and meaningful consultation with Indigenous nations.

The compounding climate-related crises in B.C. remind us that real legislative and policy action cannot come soon enough. Climate impacts and the energy transition now implicate every area of federal jurisdiction, with uneven effects on different populations. As a high-income economy – and the 10th largest emitting country globally, despite its small size – Canada’s mitigation efforts can have effects well beyond its own emissions reductions; they can show global leadership and innovation. And spending to prepare for climate impacts is no longer optional; the costs of waiting far exceed those spent to prepare.

Our existing climate tools are not working, and the crisis requires the government to act as a unified whole. A climate justice lens should force the government to take a good, hard look at existing legislation and future decisions in relation to both climate change mitigation and adaptation, as well as its human rights impacts – something that is crucial now and for the years to come.