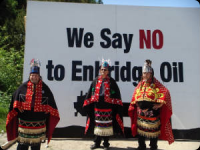 Fresh out of bed the first morning after the election, Stephen Harper met with the press and said:

"There were a lot of policies being floated by the other parties -whether it's on West Coast transportation or the energy sector -that simply did not reflect the needs and concerns of this part of the country. Some specific policies seemed to be also targeted to do damage in Western Canada. So, I think it's a great thing that those policies will not be coming to fruition. "

Kind of discouraging that this was on the top of his mind when asked about Western Canada in his first press conference since winning the election. Surely, Harper must be referring to - among other "policies" - the quest for a legislated tanker ban on the north coast – notwithstanding that a new law to protect the north coast from oil spills definitely reflects the needs and concerns of people in BC and across Canada.

Well, he’s right in that the legislative tanker ban that has been proposed – and towards which West Coast and its allies like Dogwood Initiative, ForestEthics and Living Oceans Society have been tirelessly (and proudly) working for several years – is not going to happen anytime soon; with a Conservative majority in the House of Commons and the Senate, that is for sure. Our campaign for a tanker ban has made great progress – a motion passing in the House of Commons with a majority of Canada’s elected representatives supporting a ban; the tanker ban Bill C-606 that would’ve started debate if there hadn’t been an election; and platform commitments in black and white from parties coloured orange, red, and green (with back-up support committed from the now much-diminished turquoise of the Bloc). We got close to passing the ban in the House of Commons! But for now, legislation to protect the coast is unlikely.

However, there’s no reason for British Columbians to lose hope, or to think that an oil-soaked coast is guaranteed, instead of one that remains oil-free. That is because the people living in BC are going to ensure that this threat never comes into reality – and we can’t forget that consistently, more than 75% of British Columbians polled make it clear in that they do not want oil tankers on the north coast.

What’s more is that oil tankers on the north coast are already against the Indigenous laws of the Nations who live there. The Coastal First Nations have declared, using their laws, that oil supertankers are not permitted in their waters between Haida Gwaii and the north coast. The Nations of the Fraser watershed have made a decision, in the Save the Fraser Declaration, that:

In upholding our ancestral laws, Title, Rights and responsibilities, we declare: We will not allow the proposed Enbridge Northern Gateway Pipelines, or similar Tar Sands projects, to cross our lands, territories and watersheds, or the ocean migration routes of Fraser River salmon. We are adamant and resolved in this declaration, made according to our Indigenous laws and authority… [W]e will protect our watersheds, and we will not tolerate this great threat to us all and to all future generations.

These declarations are made using the laws and decision-making authority of each First Nation, embedded in their distinct governance structures and millennia-old systems. Indigenous laws continue to exist and to operate on the land, and they have never gone away, despite Canada coming into existence. The right of First Nations to make decisions about their own lands and waters – and the obligation of governments to respect them – are recognized in international law. In Canadian law, these declarations are an exercise of the constitutionally-protected Aboriginal Title over the lands and waters of their territories. The decisions made by the Coastal First Nations, and the Nations of the Fraser watershed such as those in the Yinka Dene Alliance, mean that any project to bring crude oil through the north of BC will be highly vulnerable to enforcement action grounded in each First Nation’s laws. They also make it highly likely, among other reasons, that any decision taken by the Canadian government to approve oil pipelines and tankers will face serious legal challenges in the courts. It is doubtful that Enbridge, its investors and its financiers will be able to avoid facing these risks.