Take Action: Say no to pipelines in our parks! | West Coast Environmental Law

News & Events » Environmental Law Alert Blog » Take Action: Say no to pipelines in our parks!
Back to top

Take Action: Say no to pipelines in our parks! 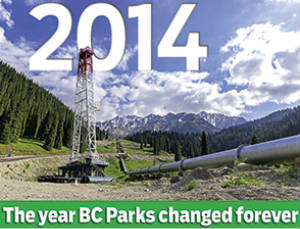 We’ve just learned that Kinder Morgan has received an illegal park use permit from the BC government to allow it to research pipeline routes through 5 of BC’s parks and protected areas. And rather than recognizing that parks should be off-limits to pipelines, the BC government has rushed through an amendment to the Park Act to authorize this type of permit in the future.

On March 24th, the BC government amended our Parks Act and weakened protection by allowing industrial “research” – including research into the feasibility of pipelines - where it was once banned. Now we’ve learned that pipeline giant Kinder Morgan was granted a “research” permit back in November 2013, when they were likely illegal. Environment Minster Mary Polak admitted as much in Question Period last month.

Click here to send a letter to your Minister Polak, Premier Christy Clark, and your MLA.

Keep Kinder Morgan’s Pipeline out of our Parks

In some cases the new pipelines will be alongside the existing Kinder Morgan oil pipeline (but with the path through the parks widened), but in other cases entirely new pipeline routes are being considered.

Researchers hired by Trans Mountain are already at work taking soil samples, electro-shocking fish, and carrying out other activities aimed at evaluating the feasibility of building the pipelines through BC parks, with the eventual aim of having these lands taken out of the parks.

Recently, however, the BC government was advised that industrial park use permits of this type were likely illegal under BC’s Park Act . So with no public consultation it rushed through Bill 4, the Parks Amendment Act.  In the Legislature, the Minister admitted:

The reason we brought forward the amendment — and I would say one of the reasons that the consultation has not been aggressive or thorough on this — is that we are seeking to ensure that we have the statutory authority for things that up until now we took for granted that we did.  … We've been advised that the granting of the permits as we have done likely would not stand the test of a [court] review, and therefore, we need to amend the Park Act to ensure that we can continue on with what we have been doing but with the statutory authority so that we would not be in a case where either the granting of or the denial of the application for a permit could be successfully challenged and overturned based on our lack of authority. [Emphasis added]

The government suggested that the amendments were mostly for the film industry or low impact academic research. But considering Kinder Morgan’s illegal permit, it seems clear which industries are really benefitting.

Let’s tell Minister Polak, Premier Christy Clark, and your MLA to stand up for our parks, revoke the illegal Kinder Morgan permit, and stop changing BC’s laws to help out industry.