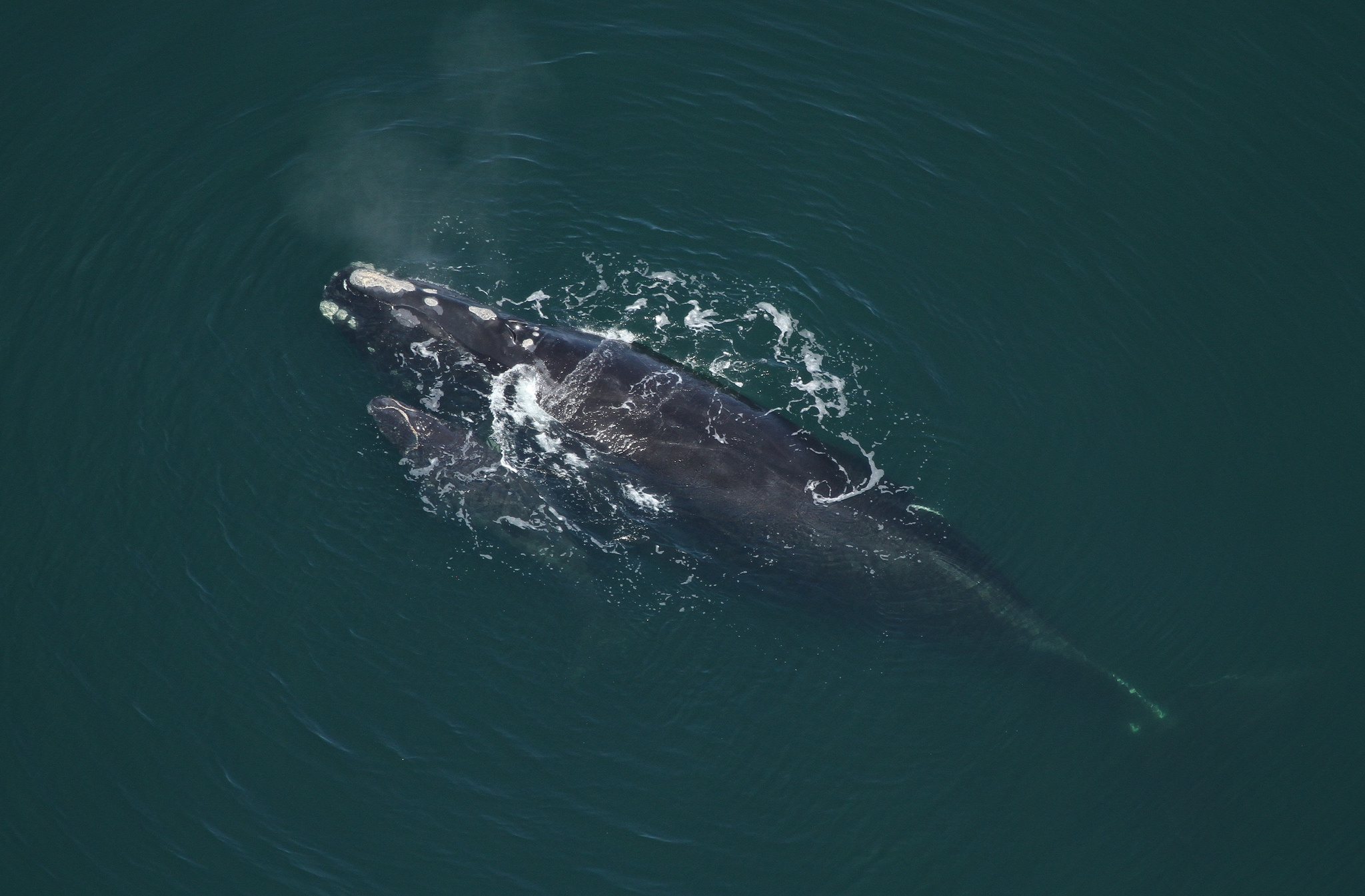 Last century, law turned the tide on many plummeting whale populations through a ban on most commercial whaling. With the unexplained deaths of a dozen highly endangered North Atlantic right whales in recent months (and the death of a young killer whale on the west coast just this week), it’s time again to use our laws to put whales on the road to recovery.

Creating marine protected areas (MPAs) with strong protection measures is one of the most effective ways to do just that. Fortunately, this fall Parliamentarians can increase these whales’ chances of survival by strengthening protection standards for MPAs in the Oceans Act amendment bill. Two other complementary legal solutions are also readily at hand: passing the long overdue revised Marine Mammal Regulations, and strengthening the Species at Risk Act.

Reducing the danger is no easy task. That’s where law comes in.

Though the ocean is governed by a complex set of international, Indigenous, federal, and provincial rules, three federal laws in particular stand out to increase whales’ chances of survival. Each needs action to bring it into force, or make it more effective. The first of these three laws is the Oceans Act – our flagship ocean protection law.

The Oceans Act is currently subject to proposed amendments before the House of Commons in Bill C-55, which means we have an important opportunity to step up legal protections for whales and other marine species.

The proposed amendments to the Oceans Act in Bill C-55 allow for the creation of a new type of MPA, interim marine protection areas, and create new powers to freeze the footprint of existing activities while MPAs go through the consultation and designation process. An amended Oceans Act will apply the precautionary principle, and use strengthened enforcement provisions. The Bill also proposes amendments to just one (among several) offshore oil and gas laws to allow for cancellation or suspension of oil and gas interests in MPAs, leaving a patchy legal framework in place across Canada on this vital issue. These proposed amendments are a good start, but they can and should go further. The Bill’s marine protected area (MPA) provisions need reinforcement if these areas are to provide true refuges for whales.

MPAs are special places in the sea where human activity is limited so marine life can thrive. As Professor Cameron Jeffries says, when used appropriately and managed through legally enforceable measures, MPAs can help ensure that species have access to the type and quality of habitat necessary for survival. Finishing management plans and regulations for proposed MPAs for whales, and creating new MPAs that coincide with critical whale habitat, are priority actions for whale protection and recovery identified by both scientists and the government.

But to provide meaningful protection for whales, this flagship law must be more robust. Keeping threatening human activities away from sensitive habitats and species is a prime function of MPAs, yet currently no activities are automatically prohibited when an MPA is created under the Oceans Act. In other words, business in the sea can continue as usual, until a site-specific set of regulations is enacted. Lengthy negotiations over what is and isn’t allowed within an MPA’s boundaries often result in an MPA that is smaller and less protected than initially planned. And damaging activities may not be entirely excluded.

For example, most people are shocked to learn that oil and gas drilling and seismic exploration can carry on in an MPA. The recent nomination of Laurentian Channel as an MPA under the Oceans Act is a case in point. Rodolphe Devillers, an ocean scientist and professor at Memorial University, shows in this summary of a soon-to-be-published study that over the course of the MPA development process, the size of the MPA was whittled down and the area open to oil and gas drilling was substantially increased, with the final result that 88% of the MPA is left open to oil and gas drilling. No one expects oil drilling in a national park on land, so why should we treat our oceans so differently?

In other MPAs, different damaging activities are allowed, like shipping and industrial fishing. These are activities that Fisheries and Oceans Canada (DFO) scientists say should be limited for the three endangered whale species to survive.

The expert review for southern resident killer whales states that the population continues to decline and that “thus far no recovery measures have been implemented that directly aim to reduce shipping noise or improve prey availability” – two known threats.

The expert review for the St. Lawrence Estuary beluga states that the population is declining and recovery measures to date haven’t reversed the decline. The review says the three top threats (contamination, noise disturbance, and shortage of food supplies) must all be addressed, and for shipping, “the most effective way to reduce threats from noise and disturbance is to increase the distance separating ships, ferries and small crafts from the beluga or their important habitats.”

Comprehensive MPA rules and management plans can address these and other threats to whales. The risk of entanglement with fishing gear – a prime suspect in the disturbing deaths of so many North Atlantic right whales this summer – can be reduced by halting fishing activities altogether in critical habitat, which would also reduce threats from shipping noise and disturbance. MPA regulations can also establish no-go zones for ships in critical areas or at critical times, and can set speed limits because slower ships pose less risk of strikes.

Bill C-55 needs to outright prohibit the most damaging activities from occurring in an MPA. Putting this prohibition in place in an amended Oceans Act, so that MPA designation automatically takes certain damaging activities off the table, would accomplish a number of tasks.

First, it would speed up the slow pace of MPA designation, where often a decade or more elapses before the process is complete. Lengthy negotiations over what activities will be prohibited or restricted within an MPA are a prime reason for this delay.

Second, it would create certainty for ocean users. The rules would be clear from the start. Even with Fisheries Minister Dominic LeBlanc committing to protect 5% of Canada’s ocean space by 2017 and 10% by 2020, in the vast majority of the ocean, business continues as usual. Strong and predictable prohibitions should exist for the fraction of the sea that is protected.

Finally, and most importantly, putting minimum protection standards in the Oceans Act will help save the whales. We don’t need to reinvent the wheel – the companion federal law on national marine conservation areas already automatically prohibits seismic testing, oil and gas activities, and undersea mining in areas such as the recently announced Lancaster Sound marine conservation area.

The calls for change are mounting. The House of Commons Standing Committee on Environment and Sustainable Development, in a recent unanimous report, called on the government to “confirm minimum conservation standards of protection for each category of federal protected area to meet accepted international standards” and to “enshrine the restoration and maintenance of ecological integrity as the overriding priority for Canada’s marine conservation areas in parallel with the Canada National Parks Act.” Many experts at our Oceans20 workshop this summer repeated this call. Our brief on minimum protection standards is a guide to this issue.

Two other federal whale protection laws need attention. The Species at Risk Act was designed to stop species from going extinct and help them recover. Through a graduated process of identifying critical habitat, developing recovery strategies and action plans and implementing Critical Habitat Orders, this law sets out the steps that must be taken to reverse species decline.

In the case of the three critically at-risk whale species, Critical Habitat Orders have been prepared and are legally in force for two out of the three species (the St. Lawrence Estuary beluga is the exception). But these Orders are not sufficient.

As the expert review for the SRKW states: “Critical Habitat identification alone does not necessarily result in direct reductions of threats. In order for threats to be reduced, Critical Habitat requirements need to be adequately enforced.” And the Species at Risk Act’s prohibition on destroying critical habitat is hard to implement. As noted by whale scientist Rob Williams of Oceans Initiative: “When does habitat disturbance to whales, whether from excessive boat noise or lack of salmon to eat, cross the line into habitat destruction?”

Another critical legal tool, the Marine Mammal Regulations under Canada’s Fisheries Act, are long overdue for revision. An updated version of the Regulations, prepared over a decade of consultations, has been languishing in limbo for years. Swiftly enacting the new version of these regulations will add another layer of life support for whales and other marine mammals, by putting stronger prohibitions in place against causing disturbance to marine mammals, and by setting approach distances for whale watching boats so we don’t love them to death. The action item on this issue couldn’t be clearer: the federal government should simply enact the regulations it has already prepared.

Law to the rescue!

Canada was once a world leader in ocean law, passing an Act to protect Arctic waters in  the 1970s, playing a prominent role in the negotiation of the Law of the Sea treaty, and passing the Oceans Act, the world’s first ecosystem-based ocean law. But that leadership has stalled in the twenty years since the Act was passed, and our whales are suffering.