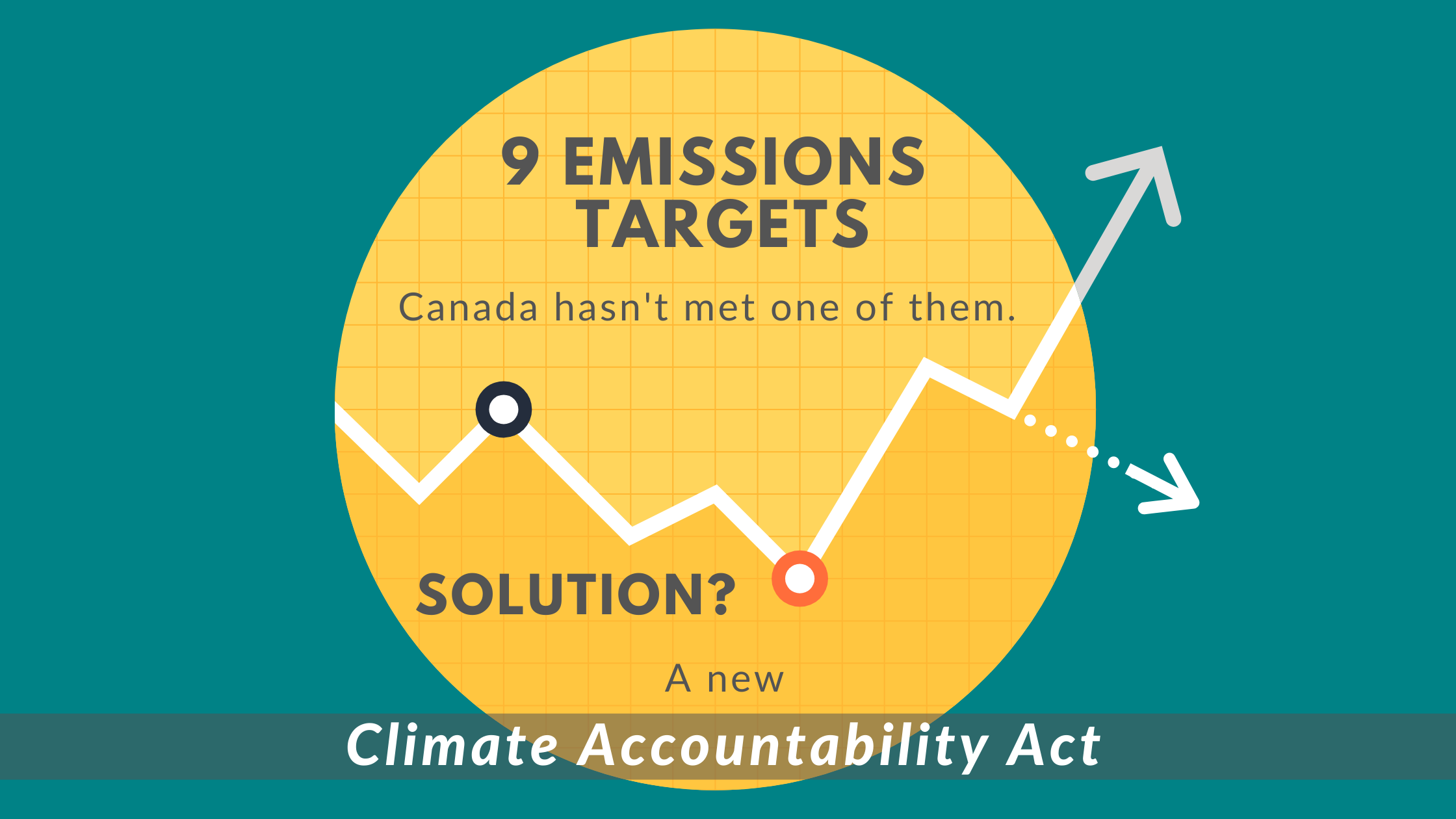 With this year’s somewhat unusual school year over, I’ve picked up my kids’ report cards. Some good marks, some areas for work, but at least I know that they’ve done better in their courses than the Canadian government has done in achieving its climate targets over the past three decades.

Canada has set nine greenhouse gas (GHG) reduction targets for itself since it signed the 1992 United Nations Framework Convention on Climate Change. It’s already missed five of them, will miss two more set for 2020 and does not know how it will achieve its 2030 and 2050 targets.

The report proposes 5 pillars for this new statute:

Pillar 1: Long-term (2050 & 2030) GHG reduction targets that are ambitious and move Canada towards its fair contribution to a 1.5 °C mitigation scenario.

Pillar 3: Five-year impact reports tabled before Parliament that assess the risks of current and predicted climate impacts in Canada.

There are several reasons to believe that a climate accountability law, while not a silver bullet, will at least help to get Canada back on track and meeting its climate targets.

First of all, we’ve seen in recent months how science-based decision-making and a clear goal can get whole provinces and countries changing how they operate, and working to manage a crisis. Public health experts like Doctors Bonnie Henry (in BC) and Theresa Tam (federally) have briefed us regularly on the latest trends and science of the pandemic, our governments’ plans and goals for dealing with the crisis, and on our collective progress. The 5 pillars – like our pandemic response – put scientific experts, clear objectives, planning and regular reporting at the centre of government action.

Second, this type of legislation has worked elsewhere. Our recommendations are based in part on the ground-breaking UK Climate Change Act 2008, which has played a key role in reducing that country’s greenhouse gases to levels not seen in over a century. Other countries have also adopted this approach, with great effect.

I first explored what legislation of this type might look like in Canada in our 2015 report, A Carbon Budget for Canada. Despite our best efforts, and positive commitments from then-Environment Minister Catherine McKenna, the Canadian government did not include a rigorous framework for accountability in its Pan-Canadian Framework on Clean Growth and Climate Change.

Since then, there has been a growing chorus of calls for a Canadian Climate Accountability Act. Pressure from a range of organizations led to most parties in the last federal election at least touching on greater climate accountability in their election platforms.

In addition to our new report, the new Canadian Institute for Climate Choices (CICC), a think-tank funded by the federal government to provide climate advice, is also calling for a climate accountability act in their new report, Marking the Way: How Legislated Climate Milestones Clarifies Pathways to Long-Term Goals. Journalist Barry Saxifrage also independently made the case for a climate accountability law, even before these recent reports were released.

If you’re ready to join these voices, click here to send a message to Prime Minister Trudeau.

Provincial fair shares and how to deal with them

There are minor differences between our recommendations and those of the CICC. These primarily relate to how a climate accountability law should work in a confederation (where the federal government shares authority with provincial governments). This is especially challenging in Canada, a confederation where, as Barry Saxifrage points out, two provinces (Alberta and Saskatchewan) now emit almost 50% of Canada’s greenhouse gas emissions.

We feel that we can no longer avoid the messy conversations about the need to regulate greenhouse gas emissions in all regions of the country. We need to discuss how a climate action plan can include, and be fair to, Alberta and Saskatchewan – but that requires a science-based, transparent conversation. All of the regional/provincial budgets must fit within the national carbon budget.

CICC, on the other hand, is (understandably) sensitive to the political challenges of telling some provinces that they are emitting too much. While they would allow the government to provide information about emissions from each province, and how those relate to achieving the national target, they reject the idea of the federal government making any determination about fair shares or a regional pathway to achieving climate goals.

It is important, however, to emphasize just how much agreement there is between the CICC and our report. About 90% of our recommendations are very similar, and even in this politically contentious area there is less difference than one might think.

To ensure that overall climate policy in Canada is and remains sufficient to reach national milestones, the federal government should use federal policy “backstops.” This could include, for example, increases in the federal benchmark carbon price, increases to the stringency of the planned Clean Fuel Standard, or new policies altogether. Where possible, provinces and territories should have the opportunity to seek equivalency if they have policies that achieve equivalent outcomes. (p. 35)

Where we disagree seems to be on when and how hard choices should be made. Does Canada need a formal, science-based, transparent process to set binding sub-national carbon budgets that collectively achieve the national carbon budget? Or, instead, should evaluation of provincial fair shares occur (with the benefit of scientific information) in on-going decisions by the federal government on how to achieve the binding national budget and whether and when to step in and impose backstops on provinces that aren’t doing their fair share?

Which approach do you prefer? Or do you have another suggestion about how to meet the national carbon budget while ensuring that each province is engaged and doing its part? Feel free to let us know in the comments section below.

The Canadian government needs to hear loud and clear: we expect Canada to achieve its climate targets, and that means putting in place accountability rules to keep all future governments on task and honest about doing our share as a country to reduce greenhouse gas emissions. It doesn’t make sense to have a legal framework that says taking the necessary action on climate change is optional, when clearly it isn’t.

Take a moment to tell Prime Minister Trudeau, Environment and Climate Change Minister Jonathan Wilkinson and your MP that you are expecting a strong Climate Accountability Act based upon the 5 pillars recommended by West Coast Environmental Law and other environmental organizations.

Note: We could have given you a form letter so that you could simply enter your email address and click send. We’ll let you in on a secret – governments pay much more attention to personal letters than form letters. So please take a moment to write your own letter, even if it’s just to endorse the 5 pillars and the idea of a Climate Accountability Act.

[Update: This letter-writing tool has been archived. Thank you to all those who took action!]