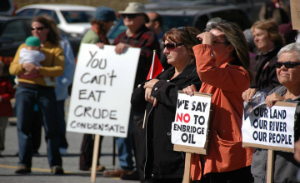 The term “social licence to operate” (SLO) is used frequently by project proponents and in the media.  What does it mean and why is it important?  The phrase was originally coined by the mining industry about 15 years ago to describe the business case for company engagement with the local community and other stakeholders.  Today the term is routinely used by a variety of natural resource industries.

As Forbes Magazine contributor Paul Klein states “Over the last few years, SLO has become an imperative for corporations in the resource extraction sector that require support from local communities to secure financing and government approvals for their projects.”  SLO is in effect a recognition that that the views and aspirations of stakeholders that are or may be impacted by a project (such as local communities and non-governmental organizations) can make a critical difference in whether a project proceeds or not. The concept of SLO is sometimes used to encompass the international legal standard of “free prior and informed consent” with respect to operations on First Nations’ land.

In spite of growing recognition of the benefits of SLO from industry proponents and government, the term is not without controversy.

For example, Brian Lee Crowley, of the Ottawa-based think tank MacDonald Laurier Institute, has vocally challenged the legitimacy of the concept.  In a recent Globe and Mail piece he writes that SLO is either “meaningless or a polite term for mob rule.”  The crux of his argument is that because there is no formal process for proponents to apply for SLO, the requirement is vulnerable to abuse by project opponents:

The very vagueness of the term social licence means we cannot know what the rules are, when you’re in compliance or when you’ve still got work to do.  And project opponents like that vagueness just fine because it gives them unilateral authority to claim that the need for social licence has not been met.

Crowley purports that instead of being required to seek SLO, proponents should be able to rely purely on the “numerous institutions that ... are given specific authority to examine impartially the issues that are raised according to known rules, outfits like the National Energy Board (NEB) or various environmental assessment agencies.”

There are a number of problems with Crowley’s arguments. First of all, he seems to be conflating a democratic ideal with a legal requirement.

In spite of the important relationship between SLO and legal licence to operate, the two are not the same thing.  A legal licence is a narrower concept than that of social licence.

As the industry-friendly Fraser Institute explains, in order to obtain SLO companies must develop good relationships with all stakeholders and should engage with communities in discussions of the risks, costs and benefits of projects “on the basis of respect, inclusion, and meaningful participation.”  In order to maintain SLO, companies must:

… keep their promises and commitments, respond to the community’s concerns and requests, ensure that information is not only delivered but also understood by all stakeholders, be accountable to the communities at all stages of the project cycle, and not engage in dishonest or irresponsible behaviour.

Obtaining SLO reduces a company’s risk of incurring public criticism, being drawn into social conflict, and sustaining reputational damage.  When SLO is entered into with integrity, it can enhance the democratic process by strengthening people’s ability to meaningfully shape and participate in the development of their communities.

A second problem with Crowley’s argument is that he assumes the existence of robust environmental laws trusted by the public.  Unfortunately this is not the case. Indeed, it might be suggested that recent and poorly conceived changes to environmental laws, and a failure of the law to keep up with what the public expects, contributes to the loss of social licence.

Recent changes to federal environmental law have shut citizens out of environmental decision making in various ways.  For example, the environmental assessment process is a key way to allow citizens to have a say in whether projects are allowed to move forward, where they should be located, and which conditions should be attached to approvals to minimize adverse environmental effects.

Crowley specifically cites the National Energy Board (NEB) as the kind of institution that should be exclusively relied on for “impartial” decision-making around project development.  Under CEAA 2012, energy-related assessments are put under the jurisdiction of the NEB, an agency whose mandate includes, as a major feature, promoting the energy industry and which lacks specialized environmental assessment experience.  The NEB also limits public participation in environmental assessment of pipeline projects to individuals who can demonstrate that they are either “directly affected” by the project or have particular expertise or information that, in the opinion of the NEB, is relevant.

As we’ve written previously, this test, taken narrowly, has the potential to exclude a lot of people who live near or are otherwise indirectly affected by pipeline projects.  The NEB in its reviews of both the Enbridge Northern Gateway and the Kinder Morgan Trans Mountain Pipeline Expansion proposals has also excluded consideration of climate change, arguably the most significant environmental issue of our time, which further undermines the perception of legitimacy of its environmental assessment.

When you remove systems within the law that allow people to have input into decisions that affect them, they are out of necessity likely to turn to strategies outside the law instead.  The importance of SLO is growing in a context where people are increasingly losing faith in the regulatory process.  Recent polling shows that only three in ten British Columbians trust Ottawa’s pipeline approval process to render decisions that are actually in the public interest.

Interestingly, recognizing public distrust of the regulatory process, some companies are choosing to distance themselves from the government and focus on SLO.  In Quebec, TransCanada executives promoting  the Energy East pipeline reportedly told key ministers to “back off” from public engagement on the project and let the company handle it themselves.  While social licence might seem like an intangible concept, it is nonetheless an increasingly essential one for many companies.

In a context where Canada’s environmental laws are being aggressively weakened in favour of big resource companies, and where many Canadians are feeling alienated and excluded from formal environmental decision-making, SLO is rapidly gaining in importance.

Brian Crowley could serve Canadians better by advocating for stronger environmental laws – which better reflect the expectations of Canadians – than by confusing an ideal that resource companies should strive to achieve with legal requirements.