Sharing is the law here: Co-learning on ƛaʔuukʷiʔatḥ (Tla-o-qui-aht) Territory 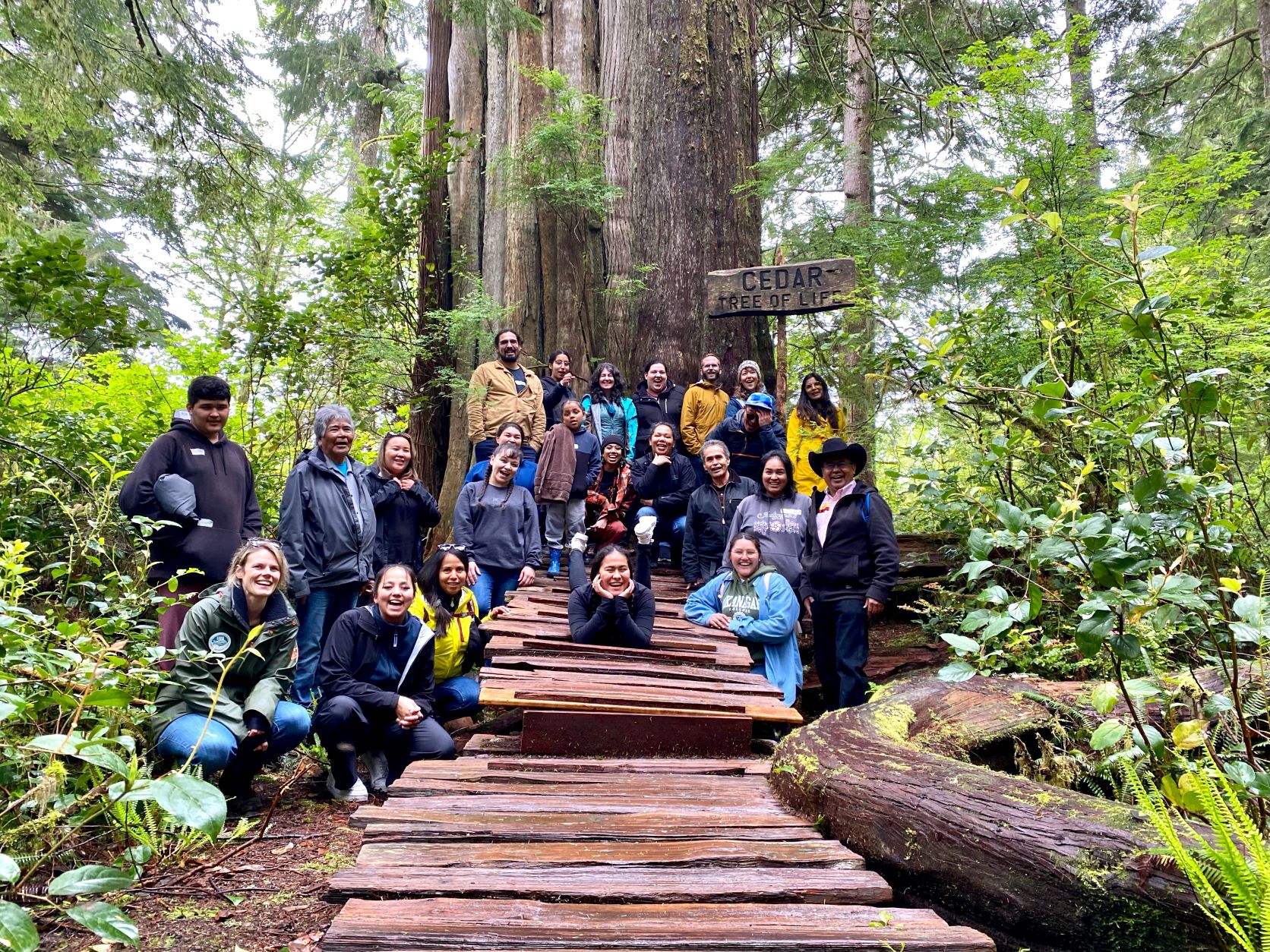 Standing under the towering presence of a 600+ year old being, a hushed awe permeates the group. As we silently recognize the magnificence of this life form, I suspect I am not the only one who longs to hear the stories this tree carries.

The trees of this place are still standing today because of the implementation of nuučaan̓uuɫɁatḥ (Nuu-chah-nulth) laws by those who have governed this place for millennia. More than 40 years ago, the ƛaʔuukʷiʔatḥ (Tla-o-qui-aht) and Ahousaht, two nuučaan̓uuɫɁatḥ (Nuu-chah-nulth) nations began organizing support to protect Wanačis ḥiłhuuɁis (named Meares Island by an English colonial official), declaring Wanačis ḥiłhuuɁis as a tribal park. This work culminated with the Clayoquot Sound land defence movement and successfully prevented logging of the island’s old growth forest, a vital source of water for the neighbouring town of Tofino, BC. 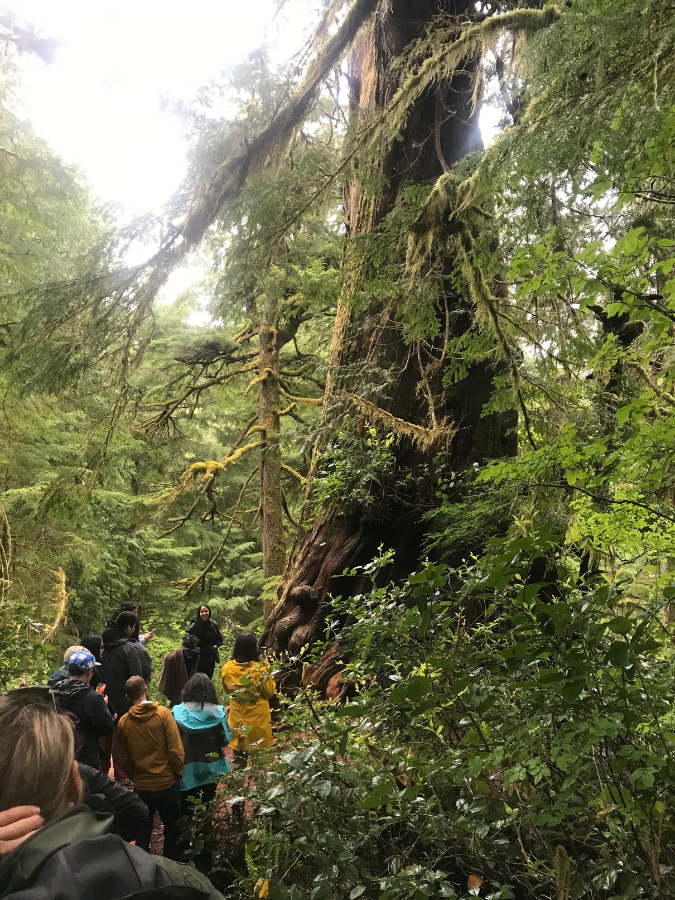 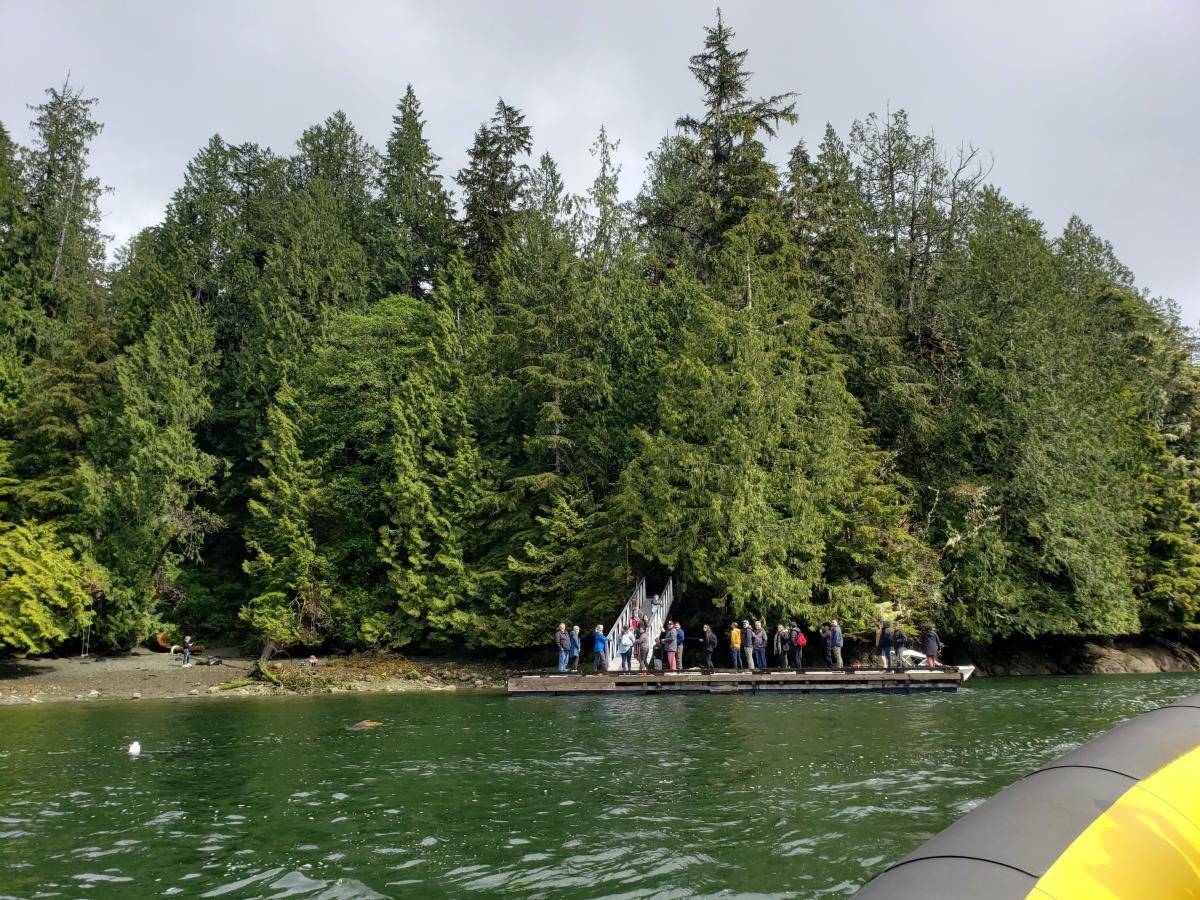 At RELAW, we work directly with Indigenous nations on articulating and applying their laws to address issues that they face in defending and governing their territories. Every year, RELAW hosts a three-part retreat series focused on co-learning with Indigenous participants as well as non-Indigenous co-learners who work closely with an Indigenous organization.

This retreat focused on implementation and enforcement of Indigenous laws, and was hosted near Načiks (today the site of the settler town Tofino) at the Naa’Waya’Sum gardens and IISAAK Learning Lodge, a space that was transformed from the Tofino Botanical gardens to an Innovation Centre for Indigenous Protected and Conserved Areas. RELAW partners and representatives from other First Nations participated in the retreat, including Kaska Dene, Tŝilhqot'in, səl̓ilwətaʔɬ (Tsleil-Waututh), sməlqmix /syilx, Ahousaht, and the Lower Fraser Fisheries Alliance (an alliance of approximately 30 nations in the lower Fraser region) attending. I found this experience to be an exceptional beginning to my journey at West Coast and into the legal profession as an articled student. 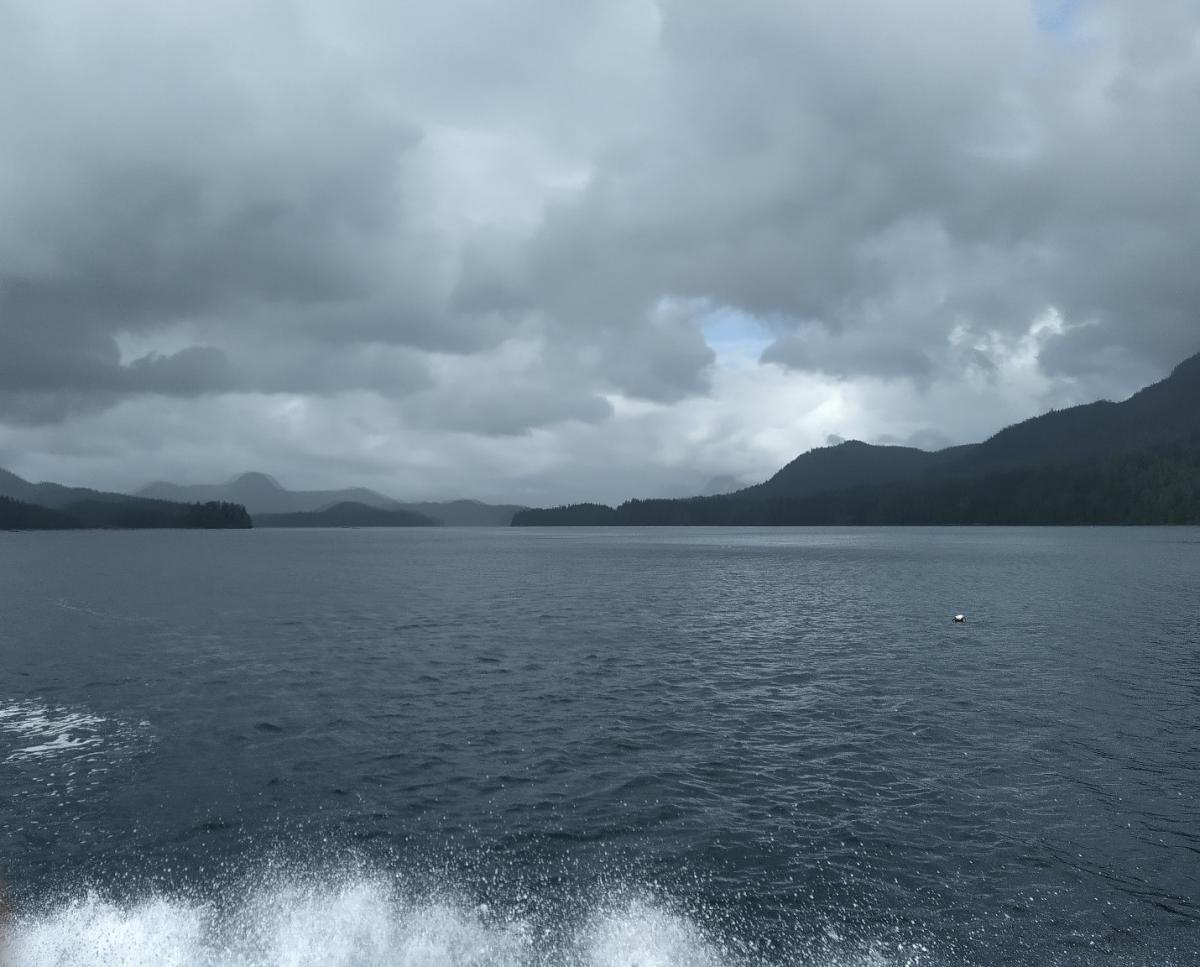 View of Wanačis ḥiłhuuɁis and nearby ƛaʔuukʷiʔath and Ahousaht territories from the water (Photo: Navjot Jassar)

Upon arrival, master carver and knowledge keeper Tutakwisnapšiƛ Joe Martin welcomed and invited us to gather around a pole he had almost finished carving. The warm aroma of cedar enveloped us as Joe explained the laws that are engraved into this tree. Joe said that when Europeans arrived, they had contempt towards Indigenous peoples for not knowing how to read their language. However, the Europeans could not and, and still mostly cannot, read the laws of the nuučaan̓uuɫɁatḥ peoples depicted in poles. 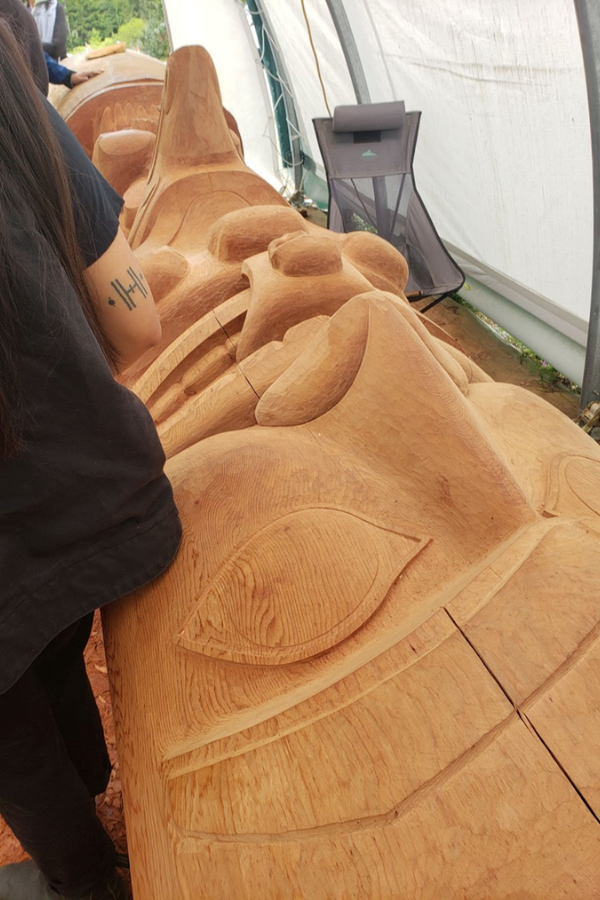 Settlers’ inability and unwillingness to recognize Indigenous law continues to be an obstacle for the enforcement and recognition of these laws. For example, provincial or federal environmental legal protections that aim to keep humans away from demarcated ecological spaces except for recreational purposes, have interfered with Indigenous peoples’ ability to access their territories and practice their way of life.

As a recent graduate of the inaugural cohort of the Indigenous law/common law dual degree program at the University of Victoria, I am interested in exploring creative ways to overcome the challenges faced in revitalizing Indigenous law. Indigenous legal orders have been systematically attacked by colonial governments, and continue to face incessant obstacles to their implementation today.

One tool of colonization was to isolate Indigenous peoples from their support networks and alliances. This retreat served to push back against this form of violence through a co-learning model that fostered rebuilding connections that were damaged through the process of colonization, and nurturing new ones. 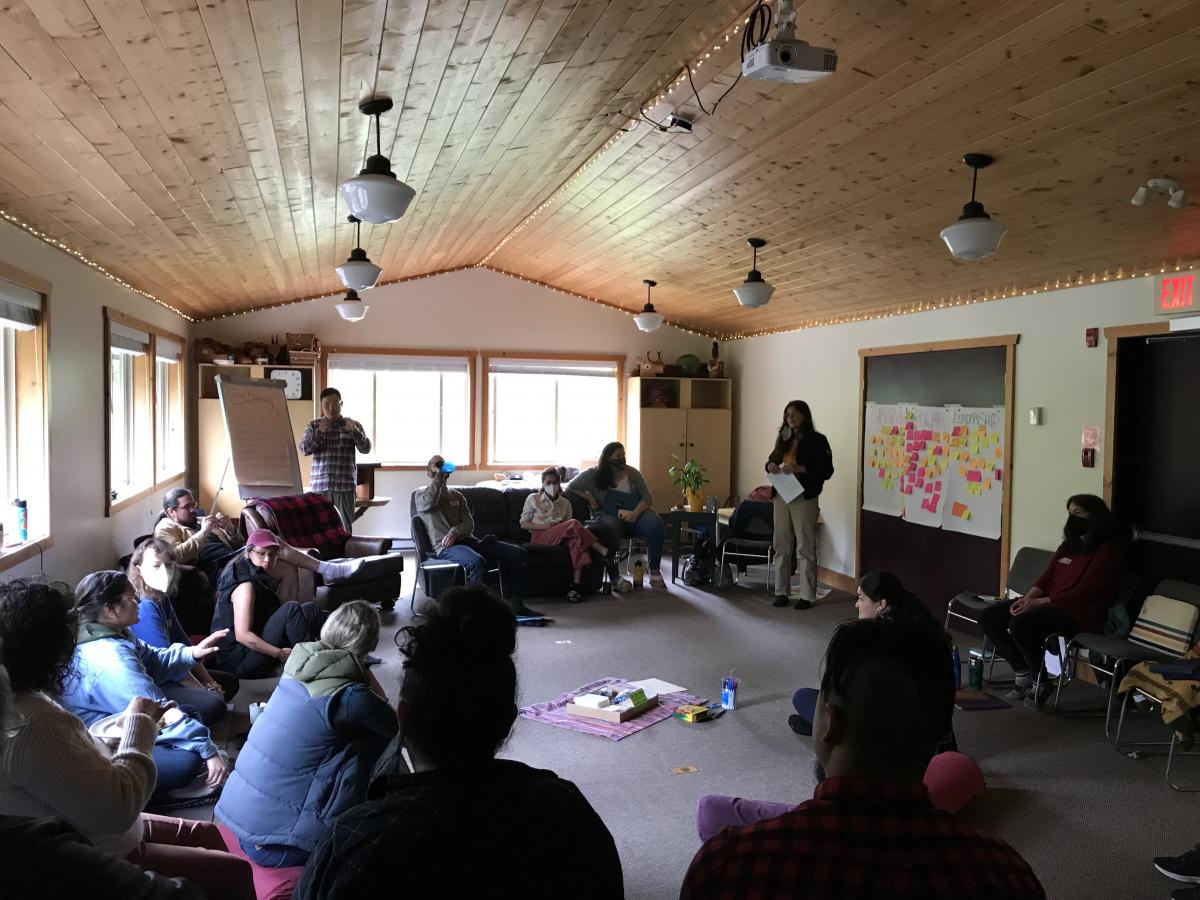 Walking the Big Tree Trail around Wanačis ḥiłhuuɁis, the stories of this place echoed in my mind as a powerful example of the importance of strong relations. It was in the summer of 1993 that what became widely known as the War in the Woods reached its peak, with thousands of settler allies heeding the call of the First Nations to protect the island and the rest of Clayoquot Sound from clear-cut logging. It was, at the time, the largest act of civil disobedience in the country.

Today, a forest that was once marked for razing is now a Tribal Park. It is an example of what is considered an Indigenous protected and conserved area (IPCA), a contemporary English term to describe a form of governance upheld by first peoples for millennia. It describes the Indigenous practice of place-based stewardship that does not create a binary of sacrifice zone and protected zones, but fosters integrated well-being for all that does not rely on industrial resource extraction. 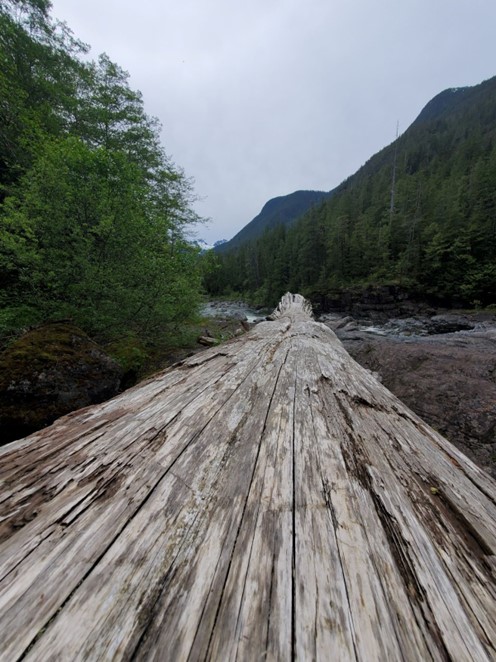 As a part of the retreat, the RELAW team facilitated workshops, activities and discussions to support co-learning about effective strategies for implementation and enforcement of Indigenous law, as was accomplished at Wanačis ḥiłhuuɁis. We engaged with a variety of topics including applying strategies for: engaging with different groups or institutions, aligning the behaviour of the Crown or proponents with Indigenous law, using communications as a means of enforcement, and mapping power and influence to reach identified goals. RELAWyers (lawyers working with the RELAW program), RELAW partners and our host nations shared their stories as part of the co-learning process. 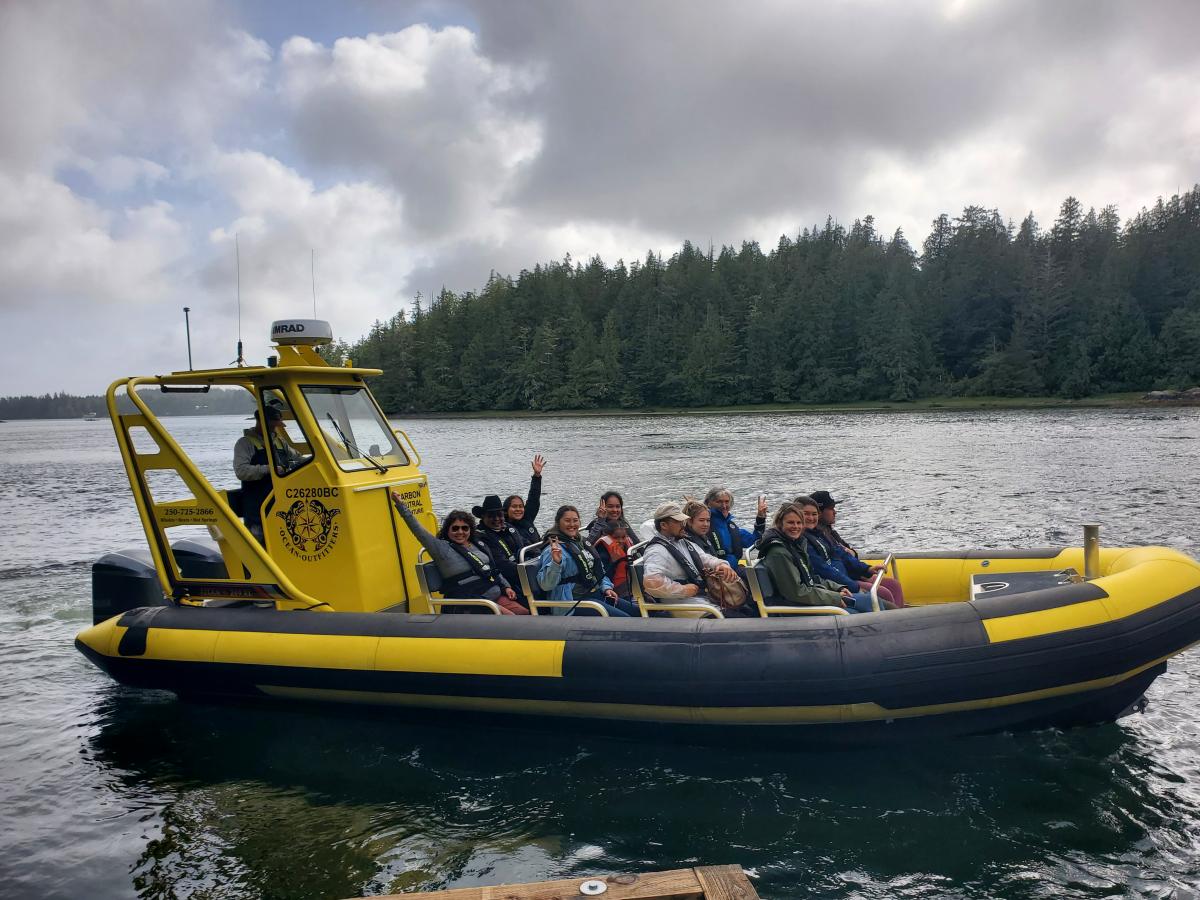 As a result of the War in the Woods, Tofino has become a prime tourist destination. Every summer, thousands of people from across the globe flock to this small town to catch some waves or a glimpse of wildlife such as bears, eagles and whales. It is the tireless stewardship of ƛaʔuukʷiʔatḥ people that has nurtured this place to be the oasis that it is today, yet it is the settlers who reap the greatest benefits.

During the RELAW retreat, Seit-Cha (Terry Dorward), Project Coordinator at Tla-o-qui-aht Tribal Parks, recounted a story of how the community enforced their laws when a member did not share their harvest. This story carries within it the nuučaan̓uuɫɁatḥ law that one is required to share, which spurred the introduction of the Tribal Park allies ecosystem fee. This initiative invites local Tofino businesses to make a voluntary contribution of 1% of their profits to the ƛaʔuukʷiʔatḥ Nation to recognize their continuous work to steward the lands and waters, and host visitors on their territory. Hearing this story, it struck me that an obligation to share inherently cultivates strong relations. 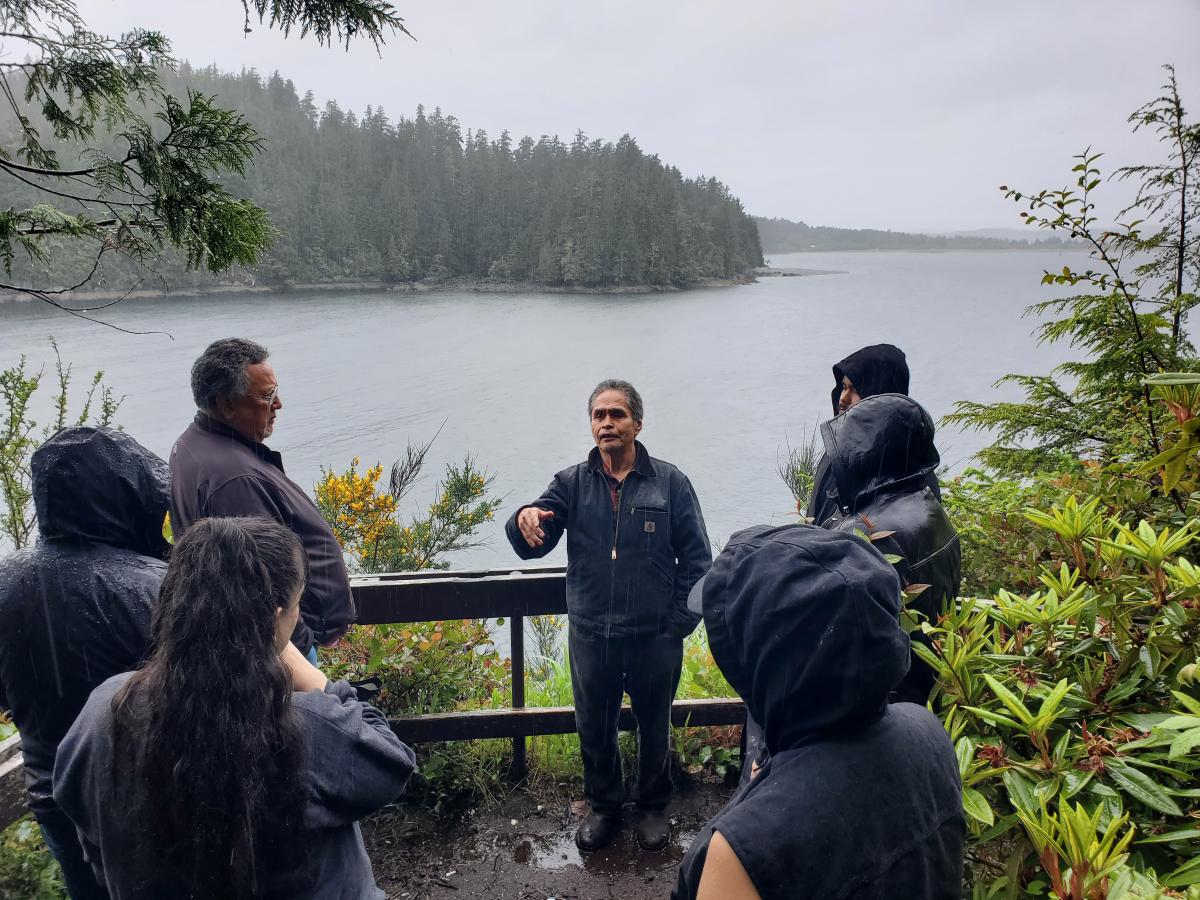 The legal principle of sharing arose more than once during the retreat. As the magnificent forest blanketed us at Wanačis ḥiłhuuɁis, Joe shared teachings he received from his father and grandfather about felling trees. He cannot simply take any tree he thinks would be the right shape and size for a č’apac (canoe), for example. To be legally permitted to take a tree is a process of negotiation with the many beings in the forest who have agency and therefore rights and responsibilities, including the cedars themselves. For instance, he must be certain that no eagles are nesting within 100 metres of the tree, be aware of any animals who may be denning nearby, and avoid cutting too close to a salmon-bearing stream. Trees were only cut in the fall and winter to protect nesting birds.

Through the implementation of these laws, the ƛaʔuukʷiʔatḥ people have ensured that the forests are cared for in a way that shares generously with neighbouring beings who also rely on the space for survival, as well as for all those who will come in the future. It is long overdue for Canada and British Columbia to stop attacking Indigenous law and learn to share the legal landscape with Indigenous peoples, for the well-being of all who live on these lands and benefit from clean air and water. 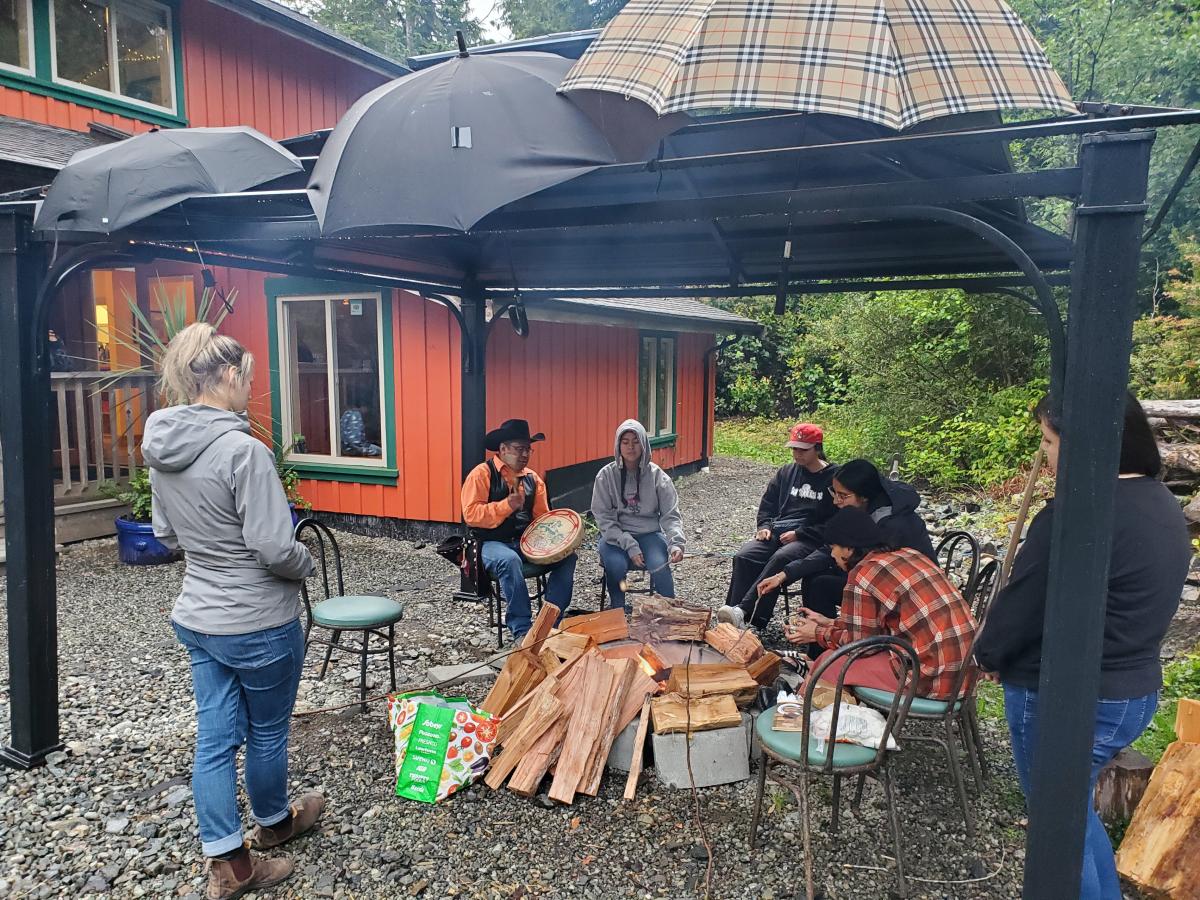 These stories were a few of many shared by RELAW co-learners that generated rich discussions on innovative strategies to enforce Indigenous laws on the ground today. As a relatively recent migrant to this part of the world, I believe it is the responsibility of all newcomers to learn and abide by the laws of the Indigenous peoples on whose territories they are situated, which is why I chose to study in the JD/JID program. This is essential to the process of decolonization and requires the hard work of relationship building and repair between settlers and Indigenous peoples, and between humans and all forms of life.

I am deeply grateful to our ƛaʔuukʷiʔatḥ hosts for providing a space for this diverse group of people to do this work and dream big about the possibilities for Indigenous law revitalization. I experienced coming together to share stories, share meals, and share time on the land as medicine that strengthens us to do this work in a better way. I witnessed participants’ pride in sharing their stories and inspiration through listening to others. I witnessed the vibrancy of youth mingling with the wisdom of elders. I witnessed law being uncovered through dialogue and the practice of storytelling. I witnessed many sparks within a growing movement as Indigenous law awakens from its slumber.