Say no to cosmetic pesticide use | West Coast Environmental Law

Say no to cosmetic pesticide use 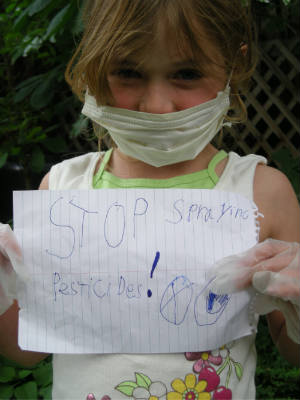 The government is currently consulting on bylaws that would continue to allow cosmetic pesticide use, as long as commercial lawn care companies or other licensed applicators apply the pesticides.  British Columbians have repeatedly called for a ban on pesticides used for cosmetic purposes, and the government needs to hear that message again.

The comment period has closed but you may still email the Ministry of Environment, the premier and your MLA. Click here for more background

It was only two years ago that Premier Christie Clark promised that the province would ban cosmetic pesticide use– pesticide use on lawns and ornamental plants.  But much has happened in a year, and the province is instead currently consulting on regulations that will allow cosmetic pesticide use – as long as a commercial lawn care company or other licenced applicator actually applies the pesticides. Between now and December 8th (when the consultation closes) the BC government needs to hear (yet again) that British Columbians want and deserve a ban on this unnecessary pesticide use.

Ontario, Quebec and Nova Scotia have all banned the use of cosmetic pesticides, as have 40 municipalities across BC.  In 2011 both the Premier and the Opposition agreed that a ban was the solution.

After her initial enthusiasm, Premier Clark struck a “Special Committee” of MLAs to look into a possible ban.  The Committee, chaired by MLA Bill Bennett, split along party lines.  The Liberal MLAs wrote a majority report that recommended against a ban (which they viewed as unscientific, despite the many doctors and health organizations supporting a ban).  Instead the Committee proposed a scheme under which cosmetic pesticide use should be licensed.  The NDP MLAs on the Committee supported a ban.

British Columbians have consistently favoured a ban over an attempt to regulate cosmetic pesticide use.  Polls show that 76% of British Columbians favour a ban, and members of the public who engage in government consultations have consistently favoured a ban.  A ban is supported by a wide range of health and environmental organizations, including the Canadian Cancer Society and the Canadian Association of Physicians for the Environment.  Most recently, the Special Committee reported that:

Of the 7,300 people who responded to the [Committee’s] e-questionnaire … [a]lmost 5,000 supported a ban on the sale and use of pesticides for cosmetic purposes. Their reasons for supporting a ban, ranked in order of most to least common, were: pesticides are harmful to the environment; pesticides pose a risk to human health; there are safer alternatives on the market; to promote consumer safety; and to reduce the reliance on pesticides.

Despite the fact that 69% of the respondents to the Committee’s survey favoured a ban, the government is claiming that its “licensed users” approach, which definitely is not a ban, is aimed at “address[ing] concerns expressed in recent consultations on the cosmetic use of pesticides conducted by the Ministry and the Special Committee of the Legislature on Cosmetic Pesticides.”

From a health and environmental perspective we see a host of problems with the government’s licensed user approach, and only one possible advantage.

The advantage is that the actual application of pesticides will be done by people who (due to their training) should be able to understand, and presumably follow, the pesticide labels – which is essential to minimizing the risks posed by pesticides.  Arguably the additional cost of paying for lawn care companies might dissuade some people from applying pesticides, or convince them to use the safer alternatives exempted from the new rules.

Now consider the many down-sides:

Pesticides used in close proximity to families, children and pets - Children and pets, as well as pregnant women and others who are vulnerable to pesticide exposure, are likely to come into contact with pesticides used on lawns and in yards.  One need only read pesticide labels to realise that these are dangerous substances which should not be used lightly.  Consider this condition (which seems to rely on especially compliant children or alert parents), which appears on some domestic pesticides: “Do not allow others such as children and pets on treatment area during application or to re-enter treated areas until spray has dried.”

Pesticides entering the environment - Ontario’s ban on cosmetic pesticides resulted in a dramatic drop in the levels of pesticides being detected in urban streams.  The Ontario Ministry of Environment discovered one year after its ban went into effect:

Stronger, more dangerous pesticides may be used - Some lawn care companies apparently view themselves as providing a commercial service, and thus use “commercial” pesticides on lawns, rather than the “domestic” pesticides that federal government considers appropriate for residential users.  Commercial pesticides are often stronger and more hazardous than pesticides registered for domestic use.  Take, for example, the pesticide Par III, which contains Mecoprop-P, 2,4-D and Di-Camba, the label for which says (among other things):

Toxic to small wild mammals, birds, aquatic organisms and non-target terrestrial plants. TOXIC to broadleaf terrestrial plants. … The use of this chemical may result in contamination of groundwater particularly in areas where soils are permeable (e.g., sandy soil) and/or the depth to the water table is shallow.

At least one lawncare company that operates in BC, Canadian Lawn Fertilization, actually advertises its use of Par III for lawns on its website, and we’re aware of other lawn care companies using this pesticide on residential lawns and school yards.  It is not entirely certain that this is legal (since the pesticide is supposed to be used on “turf”, not lawns), but it has been described to us by Health Canada staff as an area where there is some “wiggle room.”

Difficulty of enforcement – A ban on cosmetic pesticide use is easy to monitor and enforce, while a system which requires licensed applicators to comply with technical legal requirements and license conditions is not.   Since the Integrated Pest Management Act was brought into force in 2007 there has never been a conviction under the Act (54 tickets for $575 each, and 4 enforcement orders, have been issued).

That’s a lot of problems arising from allowing the use of pesticides on lawns and yards; especially when you can have a nice lawn (if you choose to do so) without pesticides.

What to tell government

We need you to tell the BC government that British Columbians want, deserve and have been promised a ban on cosmetic pesticide use, and that we’ll accept nothing less.  You’ll probably get the biggest bang for your buck if you email or send them your own (unique) letter.  Send it to cindybertram@shaw.ca, but remember to cc the Premier (premier@gov.bc.ca), as she’s ultimately responsible for back-tracking on her promise.

If you’re pressed for time, you can also click here to go back to the above form and send a quick pre-drafted email (you can modify it) to the Ministry of Environment, the Premier and your own MLA.

British Columbians have spoken loudly about the need for a cosmetic pesticide ban.  We need you to raise your voice again.

Ready to send a letter? Click here to go back to the form.