On the river’s edge 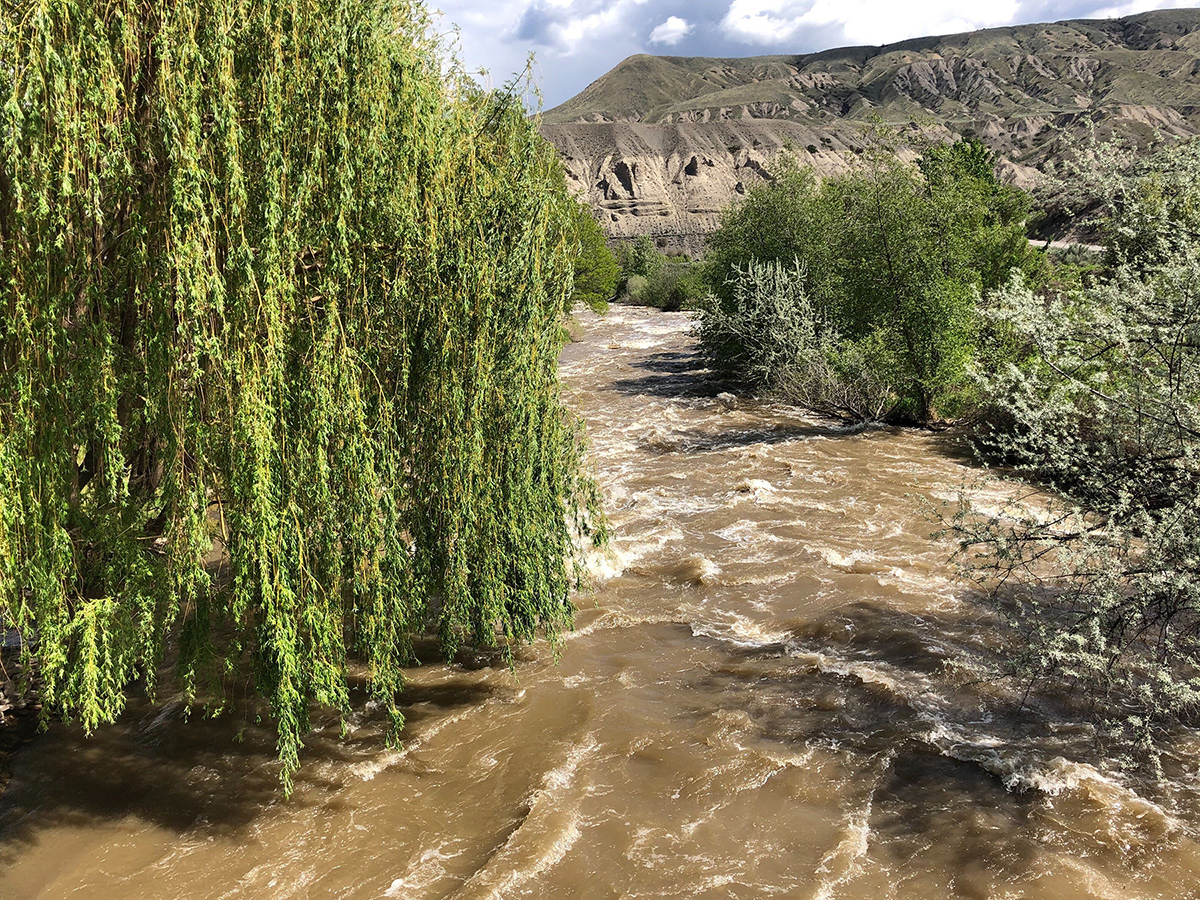 An update from a unique flood season in Ashcroft, BC, on the territories of the Nlaka'pamux and Secwépemc Nations.

I didn’t know how bad the flooding would get when I moved to Ashcroft in early March, about two weeks before the provincial health authorities presented BC residents with COVID-19 self-isolation guidelines. The opportunity to move came up last year sometime, after my dad, aka ‘Ashcroft Man’ got married and realized he couldn’t continue maintaining our family’s small hops farm with his new adventure underway.

At the best of times, moving from cities to smaller communities tests a wide range of assumptions about how we fit in to a place. But moving at the start of 2020 has felt like a psychological exercise in some strange, alternate universe. The uncertainty of 2020 has challenged me to think more about the connections between local vulnerabilities to global challenges like pandemics and climate change.

Seeing how the community I am now a part of has dealt with this year’s extreme flooding amidst a global pandemic has given me hope for local resilience.

Flooding on the Bonaparte River

Ashcroft is in one of the hottest and driest parts of the country. It’s a unique microclimate and is part of the only semi-arid desert in Canada. The tunnels that punctuate the drive along Highway 1 up the Fraser Canyon feel like portals to a whole new climate.

The desert species that exist in this area don’t fit into the idea that BC is mostly a temperate, wet province. Look up and you’ll see river-skating ospreys, mountain bluebirds and bald eagles. Look down and you can marvel at plant cover like the prickly pear and sagebrush buttercup that provide dense habitat for rattlers and desert night snakes.

But, despite calm appearances, the Interior of BC is undergoing serious changes as the planet warms. Some are glaringly obvious, and others offer more gentle reminders. The speckled patches of clearcuts, charcoal and rust coloured trees flanking Highway 1 remind us of the mountain pine beetle epidemic and ongoing deforestation that have worsened wildfires in the area. This drive along the Fraser River instantly causes me to reflect on interconnected ecosystems and I wonder how salmon around Big Bar are doing after last year's landslide blocked thousands of Chinook from spawning.

Each spring the snowpack in the Upper Fraser and Cariboo mountains melts down the Fraser, Bonaparte and North and South Thompson Rivers, and they swell and flush as early green sweeps the canyon. Like most communities in the Interior, Ashcroft relies on rivers to breathe life into the valley. The Bonaparte River runs through our backyard, just 200 metres from where it enters into the much larger Thompson River, so if you’re here you interact with the river every day.

I’ve been coming here since I was born, and the Bonaparte is at the centre of everything we do. Our domestic water comes from a well on the floodplain, and we pump straight from the river to irrigate the hopyard, the fruit trees and our vegetable garden. In the summer months, it’s where we go to bathe and seek refuge from Ashcroft’s hallmark summer temperature, which is somewhere between very hot and almost scalding. Being so close to the river's edge means my entire family has done some informal watershed monitoring at one point or another, so we notice when something seems out of the ordinary.

The day I got here this March, my dad told me I should join the local Ashcroft-Cache Creek Facebook group because it would be a good way to 'get connected' in town while we’re self isolating. Immediately I could see that the group wasn’t just a place for social exchanges, and rather served the function of providing its community with valuable information, offered support and advice.

So, when Cache Creek and residents near the Bonaparte River were put on flood warning, and then later on evacuation notice, I went on the Facebook group to see how other people were responding and was floored by the amount of information that was being shared. I could scroll through pertinent COVID news and amended flooding protocol, and then someone would post about who was running dinner deliveries out to isolated seniors.

With the information I found there – along with what I was being sent from my dad off the BC River Forecast Centre website – plus some very good advice on flood modelling predictability from a water resource analyst friend of mine, Max Osburn – we began the process of preparing for the flood. For us, that meant hauling up pumps, turning off our domestic water and filling up our bath tub for household water use.

The last time there was flooding this bad was in 1991. I was pretty young, so I only partly remember because of the photos I’ve seen. 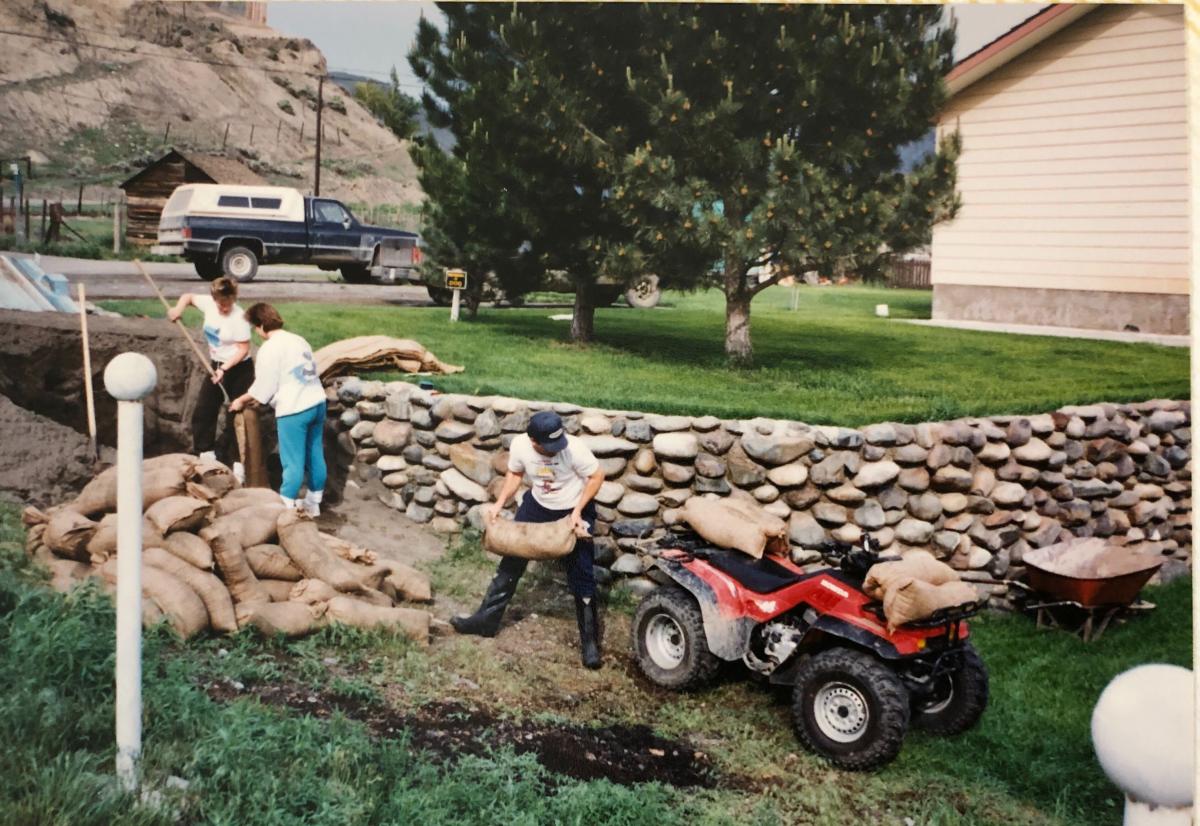 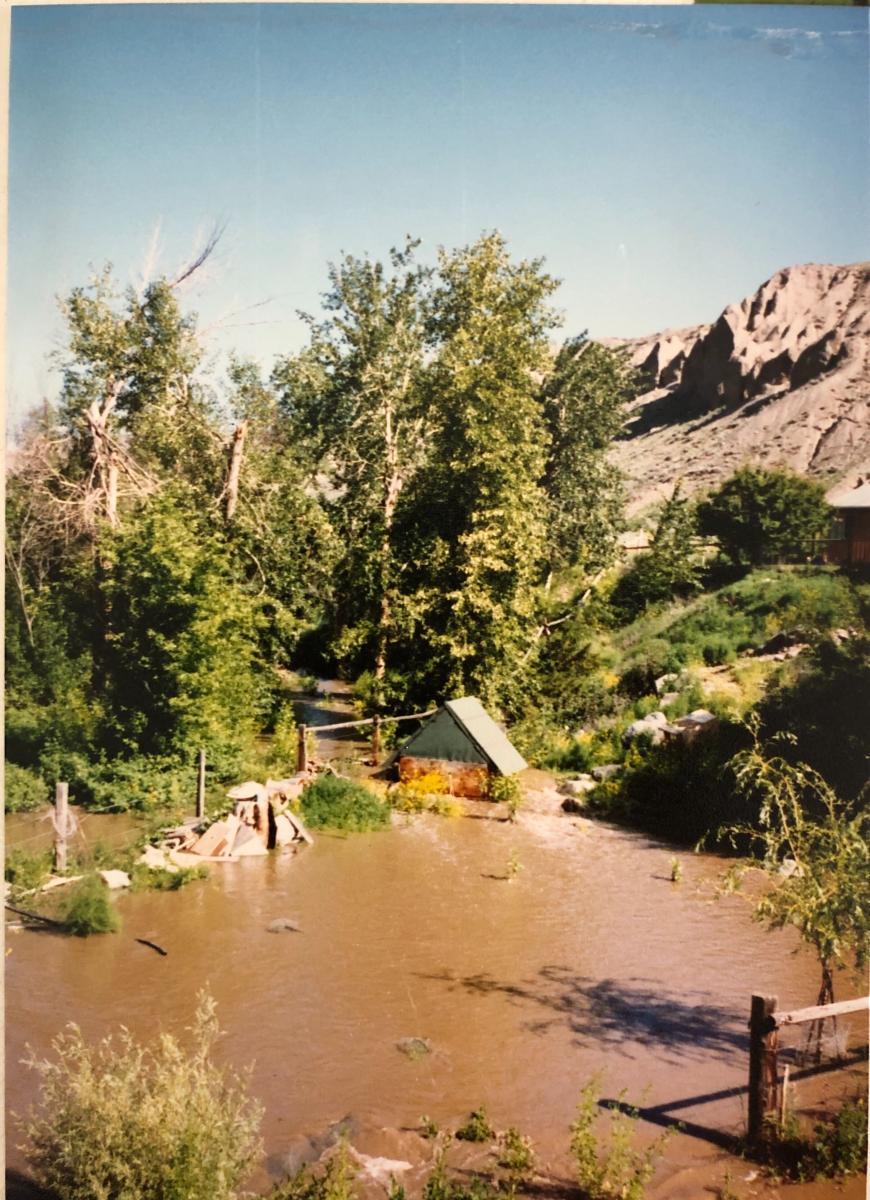 This year, seeing how a little winter trickle can expand over a couple of weeks and then burst river banks over a couple of days, has refreshed my memory. And we've benefitted from local knowledge about the river. I kept checking on the neighbour’s water level to make sure their chicken coop wasn’t going under, and I noticed neighbours keeping an eye open for us too. People walked over the bridge nearby watching the intake to our irrigation pump as it shuddered and wobbled on the banks. My dad called via Facetime and warned us that it was time to pull the pump, and we’re lucky we did – because the next day the entire ledge it had been sitting on was submerged.

Hit on both ends

After seeing how well people were responding to flooding while carefully following COVID-19 guidelines, it became obvious to me that this community is exceptionally skilled at connecting the dots. This ability to connect seemingly separate events may also be shaping how the community responds to climate change. Ashcroft was devastated by the 2017 wildfires – the Elephant Hill fire came close to taking out our place, and did take the vegetation off 40-70% of the entire Bonaparte River watershed. And with the resulting back-to-back flooding the impacts of climate change are not abstract concepts. They are very real, and they’re here right now.

Summer wildfires are becoming more extreme, and the pile-up of dense ash makes the forest floor largely impervious to water, so snowmelt and rainwater that would normally be absorbed by forest root structures and biomass now goes directly into our rivers and streams. Fires also cause a build-up of debris and logs that pose unpredictable risks – which makes living along smaller waterways like the Bonaparte and Chilko Rivers a particularly vulnerable experience at times.

These types of problems mean you can’t talk about flooding without talking about forest fires. For me, watching massive half-burnt logs roll down our sludgy, chocolate milk-coloured river has made it clear how interconnected these events are.

What about next year?

Just because people here have honed their ability to improvise under rapidly changing circumstances like COVID-19 and deal with emergencies like this year’s flooding, it doesn’t mean they aren’t questioning their capacity to manage worsening events, which are occurring at an increased rate.

Climate change touches everything here, and it’s attracting the attention of young people and those who otherwise may have reservations about attributing fires and flooding to global warming. Council members are responding by becoming more engaged in government plans to address fire and flooding risks.

When I spoke with Max he explained how – despite the resources being poured into enhancing warning systems – linking climate data and a propensity for wildfires while measuring flood predictability is complicated (to say the least). Forest fires are unpredictable by nature, and even the most sophisticated flood models are constantly changing with annual snowpack and seasonal environmental data. Throw new emergency preparedness procedures and social distancing in the mix, and the web of potential scenarios becomes increasingly complex.

While people in Ashcroft seem to be managing the psychological challenge of dealing with multiple threats simultaneously, it’s hard not to worry about what the future may bring. During the fires in 2017, all egress roads were blocked and powerlines, phone lines and cell phone towers were destroyed, so there was no communication at all when the fire was close to lighting up the entire northern part of the village. The local resiliency solution? – establish muster points around the town, and buy a great big bell for the fire station so that people can be warned when the technology all fails at once.

This year's flood forces us to examine what we’re doing to prevent escalating disasters from causing even more harm. Now that I’m living here, I have questions about what funding may be available to help high-risk flood areas like ours get prepared for next season. Will the provincial government be able to help, or will economic stimulus money reach Ashcroft at all?

In towns like ours, it seems as though a multi-pronged response is becoming a necessity, and living on the river’s edge highlights how connected these issues are. With the potential for flooding getting worse each year, we’ll need an integrated approach to manage their impacts. We'll need to rely on complex models so that we can assess the risks we're meant to prepare for. We'll need procedures in place that will help speed recovery in the face of multiple ongoing disasters – but ultimately, our ability to adapt will depend on the strength and flexibility of our community in confronting climate change.