This op-ed was originally published in the Georgia Straight on December 17th, 2021.

At the same time, NPA councillor Melissa de Genova tweeted a warning that the funding mechanism that the mayor was celebrating, "downloads onto people struggling to survive in our city." 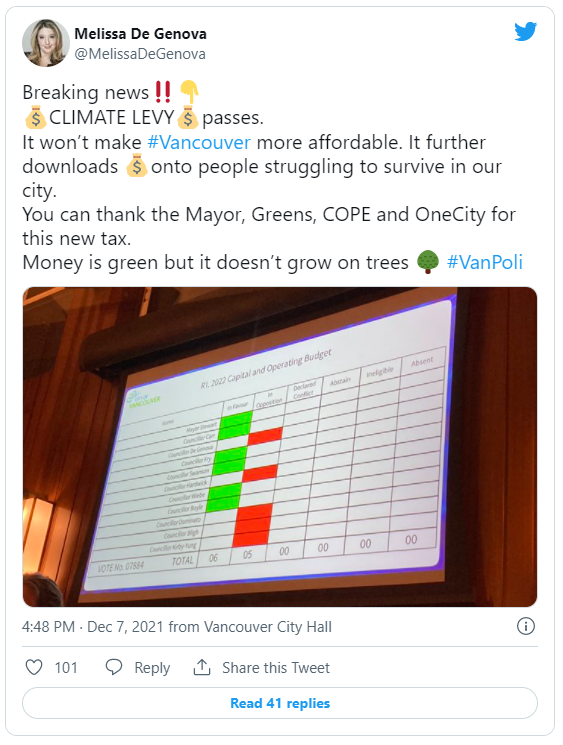 At the centre of the controversy are new investments in climate action and a “levy” that aims to raise over $100 million over the next decade to pay for the city’s Climate Emergency Plan. It turns out climate change is costly. (Who knew?)

It’s not just the cost of reducing Vancouver’s greenhouse-gas emissions, but also the cost of preparing the city for future floods, droughts, storms, and heat waves. Not spending money now to prepare for such climate impacts is going to cost us more in the future.

A deep dive into the 2022 budget reveals that the city is spending tens of millions on preparing for climate impacts, such as “constructing flood protection assets to protect against storm surges, king tides and sea level rise." City staff have previously estimated that more than $1 billion is needed to keep Vancouver communities safe from rising seas, so these costs are only going to rise.

Now, we love a good climate-centered budget that puts planning, preparedness, and adaptation on the menu, but as we’ve witnessed over the past six months, B.C. communities and local taxpayers are already shouldering massive costs due to fossil-fueled climate disasters. Taxes will probably need to rise as the true costs of climate change, and the need to protect us from it, become clear, but this is not a long-term funding solution, and not fair for communities.

You know what would make the city’s budget better for taxpayers and better for the climate? Make the companies that are profiting most from fossil fuels that cause climate change pay their fair share of climate costs.

Lately, it has become harder for oil and gas companies to outright deny their role in causing climate change, but somehow everyone still assumes that these companies, and their investors, can pocket billions of dollars in profits from oil, gas and coal, while the taxpayers are expected to pay for the costs of the fossil-fuel economy.

In addition to being a burden for taxpayers and Vancouver’s budget, this is bad economics. As long as these companies continue to profit from delaying action on climate change, they will continue to do what they have done for decades: deny the science, lobby oil-friendly politicians, and craft anti-science advertisements that claim they are solving the problem even as they expand fossil-fuel production.

We now know that just 90 entities—mostly oil, gas, and coal companies like Chevron, ExxonMobil, and Shell—are responsible, through their operations and products, for two-thirds of the greenhouse gases in the atmosphere. We can break that down to particular companies: Chevron is responsible for 3.1 percent of greenhouse gas emissions and therefore, we argue, should pay for 3.1 percent of climate change costs.

A lawsuit by local governments to claim a portion of climate costs from fossil fuel companies is realistic and possible.

In 1998 an internal Shell Oil memo sketched out a scenario in which a series of climate impacts, similar to what B.C. experienced this year, might spark a class-action lawsuit against “fossil-fuel companies on the grounds of neglecting what scientists (including their own) have been saying for years: that something must be done.”

In 2017, one month after West Coast Environmental Law and more than 60 other organizations publicly called on B.C.’s local governments to consider a lawsuit against fossil-fuel companies, Chevron notified its investors and shareholders that it might be sued for its contribution to climate change. And in 2019, 28 law professors from across Canada wrote to local governments encouraging them to consider suing fossil-fuel companies. Dozens of local and state governments in the U.S. have already filed lawsuits of this type.

Cities like Vancouver have an opportunity become leaders by demanding climate accountability from fossil-fuel giants, while also protecting their taxpayers against a flood of climate-related costs that we have only begun to see. This starts by rejecting the subtle tools of denial and delay used by major polluters (and their investors, insurers, and political allies) that assume that we, not they, will pay for the true costs that their products are imposing on our cities and towns.

Once fossil-fuel companies and their investors start paying the full costs of climate change associated with their products, we can resolve the tensions between Mayor Stewart’s concerns for climate funding and Coun. De Genova’s concern for the impact of climate costs on taxpayers, while challenging the market assumptions that pretend that fossil fuels are a good investment.

Top photo: BC Ministry of Transportation via Flickr Creative Commons