Privatizing Salmon Protection: The Failure of the Riparian Areas Regulation 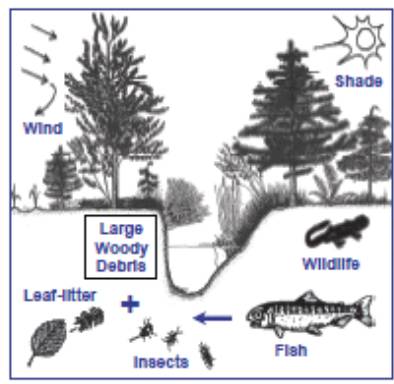 This week and next week seem to be the official launch of the Environmental Law Centre’s Maintaining Supernatural BC for our Children.  On Tuesday I joined ELC Legal Director, Calvin Sandborn, and another contributor to the book (Jamie Alley) in presenting a webinar organized by POLIS on the chapters of the book related to water (my piece was the chapter on the Riparian Areas Regulation, reprinted below).  Tonight (March 28th) is the Vancouver launch.  And next Wednesday (April 3rd) is the Victoria launch.

So in that vein, here is the second of our posts reprinting content from the book that was authored by West Coast Environmental Law staff. (For those who missed it, here's the first).

Privatizing Salmon Protection: The Failure of the Riparian Areas Regulation

British Columbians care a whole lot about salmon.  In a 2011 poll, 86% of British Columbians agreed that development should not come at the expense of salmon habitat.  In BC, key protection for fish habitat is supposed to be provided by the Riparian Areas Regulation (RAR) – a law intended to ensure that residential and other development is set back from the waterways that provide critical fish habitat on lands regulated by local governments.

Unfortunately, this law is not working because the RAR turns responsibility for assessing exactly what is needed to protect fish habitat over to private professionals – consultants hired by the developer.  If that’s not the fox guarding the hen house, it’s at least the fox hiring the guard.

It’s not just RAR – over the past few years more and more environmental laws have turned over environmental protection to privately hired professionals, and the government is planning to expand the approach further.  But the Riparian Areas Regulation provides a great case study to show how laws of this type are failing salmon, failing the environment and failing the public.

Under the Riparian Areas Regulation, anyone wanting to build close to a stream is required to hire a biologist, engineer, forester or other “qualified environmental professional” to apply government rules to figure out how far back from the fish habitat their new building should be located and any protective measures that should be taken.

Unfortunately, the professionals are frequently less than professional.  In 2009, a review by Ministry of Environment staff of the work done by the professionals found that 53% – more than half – of assessments had not been done properly for one reason or another – and this figure was 62% for Vancouver Island.  While this extraordinarily low rate of effectiveness was blamed on a learning curve for some professionals, internal ministry documents obtained by West Coast Environmental Law appear to recognize that the ministry rules being applied by private professionals to protect fish are often unclear and capable of different interpretations:

[Staff] described their experiences with QPs [qualified professionals] where their performance was considered to be sub-standard.  ... [O]ften, [Staff] are seeing performance [by professionals] that is not clearly non-compliant, is marginal, and it is less clear when action should be taken and that action should entail.  ... For many of the Ministry’s QP requirements, it can be difficult to determine the performance standard; it is not as clear as when an engineer’s bridge collapses.

How the RAR is applied can make a huge difference for salmon and other fish.  In 2009, experts hired by SmartCentres – a mall development company – examined the fish habitat on lands in the estuary of Salmon Arm’s Salmon River.  Their report identified a relatively small area required to protect fish habitat, justifying SmartCentres’ plans to build a mall on most of the property.  A local conservation group, the Wetlands Alliance: The Ecological Response (WA:TER), disagreed with the report prepared by SmartCentres (which they had to obtain through a freedom of information request), and, at considerable cost, took the unusual step of hiring its own experts.  WA:TER’s experts found that almost two-thirds of the property was important fish habitat and should have been protected under the RAR.

After much discussion, including the intervention of a consultant hired by the Ministry of Environment, the experts hired by SmartCentres accepted that the larger area was correct.  The SmartCentres development is now proposed to be built on roughly one-third of the property, largely avoiding the controversial fish habitat – a great win for WA:TER and for fish habitat.  However, protection of fish should not depend on whether or not a local group springs up to raise tens of thousands of dollars for experts to challenge the system.

How much valuable habitat is lost where no citizen heroes exist to watchdog events?

Meanwhile, another recent court case has demonstrated that the federal and provincial governments may not even have the power to step in when the privately hired experts get it wrong.  The BC Court of Appeal rejected the suggestion that the federal government could step in to “vary” an expert’s view of the buffer and other measures that should be required to protect fish.  The Court emphasized that the RAR turned the power to set buffers and other requirements over to the professionals hired by the developer, and disparaged the government’s approach which the court said “appear[s] to be based on a scheme that is not found in the [law].”

Graphic from MoE Pamphlet on RAR, originally by Scott Barrett and Dani Tarangle.