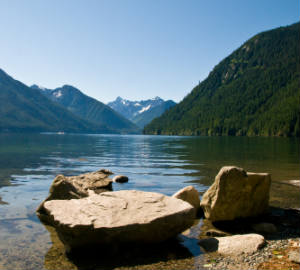 The BC Parks Service says that the provincial parks and conservancies are a “public trust” for the “protection of natural environments for the inspiration, use and enjoyment of the public.” These noble sentiments are difficult to square with Bill 4, the “Park Amendment Act, 2014”, introduced yesterday (Thursday, February 13th) into the BC legislature.  Bill 4 allows for industry (and others) to carry out “research” in provincial parks related to pipelines, transmission lines, roads and other industrial activities that might require park land.  It also reduces legal protection for smaller parks and enables film production in BC parks.

Paving the way for industrial exploration?

BC’s Park Act creates several different types of protected areas, but most provincial parks are “Class A” Parks, which means that they are “dedicated to the preservation of their natural environments for the inspiration, use and enjoyment of the public.”

Anyone taking resources or disturbing land in a Class A provincial park must obtain a “park use permit” from the Minister of Environment. That permit cannot be issued unless the Minister decides that “it is necessary for the preservation or maintenance of the recreational values of the park involved” and that it will not interfere with the use of the park “in accordance with its purpose.”  That’s an important test – in 2005 the BC Supreme Court ruled that it prevented the BC Minister of Environment from relocating a road in Grohman Narrows Provincial Park in order to accommodate a nearby developer.

But Bill 4 removes that requirement for “research.”  Instead the Minister of Environment can issue a park use permit for any research, even if the research will negatively impact the park, if it “relates” to:

In addition, the Minister can approve any “research” that is “consistent with the purpose of the protected area”; consistency is a weak legal test that seems to provide far less protection for parks than the current Park Act.

So what is “research”?  Well, unfortunately that’s not defined anywhere in Bill 4, although the government press release provides non-threatening examples such as “vegetation sampling, fish surveys and geotechnical studies.”

We know that calling something research doesn’t mean that it’s not destructive, or inconsistent with the park purposes.  Does research include exploratory drilling?  Ore sampling?  Road building?

The Tsilhqot'in National Government ultimately obtained an injunction preventing these activities, but such work could broadly be termed research.

The government press release also assures us that the permits will be considered “only after a thorough review of protected area values, including management plans, impact assessments and conservation assessments.” But this requirement is nowhere to be found in Bill 4.  A “trust us, we’re government” approach to parks legislation is not good enough.

The real purpose of this legislation is to further enable the government’s policy which allows industry to propose amendments to park boundaries where existing parks may be inconvenient.  The anticipated wide-spread use of this policy is obviously troubling, and this provision will only legitimize these types of removal of land from parks.

There’s a certain conflict of interest in allowing industry (albeit with government permission) to trash a part of a park in the name of “research” when they want to see that land removed from the park.

Environment Minister Polak seeks to justify the changes as benefiting more than just industry, and as potentially avoiding environmental harm:

Polak noted that not all permit applications will be from companies seeking industrial projects. … The Kitselas First Nation near Terrace is seeking an amendment to 269-hectare Kleanza Creek Provincial Park to allow for access to drinking water. Access roads are another potential rationale for a park boundary amendment.

She noted that allowing a small land removal from a park might result in less environmental damage than if a company had to seek an alternative route.

However, there is little doubt that this amendment is intended to benefit industry in the vast majority of cases.  Nor is there any requirement in the amendments that research, or changes to park boundaries, only occur in the limited circumstances that she is referring to.

There are two other amendments in Bill 4 that also weaken protection for parks.

Second, it gives the Minister the power to grant park use permits to the commercial film industry as long as the filming activity “is not detrimental to the recreational values of the park” – again a far weaker test than whether the permit is “necessary” for the park purposes and one that ignores the conservation values of the park.

Bill 4 seems to be premised on the idea park protection unreasonably constrains government and industry.  That’s not consistent with the BC government’s claim that parks are a public trust, to be managed for the protection of BC’s natural environment, and the inspiration, use and enjoyment of British Columbians.  Our protected areas, and we as British Columbians, deserve better.

Photo of Chilliwack Lake Provincial Park from Picture BC.