No Mining Rights Without Consent: A groundswell of support for Gitxaała Nation and mineral tenure reform in BC

On December 15th and 16th, Justice Ross of the BC Supreme Court heard from a wide range of applicants seeking permission to intervene in an important legal challenge launched by the Smgyigyetm Gitxaała and Gitxaała Nation (Gitxaała).

The words of Sm’ooygit Nees Hiwaas (Matthew Hill) were felt throughout the courtroom as he shared a prayer in Sm’algyax to launch the intervenor application hearings – the first time, to our knowledge, that the BC Supreme Court has permitted this. I could feel the charged, anticipatory energy amongst the lawyers and observers.

These two days of hearings took place to allow intervenor applicants to present who they are and why they are seeking to be intervenors in this case. For context, an intervenor is a person or group that is not a party to the case, as Gitxaała and BC are, but is allowed to make arguments that can assist the Court by increasing the comprehensiveness of the resources available to it in making its decision.

The courtroom was overflowing with lawyers as there are eight separate applications to intervene in Gitxaała’s case (and/or a related legal challenge filed by the Ehattesaht First Nation), together accounting for 19 different Indigenous nations, Indigenous organizations, human rights defenders, environmental and community groups, and mineral exploration interests. After listening for two days to the legal arguments from the lawyers in court and hearing from representatives of the intervenor applicants at the related press conference, I was left with an even stronger understanding and feeling of the far-reaching importance of Gitxaała’s litigation.

All the intervenors in this case are applying on a “public interest” basis – arguing that they bring a distinctive and useful perspective on a legal issue of public importance that will be of assistance to the Court – rather than a direct, individual interest in the matter.

Ts’kw’aylaxw First Nation and Nuxalk Nation have made individual applications to intervene, and Gitanyow Hereditary Chiefs and Nak’azdli Whut’en First Nation have applied together. They are each seeking intervenor status as they believe they can provide the Court a unique perspective on the legal issues in the case, arising from their on-the-ground experience with the adverse impacts of the mineral tenure regime.

These adverse impacts are wide-ranging, and affect Indigenous nations and communities across the province. Most importantly, as Gitxaała argues, BC’s current practice of automatically granting mineral rights without notification, consultation or consent from affected nations is inconsistent with both its Constitutional duties to Indigenous nations, and the UN Declaration on the Rights of Indigenous Peoples (UNDRIP) – which BC has committed to implement through the Declaration on the Rights of Indigenous Peoples Act.

In addition, when mineral claims are granted, they can create major barriers for conservation initiatives such as Indigenous protected and conserved areas (IPCAs) because tenure holders must be compensated by the provincial government if they aren’t able to proceed with mining activities.

Speaking to this, Naxginkw (Tara Marsden), representing the Gitanyow Hereditary Chiefs at the press conference stated:

The shell game the mining industry is playing with Indigenous lands and taxpayer dollars needs to be overhauled. In our case, we have been told that in order to protect our critical salmon spawning habitat, government would have to pay the tenure holders between $4 and $7 million in compensation. This regime of compensation is a significant barrier for government, and prevents them from protecting critical areas needed for biodiversity and climate resilience.

While companies go mining for compensation, taxpayers end up footing the bill for costly litigation and resolution of land-based conflicts.

In addition to individual nations, the First Nations Leadership Council (FNLC), consisting of the BC Assembly of First Nations, the First Nations Summit, and the Union of British Columbia Indian Chiefs, is seeking intervenor status. They pointed out to the Court that the FNLC brings an important perspective, having worked closely with the Province to direct and develop the BC Declaration on the Rights of Indigenous Peoples Act (DRIPA) and has been actively engaged in its implementation. They argue that FNLC is well situated to aid the Court in the interpretation of DRIPA and the requirement for all BC laws – including the Mineral Tenure Act – to align with UNDRIP.

The relief sought by Gitxaała, if granted by the Court, would allow Indigenous nations in British Columbia to address [the negative cumulative impacts of BC’s mineral tenure regime] and move forward with our path of sovereignty and self-determination. Unfortunately, the legal representatives from the Province of BC have instructions to oppose the relief sought by Gitxaała Nation. This is a clear example that the Province of BC is trying to have it both ways, by making political commitments to reform the Mineral Tenure Act while fighting reform in the courtroom. In this era of the Declaration on the Rights of Indigenous Peoples Act, this is unacceptable.

On a similar vein, as BC’s Human Rights Commissioner Kasari Govender, shared in her press release:

The Declaration Act and UNDRIP exist to protect the fundamental human rights of Indigenous Peoples. The interpretation of the Declaration Act plays an important role in ongoing decolonization and reconciliation efforts in our province.

She went on to state that,

…the cases brought by Gitxaala and Ehattesaht First Nations against British Columbia will be the first legal tests of B.C.’s Declaration Act. As such, I am applying to intervene to make legal arguments about the importance of the Declaration Act as a human rights statute, as part of my mandate to ensure compliance with international human rights law.

A coalition of non-governmental organizations and community groups is also seeking to intervene in the case. The coalition includes MiningWatch Canada, the BC Mining Law Reform Network, Wildsight, SkeenaWild Conservation Trust, Kamloops Moms for Clean Air, and the Wilderness Committee. They hope to argue that the Court should consider the ways in which the mineral tenure regime negatively impacts many interests and communities – from fee simple land holders to local land use planning, to childrens’ health and conservation of sensitive watersheds – in crafting the remedy it grants. Without the community and environmental perspective, they argue, the Court would be missing an important viewpoint and risk equating the public interest solely with the economic interests of the mining sector.

Of the eight intervenor applications, there is only one that is generally aligned with the arguments that BC is making, and that is a coalition of mining industry associations consisting of the Association for Mineral Exploration British Columbia, the Mining Association of British Columbia, and the Prospectors and Developers Association of Canada. The mining coalition argues that the remedies that Gitxaała is seeking will negatively impact the mining industry.

However, an important counterpoint to the mining coalition’s argument was provided by two mining companies, First Tellurium Corp. and Kingston Geoscience Ltd., which are also applying for intervenor status. According to affidavits filed with the Court, these two companies are committed to obtaining free, prior and informed consent (FPIC) before conducting exploration activities in Indigenous territories, and they argue that BC’s free entry system rewards actors for ‘claim jumping’ using the automatic system over those who seek the consent of Indigenous peoples. Their arguments generally support the remedies Gitxaała is seeking in their case.

First Tellurium is an advocate for the United Nations Declaration on the Rights of Indigenous Peoples…We believe going forward, the UN Declaration’s fundamental proposition of free, prior and informed consent must be at the heart of mineral exploration and mining tenures in British Columbia.

Other intervenors also emphasized that this challenge to BC’s current mineral tenure regime does not mean they are opposed to mining in general – but that going forward, BC’s mining laws must be aligned with its commitments to Indigenous peoples.

As noted by Naxginkw (Tara Marsden) of the Gitanyow Hereditary Chiefs:

Our application to intervene is not about stopping mining, or opposing all mining activities. We currently have multiple consent-based agreements with mining companies that are leading the much-needed change in their industry. These agreements are in places that are not as sensitive in terms of salmon habitat. A better process is possible. The provincial government can, at any time, stand down in this case, concede our evidence and avoid costly litigation that only favours those mining companies that want to see us stay in the colonial era rather than moving into the era of mutual consent.

Gitxaała did not oppose any of the intervenors, however, they did ask for time and page limitations (with the goal of ensuring that the litigation stays on its current timeline and that the scope of the case is not expanded). They also resisted the mining coalition’s request to enter hundreds of pages of additional material – much of it unproven promotional content about the importance of the mining sector – as “evidence” in the case. BC opposed the Court granting intervenor status to the coalition of environmental and community groups.

Justice Ross is set to share his decision early in the new year, which will determine which groups will be allowed to intervene. Gitxaała’s full case is expected to be heard in April 2023, along with a similar case brought forward by Ehattesaht Nation. 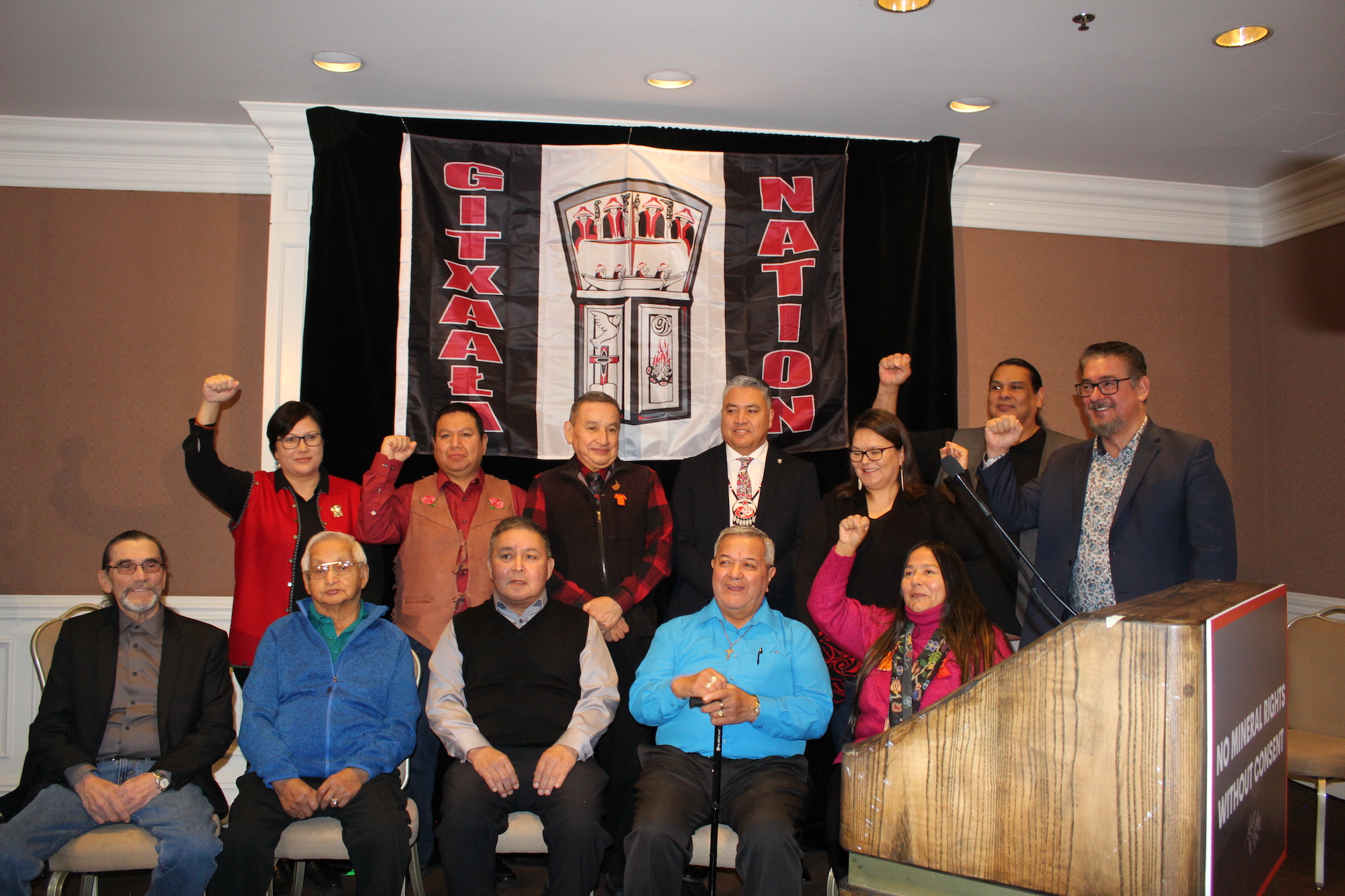