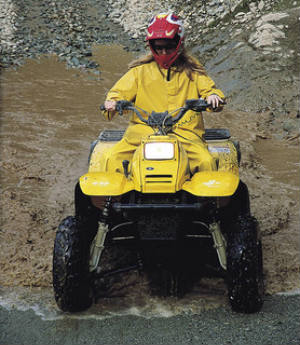 With the BC Legislature’s Spring Session in full swing, there are lots of new, proposed laws to read and comment on, and we’ve been drawing your attention to legislation that we view as problematic (related to Parks and ownership of lake beds, for example), but not all of the news is bad.  We’re happy to see the BC government moving to regulate Off Road Vehicles (ORV) with a new Off Road Vehicle Act (Bill 13) – an initiative that we’ve been supporting for well over a decade and which is long overdue.

When ORVs are used off appropriate roads or trails, they can be very environmentally destructive, especially if the ORVs are used in environmentally sensitive areas.  In 2011 the BC government passed laws banning ORV activities that cause harm to Crown lands, explaining, in an educational pamphlet, that:

Whenever you drive off-road, you are disrupting the ecological foundation of our natural areas. In sensitive sites, the damage can be catastrophic. … Operating vehicles irresponsibly can cause long-term irreparable changes to the structure of the soil, making it difficult for plants to take root and grow. … Off-roading in wetlands kills birds, frogs and salamanders. Damaged wetlands may impact many generations of wildlife due to the lack of plant life and clean water.

However, it remains challenging to enforce these laws, since, until now, ORVs have not been required to be registered or otherwise identify their users or owners.  Bill 13 requires registration of vehicles and gives the government new powers to deal with ORV users who are damaging the environment or otherwise not following the law.

It’s been a long road

Our work on Off Road Vehicles began with a grant from our Environmental Dispute Resolution Fund (EDRF) to groups looking to address the damage caused by inappropriate ORV use, and resulted in a 2001 report, Alternatives for regulation of all terrain vehicles in BC, by Susan Rutherford, on different ways to regulate ORVs.  This report explained:

[T]he need for leadership and regulatory management of off-road motorized recreation has now become urgent. One reason is that snowmobiling, ATV riding and off-road 4x4/SUV driving have all grown in popularity in North America, including in B.C. Commercial tourist operations of snowmobiles and ATVs are now even becoming popular. Newer vehicle technologies are allowing vehicles to venture further into the backcountry than ever before. Superimposed upon these developments is a growing potential for abuse which, unfortunately, can stem from ignorance of the detrimental impacts; or, alternatively, from a macho attitude which is all too often reinforced in our popular culture. …

Ecological damage from motorized recreation is increasingly evident in British Columbia, particularly in the grasslands, wetlands and alpine areas of the province. The damage includes compaction of soil, erosion of soil, spread of noxious weeds, trampling of habitat, increased risk of fire and litter, and changes in ground cover affecting soil temperature and moisture. Other concerns are deep tracks, dust, noise, air pollution, gas and oil spills, and damage to flora. Countless anecdotal reports confirm the damage is happening every day; and even the government’s sources acknowledge the damage is happening.

But with no requirement to licence ORVs or display identification, it was difficult to hold irresponsible ORV users accountable.
West Coast later played a more active role in the discussions about how to regulate ORVs, when Susan Rutherford joined our legal staff and represented the Off Road Vehicles Coalition, which brought together a range of stake-holders to discuss ORV regulation.  In 2005 these discussions resulted in a consensus document signed by a wide range of stakeholders: Solutions for a Sustainable Future: Final Recommendations For Registration, Licensing and Management of Off-Road Vehicles in British Columbia.  This important report made a series of recommendations related to licensing and management of ORVs.

While not all of the ORV Coalition’s recommendations are being implemented in Bill 13, a good many of them are, and the Bill will give the government the power to implement others of them through regulation (for example, declaring some areas off-limits to ORVs, etc.).  In addition, the Bill is one part of a broader ORV Management Framework that the province is developing.  As Scott Benton, Executive Director of the Grasslands Conservation Council (an active member of the ORV Coalition), says in the government’s press release about the Bill:

The requirement for registration is the corner stone for future management and enforcement of ORV activities and theft prevention.  This legislation provides a solid platform to develop comprehensive regulations that will address safety, operator conduct and environmental protection in the future. The Grasslands Conservation Council of BC looks forward to working with the Province and others in developing the accompanying regulations. The Grassland Conservation Council of BC has been working with a coalition of 10 other interests towards improving the management of off road vehicles for over 10 years.

So congratulations to the Off Road Vehicle Coalition on finally seeing this legislation come to the BC Legislature, and thanks to the BC government for taking these first steps towards better management of Off Road Vehicles in the province.

Lands & Forests
Back to top