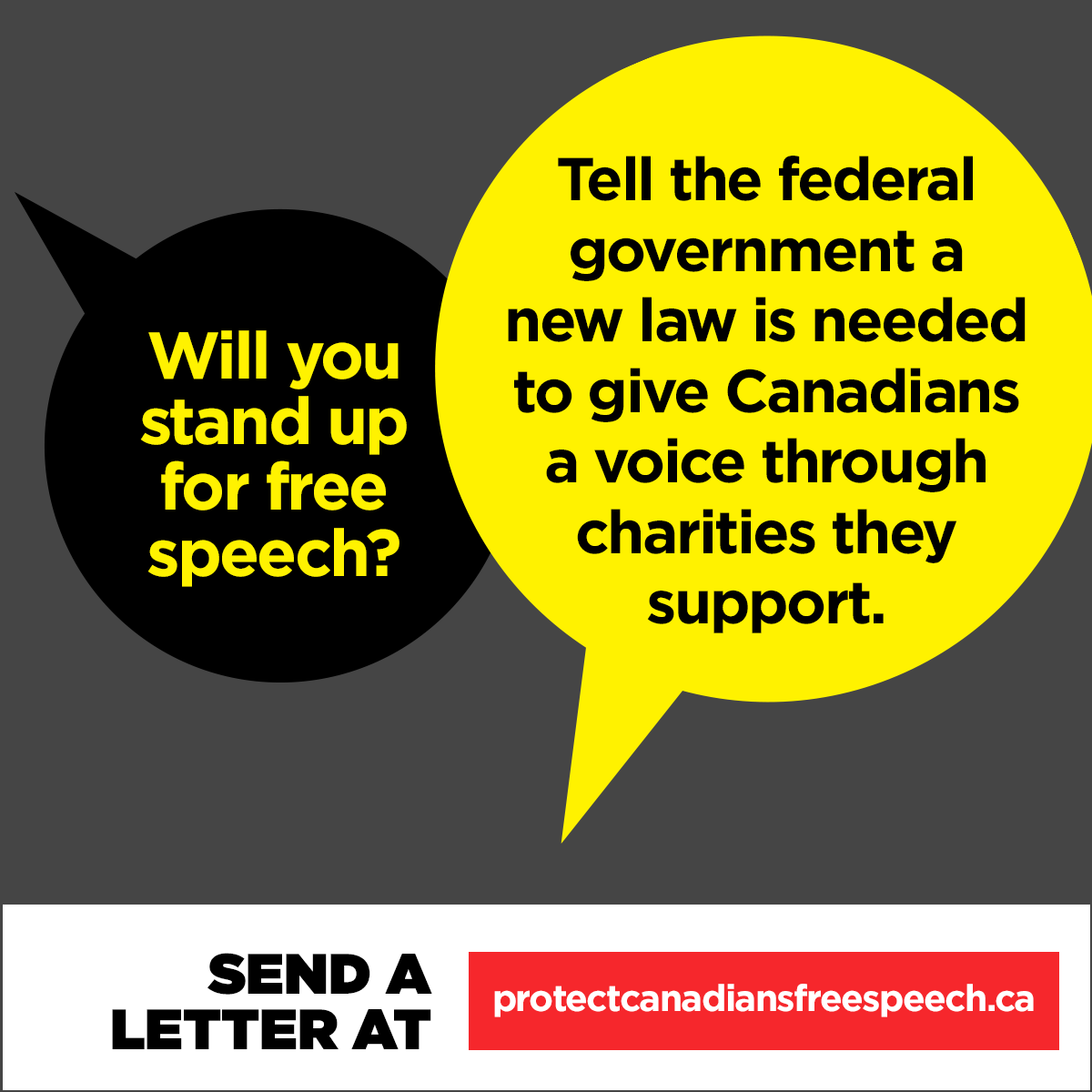 The federal government has recently launched an online consultation on charities’ political activities. They need to hear from you about the problems with Canada’s charitable laws, and about recommendations for reform. You can have your say online until December 14th.

Looking for further background? Individuals and groups interested in ending the political harassment of charities in Canada and fixing our broken charitable laws can access an important new online resource at protectcanadiansfreespeech.ca. You can also check out the submission from the West Coast Environmental Law Research Foundation.

What is the problem?

Several years ago the former federal government launched public attacks against a number of organizations whose views they disagreed with. The organizations were from a wide range of sectors including international development, poverty alleviation and protection of the environment….

Since then, the current federal government has committed to creating a new law and policies that will “allow charities to do their work on behalf of Canadians free from political harassment.” But several antagonistic and costly audits of charities’ political activities that began under the previous government are still underway. Some of these audits have gone on for years and cost hundreds of thousands of dollars, money that could have been spent voicing Canadians’ concerns about key issues.

The audits have had a widespread chilling effect on charities across Canada, inhibiting their invaluable work in the name of the public good. These audits must end immediately. Reform of the rules that allowed these audits must begin. If the laws remain unchanged, federal governments may continue to use ambiguous and arbitrary guidelines to harass and silence voices they don’t agree with.

Why we all lose out when charities are silenced

Supporting the work of a charity is a critical way for individuals to combine our efforts to address challenges facing our society or environment in a way we could not do alone. From laws preventing drunk driving, addressing acid rain, to ending apartheid, charities have a demonstrated track record of achieving changes of societal benefit.

The commonly advanced rationale for limiting charities’ involvement in so-called “political activities” harkens back to tax policy. Because of the tax advantages charities receive, we are told, it is acceptable, and even desirable to limit charities involvement in public debate and public policy development on matters on which there is no societal consensus and thus uncertain societal benefit. This rationale cannot be sustained, however, when one considers the tax advantages afforded to corporations, some of the most powerful economic actors in our society, to advance their views on the same subjects.

From a tax perspective, corporations may deduct unlimited amounts of lobbying and advocacy expenses to advance their private interests, as well as most advertising expenses in Canadian newspapers, television and radio stations. By way of contrast, charities working for the public benefit are limited to using at most 10% of their already more limited resources for “political activities.”

The current Canadian approach to charities’ involvement in public debate and public policy development is antiquated, subjective, arbitrary and confusing – denying Canadians the right to have their voices heard through the charities they support. Legislative reform is essential to ensure Canadians have the right to be heard on public policy issues through the charities they support.

In our submission, a new law should:

Courts in other common law jurisdictions, most notably Australia, have recognized that in a free and democratic society, encouraging open debate on matters of public policy, in which divergent perspectives on the best way to achieve a societal goal may be expressed, is a healthy, desirable, and charitable purpose. Courts in New Zealand have also held that advocacy to change the law can be a charitable purpose. Unfortunately, the Canadian courts have expressly declined to modernize our broken charitable laws, instead  urged legislators to do so.

Worried about the widespread chilling effect of our backwards charitable law on charities across Canada? Want to help level the playing field so that charities can be involved in important public debate?

Please take a moment to send a letter to the Minister of National Revenue letting her know that is time to fix our broken charitable laws, and please consider making a more detailed submission by December 14, 2016.

Letters may be sent by email to: consultation-policy-politique@cra-arc.gc.ca

West Coast Environmental Law is hosting a webinar on November 30th, 2016 on the issues and priorities for reform, and how to participate in the federal government’s review of charity laws. To register for the webinar, click here.