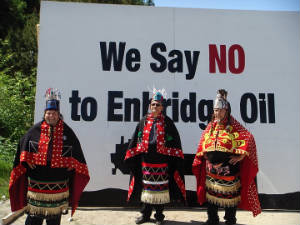 We and our allies have emphasized the many and real environmental risks of the Enbridge Pipelines and Tankers Project, the wall of opposition of First Nations, the lack of social licence among British Columbians.  The National Energy Board Joint Review Panel, in its recent report recommending that the project be allowed to proceed, had to concede, even after downplaying and low-balling those impacts, that there would be a negative impact of the project on BC’s environment.  But the JRP Panel nonetheless argued that what the panel saw as the economic benefits of the project would trump all of these risks and all the public and First Nations opposition.

But the fact is that it is precisely that public and First Nations opposition, and their determination to prevent the environmental impacts, that make the Enbridge proposal an economic dead end.  The JRP Panel report seems to recommend that the project go ahead, but reading the report closely, it’s clear: if we hold the wall, the Enbridge Pipelines and Tankers Project is going nowhere.

The lack of a business case

A pipeline company applying to the National Energy Board for approval for a new pipeline historically needed to demonstrate a compelling business case – that the oil companies that it services want and will pay to ship oil (or in this case diluted bitumen and condensate) through the pipeline.  This is often demonstrated through long-term agreements with oil companies to ship oil through the pipeline (known as Transport Service Agreements or TSAs).

Enbridge tried to get just such commitments through two invitations to the oil and gas industry in 2005 – open seasons in which interested companies were invited to enter into agreements to ship condensate or diluted bitumen through the pipeline.  Enbridge’s press release, and open season package, for the diluted bitumen line both make it clear that agreements were required to demonstrate support to the government’s regulatory process:

The purpose of the Open Season is to confirm shipper support for the line to permit Enbridge to incorporate it into the Gateway Project regulatory application. The Gateway Project remains dependent on achievement of commercial feasibility, including satisfactory shipper commitments, as well as successful completion of engineering, environmental planning, and public and Aboriginal consultation prior to an application for regulatory approval. [Emphasis added]

After the open season was finished, Enbridge reiterated:

Enbridge will work with the shippers who participated in the Open Season to finalize binding precedent agreements and initial pipeline capacity. The regulatory application will be filed following completion of binding agreements for both pipelines, subject to satisfactory completion of the environmental assessment and mitigation plan, and public and aboriginal consultation.

Enbridge was unable to secure TSAs, and had to go to the JRP panel without these firm commitments in place.  Its pipeline-company rival, Kinder Morgan, made much of this fact:

[T]he application is not supported by a successful open season process, nor is the application supported with any level of binding commercial support to demonstrate the need and necessity of the applied-for facilities.  In fact, in late 2005 Northern Gateway held open seasons for both the oil pipeline and condensate pipeline, respectively, and although Northern Gateway received "expressions of interest", this did not result in any binding shipping commitments.  In KMC's view, these shortfalls represent serious deficiencies and do not meet the Board's test for economic feasibility set out in the Alliance Pipeline decision.

Fortunately for Enbridge, the Panel – at least in its report – accepted it’s rather lame excuse that it was too early to have binding agreements in place:

Throughout the Panel's process, Northern Gateway said that its financing plan is preliminary and would remain so until the project is developed further. The development of a specific financing plan would follow regulatory approval, more definitive construction cost preparation, and shippers signing firm transportation service agreements.

However, the panel did not entirely let Enbridge off the hook, and the report’s 209 conditions include two related directly to demonstrating that there is business demand for the pipelines:

Northern Gateway must file with the NEB, within 60 days after executing all TSAs, but not less than 6 months prior to commencing Project construction, the long-term, firm TSAs executed with shippers to demonstrate that it has secured sufficient commercial support for the Project.

In no case can sufficient commercial support for the oil pipeline be constituted by TSAs comprising less than 60 per cent of its nominal capacity (525,000 barrels per day). [Emphasis in original]

There is an essentially identical condition in relation to Enbridge’s plans to build a second pipeline, alongside the oil pipeline, to carry condensate to the oil sands.  In both cases if these agreements are not in place by July 1st, 2014, Enbridge will – if the federal government allows the project to go ahead – need to file periodic updates on its progress with the NEB.

It is worth noting that, if no construction on the pipeline or Kitimat terminal has commenced by December 31st, 2016, then according to condition 2 in the Panel’s report Enbridge’s approval would expire.  In other words, even if the federal government were to issue an approval to Enbridge to construct the project, then before it could begin construction Enbridge would be required to obtain and prove the commercial support that is currently lacking, and if it did not begin construction by the end of 2016 then its approval would expire.

Why is there no business case?

So why did Enbridge’s “open seasons” not deliver the agreements that it wanted to offer to the NEB?  And will they be able to get those agreements now?

Given the projected growth in the oil sands, this might seem like a sure thing but it’s not.  Firms will not want to sign firm shipping agreements unless they feel there is a reasonable possibility the project will be completed on time and on budget.

The fact is that oil and gas companies are well aware of the likelihood of First Nations legal challenges, the province of BC’s opposition to the project, the prospects of mass protests and opposition from BC’s public.  These are far from irrelevant to the business case that Enbridge wants to build, and which the NEB should have been considering.

The strength of this opposition is a major reason for Enbridge’s failure to find shippers for its two pipelines to date.

The Report’s recommendation that the project be approved is no doubt viewed as an important step by Enbridge, but the company knows that the report does not change the prospects of legal challenges, questions about whether BC’s government will issue provincial approvals for the project, and public protests.  And Enbridge’s shippers know that too.