Lost in translation on Burnaby Mountain 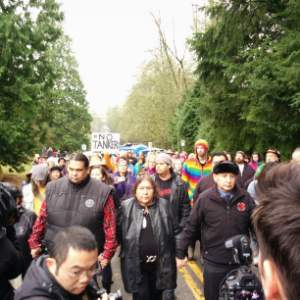 It’s a bit over twenty years since I was arrested, along with 300 other people who stood on the Kennedy Lake Road on August 9th, 1993, in Clayoquot Sound.  So the recent protests on Burnaby Mountain, with over 120 people arrested for protesting Kinder Morgan’s pipeline exploration activities in a regional park, brought back memories.  Although Kinder Morgan decided not to proceed with contempt proceedings  against the Burnaby protesters (after admitting that it provided incorrect GPS co-ordinates when it initially sought the court order they were said to have violated) , I think the lessons I learned about how the courts view and deal with protests will be relevant if we see future civil disobedience against the Enbridge or Kinder Morgan pipelines.

I was not a lawyer at the time – I applied for, and was accepted into, law school while waiting for my trial. But I believed that the laws governing logging in Clayoquot Sound were fundamentally broken, and were wrong. If I wasn’t willing to take a stand up for future generations and sustainable logging – and demand something better – when Clayoquot Sound was at stake, when would I act?

I wrote, in a Globe and Mail Opinion that was published August 20th, 1993:

As I sit down in the bus and wait for it to be filled with my co-arrestees, I wonder why I, a third-year student at the University of Victoria who has never been in trouble with the law before, am being hauled off a logging road and facing charges of criminal contempt.

I know that the practice of civil disobedience, of defying unjust laws, is an ancient and honourable one, practiced by early Christians, suffragettes, the civil-rights movement, the Indian independence movement and others. …

Standing in line waiting to have my mug shot taken, I think of why I and hundreds of others felt that the B.C. government’s decision to permit the Clayoquot logging was so unjust that we had just broken the law to oppose it.

The brave souls up Burnaby Mountain were also acting in the tradition of civil disobedience, as they understand it.  Lynne Quarmby, an SFU professor arrested on November 21st, said:

[A]s an engaged citizen, at the end of the day, when you’re dealing with unjust laws and abusive power, the last resource that we have is something called civil disobedience.  It’s done in full respect of rule of law, but it’s also done as a serious responsibility of being a citizen in this country.  So I’m going to turn around, right now, and I’m going to walk up that hill, and I’m going to be the best citizen I can be.

Unfortunately, as I learned in 1993, the idea that civil disobedience – and especially disobedience of a court order – might represent respect for the rule of law is a concept that the courts find quite difficult to understand.

One law for all

In both the Clayoquot and Kinder Morgan conflicts the protesters were driven by a sense that the law was not being applied in an even-handed way – industrial interests were being protected ahead of community interests.

The Clayoquot Sound protests were the culmination of decades of frustration with the Forest Act, which required – by forcing logging companies to log to maintain a certain level of cut – unsustainable logging, and provided little protection for drinking water, slope stability, biological diversity and other important ecological values.

In the Kinder Morgan case, a feeling that Canada’s laws governing oil pipelines have been gutted and are weighted in favour of Kinder Morgan have combined with a frustration with lack of legal protection for our global atmosphere.  Carrol Linnitt of DeSmog Blog puts it thus:

The mishandling of the National Energy Board review of Kinder Morgan's Trans Mountain oil pipeline and tanker proposal has created the conditions for the situation now unfolding on the mountainside.

And with the continuing loss of faith in these federal reviews -- which even before being refigured to "expedite" energy proposals were already ill-equipped to grapple with the larger societal issues, such as climate change, related to energy proposals -- we can expect to see more controversy across B.C. and likely along the route of TransCanada's Energy East.

Surely there has developed the right of people to a clean environment, to Crown Land not being unnecessarily desecrated, a public say when it’s proposed that that it will – to waters being clean and fish being preserved, neighbourhoods being safeguarded, natural beauty being preserved, clean air, and so on.

Yet none of these things are recognized by the law as things the citizenry can enforce in the courts.

To be clear, it is my opinion that the law does recognize many of these public rights – the right to clean water, clean air, the right to have parks (such as Burnaby Mountain) used for public recreation and conservation, and even the right to a healthy global atmosphere.  I’ve argued that lawyers need to do a better job of raising these rights:

Unfortunately, neither lawyers nor judges have as yet embraced a public rights approach, despite comments from the Supreme Court of Canada on the long history of public rights in respect of the environment (paras 74-82). In addition, there is a lot of uncertainty about whether and how these rights can be raised by members of the general public in the context of civil litigation (due to a legal concept known as standing which suggest that it is the role of the Attorney General to advance these public rights, and members of the general public cannot).

As Ian Mulgrew noted in a recent Vancouver Sun piece, the BC Government has a policy of not charging peaceful protesters under the Criminal Code (for example, criminal “mischief”) or other applicable statutes.  That sounds like a good thing for the protesters, but the practical impact is that a deep-pocketed company may then choose to sue some of the protesters – as that is a pre-requisite to getting an “interim injunction” – a court order requiring the protesters to stop interfering with the company’s legal rights.

That’s what happened in both Clayoquot Sound and on Burnaby Mountain: large multi-national companies sued protesters and then asked the court to issue an injunction against the protesters.

The result is that people engaged in peaceful civil disobedience in BC will usually be arrested and punished for violating a court order granted to industry – not for mischief, trespass, or some other criminal or quasi-criminal offence.

For myself, I didn’t really understand the distinction between being charged under a statute or for violating a court order  – since I recognized that the judge had issued the orders based on the rights given to MacMillan Bloedel under the Forest Act. But to the courts this is a very big difference – since ongoing and flagrant violations of a court’s order are viewed as an attack on the court –deserving of harsher penalties.

As the Supreme Court explained in a leading case, the violation of a court order becomes criminal contempt when it is: “open, continuous and flagrant … without regard for the effect that may have on the respect accorded to edicts of the court.”

Ironically, when I was arrested I viewed my openness – my acknowledgement that I was breaking the law and would accept the consequences – as a positive thing, a key part of what made my actions civil disobedience, rather than just disobedience.  Thus one definition of civil disobedience reads:

A symbolic, non-violent violation of the law, done deliberately in protest against some form of perceived injustice. Mere dissent, protest, or disobedience of the law does not qualify. The act must be nonviolent, open and visible, illegal, performed for the moral purpose of protesting an injustice, and done with the expectation of being punished.

According to the Supreme Court, it is the “open, continuous and flagrant” nature of the contempt that gives rise to an undermining of “the respect accorded to edicts of the court.” But those engaged in civil disobedience, it may in fact be the openness and visibility, along with the expectation of being punished for the disobedience, that actually affirms respect for the courts and the law.

Although the manner of civil disobedient is sometimes defiant, their conduct is more often a manifestation of respect for the law than of contempt for it.  Realizing that the law he breaks applies to him, the civil disobedient violates it knowingly in an effort to correct what he believes to be a wrong infinitely worse than the one he commits, and thereby to improve the system of laws. … In accepting punishment the civil disobedient further demonstrates his respect for the system of laws – a system he seeks to better and strengthen, not subvert or destroy.

Unfortunately, the courts have not always understood this point, and have continued to hang on to the view that it is obvious that open and public disobedience of a court order amounts to an attack on the authority of the courts. Indeed, the courts insist that if a contemnor knew that his or her actions would be public, then “he or she was at least reckless as to whether the authority of the court would be brought into contempt.”

For myself, it had never occurred to me, prior to being arrested, that my openness would be interpreted as a direct attack on the courts.  I was still more bemused to find out that I had been reckless in not appreciating that fact.  Indeed, many years later and with a law degree, I still do not agree with that assertion.

Perhaps what we need, if there is more anti-pipeline/pro-global atmosphere civil disobedience, is a protester-lawyer phrasebook.  It seems here – as it did in Clayoquot Sound many years ago – that the protesters and the courts are speaking different languages.

Part of that involves the lawyers and the protesters making still greater efforts to translate the views of the protesters – including the importance of public rights and the respect inherent in civil disobedience – into legal language.

But I also trust that judges will seek to ensure that the law protects both public and private rights, and will listen when protesters explain why civil disobedience does not undermine respect for the courts.