IPCAs: Places of refuge in times of crisis 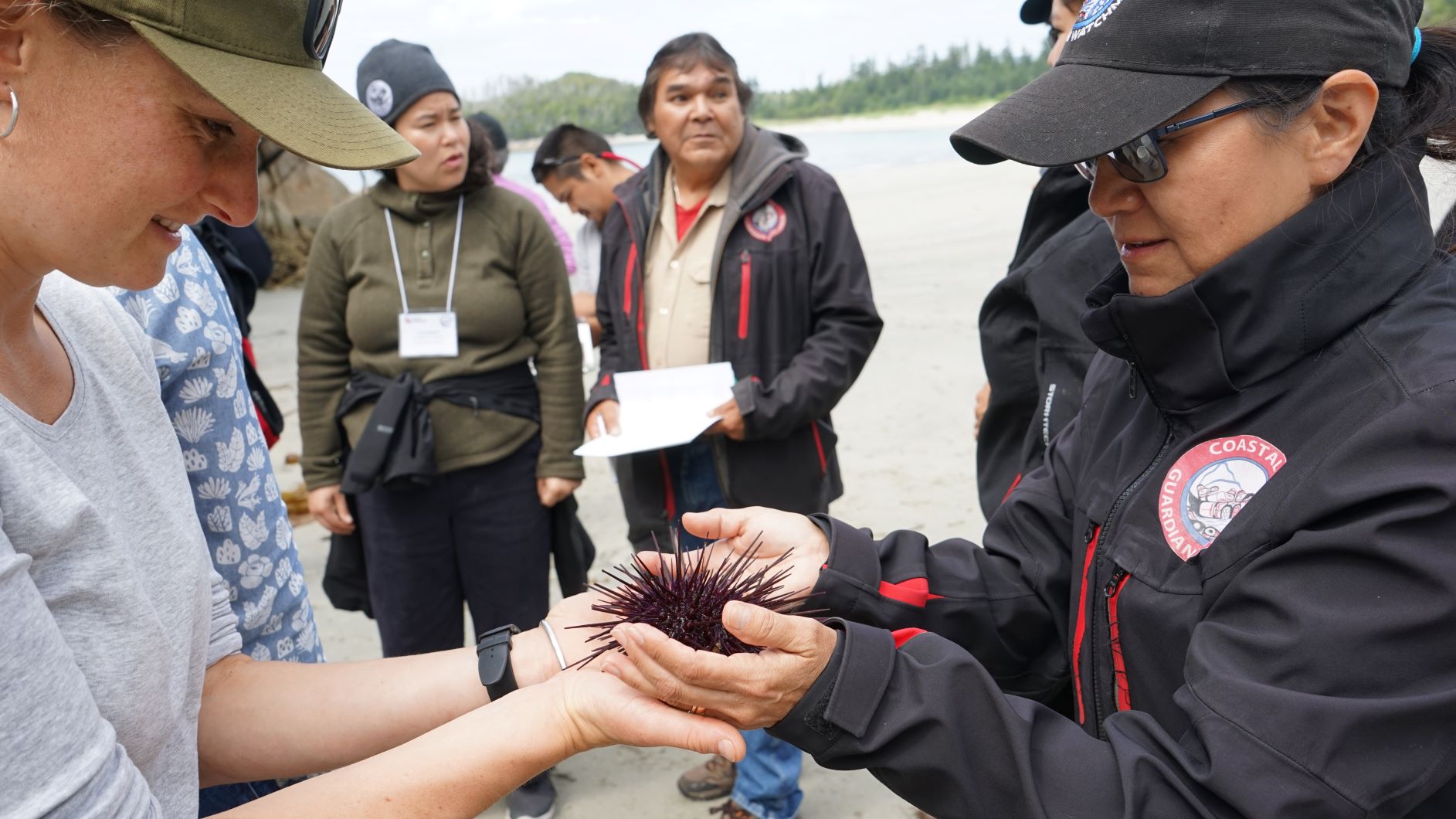 Indigenous Protected and Conserved Areas (IPCAs) – areas protected by Indigenous nations as part of inherent responsibilities to care for their territories – provide places of refuge and healing. This blog explores the growing IPCA movement, why it is more important than ever, and what West Coast Environmental Law is doing to support it.

The COVID-19 epidemic has brought to light a powerful story about a Nuu-chah-nulth woman named Tlaook who, during the time of first contact, took her family to a safe area within the Tla-o-qui-aht territory to hide out from the many imported diseases. Thanks to her courage and resourcefulness, her family survived the diseases and many in the Tla-o-qui-aht Nation alive today are her direct descendants.

As Eli Enns, from the Tla-o-qui-aht Nation, shared in a recent article:

It's not the first time our people have been impacted by diseases that have come from abroad. There is a common understanding that we can return to in times of pandemics, and our elders wanted to ensure that our grandchildren and great-grandchildren always have places to access clean water, clean air, our traditional food systems and places we can quarantine.

That has been a part of any initiative our nation has taken regarding the land — that we need to be sure there is a safe place of refuge.

For many, the COVID-19 epidemic has clarified the importance of these places of refuge where clean water, clean air, healthy food, and supportive, loving communities are in abundance. It has also revealed the fragility of our global capitalist society, which is largely based on the Western worldview that sees humans as separate from and above other forms of life. This worldview sees the natural world as ‘resources’ existing solely for human consumption instead of as a web of interconnected beings that we as humans are dependent on for our survival.

What has become clear is that we cannot continue to abuse Mother Earth without consequence. Planetary health and human health are inseparable. As Robert Grandjambe Jr., a Cree trapper, recently wrote, “The land always has the final say and we are being reminded of that.” 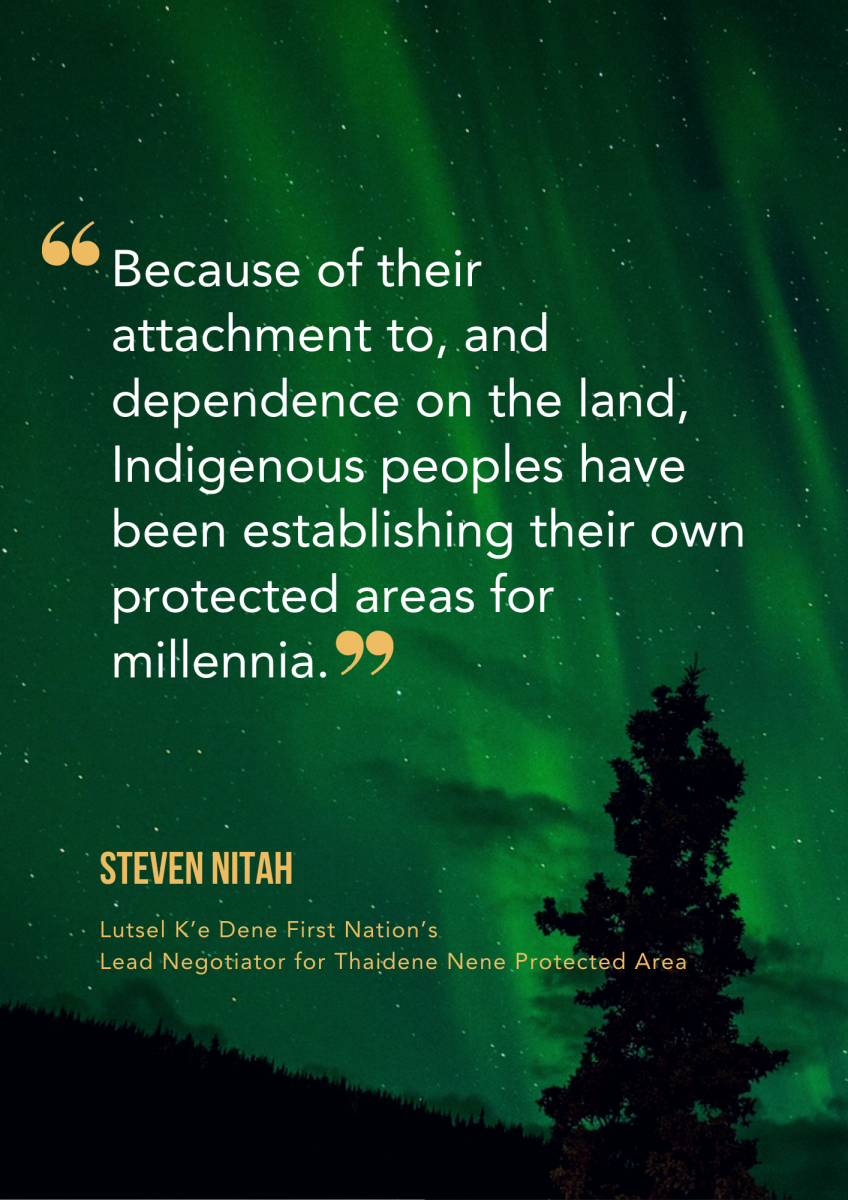 Indigenous Protected and Conserved Areas: A movement that gives me hope

Indigenous-led conservation movements like IPCAs and Indigenous Guardians programs feel more important than ever because they provide space for Indigenous laws and worldviews to re-establish right relationships with each other and the natural world.

Building on the leadership of Indigenous nations such as the Tla-o-qui-aht and Haida, who have established well-known Tribal Parks and Haida Heritage Sites, Indigenous nations across Canada are designating specific parts of their territories as protected areas under their own jurisdiction and using their own laws. IPCAs vary greatly depending on the visions of the Indigenous nations that create them. All IPCAs offer much-needed places of refuge and healing for the natural world including humans.

The Indigenous Circle of Experts report We Rise Together defines Indigenous Protected and Conserved Areas as “lands and waters where Indigenous governments have the primary role in protecting and conserving ecosystems through Indigenous laws, governance and knowledge systems.” 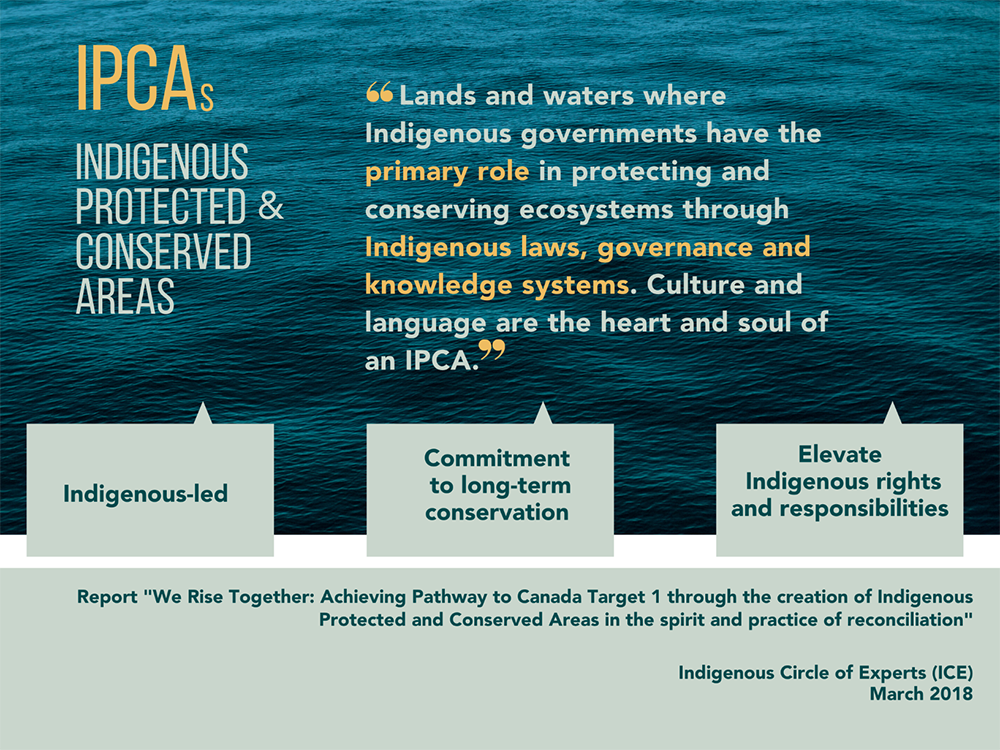 Through our RELAW (Revitalizing Indigenous Law for Land, Air & Water) program, we work with Indigenous nations to support the establishment of IPCAs under their own laws and to ensure they are legally binding under Crown law.

This year, in our RELAW program, we will be working to support several new IPCAs within BC. 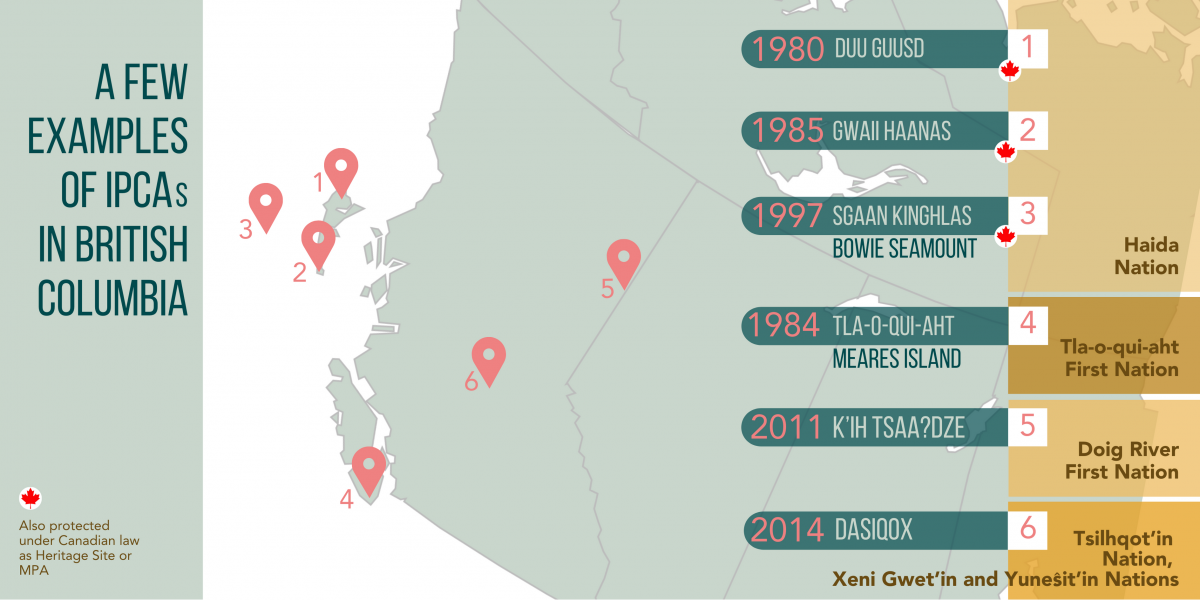 Transforming the law to create clear, consistent and long-lasting support for IPCAs

IPCAs live in a legal grey zone. Indigenous nations can establish IPCAs under their own laws and inherent authority but this doesn’t mean that the Crown will recognize them.

Most Canadian protected area laws are still based on the outdated idea that Crown governments should retain sole decision-making authority over protected areas. Though there are a wide variety of provincial and federal laws to govern both terrestrial and marine parks and protected areas, none of these laws explicitly recognizes IPCAs or the governance authority of Indigenous governments.

IPCAs can also be a way for Indigenous nations to proactively uphold their other constitutionally-protected Aboriginal and treaty rights (for example, rights to hunt, fish or trap). The establishment and governance of IPCAs are also supported by a number of articles in the United Nations Declaration on the Rights of Indigenous Peoples that was recently adopted into legislation by the BC government. 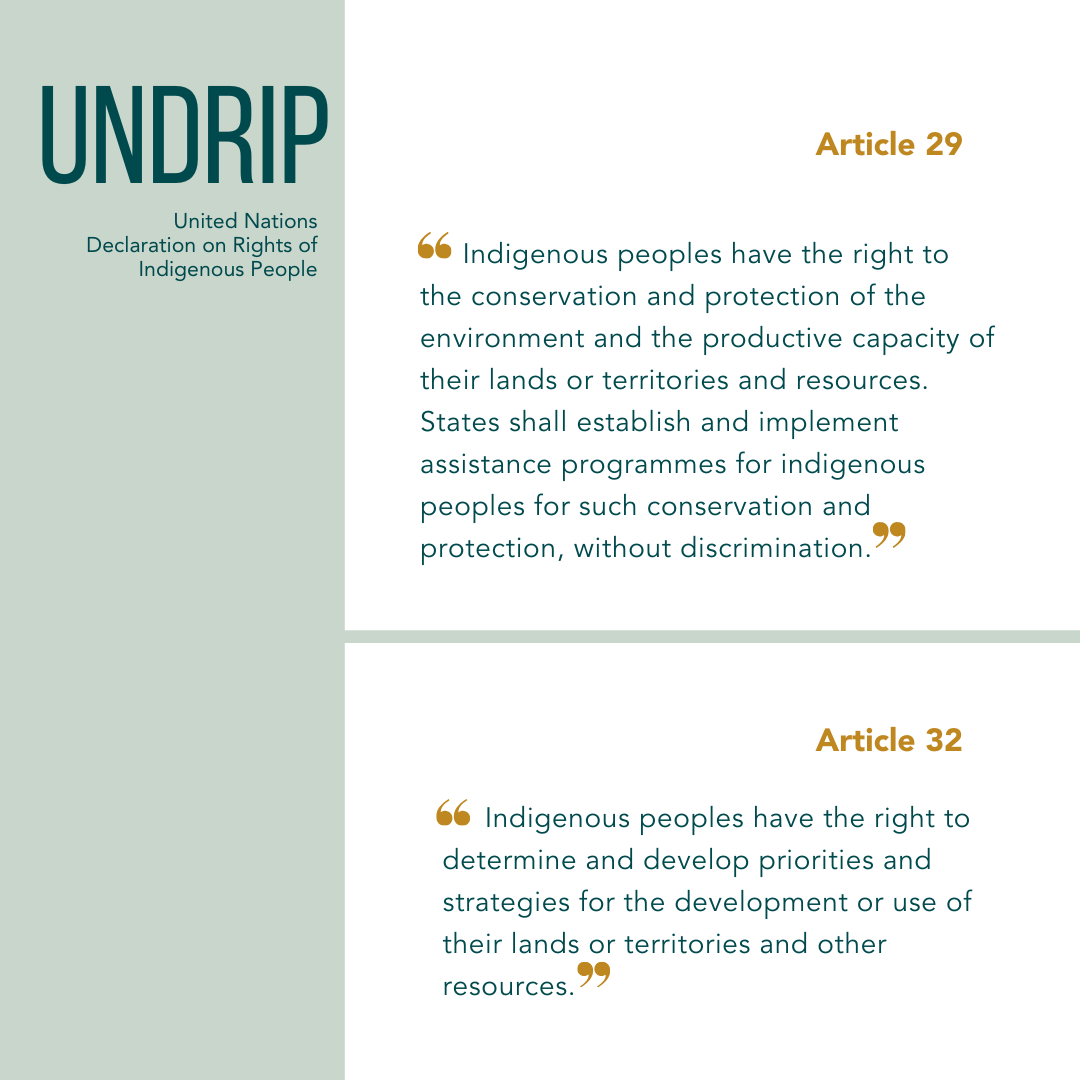 The legal uncertainty creates challenges when establishing new IPCAs because the available tools in Canadian law do not explicitly recognize IPCAs or inherent Indigenous governance authority. We are working with partners to transform Canadian laws so there are better tools to support and recognize IPCAs.

Many Indigenous nations are interested in co-governing IPCAs with the Crown if Crown governments are committed to meaningfully sharing decision-making authority. We support models of co-governance where Crown and Indigenous governments make decisions together based on both Indigenous and Crown law.

Supporting Indigenous Guardians as the eyes and ears on the ground

As Doug Neasloss, Stewardship Director of the Kitasoo/Xai’xais First Nation, says: “Lines on the map don’t protect places, people do.” This quote highlights why establishing new protected areas is pointless unless there are people on the ground to properly care for them through ongoing monitoring and enforcement.

Indigenous nations across Canada have stepped up to establish Indigenous Guardian programs as the ‘eyes and ears’ on the ground within IPCAs and beyond. These Guardian programs deliver promising numbers by way of social, cultural and economic returns and are growing alongside the IPCA movement.

We offer legal support to Guardians programs to understand the legal ramifications of monitoring and enforcement of both Canadian and Indigenous laws. For more information, see Indigenous Guardians Toolkit.

People are increasingly questioning the worldviews that brought us into our current interconnected ecological, climate, and health crises. There is a growing sense that we are being presented with an opportunity to transform the foundations of global society to become more just, equitable, and respectful of our rightful place within the natural world. IPCAs are one of many ways we can support this shift and imagine a future where places of refuge are abundant and accessible to all.