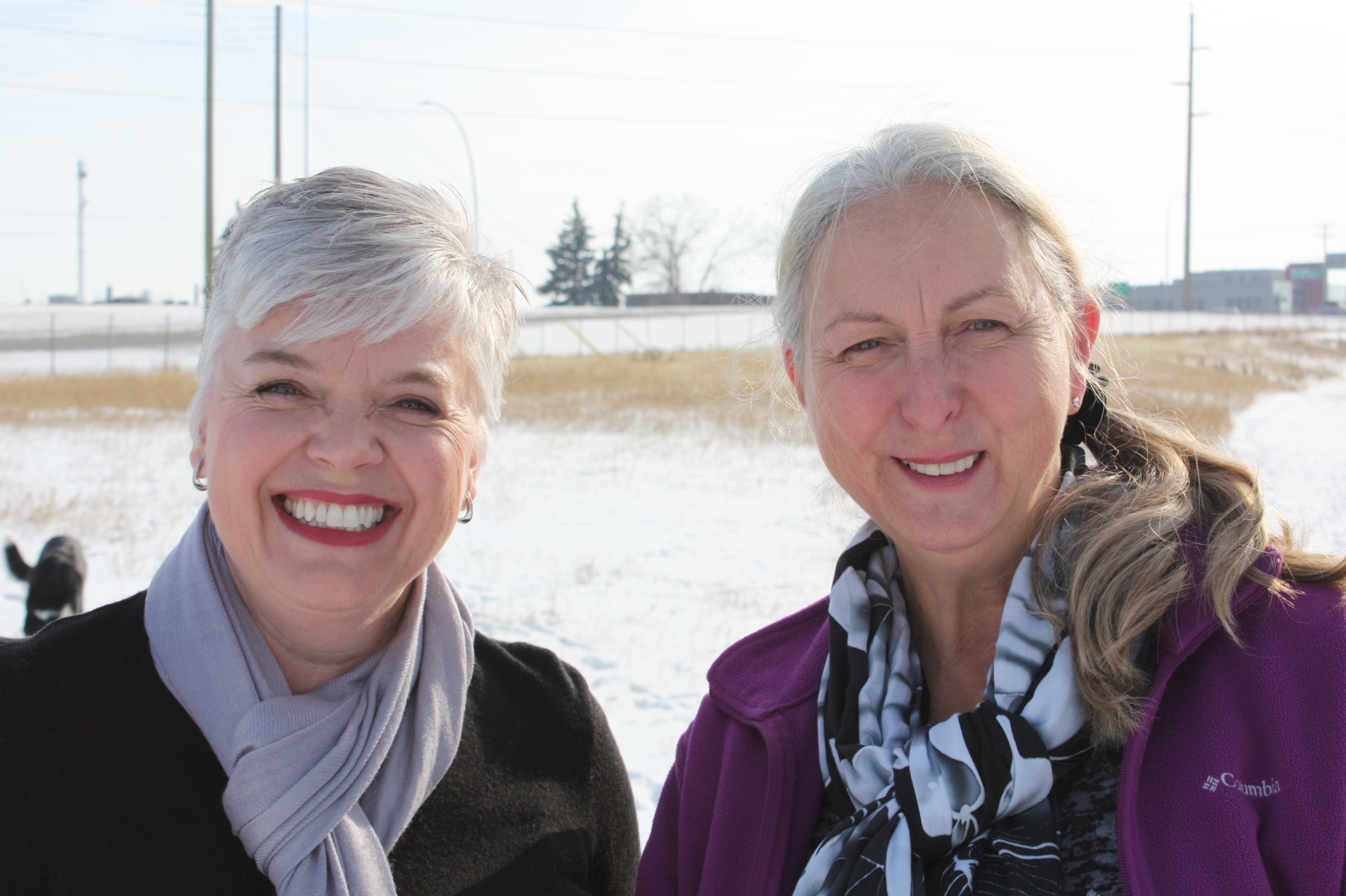 Meet Christine McLean and Judith Pringle – two women from Calgary who first discovered Quesnel Lake two years before the disaster. Quesnel Lake is a stunning glacial fjord at the top of the watershed that feeds the Fraser River. Christine and her partner Eric bought a home at Mitchell Bay, one of the handful of small communities circling the lakeshore. The lake was to be a wilderness home away from home, a respite from their busy working lives.

Judith remembers her first trip to Mitchell Bay in 2013 to visit Christine and Eric as a transformative experience for her daughter. She explains, “My daughter has always grown up in Calgary. When we were at Mitchell Bay, I saw what no wifi and a small community did for her. She learned to catch and cook her own fish, learned much more about the environment and just how wonderful and special Quesnel Lake is.”

While Judith and her daughter were packing for their vacation to Mitchell Bay in August 2014, they got the phone call from Christine. “I never heard them so devastated,” Judith recalls.

Christine and Eric had been expecting a big group of friends and family at their vacation home. “They were all due to arrive the next day, and we had to turn them away because there was no drinking water,” says Christine. “I thought to myself, what would they do without access to the water anyway? We just sat there and watched the environmental disaster unfold.”

“There was a sense of injustice”

Christine went to the community meetings convened by the mining company. She still remembers what she thought of the dynamic: “the Ministry people sat with the mine people at the first meeting. It was so apparent that the Ministry was working with the mine, and we had nobody.”

A Facebook page had been set up, but Christine recalls, “For a year, it felt like nothing was being done, no one was rallying the troops. I complained a lot about this to Judith. Quesnel Lake is very splintered – little communities miles away from each other. Not everybody has wifi, and many are seasonal residents.”

And then in the spring of 2015, the company announced that it was turning Hazeltine Creek into a discharge channel for a new water treatment plant, which would clean only the minimum amount of metals out of the water. Judith, a research nurse with a career’s worth of experience assessing clinical reports, got to work analyzing the mine’s plans for the water treatment plant. Her trained eye quickly discerned that on numerous occasions, the mine wastewater was not being remediated to safe levels.

“There was a sense of injustice," says Judith. “Christine has a financial background, and she would always say to me, this doesn’t balance out.”

“We started writing letters to the Ministry of Environment. The MOE responded – it wasn’t what we wanted to hear but it was encouraging, it felt like we could be heard,” Christine explains.

It turned out that the Ministry of Environment had approved permits allowing the Mount Polley mine to discharge wastewater into Quesnel Lake, bypassing the wastewater treatment plant, and lakeshore residents weren’t informed about it. Once the wastewater discharge had begun, the lack of monitoring in the area raised serious concerns. Though Mitchell Bay is only a few kilometres from the mine tailings outfall at Hazeltine Creek, the mining company was only taking water quality samples there a couple of times a year.

Christine says, “Every time the mine did something, we started to write the Ministry and copy the mine. We compiled a list of all the political people and government staff. We copied everyone on the letters.”

Building a strategy and gathering support

After a few months of letter writing, Christine and Judith decided it was time to step up their efforts by appealing the mine’s waste discharge permit.

“We researched how to appeal an environmental permit approval. I looked online and saw that it cost only $25, that we could just go ahead and do it. We wrote it ourselves, and filed it, and it was accepted. We were astonished,” says Judith.

But getting a hearing date with the Environmental Appeal Board (EAB) wasn’t enough. As relative newcomers to this type of activism, the women knew they needed to get to know their community better and find more support.

Judith did some research on how many people are needed to launch a petition with the government, and they set a goal of organizing 25 people around the lake. Spreadsheet in hand, Christine knocked on her neighbour’s door and told him what they were doing, showing him the water quality testing data that she and Judith had compiled. It was a good conversation. Her neighbour – a long-time resident and very well known on the lake – mobilized other lake residents. He even gave the emerging group a name: the Concerned Citizens of Quesnel Lake.

“We now have 45-50 regular people who sign the letters that we send to the government. If I had more time, I’d do more reaching out. Some people just can’t get out and support us publicly; they might have people in their close networks that work for the mine. The mine is a huge presence in our community,” explains Christine.

Meanwhile, Christine and Judith started to build a legal strategy. Christine had seen an article in the Calgary Herald about a successful private prosecution of a jet fuel spill into Lemon Creek, supported by West Coast Environmental Law’s Environmental Dispute Resolution Fund (EDRF). Through the EDRF, we provided Christine with funding to retain a private lawyer to assist with their EAB appeal, and encouraged her to get in touch with a broader coalition of organizations working on issues of mining accountability and legal reform.

Some of the people they reached out to at first were not very supportive, but they persevered and found good allies. Christine began to connect with the Fair Mining Collaborative, MiningWatch Canada, and First Nations Women Advocating for Responsible Mining (FNWARM). “We’ve been in touch with the Fraser River group, the Kamloops group around Ajax Mine, and Amnesty International. The coalition was born,” she says.

“Our campaign has been mainly attending meetings, collating information, writing letters and asking for answers,” says Judith. “When the mine says ‘We’re treating everything,’ we have the data to say, ‘No, actually you’re not.’ We want to deliver accurate information, showcase why Quesnel Lake is a special place.” When the mine was trying to get the discharge permit approved, we designed a billboard and put it on Highway 97 outside of Williams Lake. The weekend that the permit was approved, we got a spike of 500 visits to our website. It made a huge difference,” says Judith. 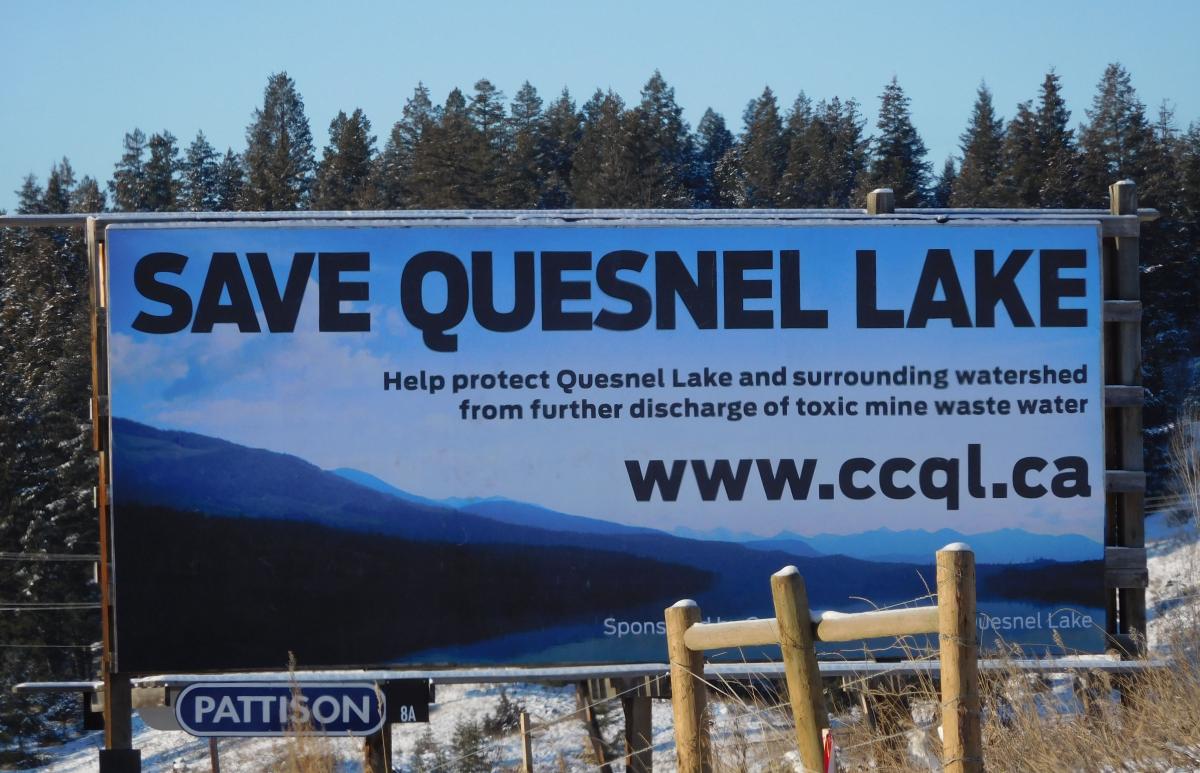 In May 2016, the BC Auditor General’s report on the mining sector was released. The report reviewed the Ministry of Energy and Mines’ performance as the regulator for the Mount Polley Mine and concluded that the “compliance and enforcement activities of the mining sector are inadequate to protect the province from significant environmental risks.”

“The report made sense to us,” recalls Christine. “We started to get ramped up.”

“Both of us work full time and do this when we can. I live most of the time in Calgary, and the irony is that when I’m at Quesnel Lake I don’t want to be writing to the government, I want to be fishing and hiking and playing with my grandkids,” she says.

Judith agrees: “Researching and organizing takes a lot of time. The amount of trolling on websites, the amount of work it takes to get data, and to understand the data can be frustrating. We’ve had to limit it at times. Once when we took 4-5 weeks off from the campaign, we got feedback from the lake residents!”

For Christine and Judith, all this effort is worthwhile, because they understand how important it is for citizens to speak up about matters that affect the health of their environment and communities.

“There wasn’t anybody doing anything about the Mount Polley disaster,” Christine explains. “At the end of the day, the important thing for me is that somebody does something. If we do the best we can to stop the discharge going into the lake, or force the mine to clean the water going into the lake, I can say to my grandkids that we did everything we could.”

“We have remained professional under the most difficult circumstances. That’s why we’ve lasted as long as we have,” says Judith. “I’m proud that we’ve set a good example of what’s possible for my daughter.”