How should we slap back at SLAPPs? | West Coast Environmental Law

News & Events » Environmental Law Alert Blog » How should we slap back at SLAPPs?
Back to top

How should we slap back at SLAPPs? 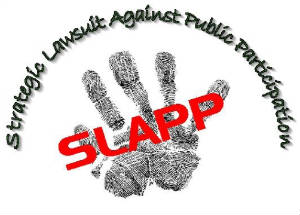 We were alarmed to hear that Taseko Mines Ltd., the company that wants to develop the controversial Prosperity Mine, is suing the Wilderness Committee and one of its employees.  This is a disturbing reminder that the law is sometimes stacked against individuals and groups concerned about the protection of the environment, and that big business can wield a big legal stick.

This development comes hot on the heels of another David vs. Goliath lawsuit.  The trial of anti-fish farm activist, Dan Staniford, sued by Mainstream Canada for allegedly defamatory statements against Norwegian-owned fish farming companies, has only just wrapped up (no decision from the court as yet).  West Coast Environmental Law provided Mr. Staniford with EDRF Grants totaling about $25,000 towards the cost of his defense.

West Coast Environmental Law has long been concerned about lawsuits by large corporations to silence their critics.  Our Anti-SLAPP Handbook explains why:

SLAPPs [or Strategic Lawsuits Against Public Participation] are often threatened or filed with the intent of silencing participation and stifling public debate. SLAPPs function by harassing and intimidating individuals, in essence creating a “chill” in public participation. Defending a SLAPP involves a substantial drain of resources (namely money, energy and time) even if victory on the legal front is assured. The end result is that the suit may not be successful in court, but it has served to delay, silence and harass protestors. Whole communities can often become silenced out of fear of being dragged into a lawsuit.

Since some definitions of SLAPPs suggest that they have no legal merit, let me clarify that I am expressing no view on the legal merits of either Taseko’s (vs Wilderness Committee) or Mainstream’s (vs Staniford) defamation claims.  But I do believe that these defamation suits have many of the characteristics of SLAPP suits, including that they are being brought primarily to silence criticism of the company, and only secondarily, if at all, because of any reputational damage.

Defamation law – the right to sue for harm to one’s reputation –as it is currently understood, creates an uneven playing field in relation to public policy, and is particularly effective at silencing critics.

A company can say anything it likes about its mines, pipelines or fish farms, whether it is true or not (for instance, they can say that there is no harm being done to the environment), as long as it furthers the interests of their shareholders.  Any untruths that they utter about their projects don’t negatively affect any individual’s reputation; but concerned citizens who dare to criticize the very same projects need to be careful (for instance, saying that a project is causing harm to the environment) – because mistakes or untruths about the project could be taken to harm the reputation of the company, and give rise to a defamation claim.

In addition, defamation is a technical and complicated area of the law, and lawyers who practice in this specialized area are very expensive – giving a big advantage to well-moneyed parties.

In the 1990s West Coast was a strong advocate of Anti-SLAPP legislation, and were delighted to see such legislation enacted in 2001, only to be repealed by a new provincial government later that same year.   We much more recently called for similar legislation which would protect the public from the chilling effect of litigation.

But David Sutherland, Don Staniford’s lawyer and a very experienced defamation lawyer, thinks anti-SLAPP legislation is needlessly complicated, and that a single amendment could shut down many SLAPPs before they start.  On learning of the Wilderness Committee case, he wrote to us:

I am thinking that a concerted effort is now needed toward a legislative amendment to the Libel and Slander Act as follows:

Effective March 2nd 2012 in respect of all publications after that date, Corporations, Societies, trade unions, charities and all other persons that are not natural human beings be and hereby are deprived of recourse to the causes of action in libel or slander and can sue for damage to reputation in the tort of injurious falsehood only.

Don't think that Anti-Slapp legislation works as well as foregoing.

While an Anti-SLAPP law would give courts increased powers to determine whether a lawsuit is a SLAPP and to dismiss such lawsuits, David argues that the government should simply take away the power of corporations to sue critics in defamation.  In essence this view says that while real people have a right to have their reputation protected, corporate entities – whether corporations, unions, non-profits, etc. – should not.

BC’s Courts have already restricted the right of municipal corporations to sue to defend their reputation, starting with the 2009 case of BC Civil Liberties Association v. the City of Powell River.  The BCCLA and its President, who is a resident of Powell River, took the unusual step of suing the City after it threatened to sue critics of the City’s plans to borrow funds to pay for the expansion of a local marina.  The BCCLA argued (on constitutional grounds which would not apply to a private corporation) that a municipal corporation cannot sue to defend its reputation.  Madame Justice Garson of the BC Supreme Court agreed:

It is antithetical to the notion of freedom of speech and a citizen's rights to criticize his or her government concerning its governing functions, that such criticism should be chilled by the threat of a suit in defamation.

This decision has since resulted in the settlement of another SLAPP-like suit brought by the Union Bay Improvement District against a critic of the District’s handling of a local development and blogger, Mary Reynolds.

David’s suggestion that corporations should not be allowed to sue in defamation is actually very similar to changes to Australia’s defamation laws, enacted in 2006, that prevented corporations with more than 10 employees from suing in defamation.  Such a ban would shut lawsuits based on defamation before they were even launched, and might be an effective tool in protecting public debate.

The limits of limiting defamation claims

Although David’s proposal is interesting, it may not remove the need for Anti-SLAPP legislation because many SLAPPs have in fact been brought by developers or municipal councilors as individuals, and not just through their respective corporations.  While David’s proposal would probably address suits by very large corporations, like Taseko or Mainstream Canada, where individual reputations are often not directly involved, we could still see some fairly unbalanced lawsuits.

In addition, there are SLAPP suits that do not allege defamation, relying instead on other legal claims such as conspiracy or interference with contractual relations.  Presumably if David’s amendment to the Libel and Slander Act were passed, some corporations would still find ways to sue: indeed, a review of the changes to Australia’s defamation laws in 2011 found that although the changes had protected public speech, the convoluted legal claims which large corporations ended up bringing instead was an unanticipated consequence of the changes.

There are also legitimate questions to be asked about how to strike a balance between the interest of businesses in not having their brand unfairly tarnished, and the freedom of speech of their critics.  Indeed in the Anti-SLAPP Handbook we wrote that: “[t]here are good public policy reasons why corporations have legal recourse against people who have no regard for the truth and wish to slander them.”

West Coast has recent first-hand experience with the sting of defamatory statements, in the form of advertisements and statements directed against us by Ethical Oil, Ezra Levant and others alleging that we are somehow inappropriately influenced by grants from our funders.  We have no current plans to launch a defamation suit against such deep pocketed defendants (illustrating again the lack of balance on the playing field), and fortunately their attacks have arguably enhanced our reputation among many people, reinforcing to British Columbians that an organization that is closely tied to the oil and gas industry views us as among the most effective of the organisations concerned about the Enbridge pipeline and tanker proposal in northern BC.

But the fact remains that a charity’s reputation is crucial to its ability to raise funds and to achieve its goals.  Similarly, we do recognize that a corporation’s brand (which is not quite the same thing as a reputation, perhaps) is extremely important to its ability to find investors, partners and customers.

David’s proposal wouldn’t leave corporations entirely without a claim in response to outrageous statements: they could still bring a legal claim for injurious falsehood.  This type of claim is more limited than a claim in defamation, but it does mean that if at some point a member of the public crosses a line and causes actual damage (other than reputational damage) to a Corporation, the Corporation would have recourse.

We’d like to know what you think.  Anti-SLAPP legislation might allow courts to deal with a wider range of litigation intended to silent critics, but changing the law of defamation might prevent SLAPPs from getting off the ground in the first place.  Should amendments to defamation law be included in a broader Anti-SLAPP statute, or would it be easier to pass as stand-alone amendments?  Does David’s proposed amendment strike the right balance between freedom of speech and corporate brand?  Let us know your thoughts in the comment section below.