Help for local governments on the frontlines of a changing climate 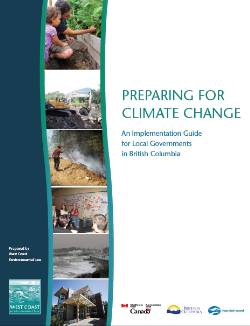 Because most of us live in the built environment of cities, we sometimes forget that we are connected to ecosystems, and affected by changes in the natural environment. Seeing news coverage of the damage caused by Hurricane Sandy to New York City and other communities in its path is a sobering reminder of our vulnerability.

What’s more, climate scientists tell us that a warming planet and a changing climate mean that extreme weather events like this recent hurricane are likely to become both more frequent and more severe as the 21st century continues. In BC, projected climate change impacts also include rising sea levels, invasive species, increased freeze-thaw cycles, seasonal water shortages and greater risks of both forest fires and flooding.

Local governments in BC are on the frontlines of these impacts. They need to become engaged in climate change adaptation – defined by the Intergovernmental Panel on Climate Change as an adjustment in response to actual or expected climate change, which moderates harm or exploits beneficial opportunities – in order to protect themselves from potentially devastating impacts. These impacts may be associated with single events such as storms, or with longer term, incremental changes like sea level rise.

To assist, West Coast Environmental Law has released a new resource, Preparing for Climate Change: An Implementation Guide for Local Governments in BC. This guide looks at how local governments can use available legal and planning tools to support climate change adaptation strategies and goals.

Local geography, patterns of development, primary economic activities and other circumstances will determine how impacts are felt in different communities. Despite this diversity, most local governments have similar responsibilities for infrastructure, land-use planning, and emergency response planning and delivery, and this new guide provides many examples of adaptation measures that have already been undertaken by local governments in BC that may be useful for other communities.

Some key findings from our work on climate change adaptation at the local level include:

While action to adapt to climate change is not a substitute for reducing our climate impact, the amount of greenhouse gas emissions that we have already sent into the atmosphere has committed us to a certain and significant level of climate change. Looking ahead and preparing for climate change will allow us to save costs and build resilient communities.

Download: Preparing for Climate Change: An Implementation Guide for Local Governments in BC.

This resource was developed as a project of the British Columbia Regional Adaptation Collaborative, with funding from NRCAN, the BC Ministry of Community, Sport and Cultural Development and the Fraser Basin Council.

Climate and Energy
Green Communities
Back to top