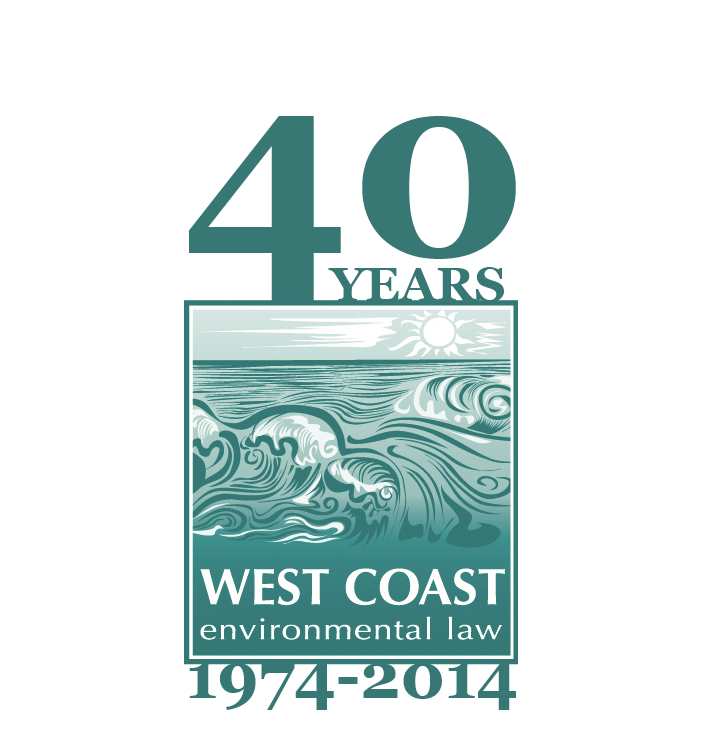 This year, West Coast Environmental Law is proud to celebrate our 40th anniversary and the many accomplishments the organization has achieved over the past four decades.

West Coast first opened its doors in 1974 as the Vancouver Environmental Law Centre, a summer clinic set up by a group of UBC law students dubbed “legal eco-guerrillas” by the Vancouver Province at the time. Since then, West Coast lawyers, staff and directors have worked tirelessly to ensure access to justice on environmental matters, assisting citizens, communities and First Nations on virtually every environmental issue imaginable, and played a hand in shaping many of Canada and BC’s most significant environmental laws. Looking back, many of our greatest accomplishments were achieved outside the spotlight, by providing legal and strategic support to enable client and coalition efforts, or in negotiations with government.  Our 40th anniversary has thus been an interesting opportunity to shine the light on West Coast’s impact over the years.

For forty days this fall, we profiled some of the highlights of our work.

Milestones that pop out?  1981, when our advocacy contributed to the creation of BC’s Environmental Appeal Board. And in 1994, when following a two year-long campaign by West Coast the BC government passed the Land Title Amendment Act enabling conservation covenants on private lands, and resulting in protection of hundreds of environmentally important sites forever. From 1999-2005, we were also one of the principal drafters of the Forest Stewardship Council “good wood” certification standards for BC, which verify that wood products come from forests that are managed in an ecologically and socially responsible manner.

Access to environmental justice has also formed a crucial component of our work over the past four decades. In 1989, we launched our Environmental Dispute Resolution Fund, which provides grants to British Columbians facing environmental issues in their communities to obtain legal support. Over the past 25 years, the EDRF has given over $5 million to help citizens and groups access environmental justice on more than 650 different issues. Among many highlights, in 1992, for example, the EDRF provided financial support to Friends of the Oldman River in a case that resulted in a Supreme Court of Canada ruling that provides the legal basis for Canada’s environmental assessment laws.

We were a part of the delegation that negotiated the Kyoto Protocol, participated in a task force and consultation process that shaped the 1988 Canadian Environmental Protection Act, and helped bring in amendments to the BC Park Act that enabled legal protection of key areas of the Great Bear Rainforest through a new “Conservancy” designation. The list goes on.

Our achievements would not be possible without the support of our supporters, volunteers, community partners and allies. To help celebrate our 40 years of protecting BC’s environment through law, but more importantly to recognize the multitude of individuals and groups who help make our work happen, this month we hosted a 40th Anniversary event to showcase our work, thank our supporters and present this year’s Andrew Thompson Award.

Our wholehearted thanks to everyone who attended, as well as those unable to make it, for helping West Coast Environmental Law advocate for a secure, healthy environment for British Columbians. May the next 40 years be as rewarding as the last.