Finding the right recipe for life in the floodplain 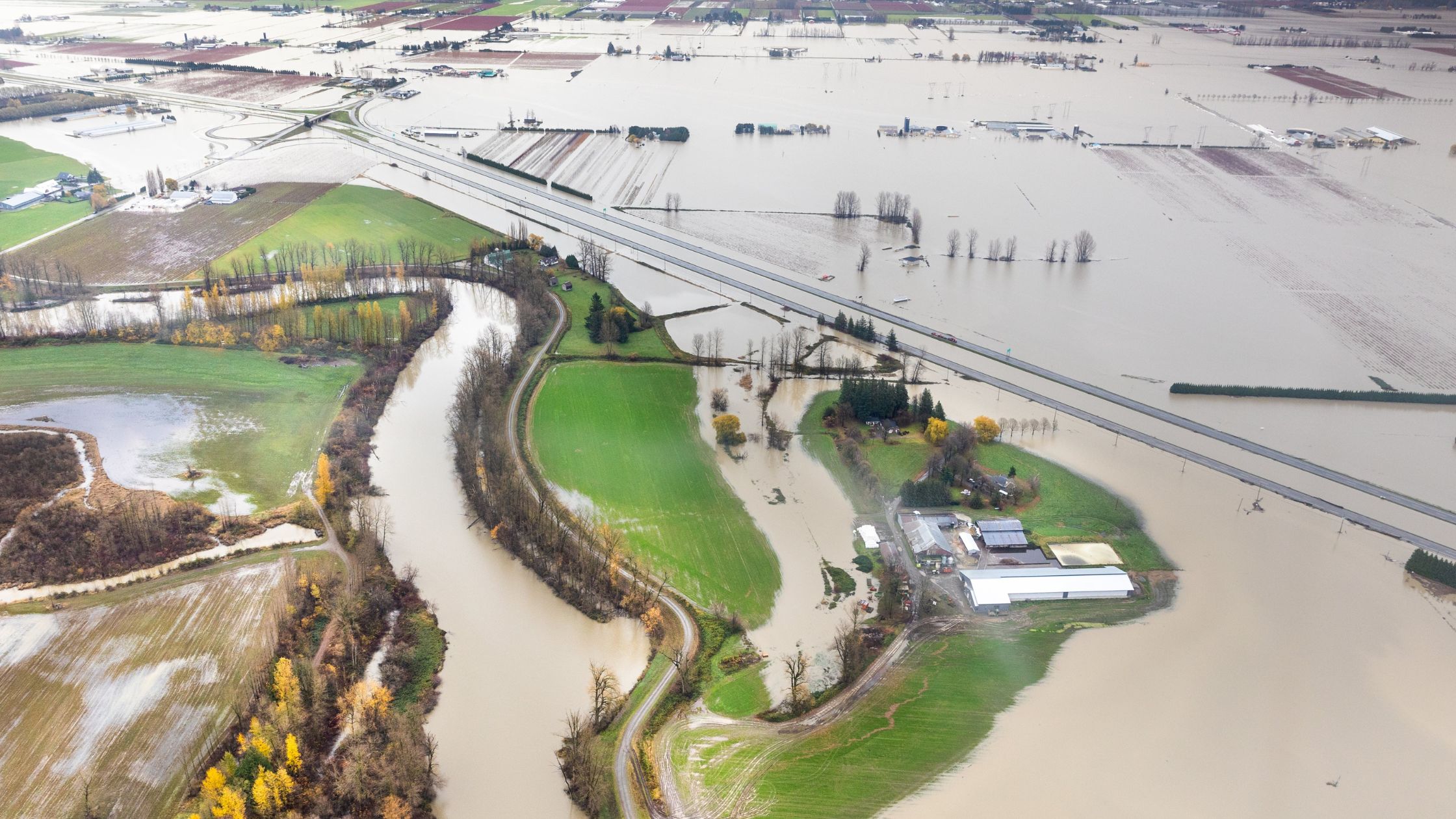 One year on from the November 2021 flood events in BC, it’s clear as we look towards the future there are no easy answers for the Lower Fraser River floodplain and the communities who live there.

In some cases, people are still dealing with the basics of recovery – getting back to their homes, making insurance claims for losses, returning to “normal.” We haven’t heard directly from other species, but likely they are also still feeling the after-effects of the sudden return of waters to the floodplain, bringing with them many contaminants from human activities, and sending fish into challenging locations, like farmers’ fields.

The federal government has pledged billions of dollars for recovery, to be distributed by the BC government. But to date there has been little transparency about how that money will be spent. Still, the promise of a significant investment in the region brings hope for transformative change.

Together with a number of like-minded organizations, West Coast Environmental Law has been supporting dialogue around a new, principled and strategic way of building resilience for people and other species in the Lower Fraser floodplain, focusing on Indigenous-led and nature-based approaches. It’s being called Build Back Better, Together.

Before we talk about the dialogue that has taken place this year, it is important to be as clear as we can about how we got where we are today. How did communities and infrastructure in the Lower Fraser end up being so vulnerable to the atmospheric rivers of 2021? Below we chronicle just some of the actions that set the stage for the 2021 floods in the Lower Fraser floodplain.

1) In the 1850s and 1860s, the colony of British Columbia carried out an illegal and illegitimate dispossession of the Indigenous peoples of the Lower Fraser from their territories, and confined them to slivers of land that are largely the areas that make up the present-day reserve system. In many cases, these reserve lands are in low-lying areas and offer no space for Indigenous communities to employ the adaptive strategies, such as seasonal relocation, that allowed them to live successfully in the region for many millennia.

At the same time, settlers were encouraged to homestead and take up European agricultural activities (cultivation and raising of domesticated plant and animal species) across the Fraser Valley, receiving private rights of ownership from the Crown. Indigenous peoples were effectively excluded from these opportunities on what were their unceded lands, and were also no longer able to manage these lands for their cultural and economic wellbeing as they had before colonization.

2) Prior to the Fraser freshet floods of 1894 that inundated the town of Mission and other colonial settlements, larger scale diking had been constructed along the Lower Fraser River to protect towns and farm lands, although it wasn’t quite high enough in 1894. In 1924, Semá:th Xo:tsa, also known as Sumas Lake, was drained, so that the lakebed could be used for more farmland. This included the diversion and channelization of waterways, such as the Vedder Canal.

As described in an earlier West Coast blog, Semá:th Xo:tsa, with its rich resources, was of vital cultural and economic importance to the Semá:th people and was a gathering place for many Coast Salish nations as well, and its loss is still felt.

3) Further flooding was experienced along the Fraser in the spring of 1948, which led to federal intervention and funding, and the construction of the diking system that is largely still in place today. The work was completed in just over a year. Despite all the diking construction, amounting now to hundreds of kilometres of dikes, some reserve lands were left on the water side of dikes, where they have remained until the present.

The 1948 diking system was quite extensive, but rarely tested due to the relative lack of large flood events since 1948 (partly because of luck). Combined with dispersed responsibility for dike maintenance (split between local governments, local diking authorities, and in some cases ‘orphan’ dikes with no responsible authority), this has led to a lack of oversight of this system from an integrated, regional perspective.

In addition, a provincially sponsored study in 2015 identified that more than 90% of dikes would not meet current standards, much less be ready for a changing climate, and, importantly, that repairs and upgrades were likely to be “prohibitively expensive.” This study received some public air time during the November 2021 events, but accountability for addressing the findings is entirely unclear.

4) In the 1970s the Agricultural Land Reserve (ALR) was created, with the objective of protecting agricultural lands from urbanization and industrialization. Designation of ALR lands was based on soil and climate, without consideration of flood risks, or how the lands had previously been managed by Indigenous peoples.

For the most part, the ALR has protected the designated lands as farm lands in the Lower Fraser. While this protection led to incidental environmental benefits, such as inclusion of small waterways and natural breaks, over time these have largely been lost to more intensive and industrial farming practices. Riparian protection, required in urban and industrial areas, is not required in the ALR, meaning the lands are also not buffered in any way from rising waters. As well, when farm lands flood they introduce contaminants from fertilizers and pesticides into waterways.

5) In 2003, the Province downloaded floodplain management to local governments, by creating new provisions in the Local Government Act that empower local governments to designate floodplains and apply restrictions to development in those areas. Comparing the floodplain bylaws of the Fraser Valley Regional District and the City of Chilliwack with the extent of the November floods, it appears that lands behind dikes are not necessarily managed as floodplains by local governments – even though they can flood when dikes fail.

Further, by default local governments are responsible for protecting regionally important critical infrastructure where it runs through communities, such as highways, hydro lines, and other infrastructure, but without specific direction, compensation or input into decision-making about that infrastructure and its resilience.

6) And finally, the Compensation Disaster Financial Assistance Regulation under the Emergency Program Act requires that any funds paid out to compensate local governments, businesses and private owners for non-insured losses in the case of a disaster are used only to restore structures to their previous condition. It is not possible, for example, to re-size a culvert to address climate impacts, nor is it possible to replace a structure with an alternative measure, such as a nature-based approach.

These colonial decisions add up to a status quo that entrenches inequities and outdated land use and flood management practices. Siloes in management create barriers to more integrated and strategic consideration of options, and a lack of accountability overall. Together, the enduring legacy of these decisions holds us back from setting course toward a more resilient future.

Looking to the future – Building back better together

As part of the Build Back Better Together (BBBT) Collaborative, we helped to convene a forum in July 2022 in Abbotsford, in the heart of Semá:th territory. The forum was attended by leadership from 16 Indigenous nations and 14 local governments, along with BC Minister of Public Safety Mike Farnworth, Union of BC Indian Chiefs Secretary-Treasurer and Neskonlith Chief Kukpi7 Judy Wilson, and a number of other federal and provincial representatives. The meeting was co-chaired by Tyrone McNeil, Sto:lo Hereditary Chief and Chair of the Emergency Planning Secretariat, and Jason Lum, Chilliwack Councillor and Chair of the Fraser Valley Regional District.

One goal of the forum was to start in a good way by finding common ground and identifying shared principles for cooperation and collaboration in the Lower Fraser.

After an afternoon of dialogue, it was clear that there is a shared desire among Indigenous and local government leadership in the Lower Fraser for greater accountability from provincial and federal governments, and for funding and policy that more effectively supports regional and local needs.

There was a willingness to work on reconciliation and making the implementation of the Declaration on the Rights of Indigenous Peoples a reality, but a recognition that this work is not adequately supported by current funding and policies that drive actions in the floodplain. There was also interest in using nature-based approaches to better manage relationships with water, but it was acknowledged that nature-based work is made challenging by siloes in government, knowledge gaps and an emphasis on hard infrastructure.

The principles that were discussed and broadly supported included:

The BBBT collaborative did our best to capture the rich discussion from the forum in this report. As follow-up items, we committed to identify key provincial and federal actions that could address some of the problems identified by forum guests, and to convene another forum (currently planned for January/February 2023).

There are no easy answers for the Lower Fraser – the floodplain is a busy, crowded landscape, and its current governance is shaped by colonial decisions that need to be reckoned with. At the same time, the leadership and the willingness to work together that was displayed in this past summer’s forum gives us hope for the future of the Lower Fraser floodplain.

One year after the devastating flood events of November 2021, there has been a lot of talk about recovery, and “getting back to normal.” But what does “normal” mean in the Lower Fraser floodplain?

Before the 2021 floods, “normal” for many people was living without any knowledge of the risks associated with decisions made by planners, developers, governments, colonial authorities and settlers that have produced the current precarious configuration of occupation and land use in the Lower Fraser. As we build back better together, let’s acknowledge the truth of where we are today so we can go forward in a different and better way.

While the focus often ends up, understandably, on water – especially when it moves suddenly and surprisingly – what we really need to be looking at is how we manage ourselves, our relationships to each other, to other species, and to the realities of the shared landscape where we live.

As the Province develops a new Flood Strategy, and modernizes the Emergency Program Act, it will be necessary to pay attention to the ways that the colonial legacy of the Lower Fraser can derail or lessen the impact of the good ideas that have been put forward, and to reform or adapt many of these laws and regulations as well.

The Province is currently inviting public input on its proposed Flood Strategy until January 6, 2023. This is a good opportunity to share your views with the BC government and urge decision-makers to align the strategy with the approach put forward by the Build Back Better Together Collaborative. Learn more and submit your input at engage.gov.bc.ca/bcfloodstrategy.

Top photo: Province of BC via Flickr Creative Commons