Field notes: A week of pipeline action and cross-Canada solidarity 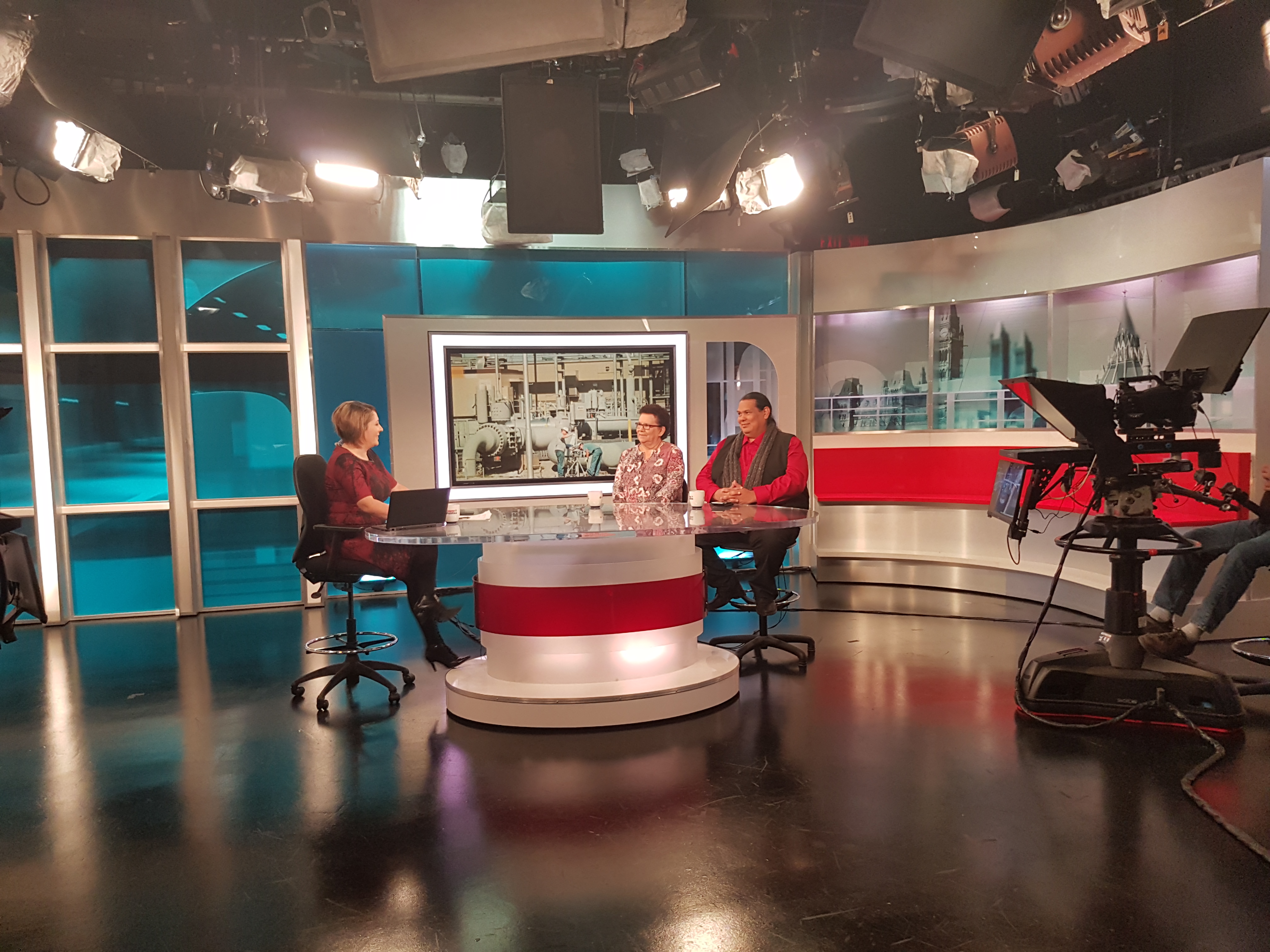 This is your friend Eugene, blogging from 9,753 metres in the sky.

I’m writing on my way home after a full and intense week. According to the map, we are above Treaty 1 territory, somewhere between Winnipeg and Brandon, MB. A Tribe Called Red’s incredible new album, We Are the Halluci Nation, is blasting in my ear.

My action-packed week started last Sunday morning, when I flew to Ottawa to support a series of Tsleil-Waututh Nation (TWN) meetings and media events on Kinder Morgan’s Trans Mountain Expansion.

We had been hearing rumours that the federal decision on Kinder Morgan might be announced earlier than the government-imposed deadline of December 19. Those rumours were bolstered by the fact that federal decision deadlines for Enbridge’s Northern Gateway and Line 3 pipeline proposals had passed without announcement, fueling the suspicion that Prime Minister Trudeau and his cabinet might try to stack a series of pipeline announcements in an attempt to appear balanced. And so, I packed my bags and joined the TWN team in Ottawa.

Following a meeting with federal Ministers, we met up with TWN leaders on Parliament Hill, where we spoke to media in the parliamentary press gallery. In the press conference, Chief Maureen Thomas and Rueben George, backed by TWN youth and members, announced that they had provided four key expert reports to Minister Carr, who promised to present them to Cabinet. The expert reports affirmed that a spill was likely; that it couldn’t be cleaned up; that the effects would be devastating; and that the pipeline was neither necessary nor the economic boon that many have assumed.

TWN representatives continued to field media interviews – from CBC’s Power and Politics to the New York Times, and magazines across the continent. While in the Power and Politics studio, I got a message from former host Evan Solomon, who was seeking information for an article in Maclean’s magazine.

That evening Rueben and I flew to Treaty 1 territory in Winnipeg, unsure what the next day would bring.

On Tuesday morning, we attended a previously scheduled meeting hosted by Grand Chief Derek Nepinak and the Association of Manitoba Chiefs. The three-day meeting on climate change was to start with a full day discussion about the Treaty Alliance Against Tar Sands Expansion, but we were also expecting a decision on Kinder Morgan and the Enbridge pipelines. It was all a bit surreal.

The day itself started off well. Dr. David Suzuki gave an inspiring keynote presentation about what he had learned about environmental values from Indigenous people. Rueben George, Grand Chief Serge Simon of the Kanesatake Mohawks, Grand Chief Stewart Phillip of the Union of BC Indian Chiefs (UBCIC) all gave rousing and inspiring talks about why they were committed to the Treaty Alliance and the unprecedented unity amongst Indigenous peoples that it represented. 350.org campaigner Clayton Thomas Muller delivered the afternoon keynote about the transition to renewables, and the crucial role of Indigenous peoples in that transition.

The Treaty Alliance held a signing ceremony and announced that it had surpassed 100 signatories, each dedicated to stopping Tar Sands Expansion and supporting each others’ fights.

By that point, we knew that the Prime Minister and his Cabinet were going to make an announcement at 3:30 p.m. local time. The climate meetings had wrapped up for the day, and most of the delegates had left the convention centre. A few media cameras stuck around until decision time to capture the reaction of the diverse leadership in the room.

In preparation for this major milestone following years of work against Kinder Morgan, we huddled around a laptop and watched the livestream in the otherwise empty convention centre ballroom.

Just before Cabinet took the stage, I received a text message from our team in Ottawa confirming that Kinder Morgan and Line 3 would be approved, while Enbridge Northern Gateway would finally die.

It was not a shock, to be honest – Trudeau and Carr had been signaling support for Kinder Morgan even before the election last year. But my heart still sank. As Grand Chief Phillip told me in conversation later,

“It’s like watching a sick relative die. You know it’s coming, and you can prepare yourself mentally, but when it happens, it still feels like a kick in the gut.”

What did surprise me was the smug and out-of-touch tone of the announcement. Incredibly, Cabinet relied almost exclusively on the flawed National Energy Board (NEB) report, including the blanket adoption of its toothless conditions, without improvement or alteration. The six key questions posed by the government’s own Ministerial Panel were ignored, as if they didn’t even exist. Absurd statements about confidence in the project’s safety for BC’s south coast, and that the decision was not about politics, were met with awkward laughter.

The Treaty Alliance responded to the numerous reporters who had gathered with dignity, defiance and determination. After the short and impromptu press conference, we headed to the airport to travel back to Ottawa.

Much has been written and said about the decision since then. You can read a few of the most pertinent articles here, here and here.

As our Executive Director and Senior Counsel Jessica Clogg has said: the rejection of Northern Gateway is proof that Kinder Morgan can be stopped.

I didn’t sleep particularly well or long that evening in Ottawa, and woke up bright and early to attend a rally at the Supreme Court of Canada. The case, Clyde River and Chippewas of the Thames is an important case involving two First Nations (from Nunavut and Ontario) appealing separate National Energy Board decisions.

The key legal issue is the correct role of the NEB in deciding upon and discharging the duty to consult First Nations about decisions that will affect them, which in turn will affect how decisions about resource and infrastructure projects are made in Canada. After witnessing firsthand how mightily the Board had struggled in the Kinder Morgan review process, I was compelled to attend the case and support the nations, while satisfying my inner law nerd at the Supreme Court.

After a difficult Tuesday, I was inspired by the determination of the people of Clyde River and Chippewas of the Thames, supported by hundreds of non-Indigenous people who had travelled to Ottawa in solidarity. It is not hard to imagine being back at the Supreme Court to fight back against Kinder Morgan. We will be watching closely in the following months for the Court’s decision.

A massive wampam belt was brought to the SCC as hundreds rallied outside. Photo: Eugene Kung

On Thursday and Friday I was in Toronto (Mississaugas of the New Credit First Nation territory). After Cabinet’s approval of Kinder Morgan just two days earlier, I was more determined than ever to continue our work to change the rules of the game and improve the way decisions are made about pipelines, resource extraction and infrastructure.

Trudeau was elected on promises to fix Canada’s gutted environmental laws, to redo the Kinder Morgan review process, to be a climate leader and reset the relationship with Indigenous peoples. That was why it was so frustrating to see him approve Kinder Morgan, using the NEB’s flawed report, in the face of strong Indigenous opposition.

West Coast has been working tirelessly to fix our environmental laws, and right now the federal government is reviewing its environmental assessment law and processes, the Fisheries Act, Navigation Protection Act and the National Energy Board. Our meeting in Toronto brought together some of Canada’s brightest thinkers to catch up on the work we were doing on NEB modernization.

Polls show that many Canadians understand that the NEB is broken. Its original function – to provide a forum in which government and industry could discuss how to get Canadian resources to market – is outdated. Energy regulators must now consider Aboriginal consultation, as the Supreme Court is now pondering in the Clyde River and Chippewas of the Thames case, and it’s a role that the NEB recently stated it was ill suited to conduct.

The interest in public participation regarding projects like pipelines has never been higher, yet regulatory changes under the previous government have made it harder for the public to participate. And the NEB has thus far refused to consider climate impacts, despite overseeing industries that represent more than a quarter of Canada’s GHG emissions. In short, the NEB has struggled under the strain of a much broader mandate.

We saw this firsthand in the NEB’s mangling of the Kinder Morgan file; unbelievably, it was even worse in its handling of the Energy East process. The Office of the Auditor General released a report less than a year ago, which found that the NEB was unable to track, let alone enforce, the conditions it imposes on industrial development. There are good reasons why Canadians don’t trust the NEB.

So our task is to try and fix it – to change the way these important decisions that will affect Canadians and Indigenous peoples for generations are made; to provide a constructive and useful path forward toward a just and equitable energy future. We can’t do it without our supporters – you can find updates and information on how to participate via our Environmental Laws Matter website.

As I reflect back on this week, flying somewhere above the Rocky Mountains, I feel a mix of emotions: pride (in our team and the global movement we are part of), disappointment (in our Prime Minister and Cabinet), but mostly determination.

Last Tuesday’s announcement was just the start of the next phase of the fight to stop Kinder Morgan, and as we continue that fight, we will also continue our work to change the rules of the game.

Climate and Energy
Indigenous Law
Back to top