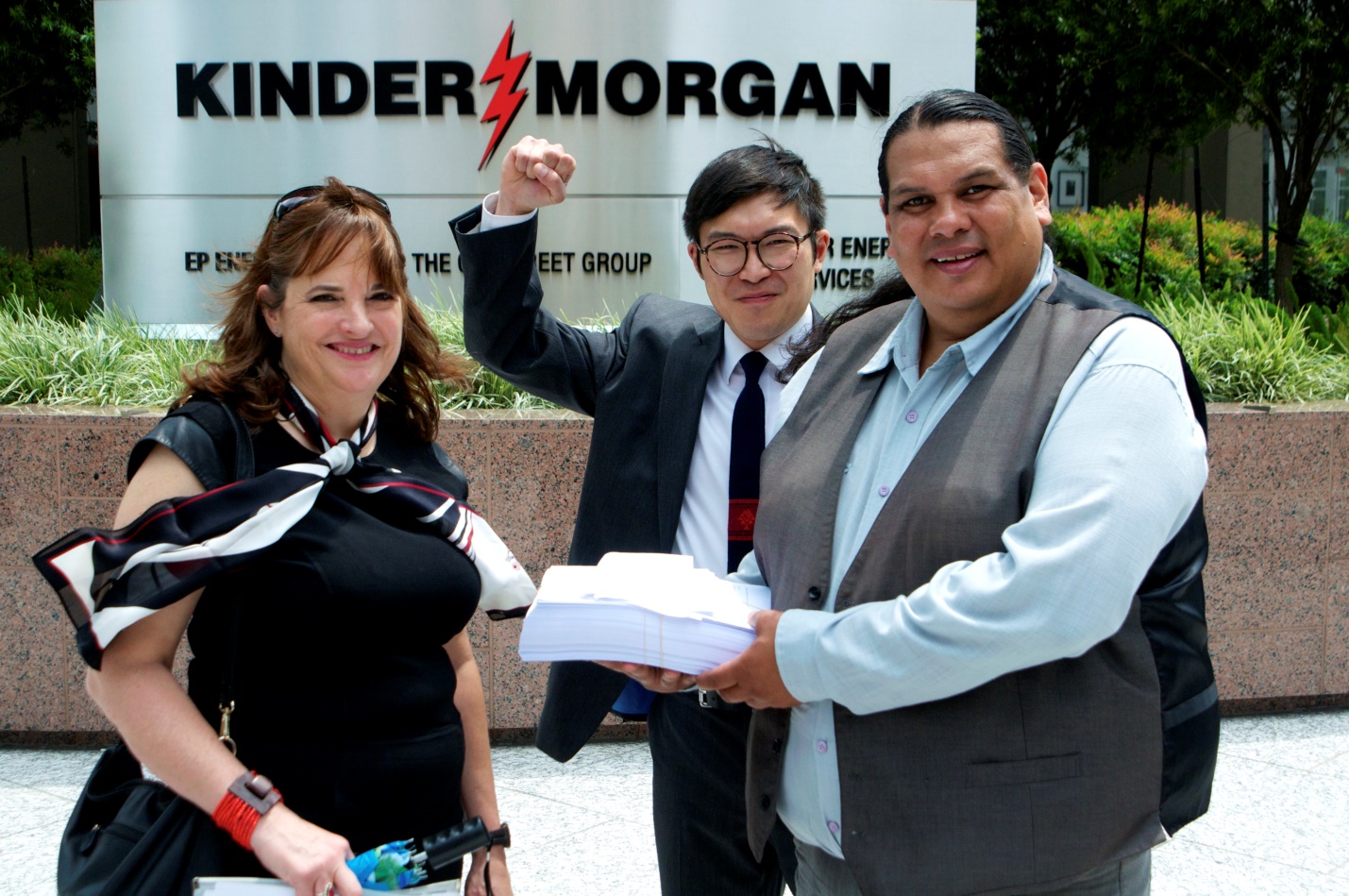 In the past two weeks, I embarked on something of a radical carbon offset program as one part of the growing mass movement to stop the Kinder Morgan Trans Mountain expansion. In the process we will slow the expansion of the Alberta Tar Sands, which we now know needs to remain largely in the ground if we are to avoid catastrophic climate change.

I traveled with Tsleil-Waututh Nation leadership across the continent, first to New York City, then to Houston, Texas to support their work in speaking truth to power. The power in this case was Kinder Morgan Inc. (KMI), and its major institutional investors. The message? Investors need to understand that the Kinder Morgan Trans Mountain expansion is a legally and financially risky project that will face ongoing challenges and delays in the face of concerted opposition from First Nations and allies.

The trip started off with a visit to New York City where we attended a side meeting of the UN Permanent Forum on the Rights of Indigenous peoples. The Shareholder Activism and Leadership Training (SALT) program was offered by First People’s Worldwide, an Indigenous organization dedicated to facilitating the use of traditional Indigenous knowledge in solving today’s challenges, including climate change, food security, medicine, governance and sustainable development. It included important strategic and analytical tools and included participants from Guatemala, Mexico, Kenya, the US, Canada and Australia.

In the days following the training, we held a series of meetings with Kinder Morgan’s major institutional investors who collectively owned $10B in KMI stock, representing more than 10% of their total shares. We found ourselves in places I never imagined myself: the boardrooms of Goldman Sachs, JP Morgan and Bloomberg, among others.

A key element to securing these meetings was our research and knowledge around KMI’s Annual Meeting of Stockholders (AGM), and some of the shareholder resolutions that were up for vote. In particular, shareholders had proposed that Kinder Morgan conduct a Carbon Asset Risk Assessment in light of the reality of climate change and climate policy; and a Sustainability Report evaluating the company’s environmental, social and business practices, which would give investors a clearer understanding of the risks and uncertainty that things such as TWN’s opposition (and that of the larger community) pose to the KMX pipeline project and other projects.

The meetings were led by TWN Chief Maureen Thomas who outlined TWN’s story, and the critical importance of the Salish Sea and Burrard Inlet to their culture, spirituality, economy and identity. In particular, Chief Thomas spoke powerfully about how TWN’s contemporary economic activities such as their market housing development and eco-tourism company were also at risk with the KMX project. Chief Thomas shared a map outlining the existing industrial development in Burrard Inlet, and lamented the loss of traditional foods such as shellfish as a clear sign that the inlet had reached a level of industrial development that exceeded levels permitted by TWN’s indigenous laws. As Chief Thomas put it “this is about our survival as a people.”

TWN partnered with West Coast and SumOfUs.org to hold these meetings. SumOfUs’ shareholder activism manager Lisa Lindsley was instrumental in securing the meetings and shared the importance of understanding the risk and uncertainty facing the project. I supported the meetings by discussing the Canadian legal landscape, and in particular the guidance regarding First Nations consent from the Supreme Court of Canada, following last year’s landmark Tsilhqot’in decision. There was significant interest in the legal tools that First Nations have to oppose controversial projects such as KMX and the risk and uncertainty that it represents to investors.

Our meetings also resulted in invitations to the Annual Meeting of Stockholders, which was to be held the following week in Texas. Overall, we were treated with respect and were supported and encouraged by some of Kinder Morgan’s largest institutional shareholders. As Chief Thomas stated at the end of some of the meetings “Now you know that we are human beings; and now we know that you are too.”

In the days leading up to the AGM, TWN and SumOfUs.org launched an online petition to garner support for TWN’s work. In an incredible display of support and solidarity, they collected over 60,000 signatures in 48 hours telling Kinder Morgan to:

The results were overwhelming as I set off for the Houston with Rueben George of TWN.

We arrived in Houston late in the evening, and immediately felt the sticky, humid and hot climate. The next morning, we gathered our things and headed to Kinder Morgan’s headquarters in downtown Houston. As we entered the imposing building, I noted more than a dozen security guards scattered around watching our every move.

Rueben and Lisa had secured proxies to enter the meeting. Our attempts for me to gain entry as a guest, as set out in KMI’s rules were thwarted and I was denied entry. Instead, I paced around outside like an expecting father in a waiting room for one of the longest hours of my life.

Inside the meeting, Lisa and Rueben’s time was cut by 50% from 3 minutes to 2 minutes. Nevertheless, the message was clear: Rueben George looked Richard Kinder in the eyes and said: "I am here to let you know that the Tsleil-Waututh will never consent to the Trans Mountain project — because it will destroy our culture, our way of life and our spirituality…we have the legal tools…[and] will do whatever it takes to stop it.”

Rueben concluded by stating that TWN was not alone – that many First Nations were also opposed, that the vast majority of Vancouver area residents supported them, and presented a thick stack of papers containing the 60,000 signatures that they had collected in the previous two days.

Following the 45 minute meeting, Rueben and Lisa were followed by security until they left. Some shareholders in attendance thanked them for their presentation and wanted to know more. Others were less friendly.

Houston we have a problem: A Toxic Tour of Houston Ship Channel

With a number of hours before our flight home, we connected with two friends I made at last year’s Tar Sands Healing Walk – Bryan and Juan Parras of the Texas Environmental Justice Advocacy Services (TEJAS). TEJAS is dedicated to supporting the communities who live on the front lines and bear the disproportionate impacts of oil refineries and chemical processes.

Juan took us on a tour of one of the most affected communities in Texas, the neighbourhood of Manchester which is ground zero for the petrochemical sacrifice zone around the Houston Ship Channel, which has more than 400 chemical manufacturing facilities and 2 of the largest refineries in the US.

Like our visit to the Tar Sands, words cannot describe the scene and smell of the area. The primarily Latino community is completely surrounded by industry and is a clear example of environmental racism. On its north, east and southeast sides are two refineries, one owned by Valero, and the other by LyndonBasell. There is a Texas Petrochemical plant to the south; a fertilizer plant and metal shredding facility (with associated asbestos and other toxics in the air) to the west; a wastewater treatment facility to the east; a Goodyear tire plant and interstate highway cutting through the south east, and an industrial rail yard to the south. We saw houses literally next door to refineries and industrial buildings.

The families and children who live in the area are exposed on a daily basis to at least 8 identified known human carcinogens, including benzene and formaldehyde, and as a result have predictably and tragically high instances of leukemia, asthma and a host of other health issues.

It was devastating to see the level of destruction in the petrochemical sacrifice zone surrounding the Houston ship channel. However, it shed some light on why the decision makers in downtown Houston towers might not care about the beauty of Burrard Inlet, when they were content to destroy their own back yard in the pursuit of profit and at the expense of the health of the communities who live there.

I was reminded of Chief Thomas’ words in our New York meetings about how Burrard Inlet had already surpassed a level of industrial development that was acceptable under Tsleil-Waututh law. But it was also a powerful reminder of what could happen if we do not do everything we can to fight to protect the inlet and the clean water and air that we all rely upon to survive.

Two sides of the tracks in Manchester, Houston. On one side the towers of Houston’s downtown core form the skyline. On the other, a refinery creates a similar silhouette. Photo: Eugene Kung

We returned home exhausted but happy. Social media had blown up with the images of our trip to Texas and we carried the support of 60,000 people with us.

One of the interesting things about trying to stop a linear project like a pipeline is that it needs to be 100% complete before it is 1% effective. This is something we reminded Kinder Morgan and their investors in every meeting. The significance of TWN’s opposition, grounded in their own laws, but further enhanced by Canadian legal tools should not be underestimated. But the impact of our work was strengthened and amplified by the support and solidarity of the thousands of people who support TWN’s work. We are truly building a movement that is not about saving our own backyards, but is inextricably connected to the tar sands and the grave threat they pose to a stable climate that we all depend on for ourselves and our future generations. It’s not just about the environment but environmental justice.